A prototype for mechanizing the asphalt roofing process was developed. In this manuscript, we present the design, manufacturing, preliminary thermal test, and operation test of the equipment. The innovation is sustained by the use of infrared radiators instead of fuel burners. Infrared heaters provide optimal clean heat transfer to asphalt rolls in comparison to fuel burner automated systems since the latter generates a significant amount of CO2, SO2, and other non-ecofriendly emissions close to workers. Moreover, the equipment has several advantages with respect to manual installation, such as roofing capacity, cleanness, safety, uniformity, and environment-friendliness. It demonstrates an installation speed of 1 m/min, on average, for 3 kg/m2 rolls, which leads to around 400–420 m2 per person a day, more than the usual manual roofing rate. However, there are some issues that need to be resolved, such as inaccurate unrolling and/or bad adhesion gaps.
Keywords: infrared heating; asphalt roofing; heating equipment infrared heating; asphalt roofing; heating equipment

The present equipment refers to a lightweight trolley mechanism that facilitates the installation of asphalt rolls. The equipment is composed of the following elements: a light trolley structure, four wheels for supporting the trolley, an auxiliary wheel for unrolling, a system of infrared heaters, a top enclosure cover to avoid heat loss, small drum rollers for compaction of the asphalt in the overlaps, and general electrical regulators and switches.

3. Manufacturing and Assembly of the Prototype

The prototype was constructed following the aforementioned design. The use of normalized aluminium profiles allowed for the realization of small and fast adjustments and/or modifications to correctly fit the rest of the parts.
First, the prototype main frame and the auxiliary wheel mechanism were built (Figure 9). This main frame has two lateral stops in order to keep the roll within the trolley and to limit the degrees of freedom when unrolling.
Second, infrared heaters were mounted on other aluminium profile frames (Figure 10). These sub-frames also permitted the performance of some preliminary thermal tests. Four heaters were installed together.
Then, two small heavy drums were attached to the trolley with a crank for ensuring the adherence on the overlaps (Figure 11). The drums were made of four weights of 2 kg each, which can be easily removed from the trolley by a nut-fastening connection. Drums were free to roll over the asphalt roll and their weights were fully acting on the ground and not on the trolley.
Then the two sub-frames were attached to the main frame around the roll. Finally, an electrical connection for each of the infrared heaters was carried out. All sockets were linked to two multi-socket adaptors. A small connection box linked the multi-socket adaptors to a three-phase hose and its corresponding socket. A photograph of the finalized prototype is shown in Figure 12.

A preliminary temperature test was done to validate the temperature criteria selected during thermal design. For this test, one of the sub-frames containing four infrared heaters was placed above a sheet of asphalt roll just to heat it up (Figure 13). Then, heaters were activated and the sample of asphalt was heated.
After one minute of heating, the sample of asphalt roll was brought up to 166.8 °C (Figure 14). At this temperature, the asphalt was already very viscous and most of the protective thin film had already been removed. There were even some boil-off bubbles coming from the outgassing of the asphalt mass (Figure 15). This piece was adhered to the surface below very easily. Therefore, we concluded that if the top surface is at least 166.8 °C, the asphalt roll can be properly installed. This partially validated the temperature profile criteria that we supposed in Section 2.

The objective of the second test was to determine the temperature beyond which the layers adhere between themselves in the roll. For this test, a slice of the cylindrical roll was cut and located on a metal sheet surrounded by four infrared heaters (Figure 16).
Then, the four heaters were activated, and the temperature variation of the roll was registered by using thermal imaging. Each image included the time at which it was taken. Different images taken at different times are shown in Figure 17.
Since the infrared heaters were completely off, they needed almost 3 min to achieve their maximum heating power capacity. After 8 min of continuous radiation, the roll was hot and some of the outer layers had adhered together (Figure 18). After the test, we tried to separate the layers, and we determined that seven layers were merged together. These seven layers corresponded with the limit temperature indicated in clear green/blue in the last picture in Figure 17. This color corresponds to a temperature between 60 and 80 °C. Therefore, we concluded that below 60–80 °C, layers do not adhere together but above these temperatures they do. Again, this validated some of the temperature profile assumptions made in Section 2.

Once the temperature profile criteria were validated, we started to test the installation of rolls. The first test was carried out to determine the proper step-by-step planned installation method.
For this, a test ground area made of floor tiles was constructed in the laboratory. Then, the roll was placed above, and with the equipment, we started heating the roll (Figure 19). When the top surface temperature reached almost 170 °C (Figure 20) after 35 s, an installation step-ahead was done (installing 0.6 m2 per step). The uniformity of the radiated surface was admissible and the adhesion between roll and ground was satisfactory. This permitted the validation of the heating and waiting times determined in Section 2.2.
However, during this test, we realized that the unrolling precision was not so high. The mass unbalancing of the roll generated an excessive unrolling, leading to a poor installation of some areas. This was corrected by approaching the lateral stops, giving less freedom to the roll to freely unroll. Another issue came from a poor adherence of the last 1–2 cm at the lateral limits. This was due to the borders of the infrared heaters, which did not surpass the roll. In order to correct this, the heaters can be located more laterally, widely covering the roll limits.

Finally, the equipment was tested in an outdoor facility in order to demonstrate its installation capacity. The equipment was connected to a 14-kW diesel portable generator (Figure 21).
The equipment was activated, and after 2 min of infrared heater pre-warming, the installation began.
A complete asphalt roll was adhered to the ground by following the step-by-step installation procedure, as shown in Figure 22. A total of eight meters were adhered after approximately eight minutes of heating up, demonstrating the claimed speed.
However, we identified several issues with the installation and with the equipment itself. As stated previously, it is hard to accurately control the unrolling step, thus there were some asphalt strips that were not heated up. The lateral limits were also not totally adhered because of a lack of extra heat in this area. Moreover, the small pressing drums needed to be heavier in order to effectively crush the overlaps. It would be very convenient to include a chronometer or even a thermal camera that indicates to the worker the exact moment for unrolling. Last but not least, asphalt was also attached to some parts of the trolley such as the lateral stops, which must be prevented to ensure a long lifetime of the equipment.

In this article, we presented the design, manufacture, preliminary thermal test, and operation test of a new piece of equipment for mechanizing the asphalt roofing process. The equipment was small and lightweight, and included infrared radiators instead of fuel burners. This provided optimal clean heat transfer to the asphalt rolls. Moreover, the equipment had several advantages with respect to manual installation, such as roofing capacity, cleanness, safety, uniformity, and eco-friendliness.
We analyzed and experimentally validated the temperature criteria for an adequate installation asphalt roll. These criteria were: top outer temperature must reach around 170 °C and the interlayer temperature cannot be higher than 70 °C to prevent interlayer adhesions. With these criteria and with the available heating power, the heating up time to install 0.6 m2 was determined and tested as being 35 s, including the mechanical process of unrolling. This demonstrates an installation speed of 1 m/min, on average, for 3 kg/m2 rolls, which leads to around 400–420 m2 per person a day, more than the usual manual roofing rate.
However, we identified several issues with the installation and with the equipment itself, such as gaps in the adhesion due to inaccurate unrolling and excessive asphalt contamination in some parts of the equipment. The unrolling could be improved by changing the lateral stops or by adding another type of unrolling system. To prevent the adhesion of the asphalt to the equipment, it should be covered by a non-stick coating. Another option could be to move the heaters away from the roll, at the expense of losing some heating power.

The research leading to these results was partially funded by Ingeniería Industrial Ibérica S.A. and Cubiertas ALMADI 2017 S.L. 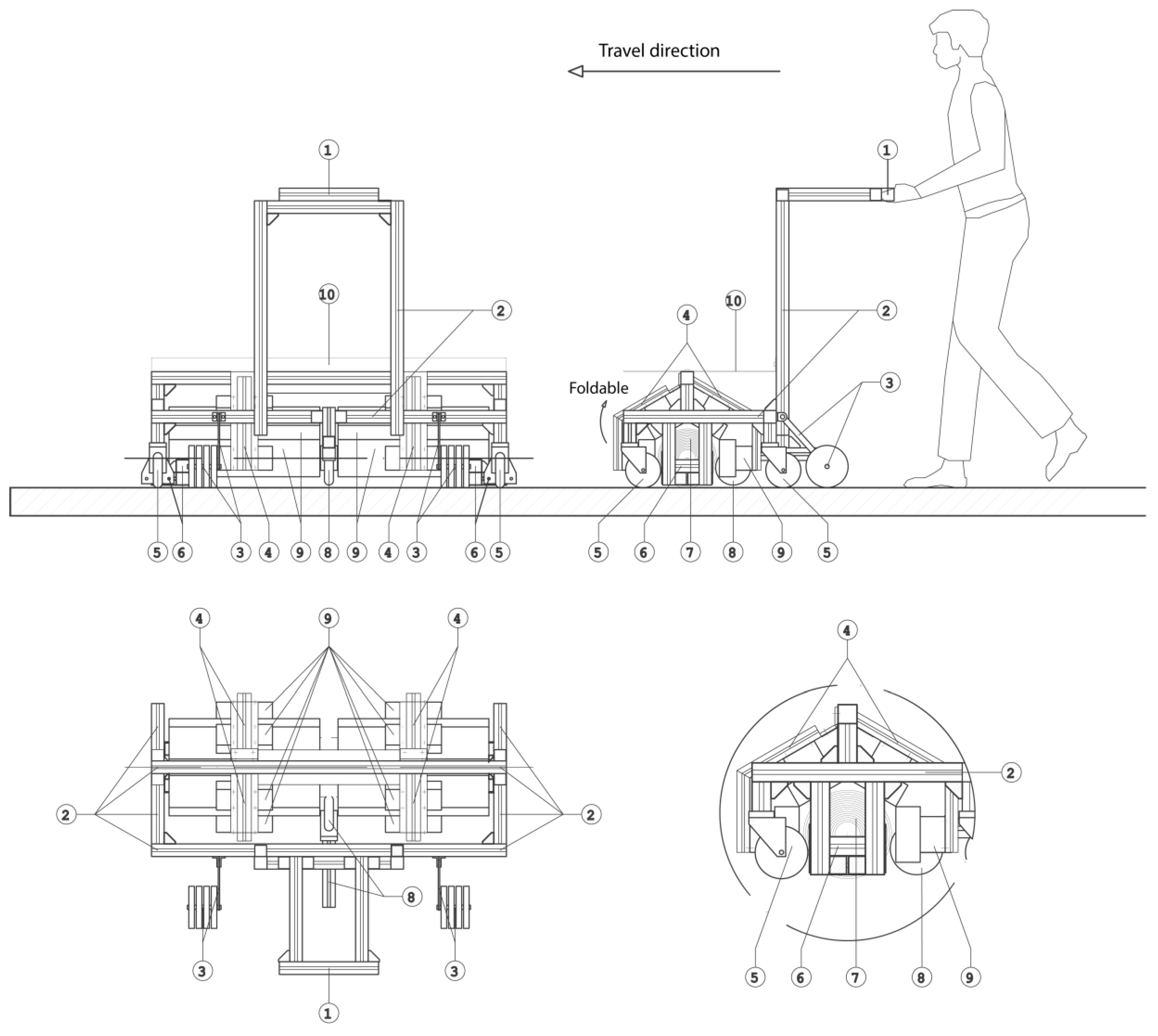 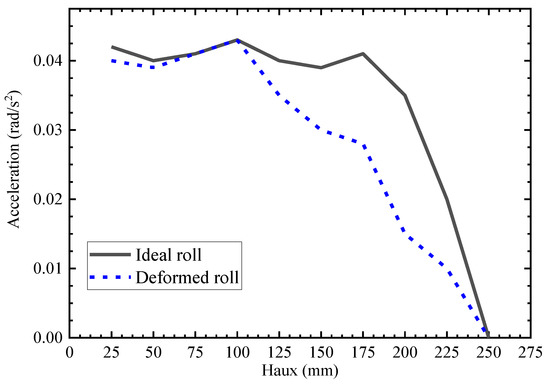 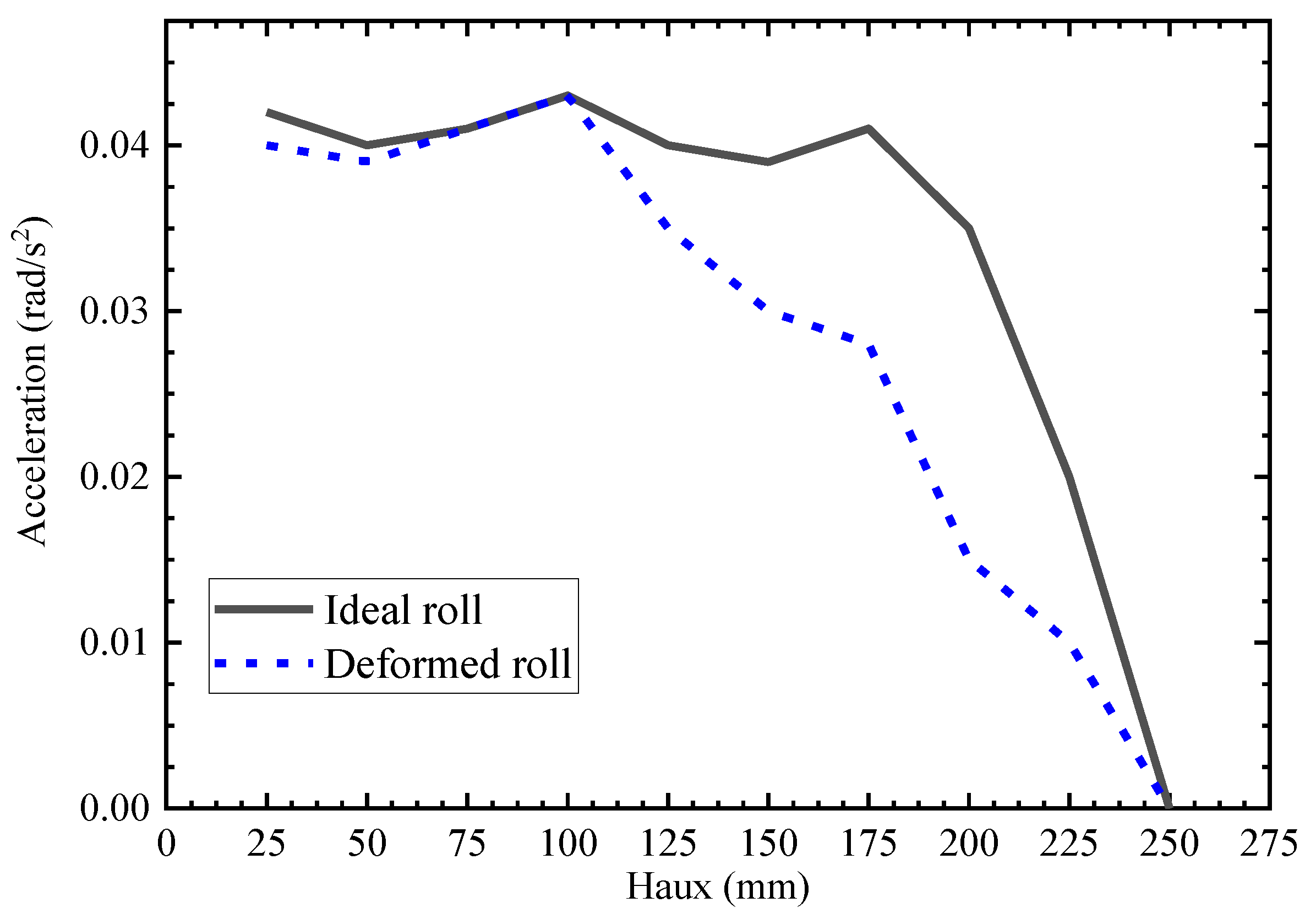 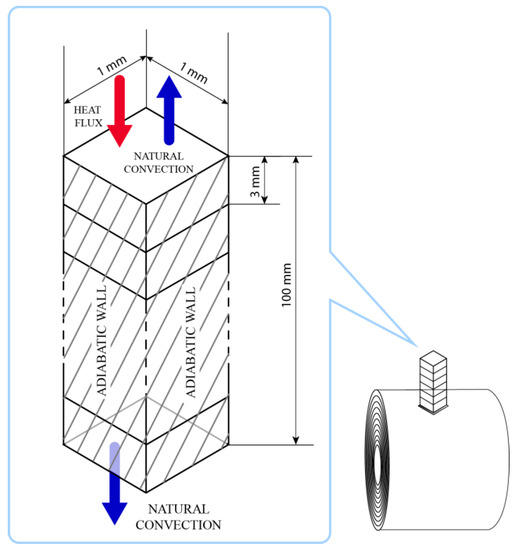 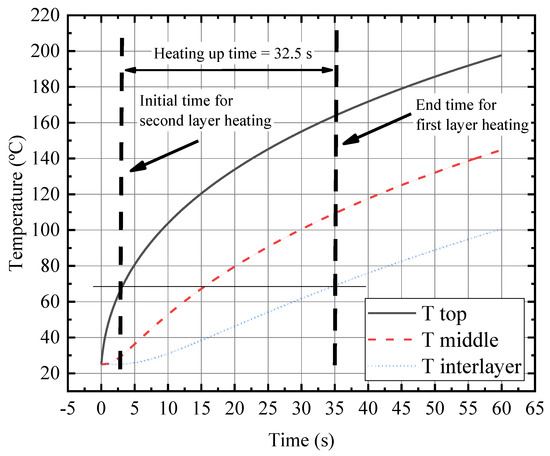 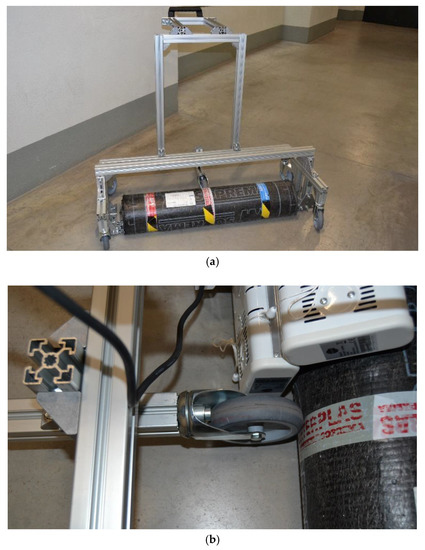 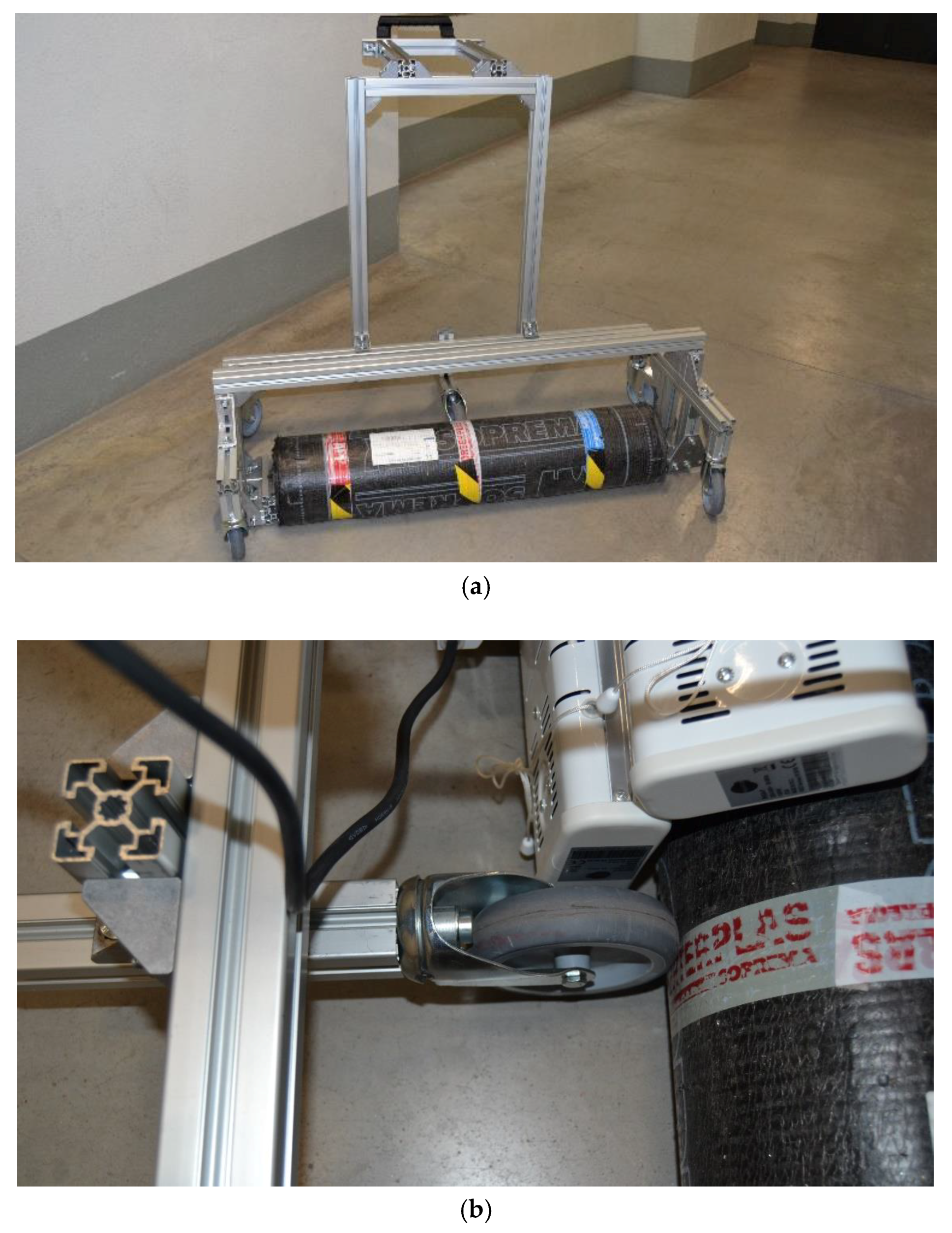 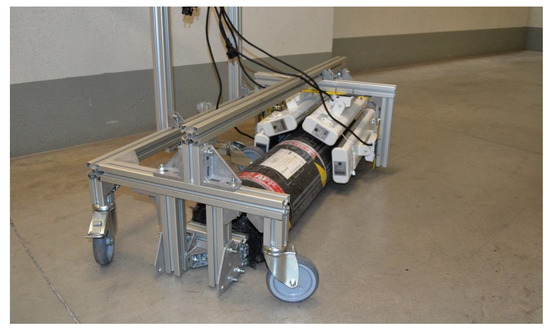 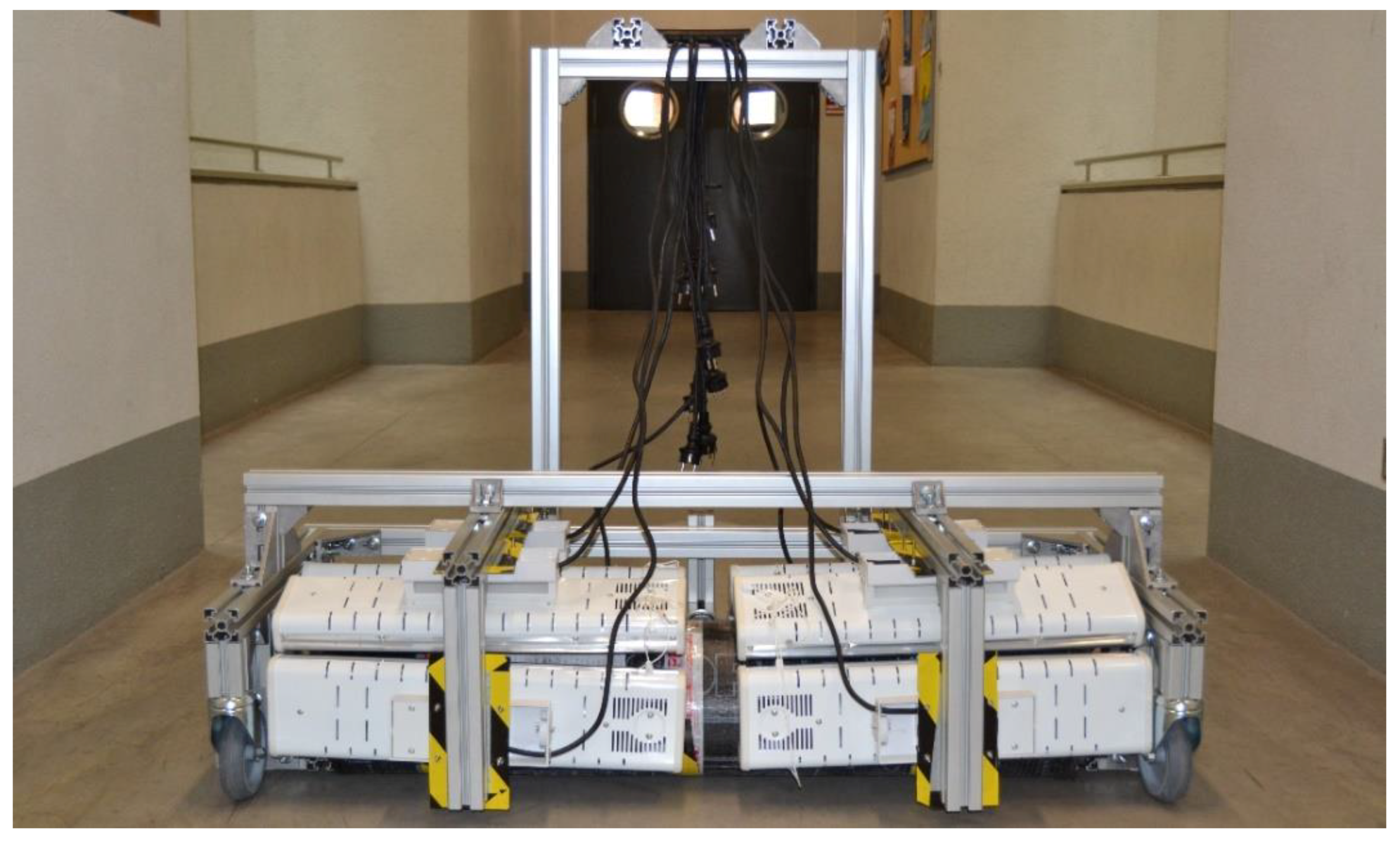 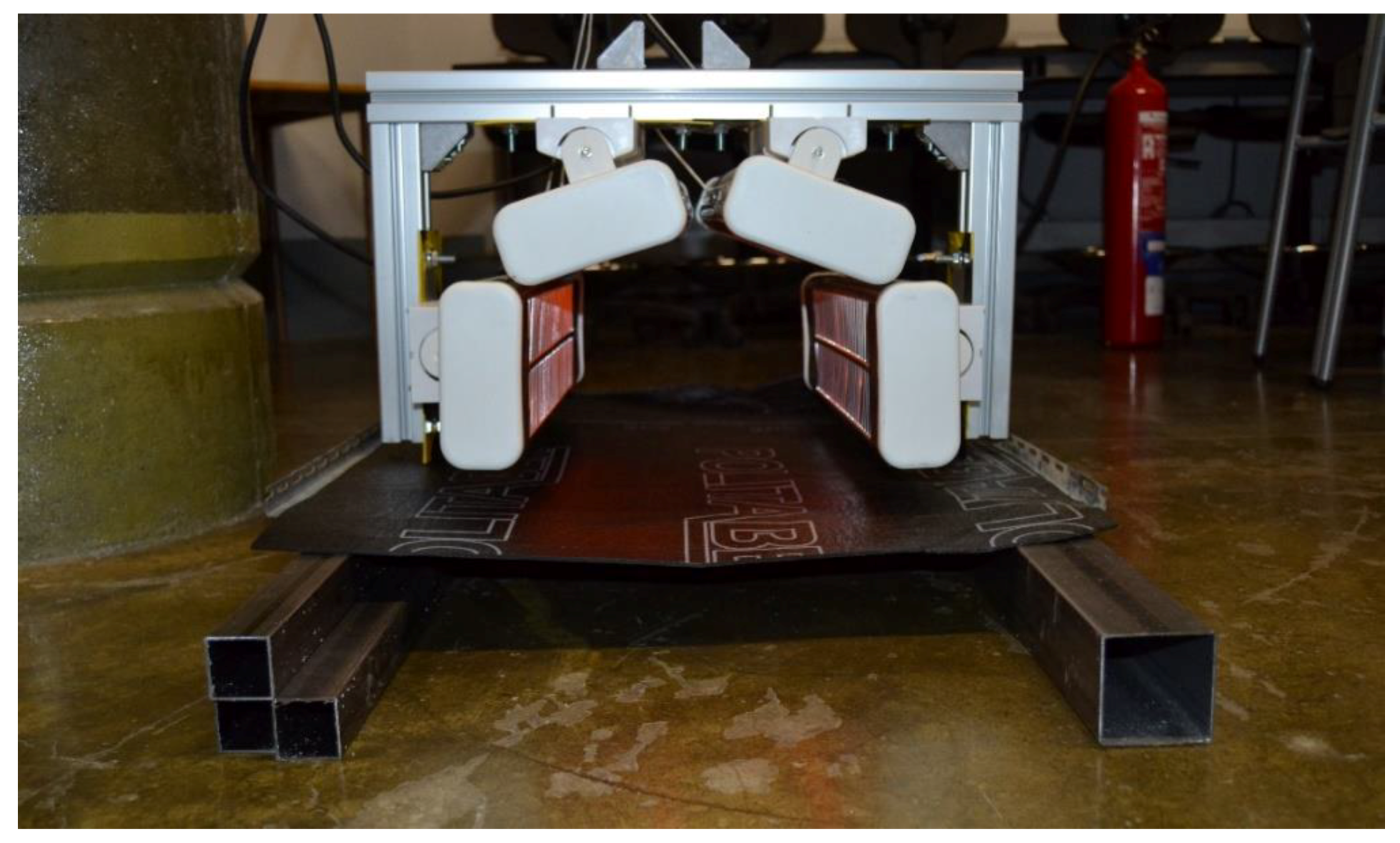 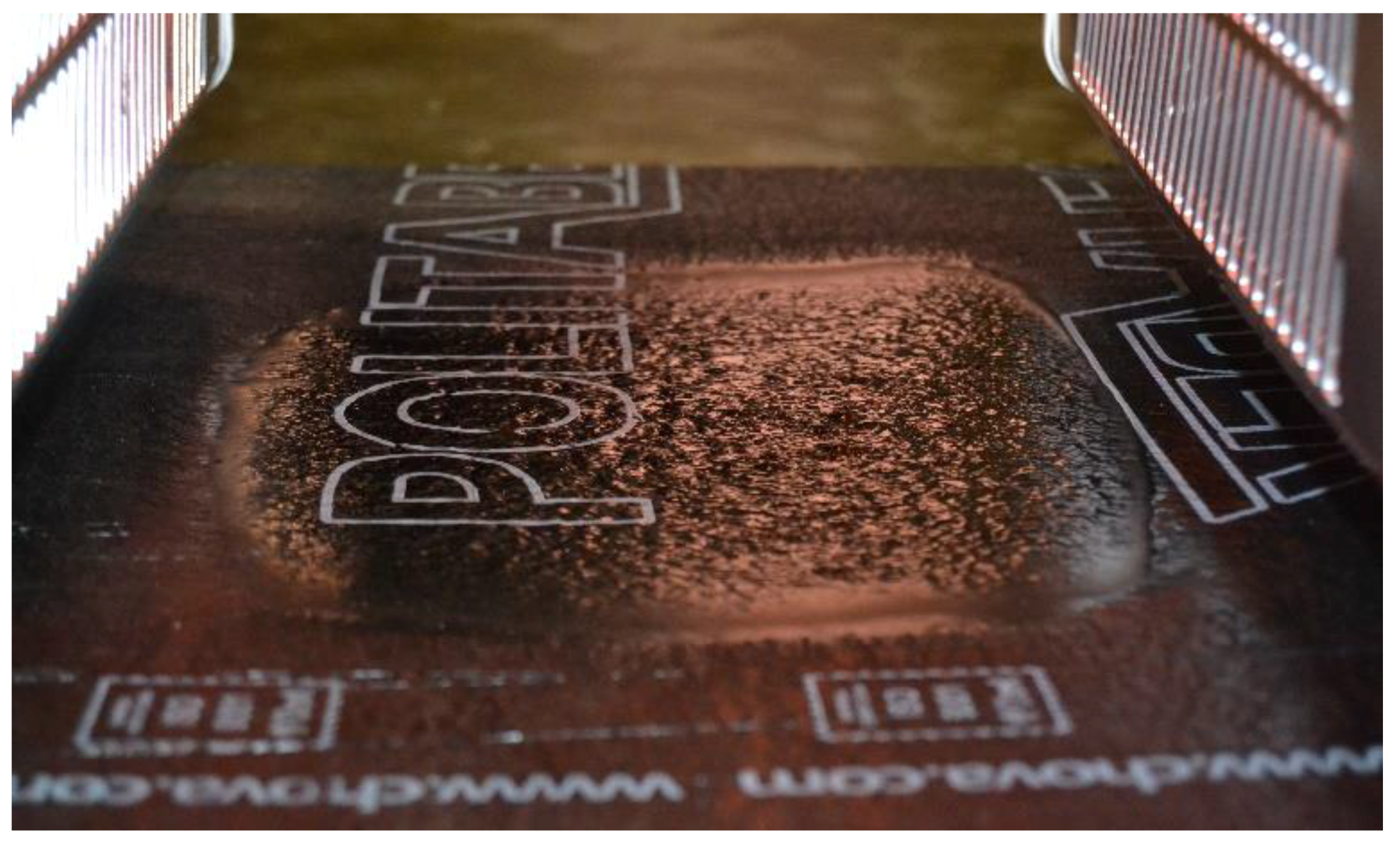 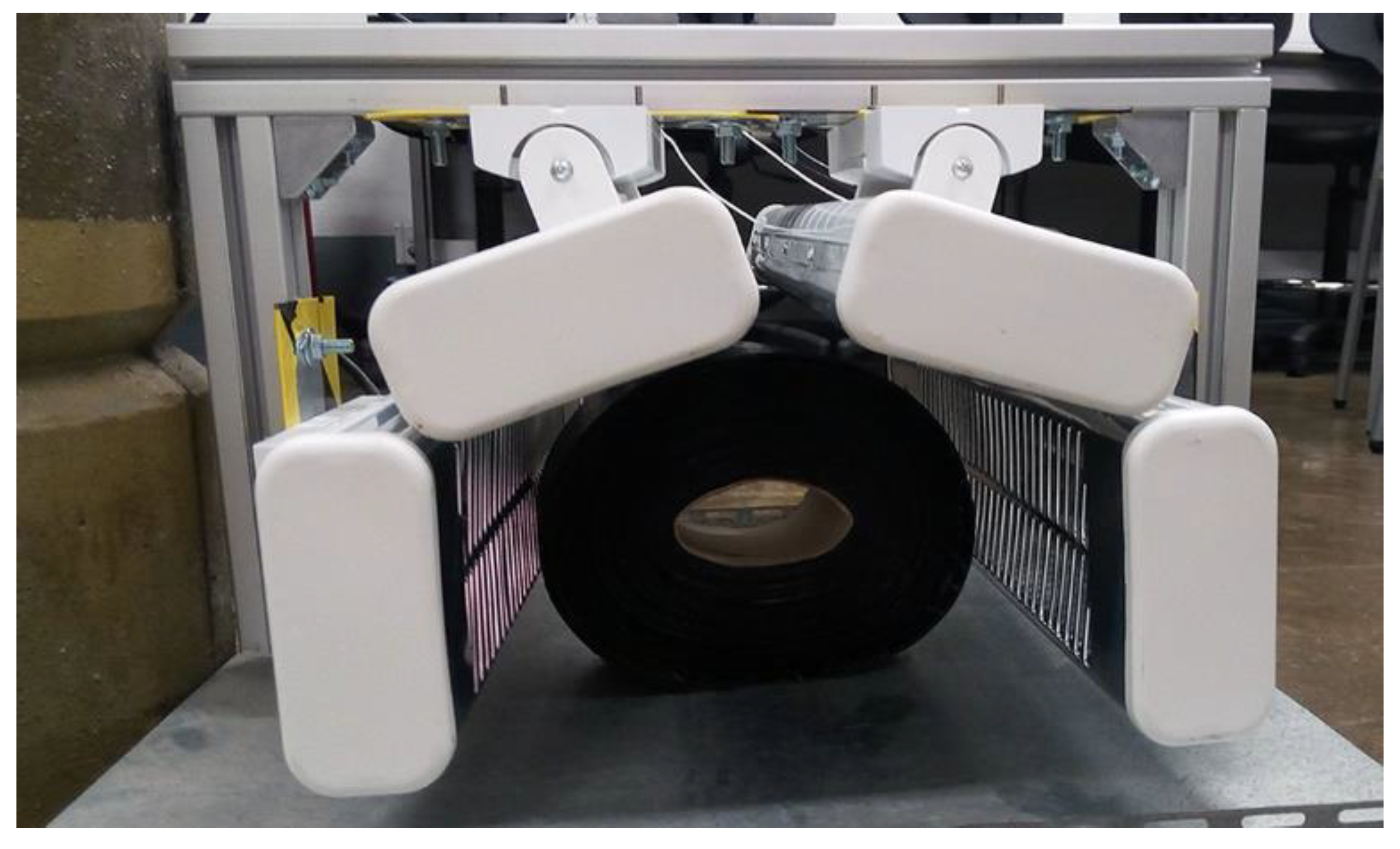 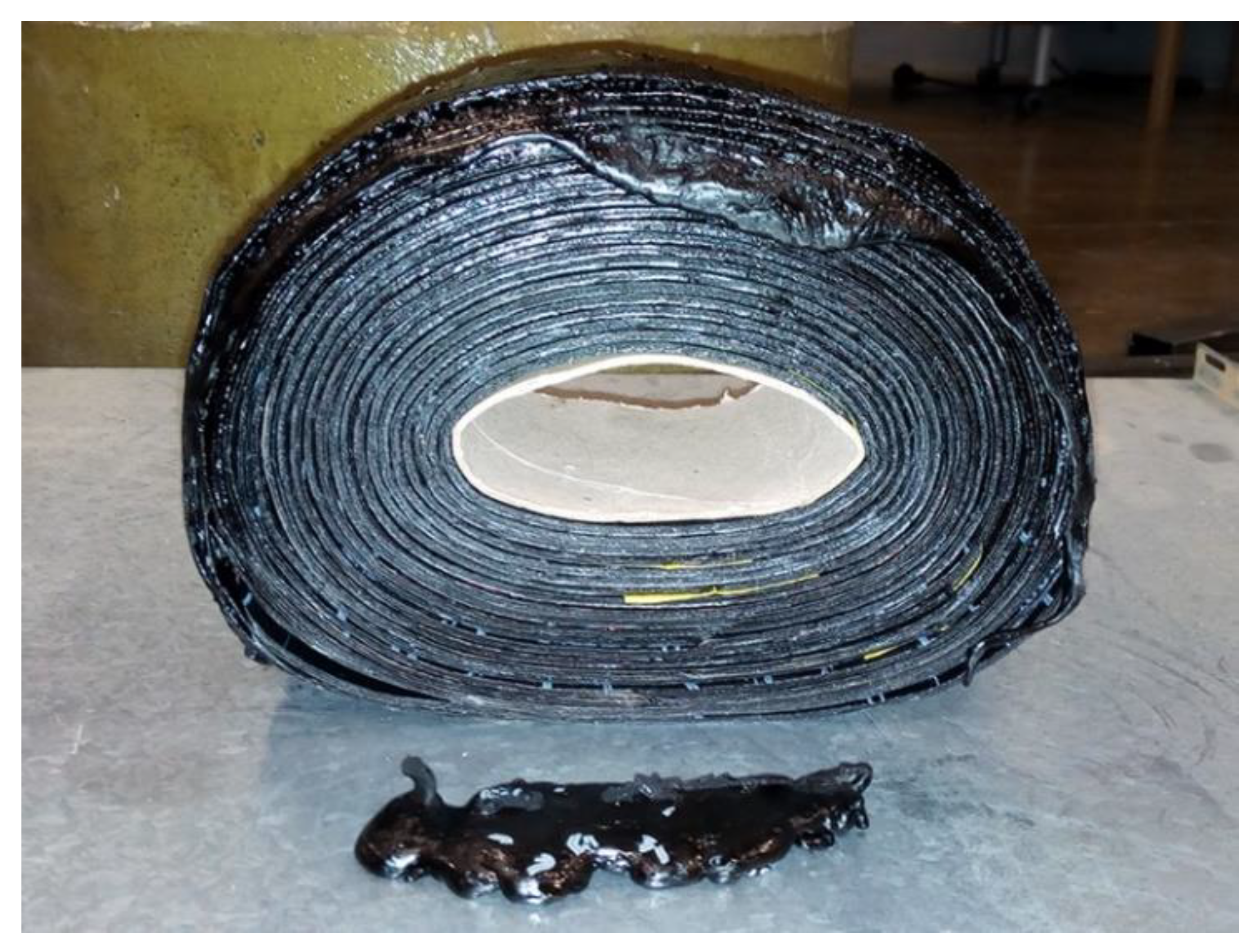 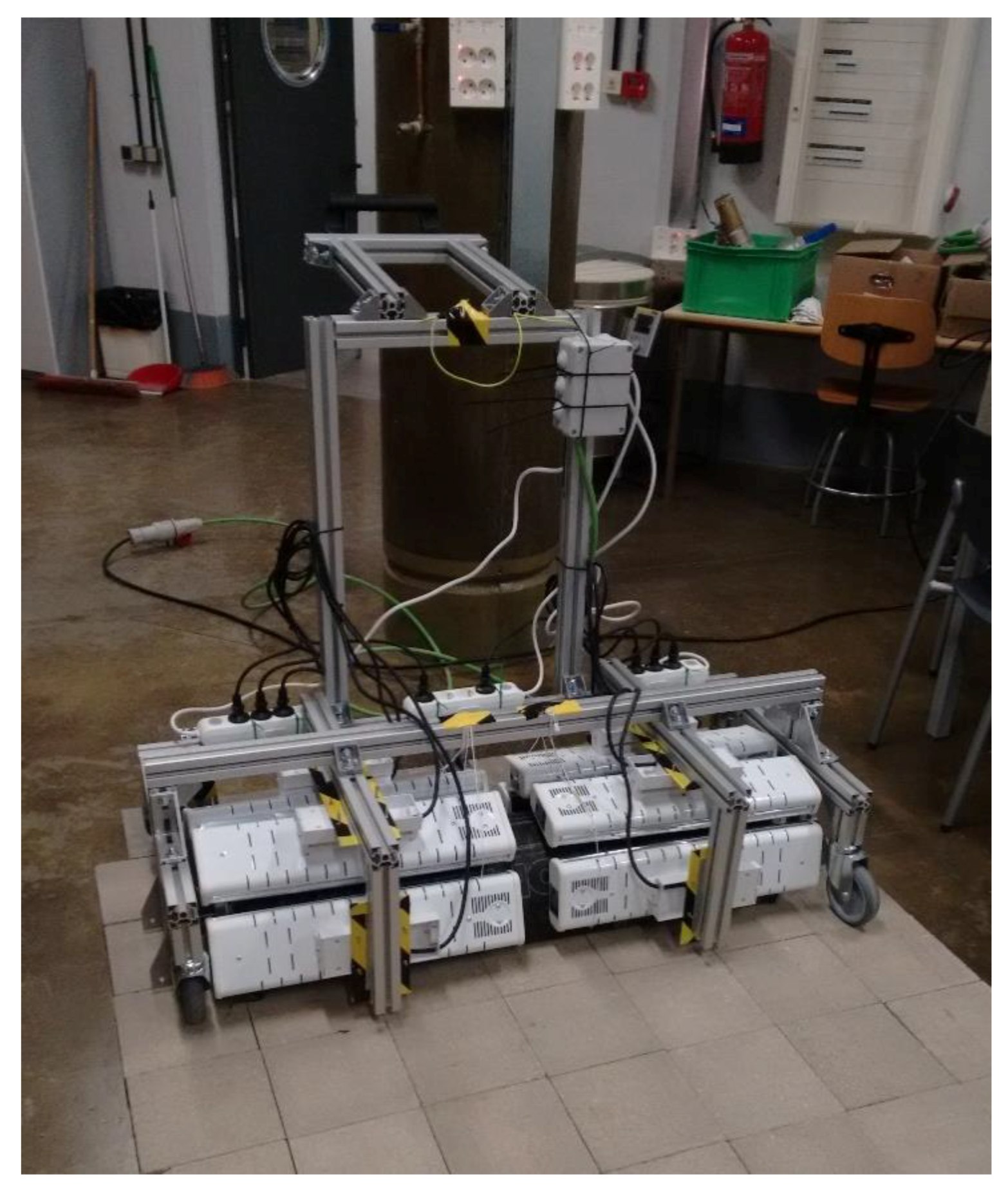 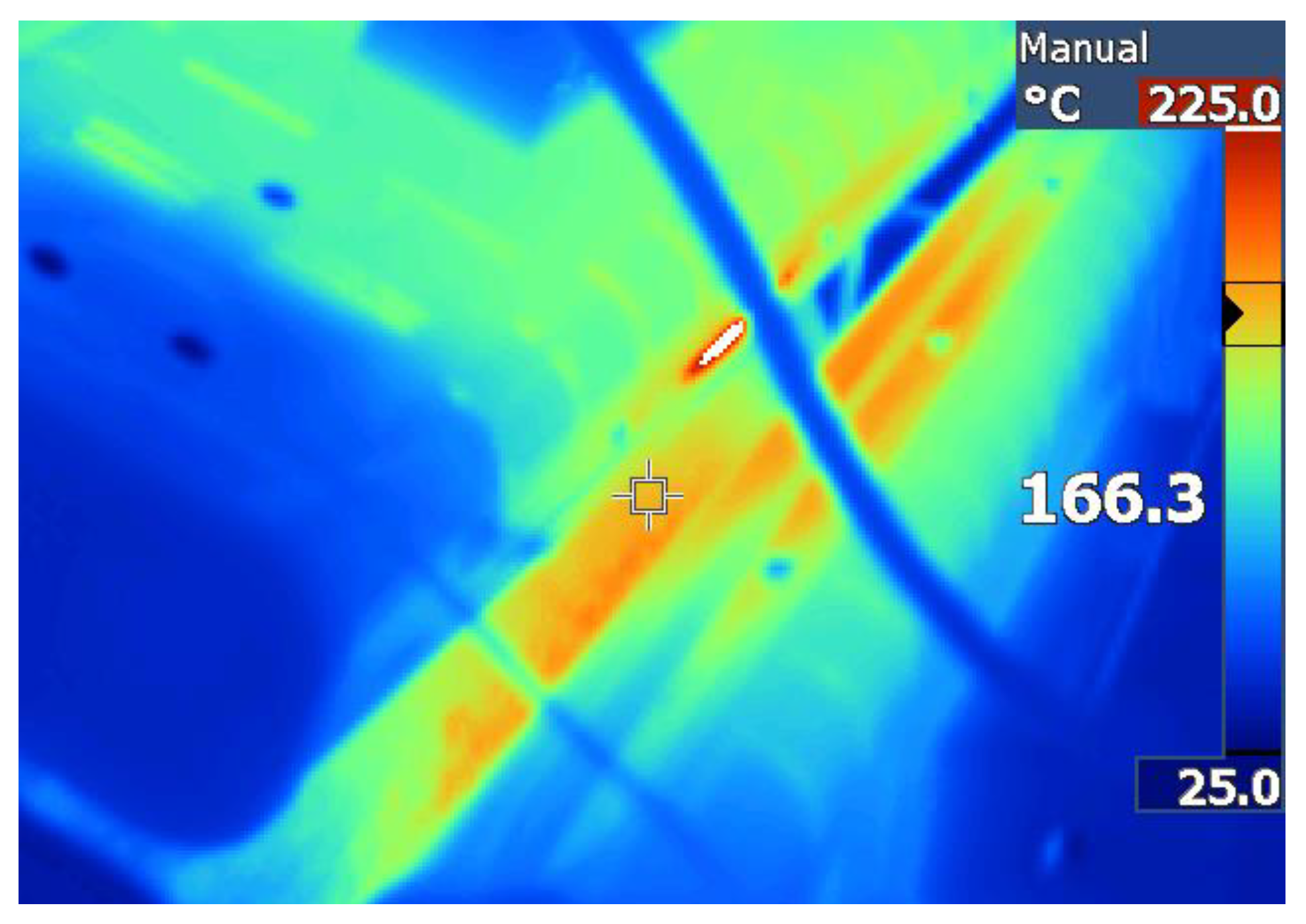 Table 1. Physical properties of roofing asphalt.
Table 1. Physical properties of roofing asphalt.
© 2019 by the authors. Licensee MDPI, Basel, Switzerland. This article is an open access article distributed under the terms and conditions of the Creative Commons Attribution (CC BY) license (http://creativecommons.org/licenses/by/4.0/).
We use cookies on our website to ensure you get the best experience. Read more about our cookies here.
Accept
We have just recently launched a new version of our website. Help us to further improve by taking part in this short 5 minute survey here. here.
Never show this again