Nanostructured Ni Based Anode and Cathode for Alkaline Water Electrolyzers

Solar-driven water splitting is considered one of the promising future routes to generate fuel in a sustainable way. A carbon-free solar fuel, molecular hydrogen, can here be produced along two different but intimately related routes, photoelectrochemical (PEC) water splitting or photovoltaic electrolysis (PV-electrolysis), where the latter builds on well-established solar cell and electrolysis materials with high efficiency. The PV-electrolysis approach is also possible to construct from an integrated PEC/PV-system avoiding dc–dc converters and enabling heat exchange between the PV and electrolyzer part, to a conventionally wired PV-electrolysis system. In either case, the operating voltage at a certain current needs to be matched with the catalyst system in the electrolysis part. Here, we investigate ((Ag),Cu)(In,Ga)Se2 ((A)CIGS)-materials with varying Ga-content modules for combination with NiMo–NiO catalysts in alkaline water splitting. The use of (A)CIGS is attractive because of the low cost-to-performance ratio and the possibility to optimize the performance of the system by tuning the band gap of (A)CIGS in contrast to Si technology. The band gap tuning is possible by changing the Ga/(Ga + In) ratio. Optoelectronic properties of the (A)CIGS materials with Ga/(Ga + In) ratios between 0.23 and 0.47 and the voltage and power output from the resulting water splitting modules are reported. Electrolysis is quantified at temperatures between 25 and 60 °C, an interval obtainable by varying the thermal heat exchange form a 1-sun illuminated PV module and an electrolyte system. The band gaps of the (A)CIGS thin films were between 1.08 to 1.25 eV and the three-cell module power conversion efficiencies (PCE) ranged from 16.44% with 1.08 eV band gap and 19.04% with 1.17 eV band gap. The highest solar-to-hydrogen (STH) efficiency was 13.33% for the (A)CIGS–NiMo–NiO system with 17.97% module efficiency and electrolysis at 60 °C compared to a STH efficiency of 12.98% at 25 °C. The increase in STH efficiency with increasing temperature was more notable for lower band gaps as these are closer to the overpotential threshold for performing efficient solar-driven catalysis, while only a modest improvement can be obtained by utilizing thermal exchange for a band gap matched PV-catalysts system. The results show that usage of cost-effective and stable thin film PV materials and earth abundant catalysts can provide STH efficiencies beyond 13% even with PV modules with modest efficiency. View Full-Text
Keywords: electrocatalytic solar water splitting; PV-electrolysis; band gap tuning; CIGS; thermal exchange; solar–to–hydrogen efficiency electrocatalytic solar water splitting; PV-electrolysis; band gap tuning; CIGS; thermal exchange; solar–to–hydrogen efficiency
►▼ Show Figures 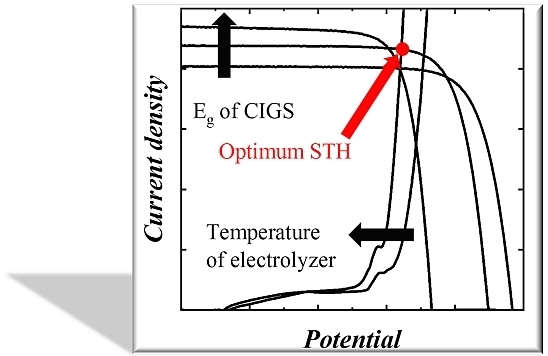