In this paper, the results of the sensitivity analysis applied to a fuel cell hybrid power system using a fuel economy strategy is analyzed in order to select the best values of the parameters involved in fuel consumption optimization. The fuel economy strategy uses the fuel and air flow rates to efficiently operate the proton-exchange membrane (PEM) fuel cell (FC) system based on the load-following control and the global extremum seeking (GES) algorithm. The load-following control will ensure the charge-sustained mode for the batteries’ stack, improving its lifetime. The optimization function’s optimum, which is defined to improve the fuel economy, will be tracked in real-time by two GES algorithms that will generate the references for the controller of the boost DC-DC converter and air regulator. The optimization function and performance indicators (such as FC net power, FC electrical efficiency, fuel efficiency, and fuel economy) have a multimodal behavior in dithers’ frequency. Furthermore, the optimum in the considered range of frequencies depends on the load level. So, the best value could be selected as the frequency where the optimum is obtained for the most load levels. Considering a dither frequency of 100 Hz selected as the best value, the sensitivity analysis of the fuel economy is further analyzed for different values of the weighting parameter keff, highlighting the multimodal feature in the parameters for the optimization function and fuel economy as well. A keff value around of 20 lpm/W seems to give the best fuel economy in the full range of load. View Full-Text
Keywords: proton exchange membrane fuel cell; hydrogen economy; fueling flows control; global extremum seeking; load following; optimization proton exchange membrane fuel cell; hydrogen economy; fueling flows control; global extremum seeking; load following; optimization
►▼ Show Figures 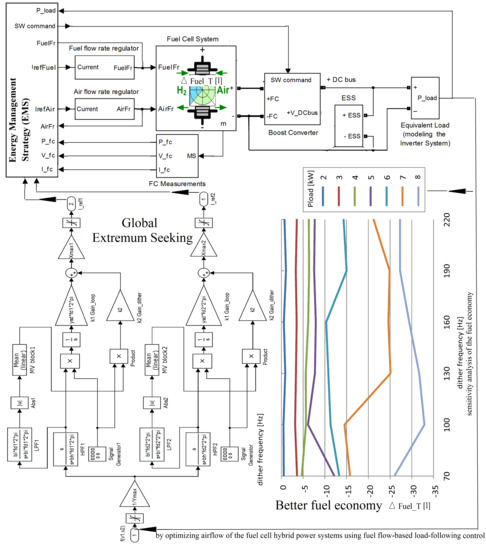