A Rebalancing Strategy for the Imbalance Problem in Bike-Sharing Systems

Nowadays, the Internet of Things (IoT) is considered to be a hot research topic. In this network, all smart devices can work and cooperate over the Internet environment. The links between the digital and real worlds help smart devices to react like humans (smart devices can hear, see, think, make decisions, and perform complicated tasks). The critical advantage of the IoT is that smart devices can automatically do their tasks without human involvement. Nowadays, the IoT is involved in all aspects of civilian life, including transportation, smart grids, security and public safety, agriculture, logistics, and e-health. Furthermore, energy harvesting (EH), in which radio frequency (RF) signals can transfer both information and energy at the same time, can be considered to be a promising solution for extending the lifetime of energy-constrained IoT devices [1,2,3,4,5,6,7,8,9,10]. EH communication systems commonly use the two traditional time switching (TS) and power splitting (PS) protocols, with the comparison of these protocols in different system networks. Moreover, we can see that the loss of information in the harvesting phase in the TS protocol and the low coverage area in the PS protocol are the main disadvantages of these protocols. In addition, the complicated hardware structure of the PS protocol compared with the simpler hardware in the TS protocol is also a main disadvantage of the PS protocol. [11,12,13,14,15,16]. In this research, we selected the half-duplex (HD) model because of its simplicity and the possibility of applying it in real-world scenarios. In reality, not all wireless nodes are equipped with full-duplex capacity due to limitations in hardware or implementation cost. From this point of view, we considered the TS protocol and the HD model for our model system.
In the next generation of communication systems, billions of wireless devices will be connected to each other via the IoT system, which will lead to an energy consumption problem. Therefore, energy efficiency (EE), measured in bits per watt, is considered to be an important emerging metric in energy-constrained wireless communication networks due to their energy shortage [17,18,19]. The authors of [20] investigated the EE optimization problems in the SWIPT sensor networks, which employs both the PS and the TS protocols. In [21], the authors investigated an EE resource allocation algorithm for SWIPT in an OFDMA system, where the receivers employed the PS scheme to harvest energy. The authors of [22] investigated OFDMA systems with the PS SWIPT, and proposed a resource allocation (ResAll) scheme to maximize EE. Without considering SWIPT, for the MIMO two-way AF relay channels, the latest EE beamforming scheme was derived in [23], which only considers a single-stream transmission per user and cannot be applied to multiple data stream scenarios because of the different objective expressions. In [24], the optimal global EE performance was investigated in interference-limited networks where the SWIPT scheme was not employed. The EE in SWIPT is based on the IoT distributed antenna system (DAS), as studied in [25]. In [26], a time-slotted large-scale MIMO system for energy harvesting and information transmission was studied, where an energy-efficient optimization scheme was proposed by jointly optimizing both transfer duration and transmitted power. The authors of [27] developed a distributed iteration algorithm for power allocation, PS ratio, and relay selection to maximize EE in clustered wireless sensor networks with SWIPT. The authors of [28] considered the EE maximization problem in a wireless powered communication network (WPCN), where multiple users harvest energy from a dedicated power station and then communicate with an information receiving station.
In this research, we propose and investigate power beacon-assisted (PB) EH in an HD communication network under co-channel interference over a Rayleigh fading environment. We considered the model system to be the TS protocol. Firstly, the exact and asymptotic form expressions of the outage probability (OP) were derived. Then we investigated the EE of the model system and the influence of the primary system parameters on the performance of the proposed system. Finally, the accuracy of the analytical expressions was derived and verified using a Monte Carlo simulation in connection with the primary system parameters. From the results, we determined that the analytical mathematical and simulated results are the same. The main contributions are summarized as follows:
The rest of this paper is organized as follows. Section 2 presents the system model. Section 3 investigates the system performance and the system EE. Section 4 gives the results, and some discussions are provided. Finally, some conclusions are drawn in Section 5.

In this work, we consider a PB EH in an HD communication network. From Figure 1, we denote that S and D are the source node and the destination node, respectively, PB denotes a power beacon-assisted node, and I denotes the co-channel interference from the environment. Let f1 and f2 represent the I-S and I-D interference channels, respectively. Let h and g denote the PB-S and S-D channels. Assume that all channels are Rayleigh block fading channels. As drawn in Figure 2, the whole transmission block (T) can be divided into parts. Let T and 0 < α < 1 denote the whole symbol duration and the TS factor, respectively. S and I scavenge energy from the radio frequency signal received from the PB node S and node I, respectively, during αT. Moreover, the remaining (1 − α)T is spent on signal transmission from node S to node D, and the signal from node I to node D. Note that all the energy harvested at node S and node I is consumed for forwarding source information to node D.

In the second phase, node S transmits the signal to node D, and the received signal, yD, at the destination is formulated as: where we have , and is the AWGN with zero-mean and variance N0.
From Equation (4), the end to end signal to interference plus noise ratio (SINR) was calculated as the following:
Substituting Equation (3) into Equation (5) and assuming that the power of interferer noise is very large, so , we have: where .

Based on the system model in the above section, we derived the OP throughput performance and EE of the proposed system.
From Equation (6) we obtain the OP of the model system as the following: where is the threshold of the system, R is the source rate, , and .
In order to calculate the probability in Equation (7), we have to determine the probability density function (PDF) and the cumulative density function (CDF) of X and Y, respectively, as in Lemma 1 and Lemma 2.
Lemma 1.
The CDF of Y can be computed as:where are the mean of the random variables (RVs) , respectively.
Lemma 2.
The CDF of X can be expressed as:where are the mean of the RVs , respectively.
In this situation, we investigated two cases as follows:
Case 1:We assume that .
From Equation (9), we obtain:
Therefore, the PDF can be obtained as:
Case 2:We assume that .
Similarly, we can obtain the CDF and the PDF of X as follows:

In this paper, we investigated the PB EH in an HD communication network under co-channel interference over a Rayleigh fading environment. We considered the model system in the TS protocol. Firstly, the exact and asymptotic form expressions of the OP were derived. Then we investigated the EE of the model system and the influence of the primary system parameters on the performance of the proposed system. Finally, the accuracy of the analytical expressions was derived and verified using a Monte Carlo simulation in connection with the primary system parameters. From the results, we can conclude that the analytical mathematical and simulated results are the same, thus verifying the correctness of the analytical expressions.

This research was supported by the National Key Laboratory of Digital Control and System Engineering (DCSELAB), HCMUT, VNU-HCM and was funded by the Czech Ministry of Education, Youth and Sports within the grants No. SP2018/59 and SP2019/41 conducted at the VSB – Technical University of Ostrava. 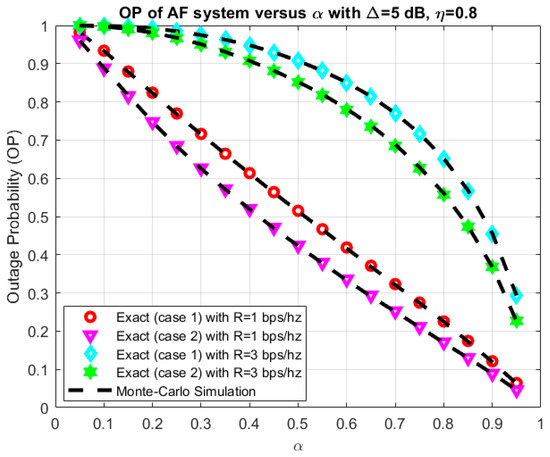 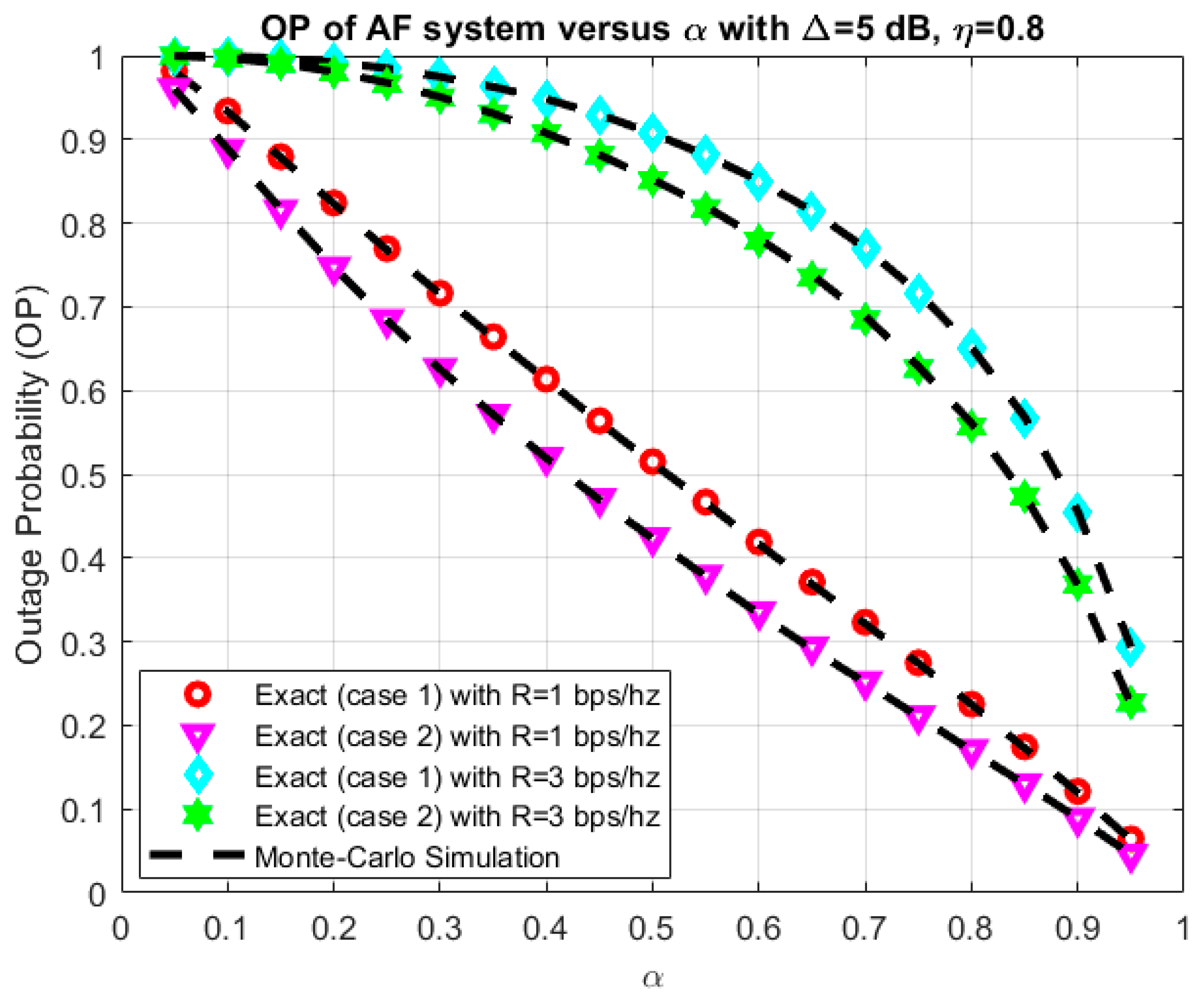 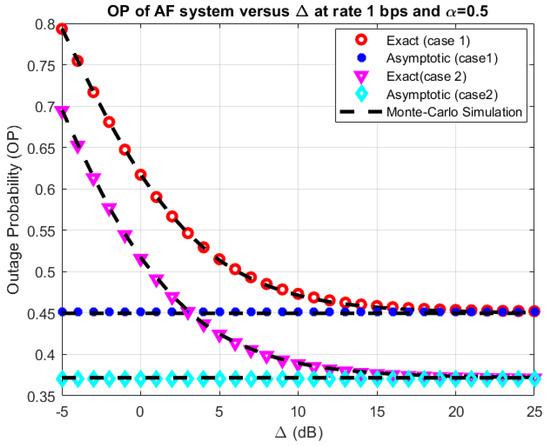 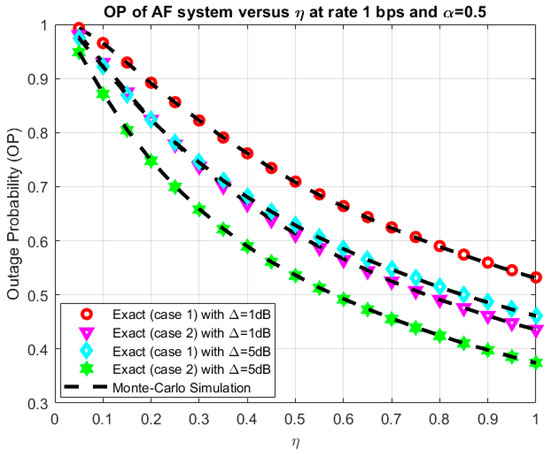 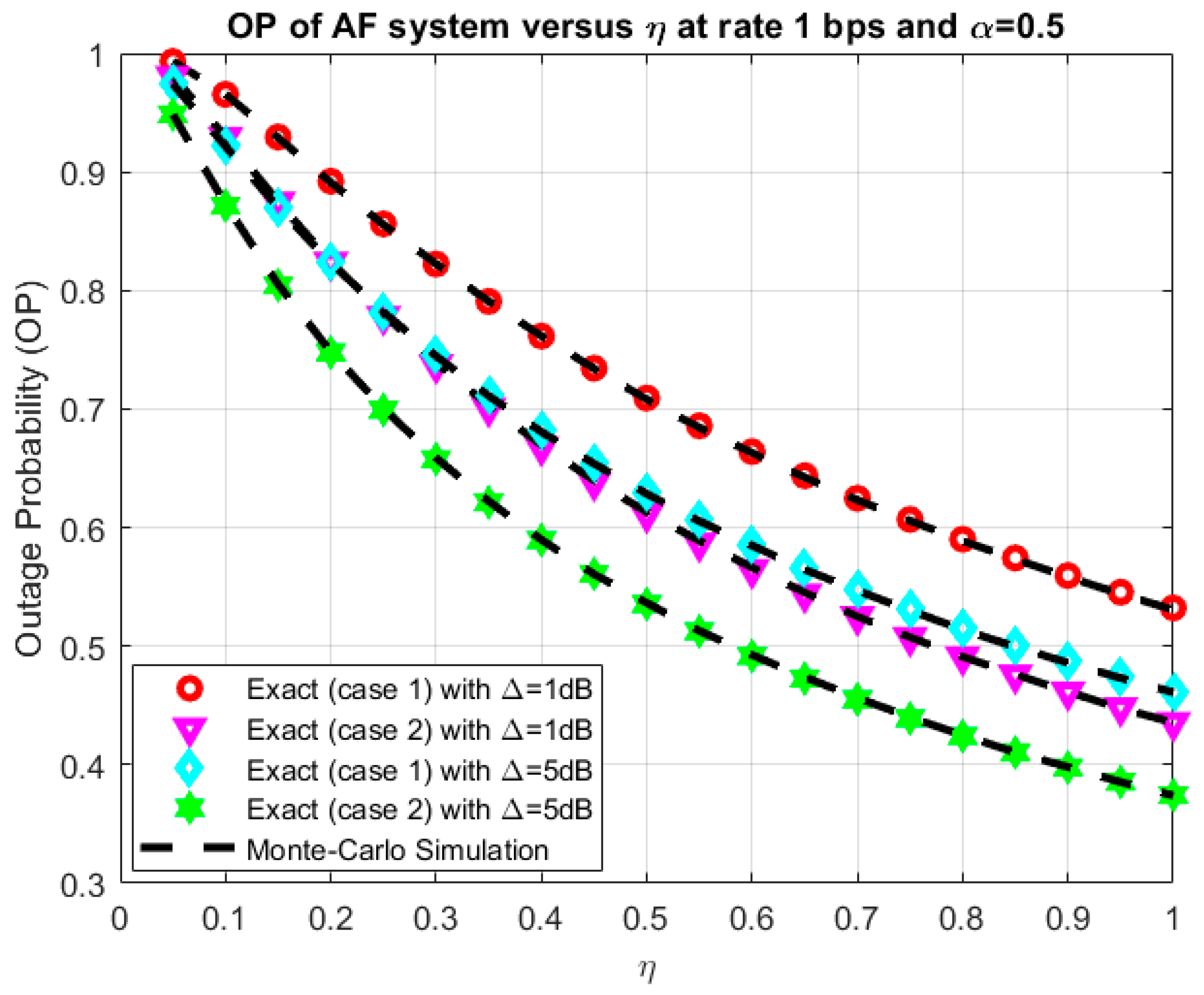 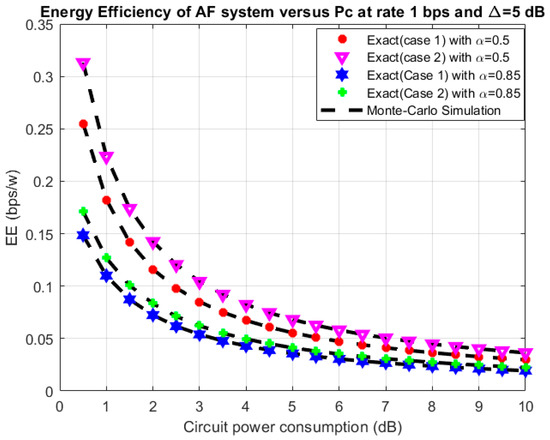 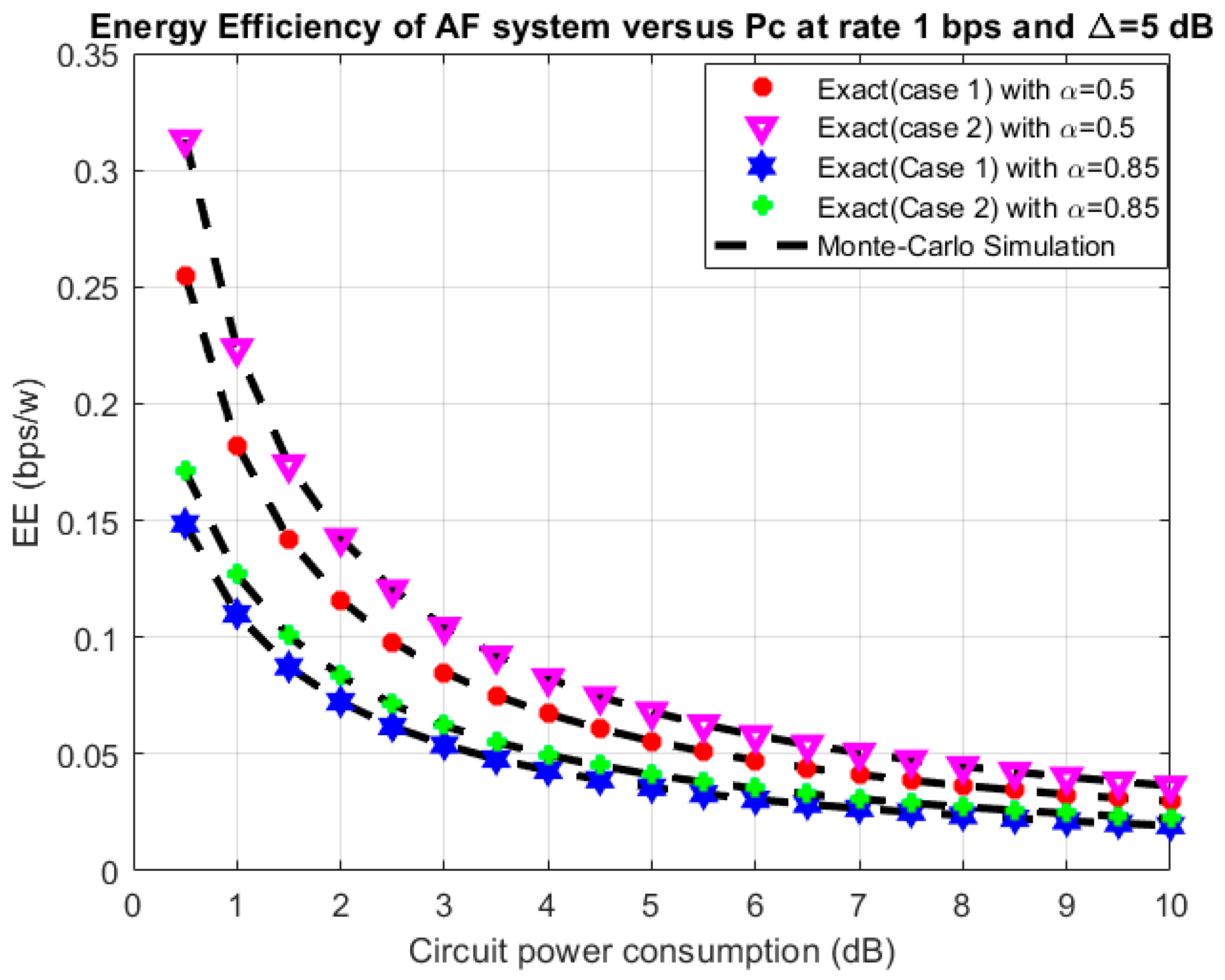 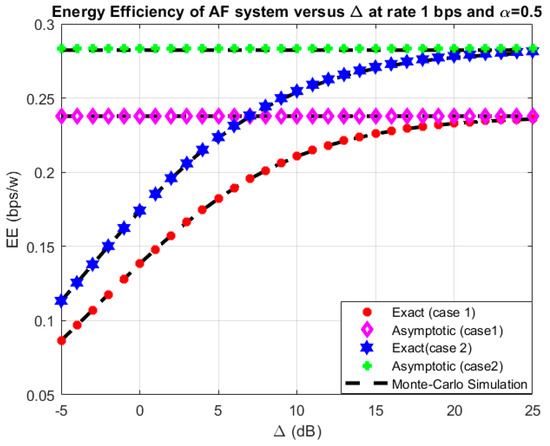