The thermal energy storage properties of a working fluid can be modified by the exothermic and endothermic adsorption and desorption of fluid molecules in the micro/nanoporous materials. In this study, thermogravimetric (TG) analysis experiments and molecular simulations (molecular dynamics, MD, and grand canonical Monte Carlo, GCMC) were employed to examine the thermal energy storage properties of the UIO-66 metal organic framework material, UIO-66/H2O nanofluids and pure water. Our results showed that the molecular simulation calculations were, in principle, consistent with the obtained experimental data. The thermal energy storage performance of UIO-66/H2O nanofluids was enhanced with the increase in the UIO-66 mass fraction. In addition, the differences between the simulation calculations and experimental results could be mainly ascribed to the different structures of UIO-66 and the evaporation of fluid samples. Furthermore, this work indicated that molecular simulations contributed to developing novel working pairs of metal organic heat carriers (MOHCs).
Keywords: nanofluid; adsorption; energy storage; H2O; UIO-66 nanofluid; adsorption; energy storage; H2O; UIO-66

The energy crisis is one of today’s most concerning issues and can be ascribed to the devastating consumption of fossil fuels over the past few centuries. Typically, thermodynamic cycles have become the main approach used to conserve energy since the industrial revolution [1], while the working fluid is the energy carrier in the thermodynamic cycles. Therefore, the efficiency of thermodynamic cycles can be enhanced by employing a working fluid with good thermophysical properties [2,3,4]. Notably, mixing the working fluid with other materials is a promising way to modify the thermophysical properties of the basic working fluid. It has been extensively reported that nanofluids and working fluid mixed with nanoparticles possess superior thermal conductivity to that of pure fluid [5,6,7,8,9,10,11]. In particular, nanofluids have been applied in energy storage systems to enhance the thermal conductivity of the energy storage materials [12,13,14,15].
Nanofluids containing micro/nanoporous materials can be applied in energy storage since additional energy is required to desorb the working fluid molecules from the pores during evaporation. As a result, the nanofluid will release excess heat due to the exothermic adsorption of working fluid molecules into the micro/nanoporous materials during condensation [16]. Thus, more power is generated from the thermodynamic cycle with this type of nanofluid. Xu et al. [17,18,19] investigated the conversion among thermal energy, mechanical energy and electrical energy in the water/carbon nanotube nanofluid, and their results suggested that the energy density in the nanofluids system was higher than that in pure water. Furthermore, McGrail et al. [20] tested the thermal energy storage properties of refrigerants/metal organic frameworks (MOFs) in which nanofluids served as the metal organic heat carriers (MOHCs) and revealed that R123 MOHC had produced 15% more power than that of the basic fluid. Therefore, nanofluids containing micro/nanoporous materials have great application potential in the field of energy.
MOFs [21] are a subclass of coordination polymers which consist of metal ions (or clusters) coordinated to the organic ligands. In addition, MOFs possess nanoscale porous structures, along with a high specific surface area for adsorption, separation and catalysis [22,23,24]. Henninger et al. [25] had examined the feasibility of several MOFs as the adsorbents for low-temperature heating and cooling applications. Rezk et al. [26] investigated the adsorption characteristics of water in HKUST-1 and MIL-100 MOFs. Their results suggested that HKUST-1 performed much better than silica gel, which could considerably improve the application of MOFs in adsorption refrigeration, heat pump and thermal storage. Elsayed et al. [27] analyzed the adsorption property of water in Ni-MOF-74 and proved its feasibility for thermal energy storage. Moreover, Zheng et al. [28] reported the adsorption isotherms of water and R134a in the moisture-stable Ni-MOF-74, and their results suggested that the adsorption patterns differed remarkably for the hydrophobic/hydrophilic pores.
Molecular simulation (MS) [29] was employed to unveil the mechanism of the fluid–solid interaction in MOF structures, which can be attributed to its superiority regarding nanoscale investigations [30]. For instance, Sun et al. [31] simulated the diffusion and adsorption properties of n-hexane and cyclohexane in Ni\DOBDC MOF using molecular dynamics (MD) and showed that the attractive interaction between n-hexane and Ni\DOBDC was stronger than that of cyclohexane. In addition, Annapureddy et al. [32] investigated the adsorption mechanism of various gases, R12, R143a and methane in MOFs by means of MD and grand canonical Monte Carlo (GCMC) techniques.
Working fluid and MOFs have diverse and abundant structures and components; therefore, the properties of MOHCs should be further investigated. Typically, among the various MOF structures, UIO-66 [33] demonstrates exceptional stability and good adsorption properties. Meanwhile, water molecules display considerable adsorption enthalpies in MOFs [34]. Consequently, the energy storage properties of UIO-66 and water mixed with nanofluids were analyzed using the experiments and MS calculations detailed in this study.

Theoretically, the calculations of energy storage properties of MOHCs (∆hMOHCs) during the endothermic process should be performed on Formula [20]: where ∆hFluid is the enthalpy change of pure working fluid, ()MOFs represents the thermodynamic energy change in MOF nanoparticles when the temperature changes from T0 to T1, ∆hdesorption stands for the desorption heat of fluid in MOF nanoparticles, while x indicates the mass fraction of MOF nanoparticles in MOHCs.
Research on the thermophysical properties of pure species, especially water, is mature, so the ∆hFluid of water from T0 to T1 can be obtained through experimental and theoretical methods. In this study, the ∆hFluid of water was obtained from the National Institute of Standards and Technology (NIST [38]), while the properties of MOFs should be further explored for their various structures and components. As aforementioned, MS had been proven to be a powerful tool to investigate the properties of novel nanomaterials. Thus, the thermodynamic energy change in UIO-66 was calculated by MD simulations, and the desorption heat of H2O in UIO-66 was measured through GCMC simulations using the Materials Studio software [39] on a Dell Precision Workstation T7910 in our laboratory. In addition, the cut-off distance of simulations was set at 12.5 Å (10−10 m), and periodic boundary conditions were applied in the X, Y and Z axes. The atom–atom interactions in the systems were described by means of the COMPASS force field [40] as follows.
Clearly, this function consists of the valence terms and the nonbonding interaction terms, among which, the bond (b), angle (), torsion angle (), out of plane angle (), and the combinations of two or three internal coordinates, are the valence terms. Meanwhile, the LJ 9-6 function and Coulombic function are the van der Waals terms, whereas the electrostatic interaction is the nonbonding interaction term. In this work, the charges in UIO-66 and water were assigned based on the COMPASS force field, and the structures and systems were kept electronically neutral. Besides, the Ewald summation method was also employed to correct the long-range Coulomb interactions.

Notably, the structure of UIO-66, a 3D-framework comprising of one main octahedral cage and eight tetrahedral subordinate cages, in which the octahedral Zr is connected to twelve organic ligands (p-phthalic acid) [33]. As shown in Figure 1, the 4 × 4 × 4 unit cells of UIO-6 (including 192 Zr atoms, 1536 C atoms, 896 H atoms and 1024 O atoms) were built in the simulation model. The original crystal structure was obtained from the Cambridge Crystallographic Data Centre (CCDC). Afterwards, the model was simulated by MD at 300, 320, 340, 360, 380, 400, and 420 K in the canonical (NVT) ensemble, with a timestep of 0.01 fs (10−15 s). Moreover, the temperature was controlled using the Berendsen thermostat, and the computation of thermodynamic energy for the model lasted for 200 ps (10−12 s) after a 500 ps simulation was carried out for equilibration.

The adsorption isotherms of H2O in the UIO-66 nanoparticles, the model in Figure 1, were simulated by means of GCMC from 300 to 360 K at an interval of 5 K. The pressure was set from 1 to 200 kPa with 10 data points. At the same time, the fugacity was calculated using the Peng–Robinson equation, and the equilibration time was 50,000 cycles for each point of the adsorption isotherm, while the statistical time was 100,000 cycles. Therefore, the desorption heat could be computed based on the adsorption isotherms. More details of the simulations are described elsewhere [41].

In this study, the thermal energy storage capacities of UIO-66 powders, UIO-66/H2O nanofluids and pure water are investigated using TG-DSC experiments and MS calculations, respectively. The thermodynamic energy changes of the UIO-66 powders measured in the experiments provided a good match with the reported data. Both MD and the experiments indicate that the thermodynamic energy change in UIO-66 increased with the increase in temperature. The differences between the simulations and experimental results can be ascribed to the different structures of tested samples in the simulations and experiments. Furthermore, the results of both methods suggest that the thermal energy storage capacity of UIO-66/H2O nanofluids is enhanced with the increase in the mass fraction of UIO-66. MOHCs have various and abundant working pairs; consequently, this work has provided an efficient and low-cost simulation approach to investigate the energy storage properties of novel MOHCs.

The authors would like to acknowledge the colleagues from the Key Laboratory of Low-grade Energy Utilization Technologies & Systems, Ministry of Education for their perspectives and suggestions related to data collection and statistical analysis. 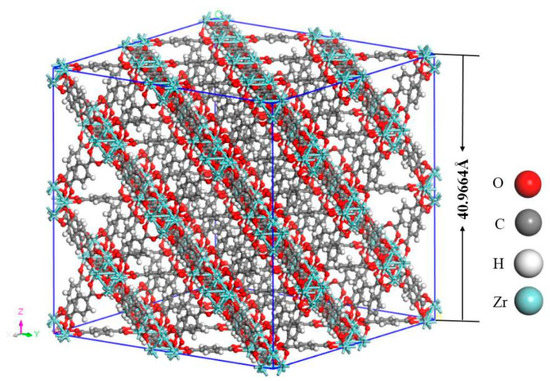 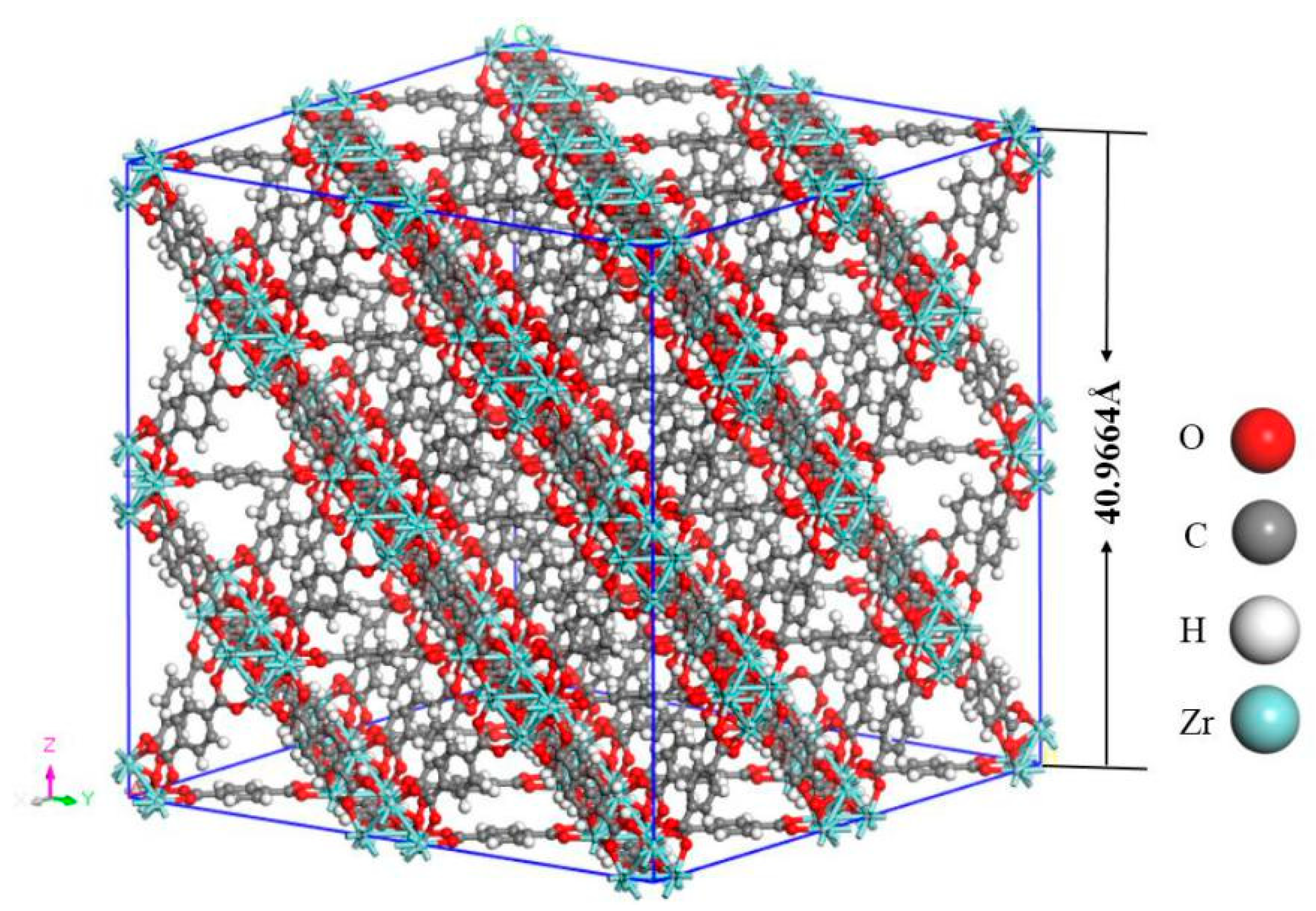 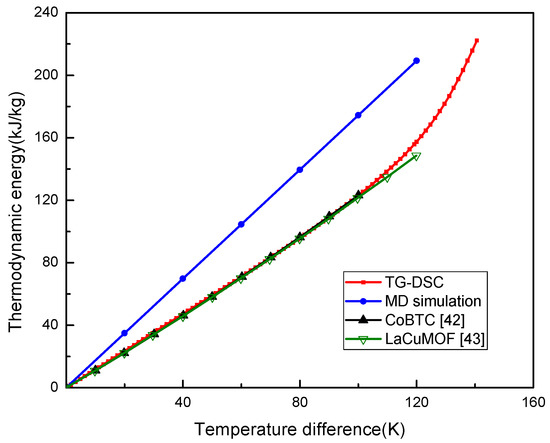 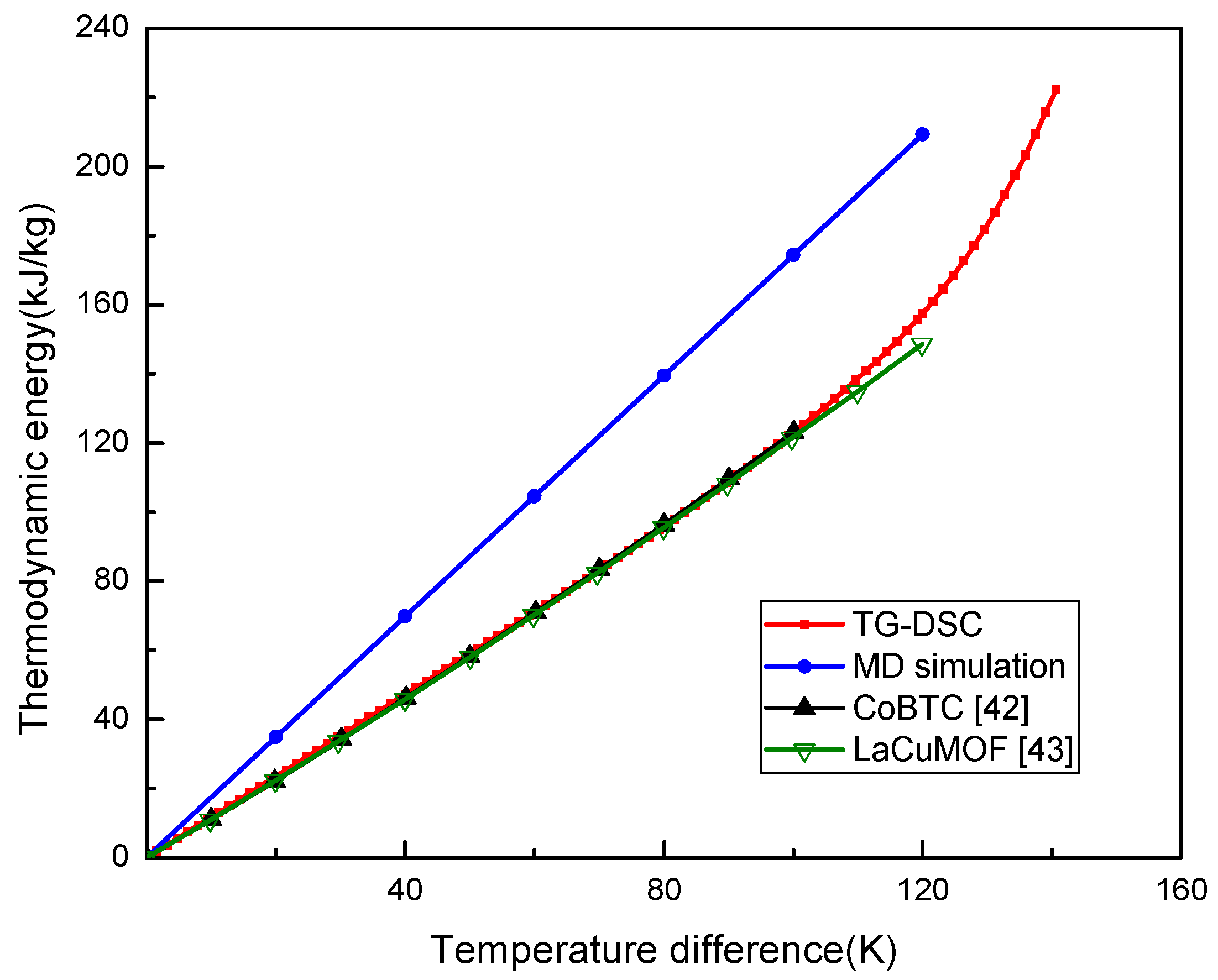 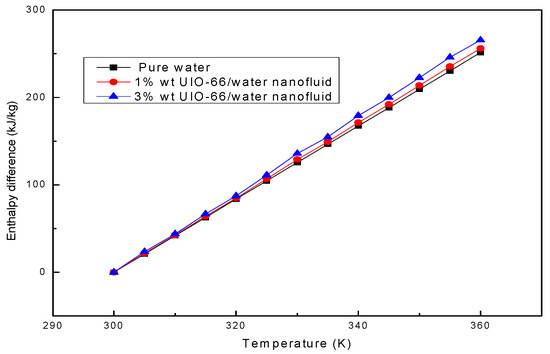 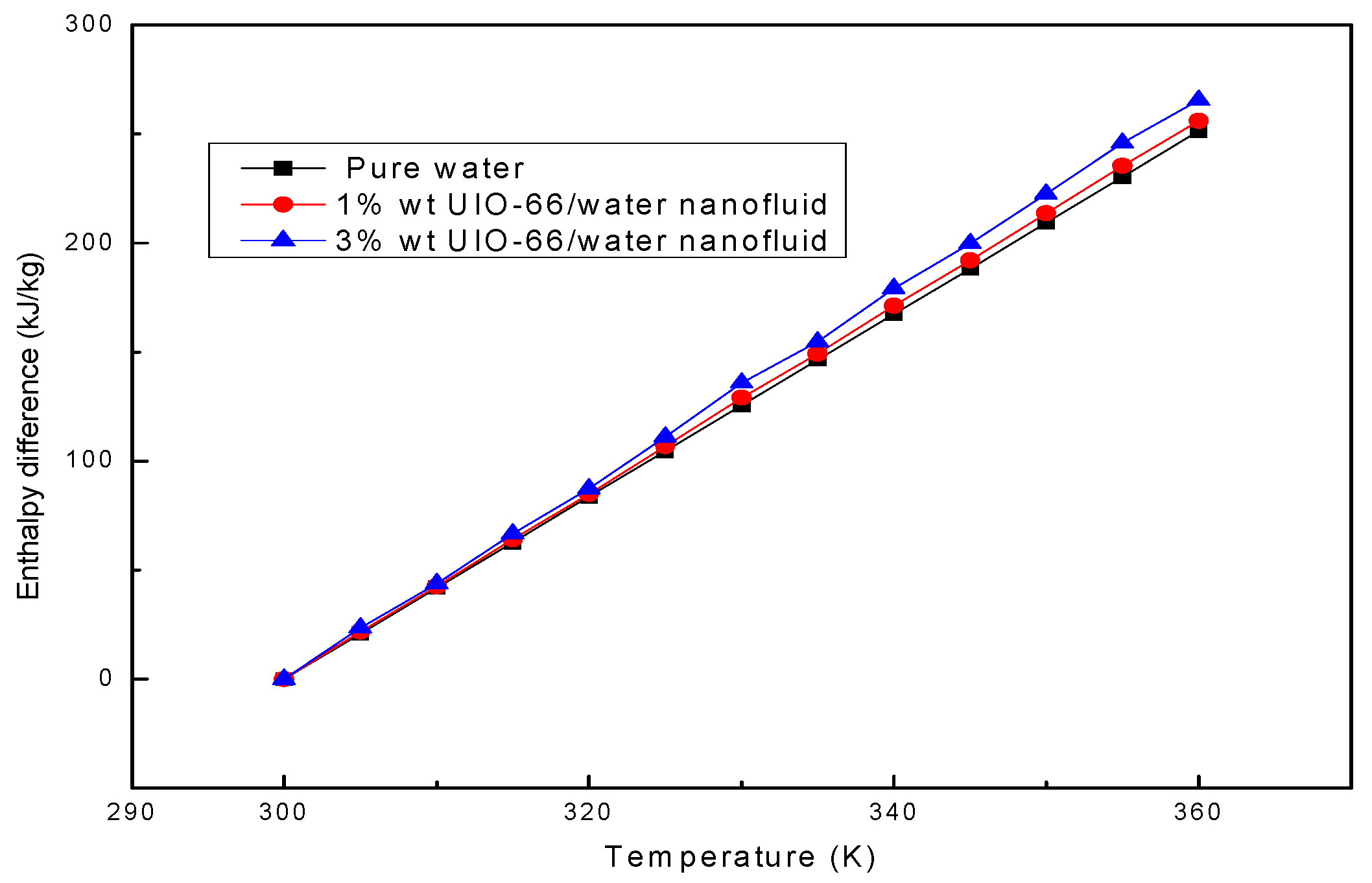 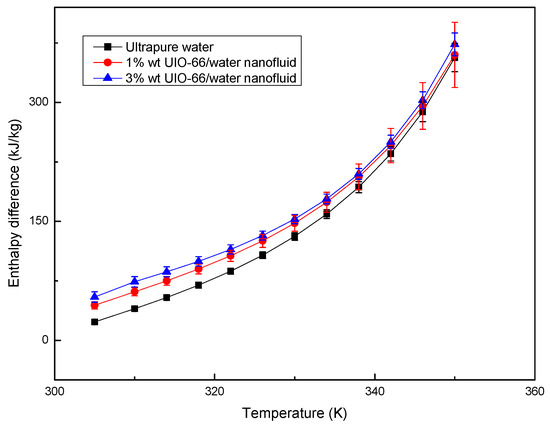 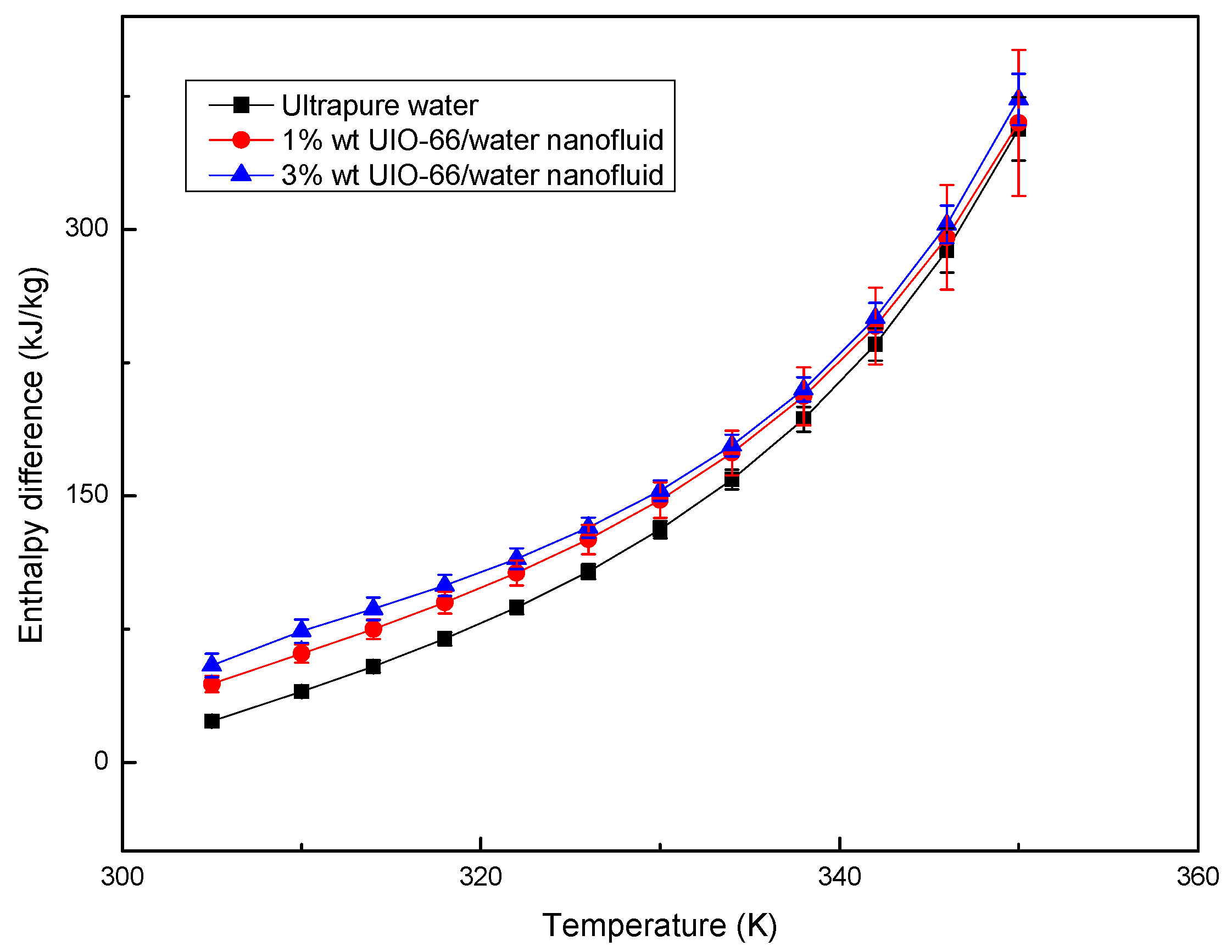 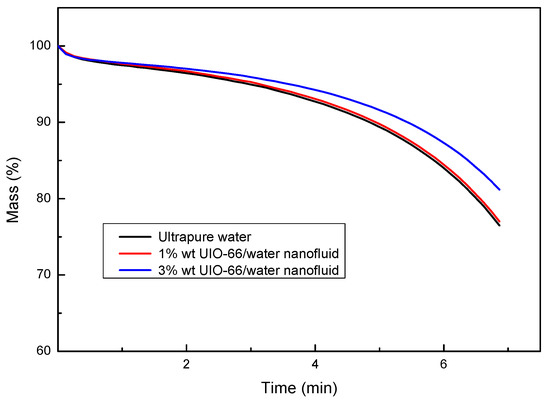 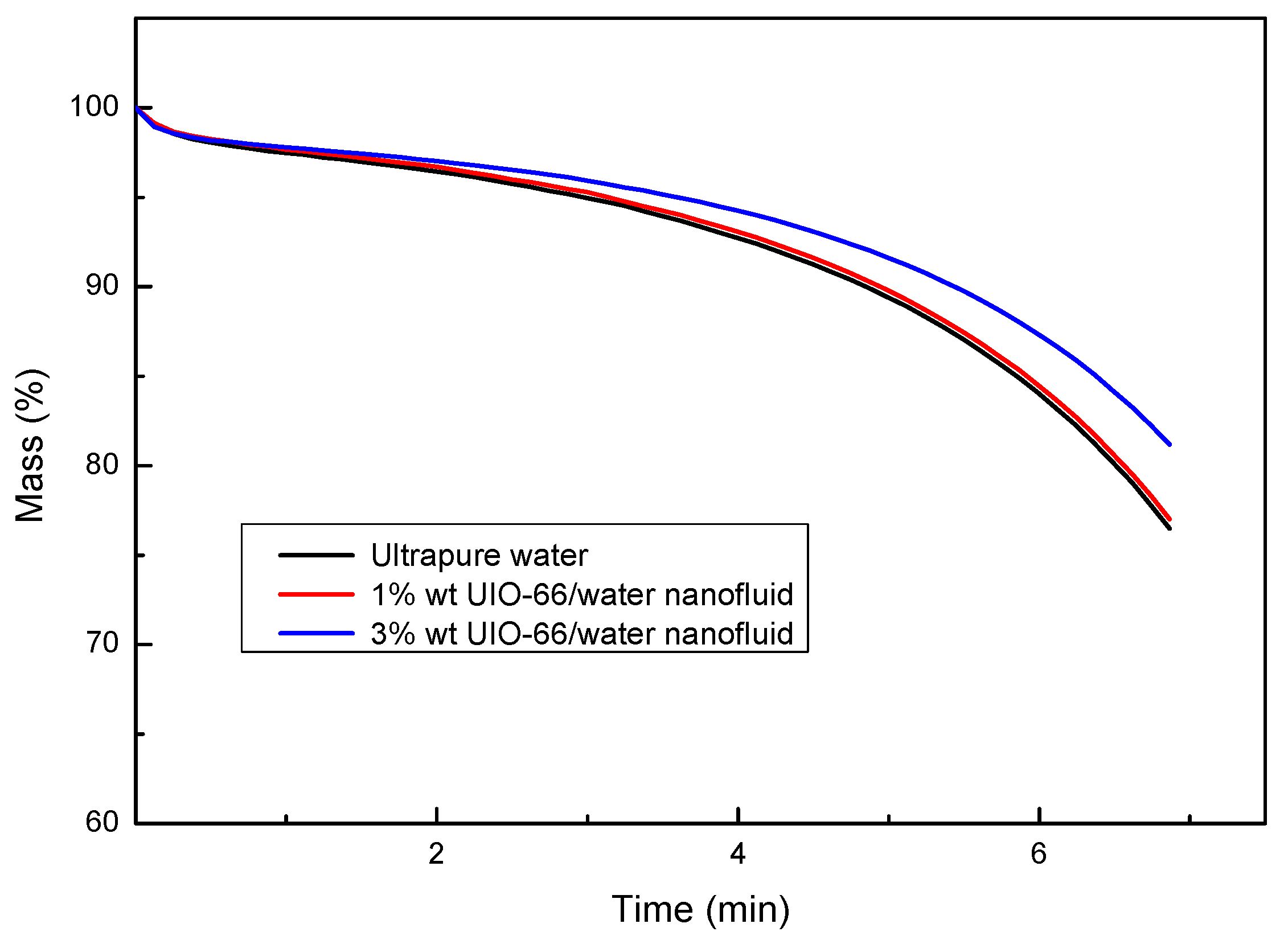