Background: Common buckwheat (Fagopyrum esculentum Moench) is an annual spring-emerging crop that is classified among the dicotyledons, due to the manner of its cultivation, use, and chemical composition of seeds. The use of buckwheat straw for energy purposes—for example, for the production of second generation bioethanol—might enable its wider application and increase the cost-effectiveness of tillage. Methods: In this study, we examined the usability of buckwheat straw for the production of bioethanol. We pretreated the raw material with ionic liquids and subsequently performed enzymatic hydrolysis and alcoholic fermentation. The obtained chemometric data were analyzed using the Partial Least Squares (PLS) regression model. PLS regression in combination with spectral analysis within the near-infrared (NIR) spectrum allowed for the rapid determination of the amount of cellulose in the raw material and also provided information on the changes taking place in its structure. Results: We obtained good results for the combination of 1-ethyl-3-methylimidazolium acetate as the ionic liquid and Cellic CTec2 as the enzymatic preparation for the pretreatment of buckwheat straw. The highest concentration of glucose following 72 h of enzymatic hydrolysis was found to be around 5.5 g/dm3. The highest concentration of ethanol (3.31 g/dm3) was obtained with the combination of 1-butyl-3-methylimidazolium acetate for the pretreatment and cellulase from Trichoderma reesei for enzymatic hydrolysis. Conclusions: In summary, the efficiency of the fermentation process is strictly associated with the pool of available fermenting sugars, and it depends on the type of ionic liquid used during the pretreatment and on the enzymatic preparation. It is possible to obtain bioethanol from buckwheat straw using ionic liquid for pretreatment of the raw material prior to the enzymatic hydrolysis and alcoholic fermentation of the material. View Full-Text
Keywords: bioethanol; biomass; buckwheat straw; ionic liquid; pretreatment bioethanol; biomass; buckwheat straw; ionic liquid; pretreatment
►▼ Show Figures 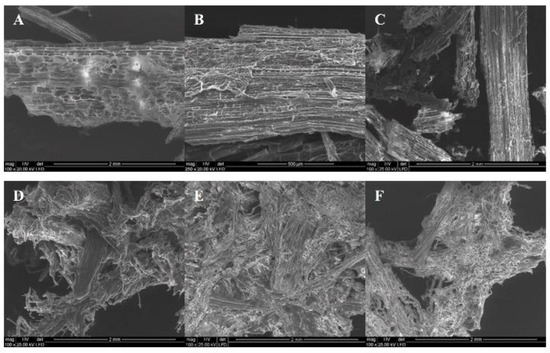