One of the vital elements in power system planning is management of transformer asset. Condition Based Monitoring (CBM) has been introduced by utilities as part of an asset management scheme to monitor the characteristics of operational parameters and provide a comprehensive diagnosis on transformers. Condition trends that indicate abnormality can be detected early and can be used to determine health conditions of transformers [1].
Multiple condition data are normally considered to diagnose the condition of transformers, such as oil quality, dissolved gases, furanic compounds, power factors, winding resistances, winding ratios, temperature, partial discharges, physical conditions and load tap changer conditions [2,3]. This information is embedded in a single quantitative value known as Health Index (HI), which can give overall condition status of transformers [4,5,6,7,8]. The HI can be utilized to evaluate transformer deteriorations that require diagnosis, maintenance and approaching end of life [9,10].
The HI of transformers has been identified for its potential in predicting the future states of transformer population. Presently, there are fewer studies on modelling the deterioration of transformers using the HI [11,12]. A few techniques based on extrapolation, regression, trend forecasting and curve fitting analysis have been implemented to achieve this purpose [13,14]. However, due to the scattering nature of HI, a reliable prediction is quite difficult to be achieved based on these techniques [7,14,15].
One of the possible approaches that can be used to evaluate the future condition of transformers is the Markov Model (MM). It is a stochastic approach, where the transition probabilities can be identified based on existing condition data. The MM has been widely applied to forecast the conditions of bridges, bridge elements, pavements, storm water piping components and steel hydraulic structures in civil engineering [16,17,18,19,20]. The MM has also been used to predict the deterioration states of switchgear populations, spare units and fault occurrence of transformers [21,22,23,24]. Based on the MM, the maintenance cost can be estimated to assist asset managers in planning their future budgetary [25,26,27]. The financial aspect of the CBM needs to be planned appropriately whereby it can be achieved by maintenance cost analysis.
In this paper, the MM is applied to predict the deterioration states of the transformer population based on the HI. In total, 120 distribution transformers of oil type (33/11 kV and 30 MVA) are used for the case study. The first part is the modelling of deterioration states of the transformer population based on the MM and the HI. The second part is the sensitivity analysis on the transformer deterioration model based on a pre-determined maintenance policy model. The final part is the assessment of cost impact based on the pre-determined maintenance policy model.

The HI is defined as a method to measure the overall health of an asset by quantifying the condition monitoring information [28]. It is based on scoring, rating and ranking techniques, which considers theoretical knowledge, standards, guidelines and expert judgments. Most of the electrical power utilities adopt HI for management of transformers, such as Kinectrics Incorporate, DNV KEMA, Hydro Quebec, EDF Energy, TERNA, Electricity Generating Authority of Thailand and Tenaga Nasional Berhad [6,7,8,29]. Figure 1 shows an example of a basic framework of HI formulation, which is dependent upon the weighting factors in order to determine the final HI [28].
Equation (1) shows the common HI formulation introduced in [9,10], which was adopted in this study: where Kj is the assigned rating given for each factor, HIFj is the assigned score for each factor and j is the number of condition data. According to [9,10], the constant values of A and B are 60% and 40%, respectively, which correspond to parameters of transformers and tap changers. In this study, the constants, A and B, were not considered since only transformer condition data are available for analysis. Furthermore, due to the limitation of data in the database, only oil quality, dissolved gases and furanic compounds were considered and the updated formulation of HI can be seen in Equation (2):
Based on the HI score, several indicator scales can be determined, which can be seen in Table 1 [9,10,30].

The MM is known as a probabilistic approach based on the Markov chain decision process that can be used to predict the future condition of equipment. It can be evaluated through state transition in a specific interval [15]. Since the MM does not rely heavily on historical conditions of equipment which are normally limited, the uncertainty effect due to constraints of a long-term data record could be minimized. Thus, the decision process is considered as a memoryless process [31]. Figure 2 illustrates the representation of the Markov chain for this study, which considers 5 states as stated in Table 1.
Generally, the Markov chain is determined by transition probabilities given as Pij [32,33]. Transition matrix, P, represents the transition probabilities. The corresponding transition matrix, P, for 5 states of MM used in this study is shown in Equation (3) as following:
In order to analyze the MM based on the HI of transformers, several assumptions were made. First, a monotonic process was assumed where the states of transformers either remained at its current state or moved to the next state. The assumption was made based on the fact that ageing of transformers was irreversible, of which data screening was carried out to filter transformers that have been refurbished either through rewinding or oil regeneration. In order to further simplify the Markov chain process, the transition probabilities were assumed to be stationary and maintain over time. Thus, the same value of probability Pij (t) was considered in a particular year. In addition, each state probabilities should be equal to one, for example, P55 + P54 = 1, P44 + P43 = 1, P33 + P32 = 1 and P22 + P21 = 1. The final state was set as 1, assuming that all transformers would end up in the poorest condition and remained at the last state. This concept of the MM is known as an absorbing model. Once the transition matrix has been developed, the future states of the HI of transformers can be determined based on the current state shown in Equation (4): where Hn+1 is the next state in a particular interval and Hn is the current state. The future state of the HI can also be determined by the MM based on the following equation: where t is the number of intervals,H0 is the initial state and Ht is the future deterioration state in t.

The research study was carried out successfully with contributions from all authors. The main research idea, simulation works and manuscript preparation were contributed by M.S.Y. N.A. contributed on the manuscript preparation and research idea. A.M.S., M.Z.A.A.K., J.J., E.J.K. and M.H.H. assisted in finalizing the research work and manuscript. Y.Z.Y.G. gave several suggestions from the industrial perspectives. All authors revised and approved the publication of the paper.

The authors would like to express their sincere gratitude to the Ministry of Education Malaysia, UPM, CELP UPM andUTeM for the technical and financial support of this research. 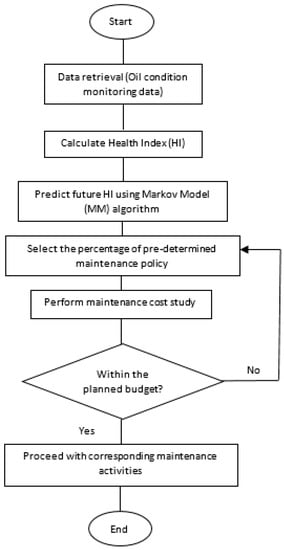 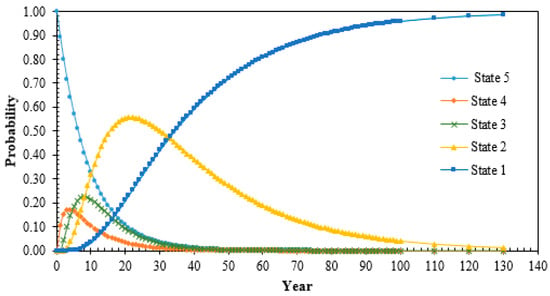 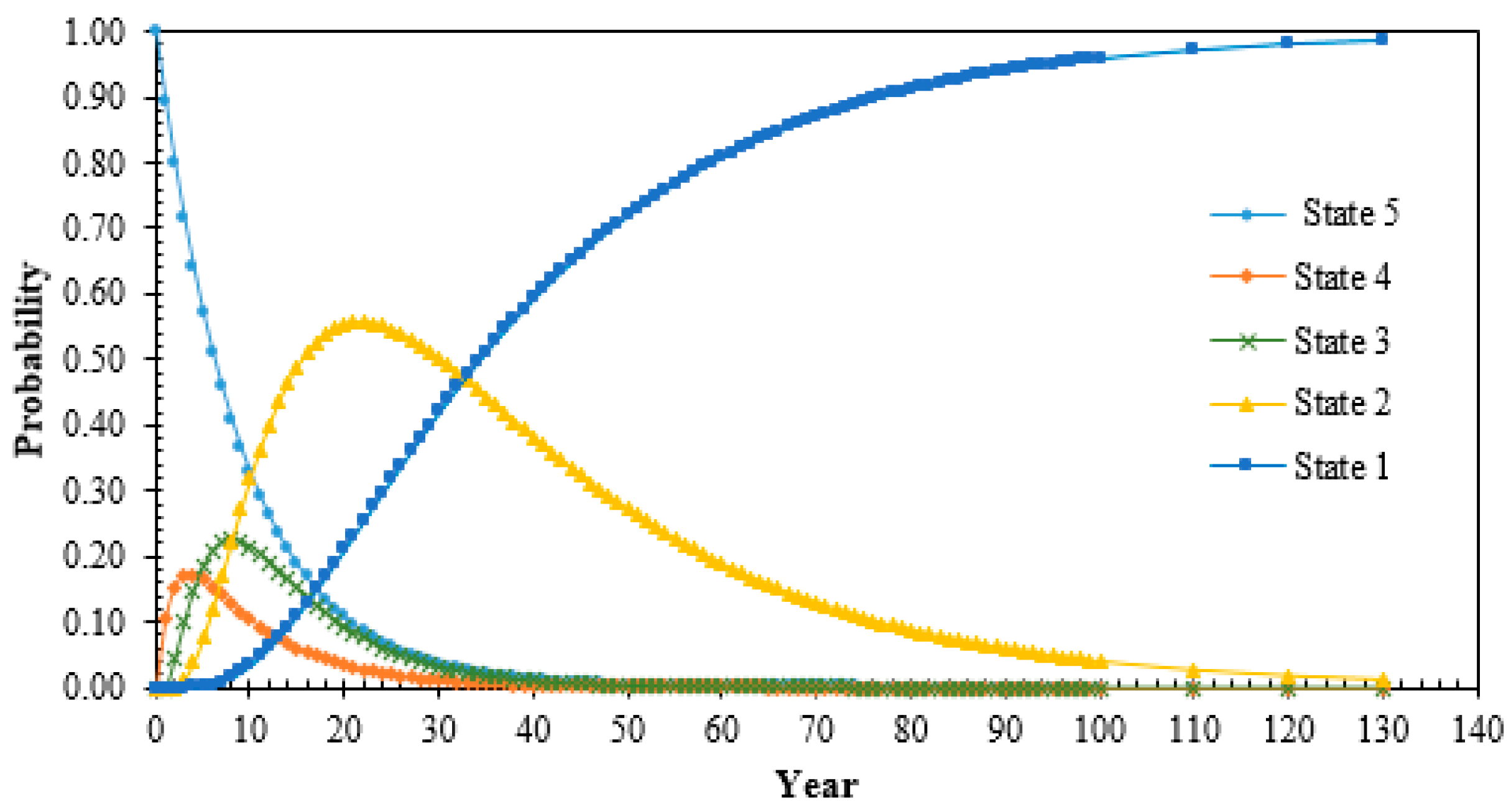 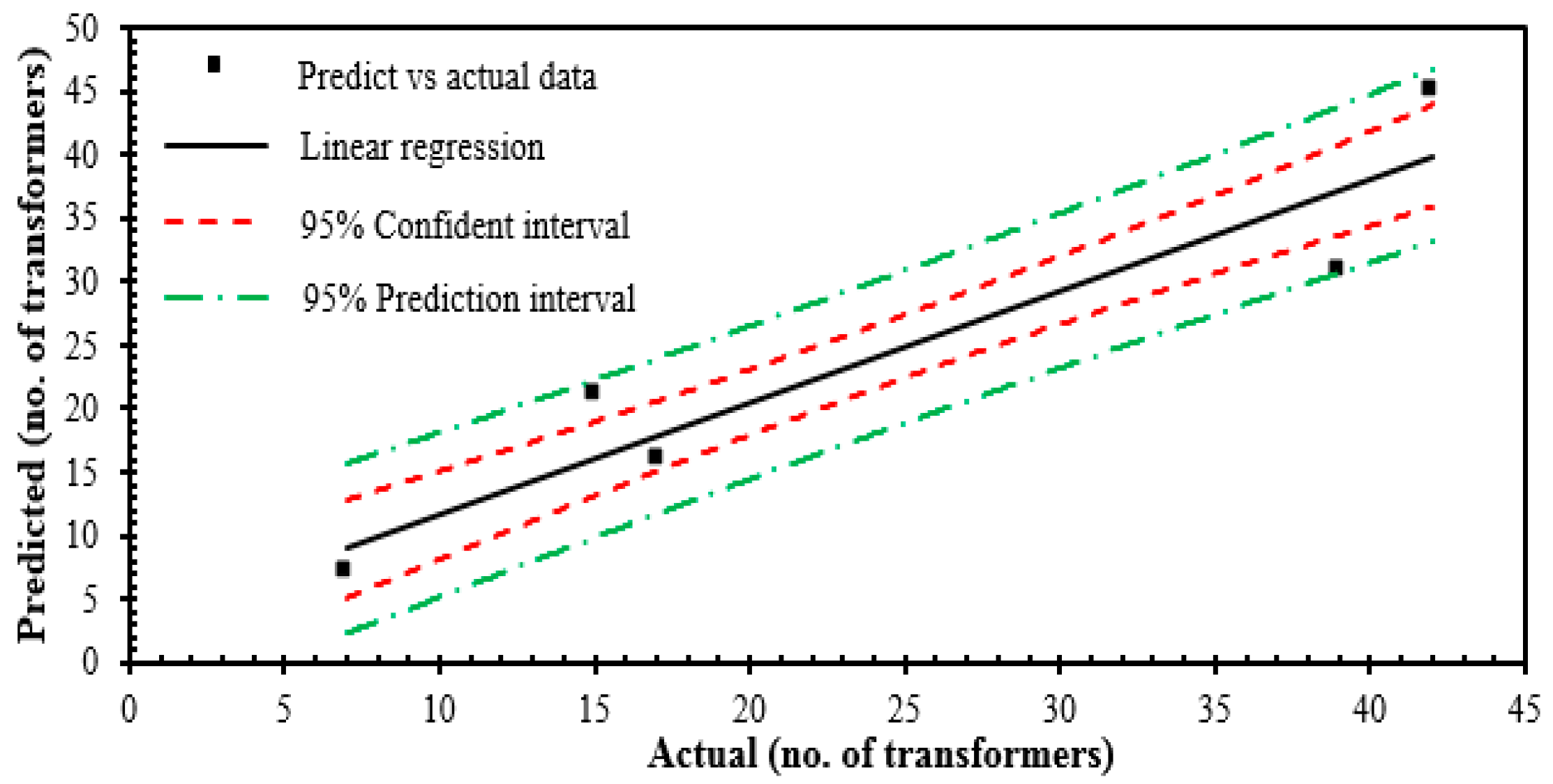 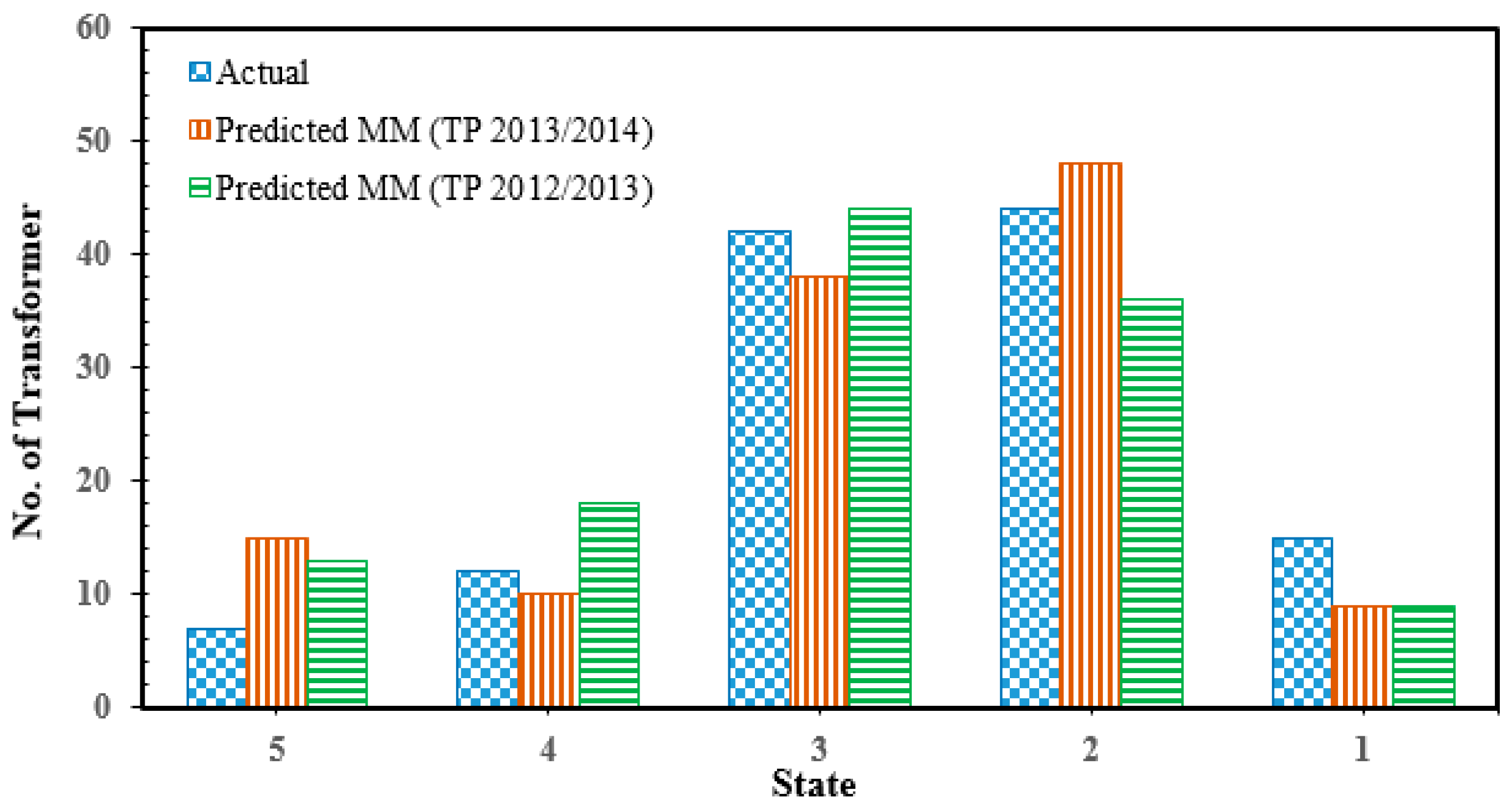