In many German energy projections, the assumption of power plant lifetimes plays a central role, since it is often used in projections for the existing fleet of power plants or as a criterion for decommissioning in model-based investigations. The result of these analyses is a power plant capacity retirement graph, which is then used to determine the replacement demand. Especially in the context of the German Energy transition (“Energiewende”) the amount and dynamics of replacement play an important role. Against this background, a large number of studies have been evaluated and fleet developments compared. Many studies refer to empirical values for the assumption of lifetimes without specifying them in greater detail. This approach was used to conduct an ex post lifetime analysis—accurate to each number of units—of German power plants that have been decommissioned since 1990. The analysis is conducted with the aid of a power plant database, which has been continuously updated for each individual unit since 1985. In addition to the power plants currently in operation, the database includes also includes power plant units that have been successively decommissioned over the past decades. The ex post analysis presents the first lifetime analysis for decommissioned German plants, which can serve as a basis for future power plant fleet projections. The analyses show that the lifetime of fossil-fired power plants has extended considerably. For example, whereas the real lifetimes of coal-fired power plants were in a range of 30 to 35 years in the 1990s, today they amount to 40 to 45 years on average. View Full-Text
Keywords: energy scenarios; power plant capacity; power plant fleet; operational lifetime energy scenarios; power plant capacity; power plant fleet; operational lifetime
►▼ Show Figures 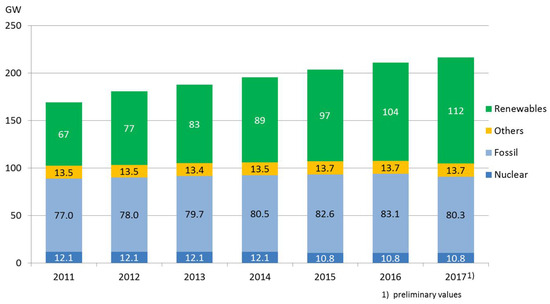