Impacts of Decarbonisation on the Water-Energy-Land (WEL) Nexus: A Case Study of the Spanish Electricity Sector

Over the last decades, combating climate change has been an important concern for policy makers. As a result, many policies have been designed towards this direction. Being electricity generation the focus of climate change mitigation policies, important changes are expected in this sector over the next few years as a result of the implementation of such policies. However, electricity production also generates other impacts on the water, energy and land (WEL) nexus that must be further investigated. To shed some light to this issue, this paper presents and discusses the potential impacts on the water-energy-land nexus resulting from the decarbonisation of the Spanish electricity system impacts under two different long-term scenarios. Using a Life Cycle Assessment (LCA) approach, a set of environmental impacts relevant for the nexus have been analysed for the current and future electricity generation technologies in Spain. Additionally, through the use of an optimization energy model—Times-Spain—the evolution of the electricity technologies in Spain until 2030, under two different scenarios and targets has been assessed. Taking into consideration such scenarios, the global warming, acidification, eutrophication, ecotoxicity, water consumption, resource depletion and land use impacts have been estimated. Results show that, over time, together with the decrease of greenhouse gas emission, acidification and eutrophication tend to decrease in both scenarios. On the contrary, ecotoxicity and resource use impacts tend to increase. View Full-Text
Keywords: energy systems; decarbonisation; water-energy-land nexus; LCA; scenarios energy systems; decarbonisation; water-energy-land nexus; LCA; scenarios
►▼ Show Figures 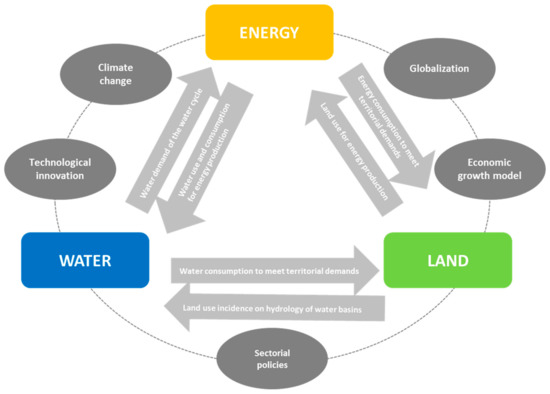