The low oxidation kinetics of alcohols and the need for expensive platinum group metals are still some of the main drawbacks for the commercialization of energy efficient direct alcohol fuel cells. In this work, we investigate the influence of nitrogen doping of ordered mesoporous carbon (CMK) as support on the electrochemical activity of PtRu nanoparticles. Nitrogen doping procedures involve the utilization of pyrrole as both nitrogen and carbon precursor by means of a templating method using mesoporous silica. This method allows obtaining carbon supports with up to 14 wt. % nitrogen, with an effective introduction of pyridinic, pyrrolic and quaternary nitrogen. PtRu nanoparticles were deposited by sodium formate reduction method. The presence of nitrogen mainly influences the Pt:Ru atomic ratio at the near surface, passing from 50:50 on the bare (un-doped) CMK to 70:30 for the N-doped CMK catalyst. The electroactivity towards the methanol oxidation reaction (MOR) was evaluated in acid and alkaline electrolytes. The presence of nitrogen in the support favors a faster oxidation of methanol due to the enrichment of Pt at the near surface together with an increase of the intrinsic activity of PtRu nanoparticles. View Full-Text
Keywords: N-doped; ordered mesoporous carbons; PtRu catalysts; methanol oxidation reaction; fuel cells N-doped; ordered mesoporous carbons; PtRu catalysts; methanol oxidation reaction; fuel cells
►▼ Show Figures 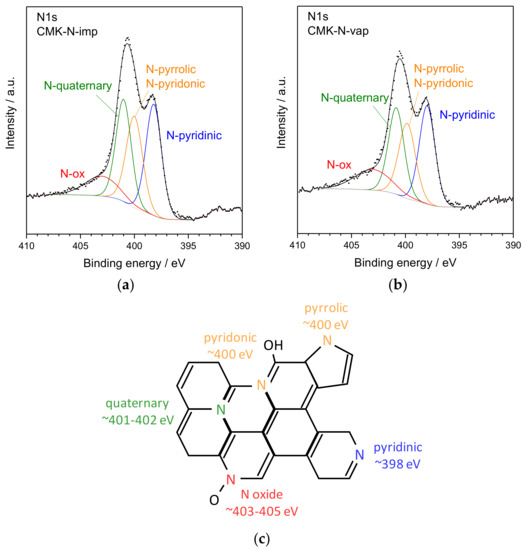