Low-Cost Syngas Shifting for Remote Gasifiers: Combination of CO2 Adsorption and Catalyst Addition in a Novel and Simplified Packed Structure

This paper presents the technical validation of a novel, low-complexity alternative based on the inclusion of a patented (IEPI-MU-2016-185) packed bed for improving the performance of remote, small-scale gasification facilities. This study was carried out in an updraft, atmospheric-pressure gasifier, outfitted with a syngas reflux line, air and oxygen feed, and an upper packed-bed coupled to the gasification unit to improve the syngas quality by catalytic treatment and CO2 adsorption. The experimental facility is located in the rural community San Pedro del Laurel, Ecuador. Gasification experiments, with and without packed material in the upper chamber, were performed to assess its effect on the syngas quality. The assessment revealed that the packed material increases the carbon monoxide (CO) content in the syngas outlet stream while carbon dioxide (CO2) was reduced. This option appears to be a suitable and low-complexity alternative for enhancing the content of energy vectors of syngas in gasification at atmospheric pressure since CO/CO2 ratios of 5.18 and 3.27 were achieved against reported values of 2.46 and 0.94 for operations which did not include the addition of packed material. It is concluded that the upper packed-bed is an active element able to modify syngas characteristics since CO2 content was reduced.
Keywords: biomass; municipal solid waste; gasification; syngas shifting biomass; municipal solid waste; gasification; syngas shifting

As was mentioned, the test feedstock was composed of vegetable charcoal and MSW. Considering MSW can contain several components suitable for being differentiated by primary sorting, this initial activity was undertaken, and the results are reported in Table 5.
Sorting results show that kitchen waste is the dominant component in MSW. Regarding proximate and ultimate composition, the data generated for MSW and kernel shell charcoal are presented in Table 6 and Table 7, respectively. Data obtained from the literature is used for the purpose of comparison.
Results of the experimental assays are presented in Table 8. The figures present cold gas efficiency (CGE) values as well. This factor relates the inlet feedstock heating value with the outlet syngas heating value for explaining the thermal efficiency of the process [50].
To compare syngas compositions with reported data from literature sources, data were homogenised to a nitrogen-free basis, and the CO/CO2 figures were calculated. The values are presented in Table 9.
Even if the packed bed activity is considered to be a relevant research topic by itself, in addition to its study in the context of the gasification case presented, thermal images were recorded reflecting the upper temperature range in order to show any potential activity to be reported. Thermal images of the upper chamber during O2 + air operation (front and side) with packed material addition are shown in Figure 3.
The implementation cost figures are presented for the purpose of comparing the economic incidence of this alternative if compared with other syngas enhancement methods. Even if the figures were obtained in a pilot facility, relative cost factors are shown in Table 10. It is relevant to mention that such figures, in the case of implementation costs, were obtained from the construction report carried out during the building stage of the experimental gasification facility. Since the upper chamber and the remaining parts of the gasification reactor have similar structures, the cost factors were obtained by using unit costs and relative dimensions. The baseline cost (cost factor = 1) refers to the gasifier without the upper chamber required for implementing the shifting proposal.
In the case of the operating costs, the variation in the cost factor is calculated by considering additional worker-hours, plus supplies required for preparing the packed material.

Results showed that adding a packed bed as part of a gasifier is suitable as a low-complexity gas-shift alternative, since it was proved to perform correctly under atmospheric pressure conditions and in the absence of sophisticated auxiliary services, such as the gas compression facilities of moving bed gasification configurations. This was demonstrated by comparing the syngas composition of several gasification experimental experiences. The CGE of gasification could be increased by at least 24.6% without significantly compromising economic aspects or technical considerations.
Regarding the specific effect of the packed bed on syngas quality, it is noted that the obtained values of the CO/CO2 ratio are shown to be remarkably higher than figures reported for other gasification experimental experiences. Therefore, it can be suggested that the dominant effect of the packed-bed is CO2 adsorption.

The patent entitled “Gasificador para mezclas de biomasa sólida con distintos contenidos de humedad” (IEPI MU 2016-185) is related to the work described in this document, and was granted by the Ecuadorian Patent Office in April 2016. 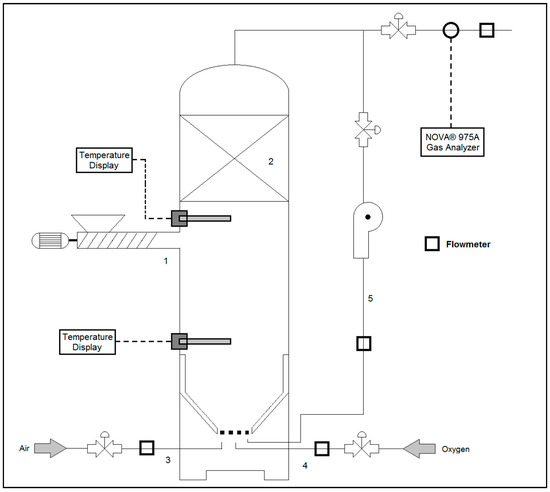