Analysis of the Effect of Vehicle, Driving and Road Parameters on the Transient Performance and Emissions of a Turbocharged Truck

2. Dynamical Modeling of a Grid-Connected System with Multiple PV Units

A grid-connected PV system usually comprises a PV array along with the maximum power point tracking (MPPT) system where this tracker is used to track maximum power under changing atmospheric conditions. Since the output power of the PV array is small, a DC-DC boost converter is used to achieve the desired voltage across the DC-link capacitor which is also the input voltage to the voltage source inverter (VSI). In this work, it is considered that the maximum power is extracted from the PV unit through the MPPT and the desired voltage is achieved across the DC-link capacitor. For this reason, the dynamics of the DC-DC converter is not considered during the modeling and another reason for such a consideration is that this work mainly stresses on the current injection into the grid with the power quality. Therefore, the model is basically developed based on the dynamics of the DC-link voltage and current injecting into the grid. The following subsections include the dynamical models of multiple PV units in a grid-connected PV system by considering all possible configurations.

2.1. Dynamical Modeling of a Single PV Unit Connected to the Grid

The dynamical model is first developed for a three-phase grid-connected system with a single PV unit. Figure 1 shows a grid-connected system with a single PV unit where a VSI is used as an interface. In Figure 1, the voltage across the DC-link capacitor (C) is while the filter resistance and inductance are represented by and , respectively. A transformer with an inductance along with the transmission line having resistance and inductance is used to deliver power into the grid. By considering the output-side of the VSI, the dynamics of the currents for the three-phase grid-connected PV system in Figure 1 can be written as follows [28,29]: where , , represents three currents following through three phases, represents three voltages for three phases at the grid connection point, and represents three switching signals for the three-phase VSI.
By considering the input-side of the VSI, the dynamic of the DC-link voltage can be written as follows: where is the output current of the PV unit.
By employing transformation, the complete dynamical model of a grid-connected PV system with a single PV unit can be written as follows [30]:
The dynamical model as represented by Equation (3) can be considered as the basis for developing the same for grid-connected PV systems with multiple PV units. The dynamical model for grid-connected systems with multiple PV units are developed in the following subsection where all PV units are directly connected to the grid.

Figure 2 shows a grid-connected system with multiple PV units where all PV units are directly connected to the grid through the VSI, filter, transformer and transmission/distribution line. The dynamical model of the system in Figure 2 will be exactly similar to that of the grid-connected system with a single PV unit. Thus, the dynamical model of ith PV unit can be written as follows: with and with .

2.3. Dynamical Modeling of a Grid-Connected System with Multiple PV Units Connected through a PCC

Figure 3 shows another configuration for the grid-connected system with multiple PV units where all PV units are first connected to a PCC through the VSI, filter, transformer and transmission/distribution line. The PCC is then connected to the grid via a transmission/distribution line with the resistance and inductance . In this case, the dynamical model will be different from previous cases. The current for ith PV unit flowing through different phases can be written as follows: where , , , , , for all three phases. The last terms in Equation (5), i.e., , , and represent the dynamic interactions which have sinusoidal characteristics. However, these terms are converted into -frame later in this subsection to further simplify the analysis. The dynamic of the DC-link voltage will remain similar to that of the previous case.
In –frame, Equation (5) along with the dynamic of the DC-link voltage can be written as follows:

2.4. Dynamical Modeling of a Grid-Connected System with Multiple PV Units Interconnected through Lines

Figure 4 shows the interconnection of multiple PV units through different lines rather than connected through a PCC. In this configuration, all PV units are strongly coupled through lines with resistance and inductance between bus-i and bus-j. From Figure 4, the current for ith PV unit flowing through different phases can be written as follows: where , , for all three phases, for all three phases, is a flow function which represents the existence of current flow through the interconnecting line due to other PV unit, and represents the interconnection between different PV units. The value of will be zero when there are no current flow and it will be one if there exists current flow. Similarly, the value of will be zero if there are no interconnections while it is one if there are interconnections.
The dynamic of the DC-link voltage will remain similar to that of all previous cases. In –frame, Equation (7) along with the dynamic of the DC-link voltage can be written as follows: where
Equations (4), (6), and (8) represent the generalized dynamical models for three different configurations. The following section includes a theoretical analysis of dynamic interactions based on these dynamical models.

From the dynamical models of multiple PV units in the first configuration as shown in Figure 2, it can be seen from Equation (4) that there are no direct interactions among different PV units. However, there will still be some dynamical interactions which are mainly through the grid connection points. In this case, the output current of each PV unit will contain some harmonics and the THD will be increased with an increase in the number of PV units.
For the second configuration in Figure 3, there are dynamic interactions which can be seen from Equation (6). These interactions are mainly due to the voltage drop for flowing current in the line from other PV units where the line connects the PCC with the grid. In this case, the THD will be slightly less than the first configuration as the output current of each PV unit flow through an additional inductance which is also obvious from the term in Equation (6).
The configuration in Figure 4 is quite complicated and thus, the dynamical model as represented by Equation (8) is also more complicated. In this model, the interactions mainly depend on the flow of the current as well the the coupling between lines. The dynamic interactions among different PV units in Figure 4 are more than all other configurations due to additional lines which establish connections among all PV units within the grid-connected system. This phenomenon is also obvious from Equation (8) from where it can be seen that it includes more additional terms than any other configurations. However, the THD will be less in this case because the value of inductance () through which the current flows is much higher than all other configurations. Simulation results are carried out in the following section to further justify these analyses.

T.F.O. has conducted all simulation studies and put the results together along with the detailed analysis. M.A.M. was responsible for generating the key idea in the paper, formulating the mathematical modeling, and finalizing the draft. A.M.T.O. has provided some suggestions to during the formulation of the concept as well as to improve the quality of the presentation. 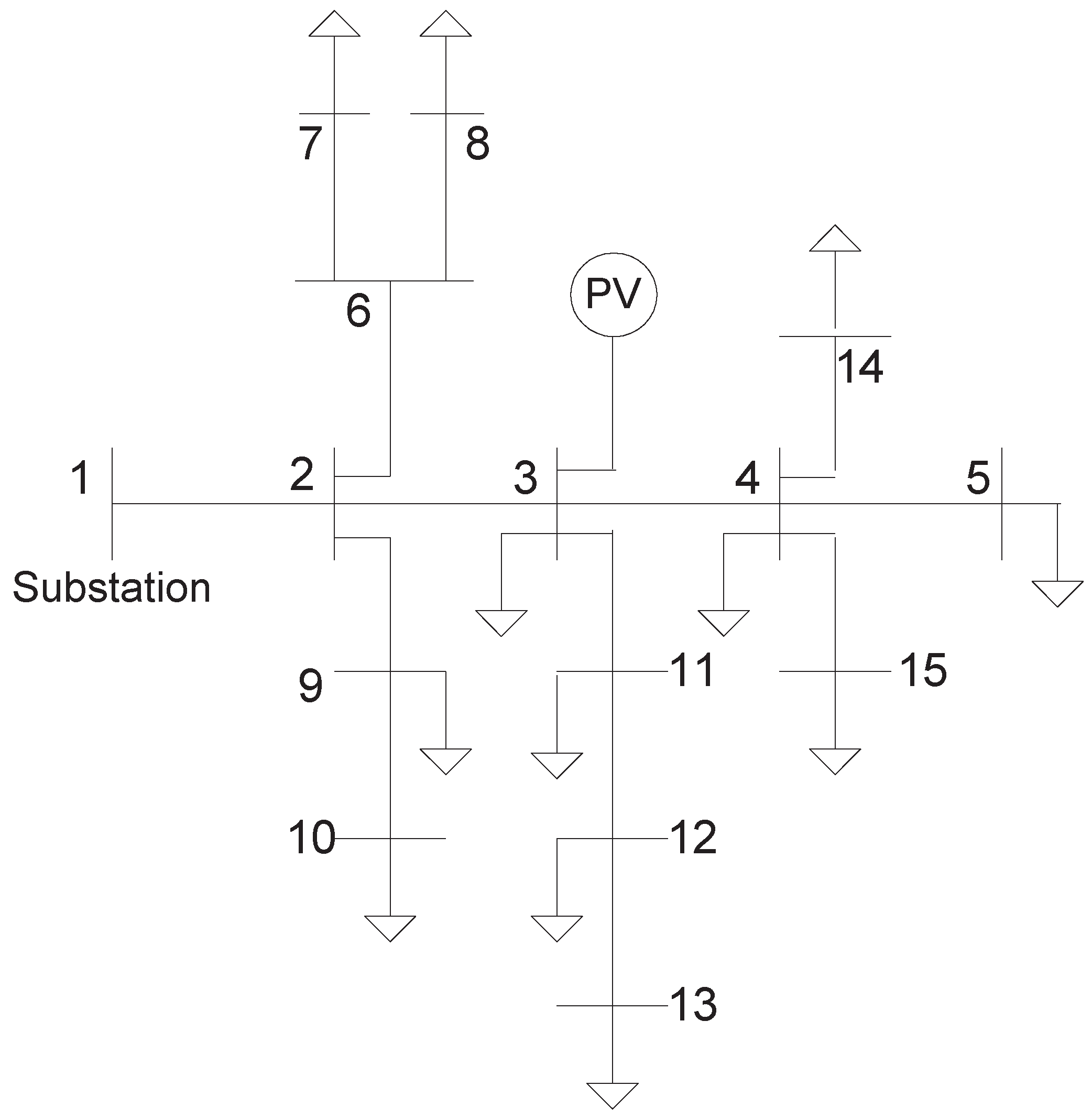 Table 1. Line Parameters.
Table 1. Line Parameters.
© 2018 by the authors. Licensee MDPI, Basel, Switzerland. This article is an open access article distributed under the terms and conditions of the Creative Commons Attribution (CC BY) license (http://creativecommons.org/licenses/by/4.0/).
We use cookies on our website to ensure you get the best experience. Read more about our cookies here.
Accept
We have just recently launched a new version of our website. Help us to further improve by taking part in this short 5 minute survey here. here.
Never show this again