Mechanism and Prevention of a Chock Support Failure in the Longwall Top-Coal Caving Faces: A Case Study in Datong Coalfield, China

Longwall chock support failures seriously restrain the safety and high-efficiency of mining of extra thick coal seams, as well as causing a great waste of coal resources. During longwall top-coal caving (LTCC), the influential effect of the properties and the movement regulation of top-coal on strata behavior cannot be ignored, since the top-coal is the medium through which the load of the overlying strata is transferred to the chock supports. Taking Datong coalfield as an example, the mechanism of a chock support failure in the LTCC face was investigated. Research findings indicated that the hard top-coal and insufficient chock support capacity were primary reasons for chock support failure accidents. On account of the field-measured results, a new method to determine support capacity was proposed, which fully took the impact of the top-coal strength into consideration. The calculation revealed that the required support capacity had exceeded the existing production maximum, at about 22,000 KN. Since it was unrealistic to simply increase chock support capacity, other approaches, according to the theoretical analysis, were proposed, such as lowering the integrity and strength of the top-coal, and upgrading its crushing effect to weaken the support load effectively during the weighting period, which reduces the likelihood of chock support accidents occurring. Based on this, hydraulic fracturing for hard top-coal and optimization of the caving process (chock supports raised up and down repeatedly by manual operation before moving forward) were presented. The proposed solutions were successfully applied in LTCC-west8101 for subsequent mining and achieved substantial benefits. The above research provides valuable references and ideas for the control of strata behavior to ensure safe and highly efficient mining in extremely thick and hard coal seams with the LTCC method. View Full-Text
Keywords: extra-thick and hard coal seam; longwall top-coal caving (LTCC); strata behavior; chock support failure extra-thick and hard coal seam; longwall top-coal caving (LTCC); strata behavior; chock support failure
►▼ Show Figures 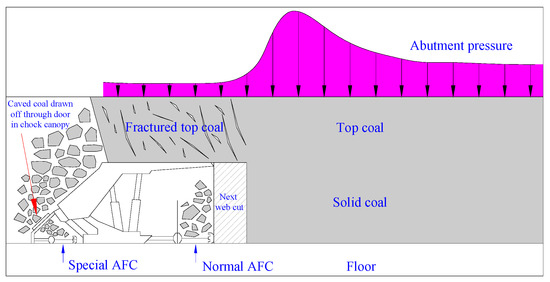