Permeability Evolution of Pyrolytically-Fractured Oil Shale under In Situ Conditions

Oil shale is an attractive supplemental energy source for petroleum. The reserve of oil shale may be estimated at a trillion tons [1]. The oil shale retorting technology has a long history and different technologies have been developed [2,3,4,5,6]. Presently, in-situ mining technology is gaining more attention because of its advantages [7]. China is rich in oil shale reserves with 4.76 × 1010 tons that could significantly increase the petroleum supply [8]. The in situ mining of oil shale is a potentially environmentally friendly method to recover hydrocarbons as excavation, retorting, then spoiling is not required. In the in-situ process of mining, heat is injected into the oil shale stratum and pyrolyzes the organic matter. Then, the shale oil and hydrocarbon gas can be recovered [9,10,11,12]. The advantages of such in-situ mining involves no large-scale mining, nor equipment, nor waste-rock production and allows for the control of environmental pollution.
Permeability is a key parameter which controls the potential to recover the retorted chemicals from the geological host. Many factors influence rock permeability—paramount among them are effective stresses and temperature. At room temperature (RT), the permeability of intact and fractured rocks, generally decreases with increasing effective stresses [13,14,15,16,17]. Permeability may be enhanced by thermal fracturing when the rock is heated to a high temperature. The permeability of Beishan and Daqing granites, when heated then cooled to RT, has been shown to first increase slowly at low temperature, then increase as temperature transits from 20 °C to 900 °C. The threshold value of permeability for Beishan granite is between 300 °C and 400 °C and for Daqing granite between 200 °C and 300 °C [18]. The permeability evolution of Luhui granite shows a threshold temperature (Tc) for permeability change that activates permeability in the thermally cracked granite. The magnitude of permeability is 10−7D with only a slight increase below Tc with permeability increasing dramatically from 10−6D as temperatures approach 300–400 °C to 10−5D at 400 °C [19]. This threshold temperature for permeability gain in sandstone has been identified as 400–500 °C. The initial permeability of sandstone (under certain pressure conditions) has been found to have a nonlinearity with a rising temperature [20]. Zhang performed real-time permeability experiments on fine-grained feldspar-rich sandstone where permeability first increases at low temperature, then increases abruptly at a threshold temperature of 200 °C, then decreases at temperatures between 200 °C and 400 °C, before finally increasing from 400 °C to 600 °C [21].
These studies mainly focus on permeability evolution with temperature of rocks composed of inorganic minerals. Few studies explore the permeability of organic-rich rocks such as coal and oil shale at incremented temperature. However, such studies are important for underground coal gasification and in-situ extraction in oil shale and low-rank coal by injecting heat. Understanding the permeability sensitivity to reservoir temperature change is crucial to defining fluid flow as an increase temperature may cause a loss in productivity in oil and gas wells. Permeability of low-rank lignite exhibits an increasing and periodic change at temperatures from RT to 650 °C [22]. Feng et al. [23] investigated the permeability of anthracite and coal at high temperature and under triaxial stresses and found that coal permeability could be divided into three stages by a critical temperature and peak temperature from RT to 600 °C. The critical temperature of anthracite is from 150 °C to 200 °C with a peak temperature between 450 °C and 500 °C. For coal, these range from 200 °C to 250 °C for the critical temperature of coal with no peak temperature emerging from RT to 400 °C. Kang et al. [24,25] reported results for heated Fushun oil shale where a small quantity of micro—fissures formed in the specimen mainly along the original bedding and at the boundaries of hard mineral particles under 300 °C. The thermal fissure surfaces are sub-parallel to the original bedding. The quantity, length and width of the fissures increased rapidly at above 300 °C due to chemical reactions within the oil shale. The corresponding permeability was measured at temperatures to 500 °C showing that permeability dramatically grew at about 350 °C. Zhao et al. [26] also analyzed the law of pore structure and porosity of Daqing and Yan’an oil shale by computed tomography (CT) imaging and found out that organic matter thermal decomposition at high temperatures led to changes in the structure of Daqing oil shale. When the temperature reached 200 °C, many pores were developed in the original sample. At high temperature, organic matter began to decompose, and then the gas and oil was generated, and lastly many pores were formed. With the temperature rising, the number of the pores increased and became interconnected by cracks that also formed. Heterogeneous thermal dilation was a main factor leading to changes in the pore structure of Yan’an oil shale. At 200 °C, many fractures parallel to the primary bedding were developed, which expanded with the rising temperature. The internal structure of oil shale was changed by high temperature and formed a porous medium including pores and cracks [26].
Clearly, the permeability evolution and sensitivity to temperature is a key parameter in the in-situ retorting of oil shale. Xinjiang is rich in oil shale resources and here we evaluate methods for the economic recovery at temperature up to 600 °C. We report on experiments on Jimusar oil shale from Xinjiang at in situ triaxial stresses and at temperatures to 600 °C.

Large block samples of oil shale were collected from an open-pit mine in Jimsar, Xinjiang province in China. They were coated with paraffin wax to maintain them in their natural water-saturated state. Cylindrical samples were then cored from these block samples and turned on a lathe to standard size of 50 mm in diameter and 100 mm long. The longitudinal axis of all samples was perpendicular to bedding. The samples are gray (Figure 1) and have a silty structure with a density of 2.40 g/cm3. Proximate analysis and elemental analysis of samples are shown in Table 1 and Table 2. The diameters of three samples are 48.87 mm, 49.27 mm and 49.20 mm, respectively. The average diameter is 49.11 mm with standard deviation of 0.17 mm.

A loading frame and core holder capable of applying and sustaining high temperature and triaxial stresses was employed to perform the permeability measurements at temperatures to 600 °C and at stress to 15 MPa. An axial stress is applied by a hydraulic piston and confining pressure applied by compressed gas. The sample was sheathed and sealed in red copper as shown in Figure 2. Temperature in the sample was measured by thermocouple with a heating rate of 15 °C/h applied and controlled by the heating system.
Two in-situ ground stress levels were applied to the samples. For samples 1# and 2#, an axial stress of 12.5 MPa and a confining stress of 15 MPa were applied. This corresponds to a burial depth of 500 m. Hence, the axial stress on sample 1# and 2# is uniform due to almost equal diameter in these two samples. For sample 3#, equal axial and confining stresses of 25 MPa was applied–corresponding to a burial depth of 1000 m. Triaxial stresses were first applied to samples at RT, followed by permeability measurement. The samples were then heated to target temperatures from 50 °C to 600 °C in 50 °C steps. Each target temperature was sustained for 2 h in order to ensure a uniform temperature distribution in the samples. This was then followed by nitrogen permeability measurements. Due to the discharge of pyrolysis-induced gas during heating, permeability measurement was performed only after the complete discharging of that gas.

The steady flow method was used to measure permeability change in the oil shale, at different temperatures, up to 600 °C. The permeability was calculated from Darcy’s law as:where k, μ, Q, L, A are gas permeability in m2, nitrogen dynamic viscosity at appropriate temperatures in , measured flow rate through sample in m3/s, length of sample in m, and sectional area of sample in m2, respectively. , , denote standard atmospheric pressure in MPa and nitrogen pressure of the inlet and outlet (MPa).

3.2. Effect of Stress on Permeability of Oil Shale at High Temperature 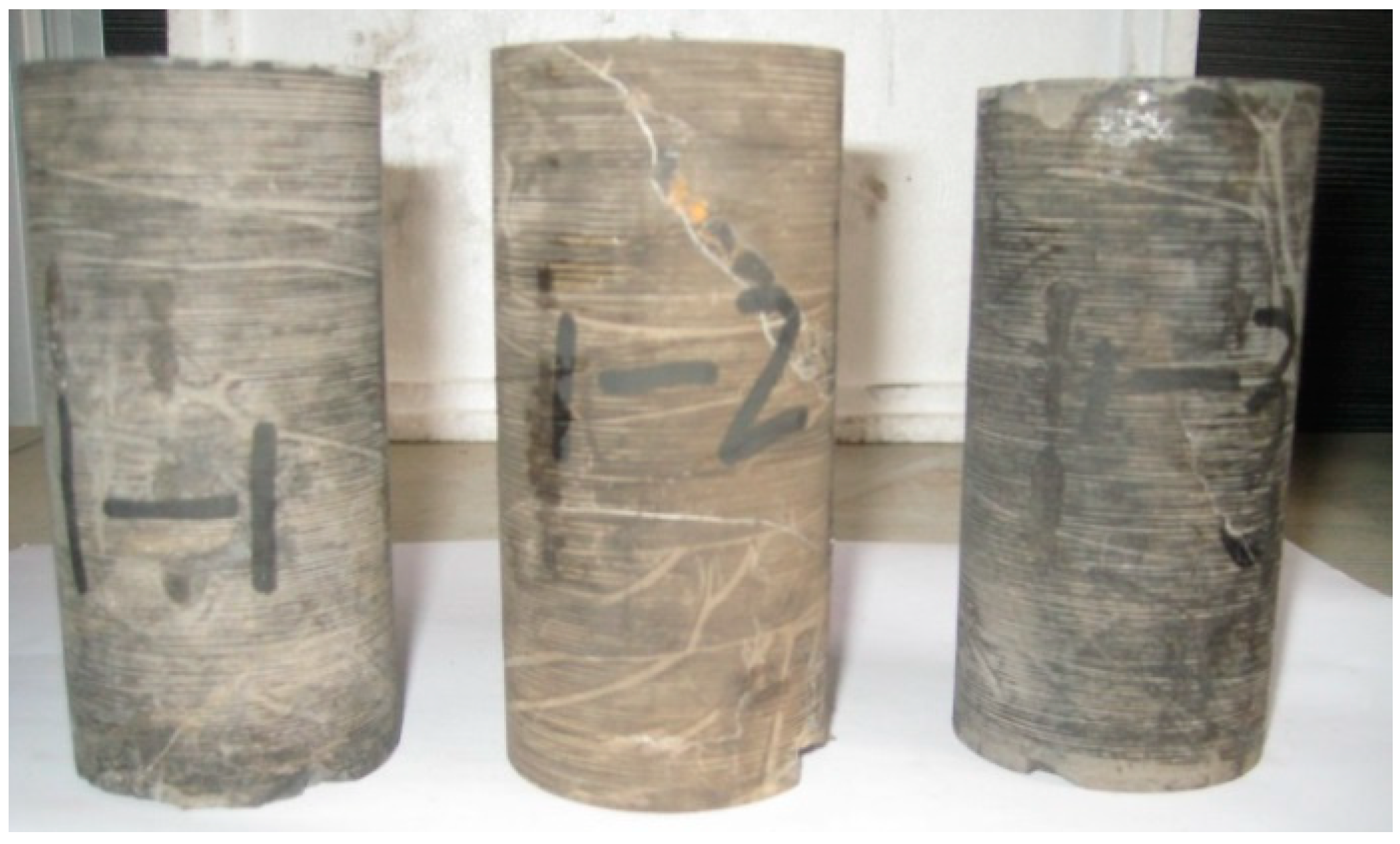 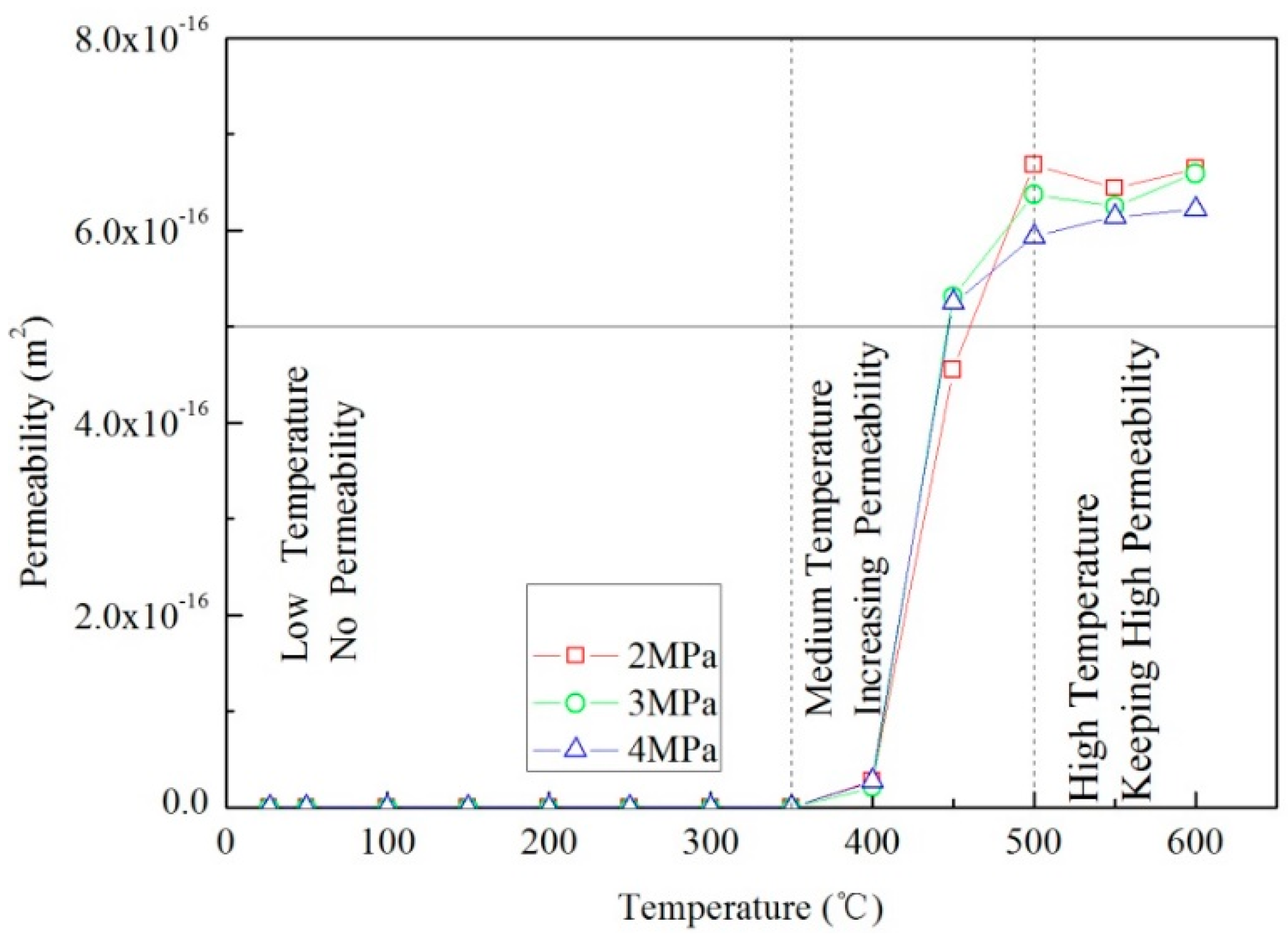 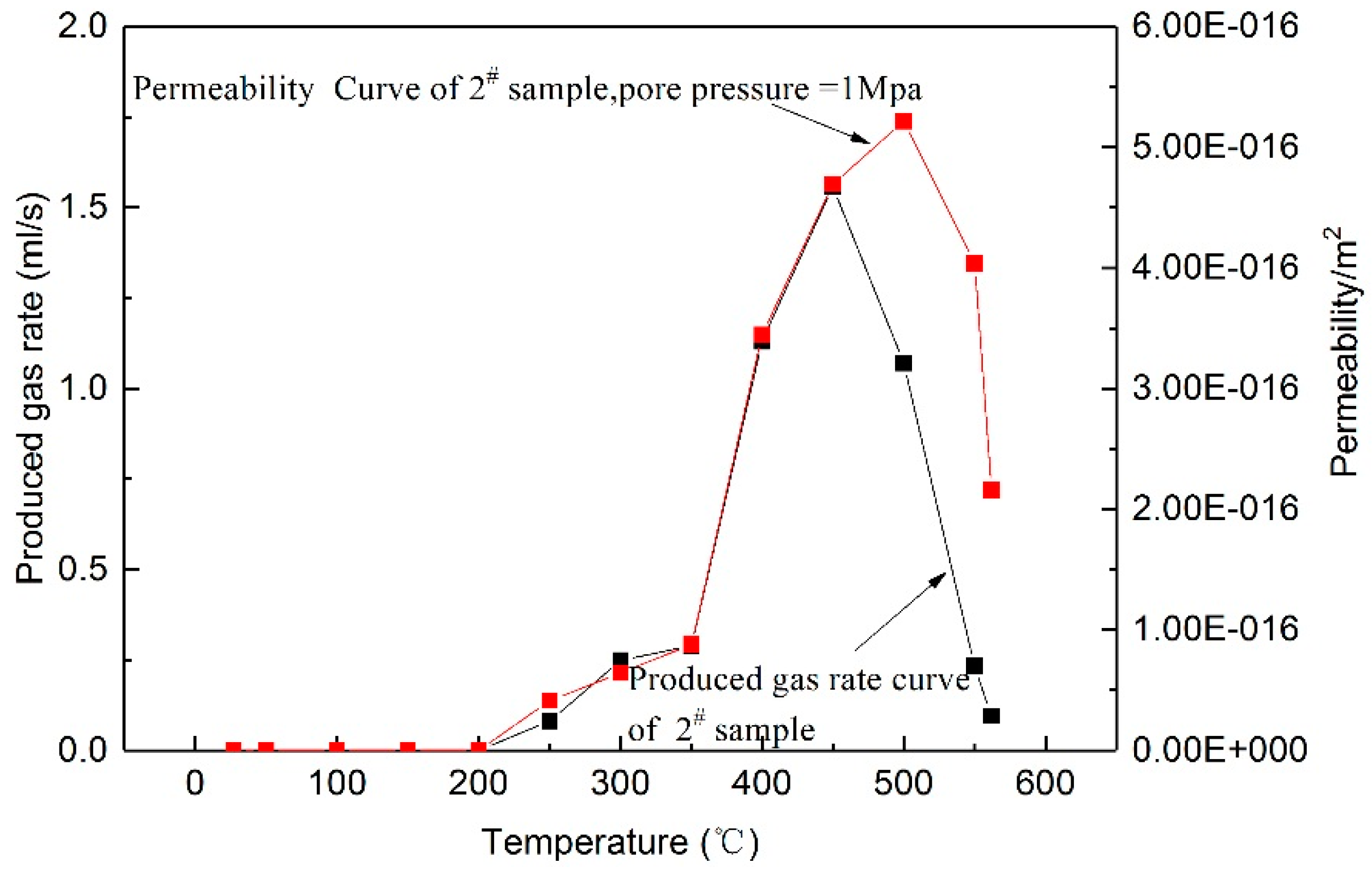