Biomass Chars: The Effects of Pyrolysis Conditions on Their Morphology, Structure, Chemical Properties and Reactivity

The objective of this study was to study the structure and physicochemical properties of biochar derived from apple tree branches (ATBs), whose valorization is crucial for the sustainable development of the apple industry. ATBs were collected from apple orchards located on the Weibei upland of the Loess Plateau and pyrolyzed at 300, 400, 500 and 600 °C (BC300, BC400, BC500 and BC600), respectively. Different analytical techniques were used for the characterization of the different biochars. In particular, proximate and element analyses were performed. Furthermore, the morphological, and textural properties were investigated using scanning electron microscopy (SEM), Fourier-transform infrared (FTIR) spectroscopy, Boehm titration and nitrogen manometry. In addition, the thermal stability of biochars was also studied by thermogravimetric analysis. The results indicated that the increasing temperature increased the content of fixed carbon (C), the C content and inorganic minerals (K, P, Fe, Zn, Ca, Mg), while the yield, the content of volatile matter (VM), O and H, cation exchange capacity, and the ratios of O/C and H/C decreased. Comparison between the different samples show that highest pH and ash content were observed in BC500. The number of acidic functional groups decreased as a function of pyrolysis temperature, especially for the carboxylic functional groups. In contrast, a reverse trend was found for the basic functional groups. At a higher temperature, the brunauer–emmett–teller (BET) surface area and pore volume are higher mostly due to the increase of the micropore surface area and micropore volume. In addition, the thermal stability of biochars also increased with the increasing temperature. Hence, pyrolysis temperature has a strong effect on biochar properties, and therefore biochars can be produced by changing pyrolysis temperature in order to better meet their applications. View Full-Text
Keywords: biochar; pyrolysis temperature; apple tree branch; physicochemical properties; structural biochar; pyrolysis temperature; apple tree branch; physicochemical properties; structural
►▼ Show Figures 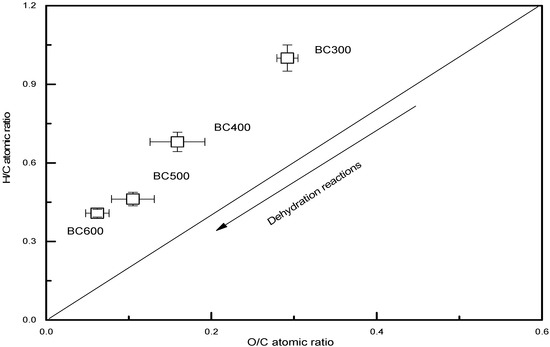