2. Analysis of Forces on Contamination Particles near Insulator

It is necessary to clarify the forces on contamination particles in the study of motion of natural contaminants. According to the difference of material form, the contamination particle is considered as dispersed solid phase, and the air is a continuous gas phase, the surface of the insulator is the fluid–wall boundary [11,20,21]. The volume fraction of dust particles in the atmosphere is very small, which is sparse discrete phase, the effect of the particles on the air flow and the interaction between particles can be neglected [10,22].
The forces on the contaminant particle moving near the insulator can be classified into two types: the force produced by fluid flow and the force produced by external physical field. The fluid forces include drag force, Magnus spin lift force, Saffman shear lift force, pressure gradient force, and so on. Wherein, the drag force has a most important role, the other forces are too small to be considered in the motion. The external physical field forces include gravity, polarization force, electric force and magnetic force, etc. Because the high intensity of the electrical field near the high voltage end of insulator, the effect of electric force on contamination particles should be considered while neglecting the effect of very small polarization force [13,23].

As a single spherical particle moving in the atmosphere, the drag force can be expressed as [23] where CD is the drag coefficient, up is the velocity of spherical particle relative to fluid, Ap and dp are the projection area and diameter of spherical particle, ρ is the fluid density.
The drag coefficient CD is related to Reynolds number Re which is the ratio of inertia force and viscous force in physics. There is a complex airflow field near the insulator, and the Reynolds number has a spatial distribution. When the spatial position of the particle is changed, the air drag force is very different. Therefore, the acting of drag force on contamination particle is a transient process, the magnitude and direction of the drag force could be calculated according to a certain time and position.

In the electric field, especially the DC ionized field, the contaminant particles are charged during moving. A majority of charged particles by field charging in atmosphere have a diameter size between 1 μm and 100 μm whose ratio is about 90% [11,13]. Saturated quantity of electric charge on each particle can be calculated as [24] where Ep is the maximum external electric field density as the particle has saturated charges in the non-uniform electric field, dp is particle diameter, εr is the relative permittivity of particle, ε0 is the permittivity of free space. The Ep is distributed in space; the particles in a non-uniform electric field have different saturated charge. In considering a small range of particle charges, to reduce the complexity of analysis, it can be considered that Ep has a uniform value.
The particle has saturated charges, the electric force Fe is where E0 is the background electric field density at the position where the charged particle is.

The drag force and electric field force is the parameters changing with time and space, thus the three dimension simulation is essential for studying the contamination particles motion. The finite element method was applied in the simulations of the electric and fluid fields. The forces on the particles are derived from the mechanical action of the electric field and flow field on the dispersed phase particle. Particle trajectory and motion state can be calculated by forces.

3.1. The Model and Calculate Condition

The study object is the contaminant particles moving around the high voltage end of the ±800 kV composite insulator. Referring to the practical insulator with a length of 10.2 m, creepage distance is 35.1 m [25], the simulation model of high voltage end was built after simplifying some fittings and details of sheds. It is shown in Figure 1. The simplified model is 1 m full length—which has a 0.2 m metal joint and a 0.8 m insulate rod with 50 mm diameter—only has sheds at the high voltage end in which the bigger shed diameter is 246 mm; the middle shed diameter is 186 mm. The spherical particles were used to simulate the contaminant dust [20]. From the contamination data in the field [26], the contamination particles with diameter is 20 μm accounts for the majority of the contamination samples, and the major component of insoluble matter is SiO2. So, the physics parameters of contaminant particles were that the particle diameter is 20 μm, the bulk density of SiO2 is 2200 kg/m3, the relative permittivity is 4 [27].
The insulator string and the surrounding space are symmetrical. In order to save the computing resources, the geometry and the calculation domain are built up with the 1/2 part based on the axial section of insulator. The background electric field near the high voltage end of the insulator was established which is similar with the one around the ±800 kV composite suspension insulator [25]. The distribution of electric field intensity is shown in Figure 2.
In the fluid field simulation, Reynolds average Navier–Stokes equation (RANS) and k-ε turbulence model were applied [21]. The initial airflow velocity at inlet was set to 1, 2, 3, and 5 m/s, and the direction was perpendicular to the insulator axial. The outlet condition was zero pressure diffusion. In the component of particle tracing for fluid flow, the release velocity of particles was consistent with the airflow velocity in turbulent flow component; the electric force and drag force were added as the factors affect the particle motion in the component. The state of particle when contacting the surface of the insulator can be described in that it sticks to the contact position, and motion parameters maintain the value at the moment of contact, and it can be called as frozen.
All particles were charged uniformly, and the charge on each particle reached saturation value as the Ep was set to 200 kV/m. The polarity of space charges in the vicinity of conductor of the DC transmission line is similar to the conductor’s, and the charged particles have the same polarity as the high voltage end of the insulator [15,28,29]. A transient solution was applied to simulate the particle tracing. The simulation time was 1 s, and time step was 0.01 s.
There were three components be used for simulation modeling. Firstly, the electric field near high voltage end of insulator was calculated in the electrostatics component, the data of electric field were used as values of variables not solved in the static turbulence study. Secondly, the turbulent flow component was used to simulate fluid field. As the things above mentioned, the data of electric field and fluid field were saved in the static turbulence study. Thirdly, for studying the moving processes of contamination particles, the component of particle tracing for fluid flow was applied to calculate the motion state of particles with the gravity, drag force, and electric force which was taken from static turbulence study. The particle charge was set as a particle property in particle tracing component calculated by Formula (2) when a value of Ep was specified.

When the airflow entrance velocity V0 was 3 m/s, the airflow velocity distribution near the insulator model is shown in Figure 3. There was a small area of airflow deceleration zone on the windward side of insulator, the airflow velocity in the vicinity of insulator was less than the entrance velocity. There was a wide range of low velocity zones on the leeward side, but the air velocity increased gradually as airflow was moving away from the insulator.
Considering the particles had been charged saturated which still had a certain distance away from sheds. The saturated charge on single particle was 4.4505 × 10−15 C which is set to 1 p.u., as Ep = 200 kV/m. The time of releasing contamination particles from entrance is 0 s. A majority of particles had arrived at the leeward side of sheds after 0.4 s with the help of gravity, electric force, and airflow drag force, a part of them were frozen when contacting the sheds. At this moment, the position of contamination particles is shown in Figure 4. The distribution of the contamination particles on the sheds as the charge Q on single particle was 1, 10, 30, and 50 p.u. is shown in Figure 5. The most of particles contacted to sheds were frozen on the lower surface, and a few of them were stay on the edge of sheds. It is revealed that the contaminants tend to accumulate on the lower surface of sheds at the high voltage end of insulator. This phenomenon is similar with the practical contamination characteristics and distribution of DC insulators [30,31,32]. Similarly to the simulation results of this paper, in another study of contamination particle deposit characteristics considering the effects of electric force and air drag force with neglecting turbulent flow, the researchers in the theory analysis pointed out that the charged particles which have same polarity with conductors, deflected and hit the lower insulator surface as sweeping past the insulator.. In their scale model experiment, the deposition phenomenon of the bottom surface of sheds occurred [33].

4. Analysis of Characteristics of Forces and Motion

A rectangular plane that is perpendicular to windward, 604 cm2, was drawn. All force data of each particle in this plane were extracted for analyzing the characteristics of forces on particles closed to the sheds.

Research for this paper was supported by National Natural Science Foundation of China (Grant No. 51607126). 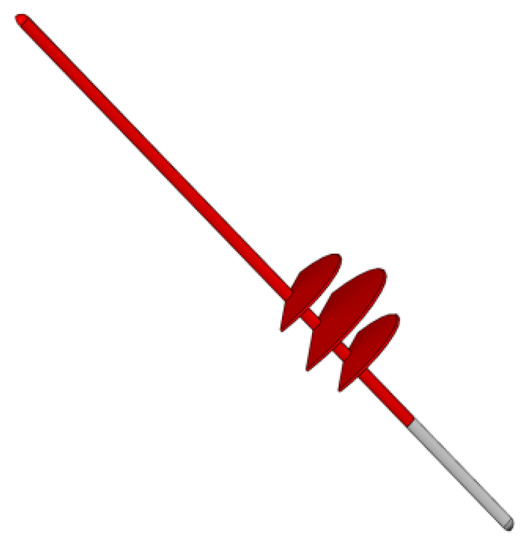 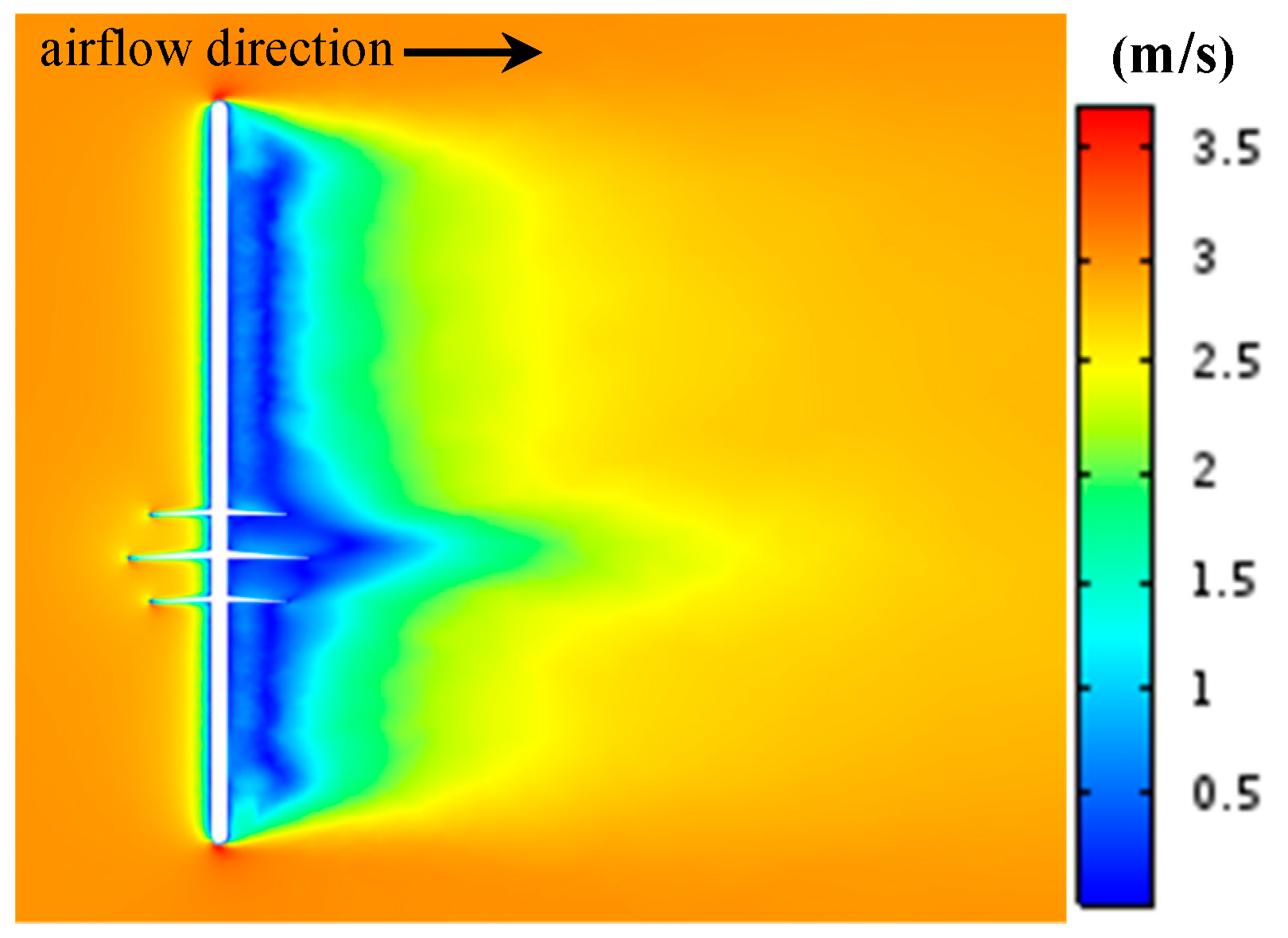 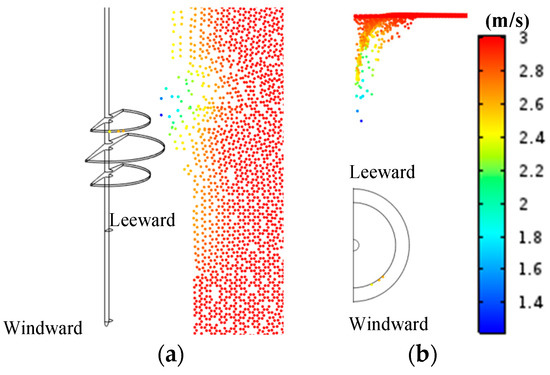 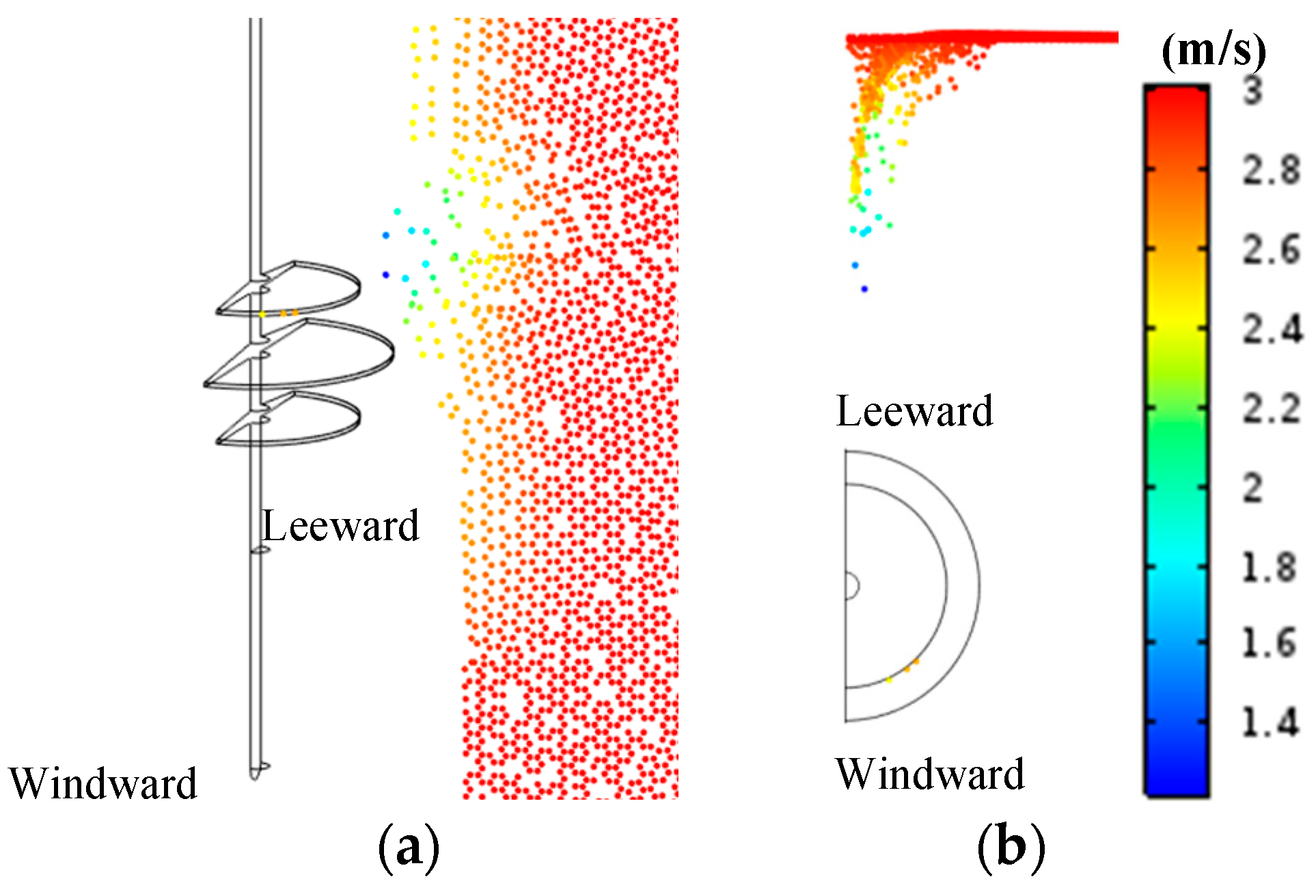 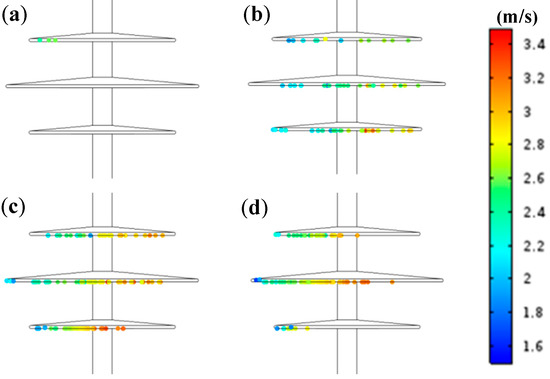 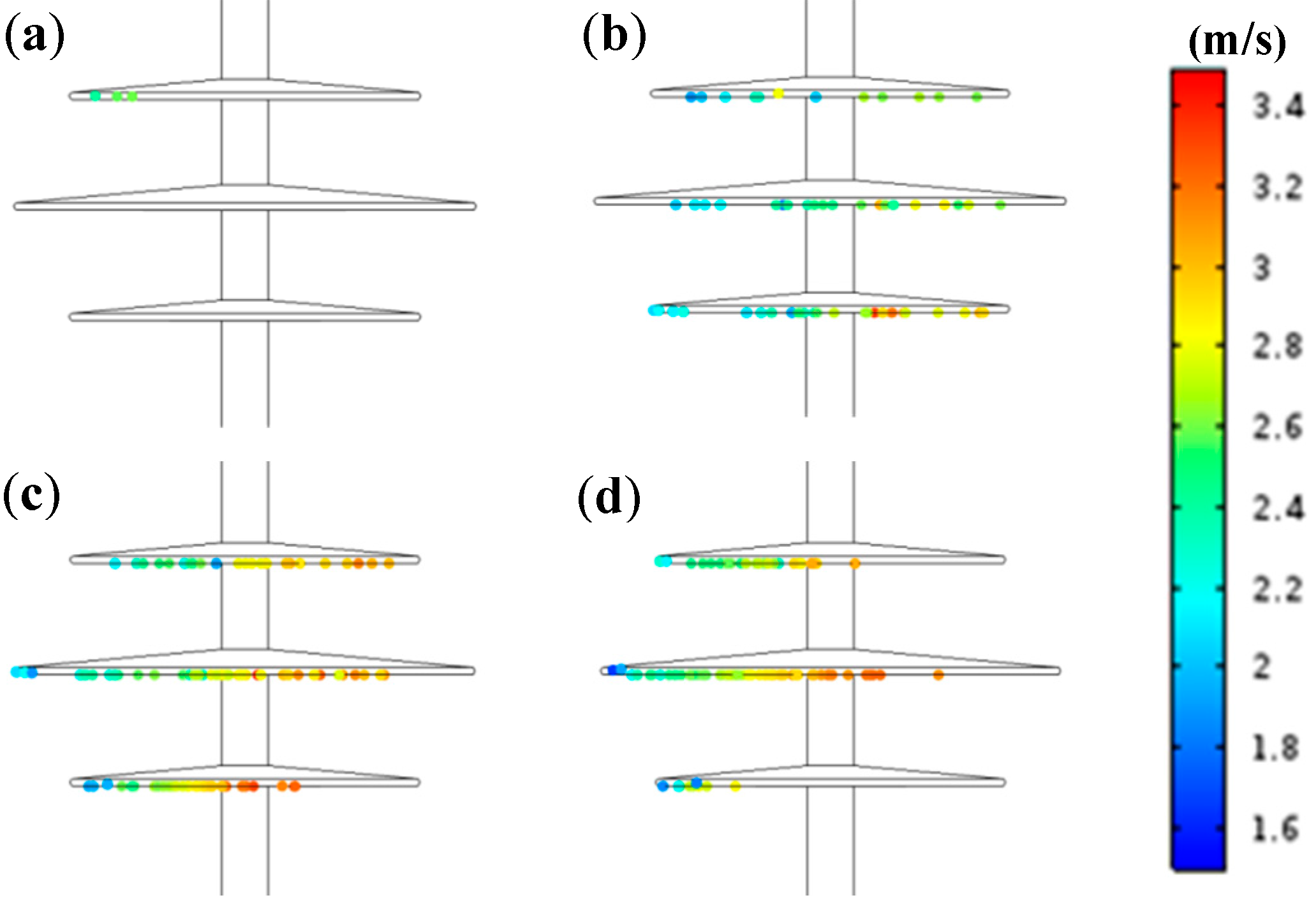 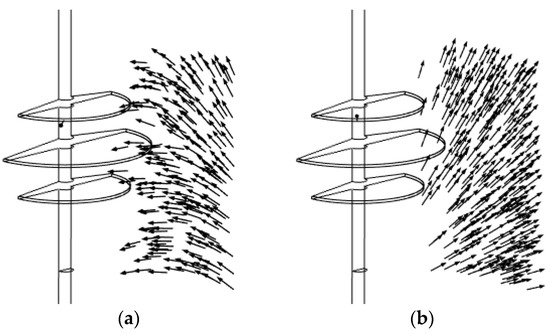 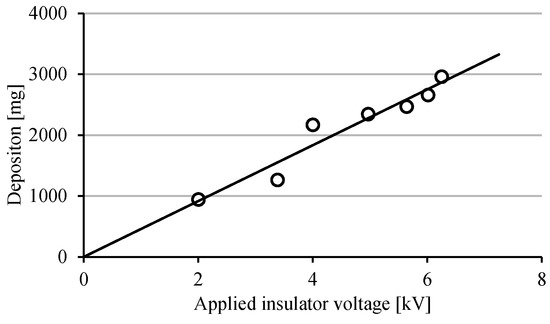 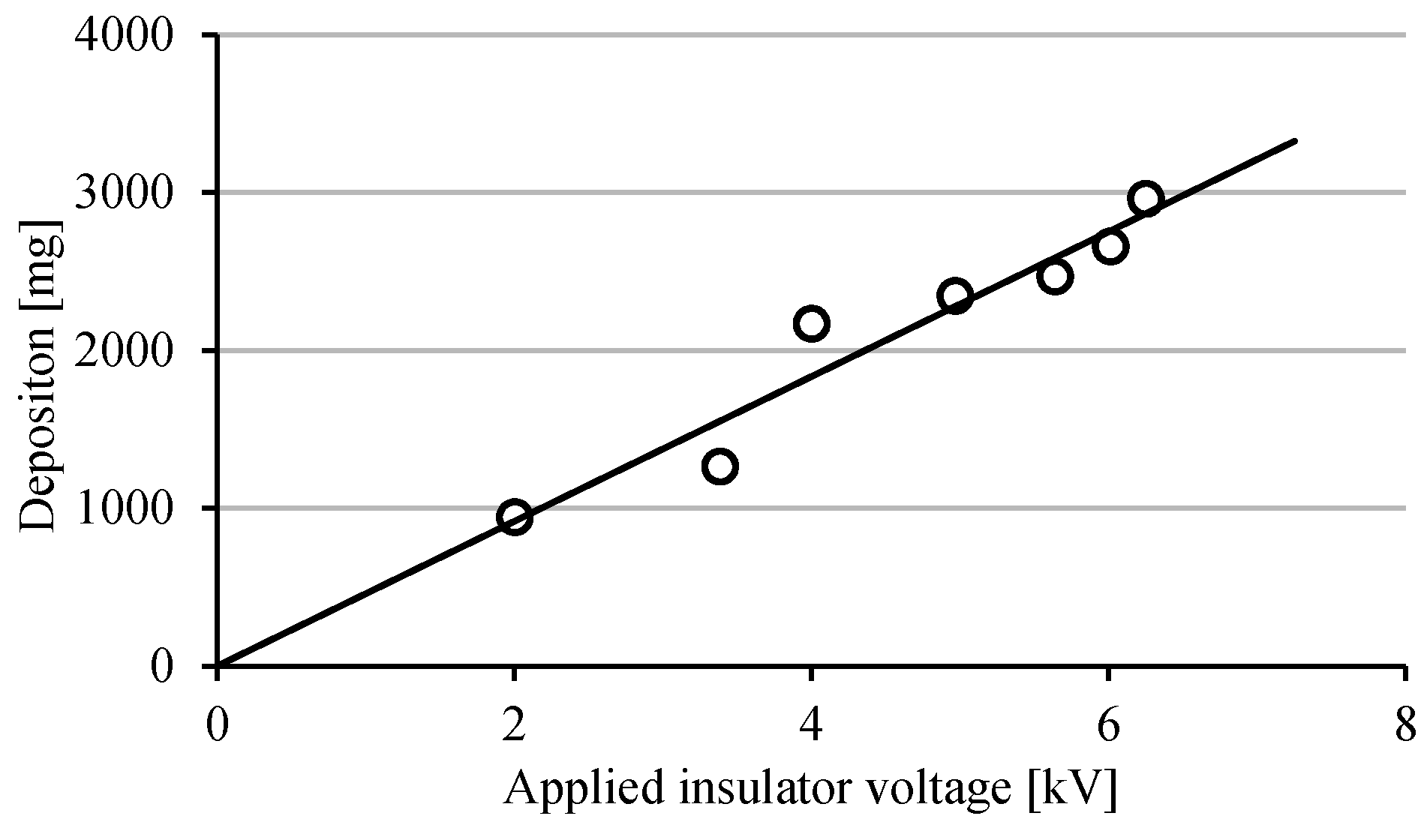