Hydraulic fracturing is an important method to enhance permeability in oil and gas exploitation projects and weaken hard roofs of coal seams to reduce dynamic disasters, for example, rock burst. It is necessary to fully understand the mechanism of the initiation, propagation, and coalescence of hydraulic fracture network (HFN) caused by fluid flow in rock formations. In this study, a coupled hydro-mechanical model was built based on synthetic rock mass (SRM) method to investigate the effects of natural fracture (NF) density on HFN propagation. Firstly, the geometrical structures of NF obtained from borehole images at the field scale were applied to the model. Secondly, the micro-parameters of the proposed model were validated against the interaction between NF and hydraulic fracture (HF) in physical experiments. Finally, a series of numerical simulations were performed to study the mechanism of HFN propagation. In addition, confining pressure ratio (CPR) and injection rate were also taken into consideration. The results suggested that the increase of NF density drives the growth of stimulated reservoir volume (SRV), concentration area of injection pressure (CAIP), and the number of cracks caused by NF. The number of tensile cracks caused by rock matrix decrease gradually with the increase of NF density, and the number of shear cracks caused by rock matrix are almost immune to the change of NF density. The propagation orientation of HFN and the breakdown pressure in rock formations are mainly controlled by CPR. Different injection rates would result in a relatively big difference in the gradient of injection pressure, but this difference would be gradually narrowed with the increase of NF density. Natural fracture density is the key factor that influences the percentages of different crack types in HFN, regardless of the value of CPR and injection rate. The proposed model may help predict HFN propagation and optimize fracturing treatment designs in fractured rock formations. View Full-Text
Keywords: hydro-mechanical coupling; SRM-based fracturing model; breakdown pressure; crack type; confining pressure ratio (CPR); injection rate hydro-mechanical coupling; SRM-based fracturing model; breakdown pressure; crack type; confining pressure ratio (CPR); injection rate
►▼ Show Figures 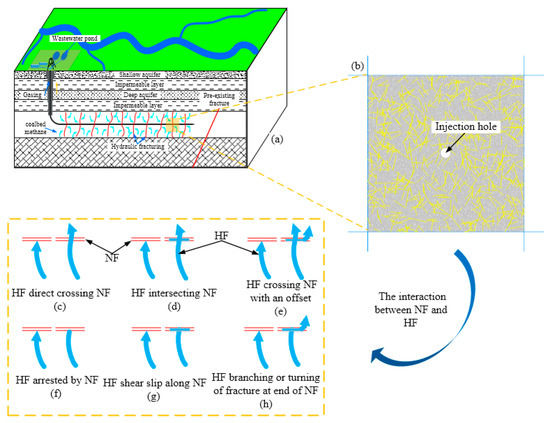