Policy and Environmental Implications of Photovoltaic Systems in Farming in Southeast Spain: Can Greenhouses Reduce the Greenhouse Effect?

Solar photovoltaic (PV) systems have grown in popularity in the farming sector, primarily because land area and farm structures themselves, such as greenhouses, can be exploited for this purpose, and, moreover, because farms tend to be located in rural areas far from energy production plants. In Spain, despite being a country with enormous potential for this renewable energy source, little is being done to exploit it, and policies of recent years have even restricted its implementation. These factors constitute an obstacle, both for achieving environmental commitments and for socioeconomic development. This study proposes the installation of PV systems on greenhouses in southeast Spain, the location with the highest concentration of greenhouses in Europe. Following a sensitivity analysis, it is estimated that the utilization of this technology in the self-consumption scenario at farm level produces increased profitability for farms, which can range from 0.88% (worst scenario) to 52.78% (most favorable scenario). Regarding the Spanish environmental policy, the results obtained demonstrate that the impact of applying this technology mounted on greenhouses would bring the country 38% closer to reaching the 2030 greenhouse gas (GHG) target. Furthermore, it would make it possible to nearly achieve the official commitment of 20% renewable energies by 2020. Additionally, it would have considerable effects on the regional socioeconomy, with increases in job creation and contribution to gross domestic product (GDP)/R&D (Research and Development), allowing greater profitability in agrifood activities throughout the entire region. View Full-Text
Keywords: photovoltaic systems; Spanish energy policy; agriculture; greenhouse; environmental objectives; socioeconomic development photovoltaic systems; Spanish energy policy; agriculture; greenhouse; environmental objectives; socioeconomic development
►▼ Show Figures 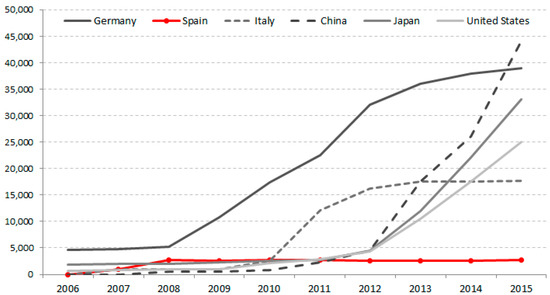