This study describes the development of a semi-physical, real-time nitric oxide (NO) prediction model that is capable of cycle-by-cycle prediction in a light-duty diesel engine. The model utilizes the measured in-cylinder pressure and information obtained from the engine control unit (ECU). From the inputs, the model takes into account the pilot injection burning and mixing, which affects the in-cylinder mixture formation. The representative in-cylinder temperature for NO formation was determined from the mixture composition calculation. The selected temperature and mixture composition was substituted using a simplified form of the NO formation rate equation for the cycle-by-cycle estimation. The reactive area and the duration of NO formation were assumed to be limited by the fuel quantity. The model predictability was verified not only using various steady-state conditions, including the variation of the EGR rate, the boost pressure, the rail pressure, and the injection timing, but also using transient conditions, which represent the worldwide harmonized light vehicles test procedure (WLTC). The WLTC NO prediction results produced less than 3% error with the measured value. In addition, the proposed model maintained its reliability in terms of hardware aging, the changing and artificial perturbations during steady-state and transient engine operations. The model has been shown to require low computational effort because of the cycle-by-cycle, engine-out NO emission prediction and control were performed simultaneously in an embedded system for the automotive application. We expect that the developed NO prediction model can be helpful in emission calibration during the engine design stage or in the real-time controlling of the exhaust NO emission for improving fuel consumption while satisfying NO emission legislation. View Full-Text
Keywords: in-cylinder pressure; NOx emissions; predictive model; diesel engine; control-oriented; real-time in-cylinder pressure; NOx emissions; predictive model; diesel engine; control-oriented; real-time
►▼ Show Figures 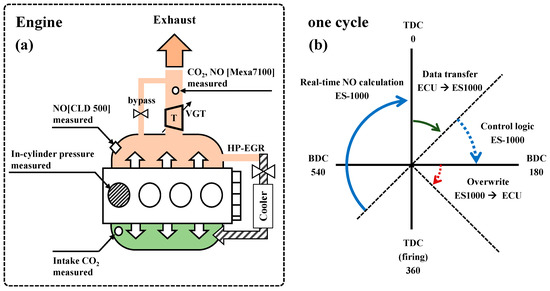