Flow Adjustment Inside and Around Large Finite-Size Wind Farms

This paper presents evidence of the disruption of a transition from fossil fuels to nuclear power, and finds the benefits forgone as a consequence are substantial. Learning rates are presented for nuclear power in seven countries, comprising 58% of all power reactors ever built globally. Learning rates and deployment rates changed in the late-1960s and 1970s from rapidly falling costs and accelerating deployment to rapidly rising costs and stalled deployment. Historical nuclear global capacity, electricity generation and overnight construction costs are compared with the counterfactual that pre-disruption learning and deployment rates had continued to 2015. Had the early rates continued, nuclear power could now be around 10% of its current cost. The additional nuclear power could have substituted for 69,000–186,000 TWh of coal and gas generation, thereby avoiding up to 9.5 million deaths and 174 Gt CO2 emissions. In 2015 alone, nuclear power could have replaced up to 100% of coal-generated and 76% of gas-generated electricity, thereby avoiding up to 540,000 deaths and 11 Gt CO2. Rapid progress was achieved in the past and could be again, with appropriate policies. Research is needed to identify impediments to progress, and policy is needed to remove them.
Keywords: nuclear power; construction cost; learning rate; energy transition; disruption; benefits forgone; deaths; CO2 emissions nuclear power; construction cost; learning rate; energy transition; disruption; benefits forgone; deaths; CO2 emissions

This section explains the methods and assumptions used to:
Counterfactual analyses require simplifying yet tenable assumptions. As Kharecha and Hansen [17] explain for their counterfactual analysis of deaths and CO2 avoided by historical nuclear power deployment, “There are of course numerous complications involved in trying to design such a replacement scenario (e.g., evolving technological and socioeconomic conditions), and the … energy mix cannot be known with total accuracy and realism; thus, simplifying yet tenable assumptions are necessary and justified.” This study assumes, conservatively, that the historical electricity demand did not change (despite the reducing costs) and assumes that the additional electricity generated by nuclear power would have displaced equivalent coal and gas generation.
Costs are in 2010 US dollars as per Lovering et al. [14].

OCC in 2015 was calculated for the three deployment rate scenarios by applying the pre-reversal learning rates to the 2015 actual capacity and to the two projections, i.e., by substituting the actual and projected capacity in 2015 in the trendline equations (shown in Figure 2 for each country).
The projected OCC in 2015 were compared with the actuals. IEA [20] published estimates (in 2013 USD) of actual OCC for nuclear power (as well as other technologies) for US, France, Japan and Korea. Here, these were adjusted to 2010 USD for consistency with Lovering et al. using the World Bank GDP deflator [21]. IEA [20] includes OCC for twenty two countries, but not for Canada, Germany and India, so $4000 was assumed for Canada, $5000 for Germany, and $2000 for India. These figures are close to OCC for US, France and Korea respectively, and are approximately consistent with the OCC of the last construction starts for those countries (Figure 2).

The number of deaths and the quantity of CO2 emissions that could have been avoided with the Linear and Accelerating scenarios were estimated. The extra nuclear electricity generated was estimated by factoring up the historical global annual nuclear net generation [22] in proportion to projected capacity divided by actual capacity [19]. (See Appendix A.)
To calculate the deaths and CO2 emissions that could have been avoided, it was assumed the extra electricity generated by nuclear substituted for coal generation in the Linear scenario and for coal and gas generation in the Accelerating scenario, with conversion factors [VII]:
This study conservatively adopts the historical demand profile (despite the declining cost). Appendix A explains the calculations and data sources.

Figure 2 has a chart for each of the seven countries and one for all seven combined; trendlines were fitted to the data points before and after the trend reversal points. The equation for each trendline is shown on the charts. 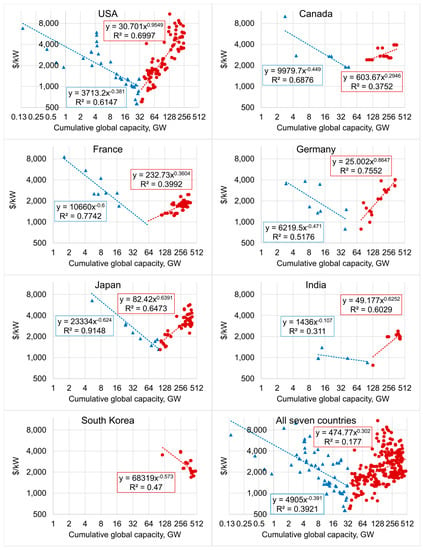 To compare trends for the seven countries, Figure 3 shows all the regression lines. Japan and France had the fastest pre-reversal learning rate; South Korea had a similar rate since it started building reactors in 1972, although it started from a high OCC after the reversal and initial rapid cost escalation in the other countries.
Table 1 lists the learning rates for both periods in each country for both the cumulative global and the cumulative country capacity. The sixth and seventh columns are the selected reversal point (cumulative global capacity of construction starts, and approximate year it occurred) for each country. The last column is the projected OCC at 497 GW cumulative global capacity if the pre-reversal learning rates had continued.
Learning rates are affected by the growth of cumulative capacity both globally and locally. Following Lovering et al., cumulative global capacity was used as the reference. Figure 4 plots the learning rates against the time span of the construction starts for each period in each country.
Table 1 and Figure 4 show that, before the reversal, OCC learning rates were 23% in the US, 27% to 35% in the other countries except India (where it was 7%), and 24% for all countries combined. At the reversal, learning rates changed abruptly and became negative (−94% in the US, −82% in Germany, −23 to −56% in the other countries, except in South Korea, and −23% for all seven countries); South Korea started building nuclear power plants after the initial rapid cost-escalation period, achieving a 33% learning rate since 1972. The fact that fast learning rates existed up to about 1970, and in South Korea since, suggests they could be achieved again [IX].
The US’s post-reversal learning rate was the worst of the seven countries. The reversal occurred one to five years later in the other countries and the real cost increase was not as severe as in the US. This suggests the US may have negatively influenced the development of nuclear power in all seven countries (and probably all countries). It also shows that technology learning and transition rates can change quickly and disrupt progress, in this case delaying progress for about half a century so far.

Table 3 lists the projected OCC in 2015 and the percentage reduction from the actual OCC [20] for the six countries that were constructing reactors before the learning rate reversals. Actual OCC for Canada, Germany and India are approximate, as noted in Section 2.3.
If the pre-reversal learning rates had continued, with the Actual deployment unchanged, until 2015 when cumulative global capacity of construction starts was 497 GW, the OCC of nuclear power would be 5 to 15% of what it was in 2015 (except in India); for example, the OCC would be $349/kW in the US, $257/kW in France, and $484/kW in Japan (Table 3). These are much lower than the OCC of fossil fuel and other alternative electricity generation technologies [20].
If the pre-reversal learning rates and the Linear and Accelerating deployment rates had continued, the OCC would be approximately 2% to 10% of what it was in 2015 (except in India where it would be 31 to 33%) (Table 3).
These are striking cost reductions that, to be achieved, would have required pre-reversal learning rates and deployment rates to continue. If the rapid learning and deployment rates that prevailed pre-reversal could be achieved again, nuclear power would become much cheaper than fossil fuel technologies in the future. Some may regard this as too optimistic. However, there is no apparent physical or technical reason why they could not have continued and cannot prevail again. They have prevailed in South Korea over the past 40 years (Figure 4), and there are examples in other complex technologies and industries of cost reductions at similar rates that persisted over the past 50 years at the same time as the OCC of nuclear power was increasing rapidly [XII].

If the pre-reversal learning rates had continued, OCC, and consequently the cost of electricity, would undoubtedly have declined. Arguably this would have led to other benefits not estimated in this analysis, such as increased productivity, faster economic growth, improved standard of living, and better health and education outcomes.
The declining cost of electricity would probably have caused increasing demand and consumption. Substitution of electricity for fossil fuels for heat and transport may have proceeded faster. With declining costs and increasing demand, electricity grids may have expanded faster with more people being connected. Alstone et al. [11] charts the world population and the number of people who were connected to an electricity grid for the period 1830 to 2013. If grid connections had continued to accelerate at the rate that prevailed between 1950 and 1975, many of the 1.2 billion people who were not grid-connected in 2015 could have been.
With increased consumption, electricity could have substituted for some combustion of fuels by the 3 billion people who cook and heat their homes using open fires and simple stoves burning wood, animal dung, crop waste and coal, thereby reducing the 4.3 million deaths per year attributable to indoor air pollution [7]. And clean water and sanitation systems could have been provided to more people, reducing deaths from contaminated water [6].
The benefits forgone may have been substantially greater than estimated in the present counterfactual analyses. World energy consumption slowed in the 1970s [3] and GDP growth rate slowed too [25]. If the transition from fossil fuels to nuclear power had not been disrupted, world GDP growth may not have slowed as much. The global economy could have been significantly different from what it is now.

Policies that increase the real cost of energy would be damaging economically, and are unlikely to be politically sustainable and, therefore, unlikely to succeed in the long term. To reduce the emissions that are detrimental to health and the environment, countries will need access to low-emissions technologies that are cheaper than high-emissions technologies. In this case, carbon pricing and command-and-control policies, such as incentives for low emissions and penalties for high emissions technologies, would not be required.
Cheap electricity increases productivity and economic growth, drives faster electrification for the people without access to electricity or with insufficient and/or unreliable electricity, and thus more quickly lifts the world’s population to higher living standards. As electricity costs decrease, the deployment rate increases and capacity doublings occur faster. Consequently, costs reduce faster; i.e., we progress more quickly down the learning curve [XV] [26]. Technology transition takes place faster and the benefits are delivered sooner.
These benefits could be achieved in the future if the impediments that disrupted the transition to nuclear power are removed. While this paper does not attempt to discuss the causes of the disruption and cost escalations thereafter, many others have (e.g., Cohen [15], Grubler [16], and Lovering et al. [14] cites a number of studies). A likely root-cause of many of the causes discussed in the literature was the growing concern about the safety of nuclear power, fanned by the anti-nuclear protest movement, which began in the mid-1960s (Daubert and Moran [27]; Wyatt [28]), and the ongoing political, legislative and regulatory responses to the concerns.
The fact that rapid learning and deployment rates prevailed in the past suggests they could be achieved again. To achieve them, it is suggested four steps are needed:
The benefits forgone cannot be recovered, but future benefits can be increased by amending the policies that caused the cost increases and slowed the deployment of nuclear power. Human wellbeing could improve faster if the impediments that are slowing the development and deployment of nuclear power are removed. 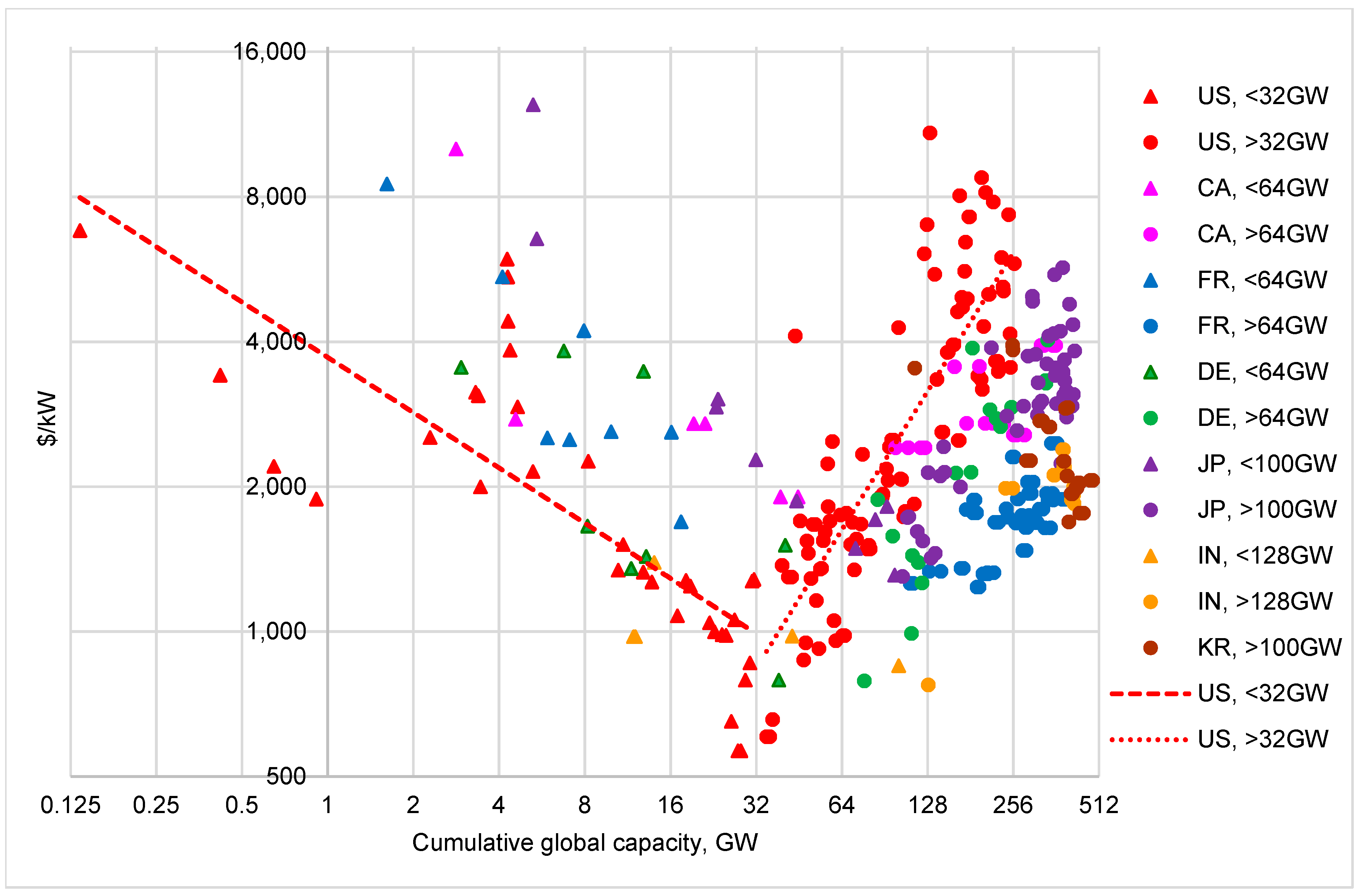 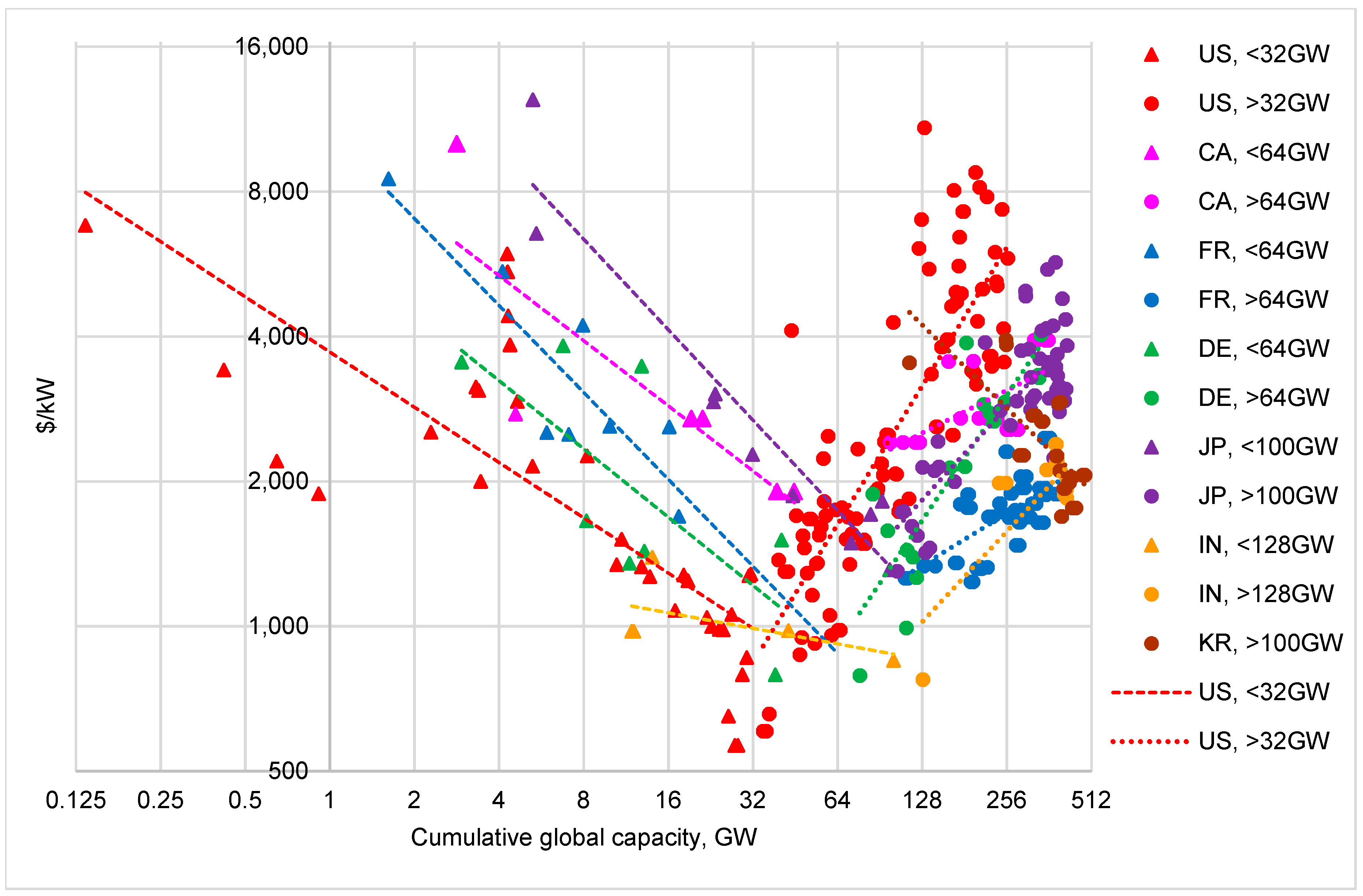 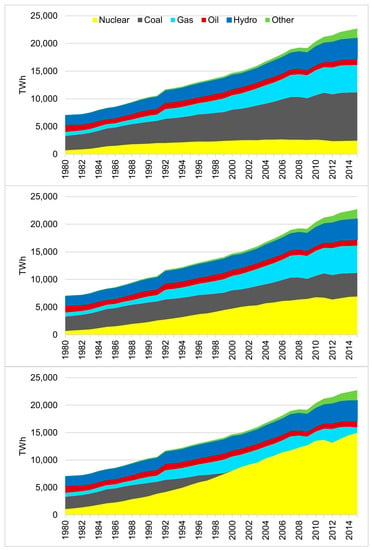