The offshore platforms provide the basic support for marine operation, such as the oil exploration, drilling operations and transportation. A considerable amount of theoretical and experimental research effort has been aimed at improving the control performance of offshore platforms, including passive and active control [1,2]. Passive control is the classic technology to enhance the safety by using excessive construction materials to guarantee the stability of the offshore structures. Nevertheless, passive systems have limitations in improving control performance, even with the huge energy cost. In comparison, active control technologies have great potential to meet the optimal performance requirements with low consumption requirement [3]. Recently, various kinds of active schemes have been derived and employed for offshore platforms, e.g., using the concepts of non-fragile control [4], sliding mode theory [5] and control [6].
With the development of advanced sensor, actuator and digital control technology, offshore platforms under digital control system have been attracting extensive attention in the field of controller design [7,8]. Offshore platforms generally involve sophistication of the superstructure in the deep water, in which various inevitable factors directly affect offshore platforms in ocean environment, especially vibration caused by external wave force [9]. In order to describe and identify the characteristic of wave force, various idealized spectra are employed to describe the empirical relationship that defines the distribution of energy with frequency within the ocean [10], such as the Pierson–Moskowitz spectrum [11] and Joint North Sea Wave Project (JONSWAP) spectrum [12]. Compared to the Pierson–Moskowitz spectrum, the JONSWAP spectrum is effectively a fetch-limited version to analyze the wave force in the wave-frequency domain [13]. Many control schemes were proposed to attenuate the wave-induced vibration thereby ensuring the safety and satisfying the performance requirements. For example, the wave vibration problem was formulated as an optimal tracking control problem and a corresponding tracking control scheme was proposed to reduce the displacement and velocity of offshore platform in [14]; a network-based state feedback control scheme was designed for steel offshore platform based on the stability criterion in [15] with small control consumption; a non-fragile sampled-data controller was proposed in [4], thereby reducing the oscillation amplitudes of the offshore platform; an event-triggered controller was derived from the Lyapunov–Krasovskii function approach to guarantee the stability of offshore structure in [16]. It should be noted that the aforementioned works are with huge energy consumption. Meanwhile, the optimal vibration control theories provide efficient methods to improve the control performance of control systems with smaller control consumption. Therefore, one target of this paper is to apply the optimal control technology to the offshore platform under digital control system.
In general, offshore platforms have their inevitable nonlinear characteristics caused by rigid structure, multiplying springs and dampers, flexibility and complexity structures. Unfortunately, the unsafely behaviors and destabilization of offshore platforms mainly result from nonlinear dynamics. Many researchers have engaged in the efforts to the implementation of control schemes for nonlinear offshore platforms, e.g., a robust mixed control method for wave-excited offshore jacket platforms is proposed in [17] to minimize the upper bound of the performance measure on platform dynamics satisfying some norm bound constraint simultaneously; a novel sliding mode control scheme is proposed by using information about mixed current and delayed states in [18]; by combining a sliding mode control technique, the adaptive control algorithm and wavelet support vector machine, an adaptive integral sliding mode control to handle the nonlinear behavior of the offshore platform in [19]. Meanwhile, the optimal vibration control theories provide efficient methods to improve the control performance of control systems with smaller control consumption [20,21,22,23]. However, optimal control for a nonlinear discrete system will lead to a Hamilton–Jacobi–Bellman (HJB) equation with no exact analytical solution except [24]. In order to obtaining approximate solutions to the HJB equation, many approaches have been developed, such as the power series approximation [25], the successive Galerkin approach [26], and approximating sequence of Riccati equations approach [27]. However, it still is difficult to seek the solution under the external disturbance and nonlinear dynamics. This is the motivation of this paper.
The irregular wave disturbance attenuation problem for a nonlinear offshore platform under digital control system is investigated in this paper. An approximation of optimal wave disturbances attenuation controller (AOWDAC) is proposed to compensate the external irregular wave force and nonlinear dynamics. First, the discrete nonlinear jacket-type offshore platform is established under a digital control system, in which the external wave force acting on the offshore platform is viewed as the output of an external system. In order to minimize the average quadratic performance index and energy consumption, AOWDAC is developed to obtain the approximation solution of a derived nonlinear two-point-boundary-value (TPBV) problem caused from the nonlinear offshore structure, which is made up of disturbance compensation of wave force, feedback items of offshore platforms and the vector sequences of nonlinear compensation. Based on the value of performance index in the process of iteration, the feasibility of AOWDAC is realized. By analyzing the displacement and velocity of a jacket-type offshore platform located in Bohai Bay, the effectiveness of developed AOWDAC is proved compared with an optimal feedback and feedfoward vibration controller (OFFVC).
The rest of this paper is as follows. The irregular wave attenuation problem for a nonlinear offshore platform under a digital control system is formulated in Section 2. The main results are shown in Section 3, in which the AOWDAC is designed to compensate the irregular wave force and nonlinear dynamics, and the feasibility of AOWDAC is realized by using the designed iterative algorithm. In Section 4, a jacket-type platform located in Bohai Bay is introduced to prove the effective of the designed AOWDAC and algorithm. Concluding remarks are drawn in Section 5.

In this section, the model of a jacket-type offshore platform under a digital control system is introduced first, and the wave force derives from the output of an external system. Then, the optimal wave disturbances attenuation problem is formulated with respect to a quadratic performance index.

The simple structure of jacket-type offshore platform with an active mass damper (AMD) device is shown in Figure 1 [28]. The global dynamic equation of a jacket-type offshore platform is given by the following coupled equations: where , and denote the modal mass, frequency, and damping ratio of jacket-type platform, respectively; , and are the mass, frequency, and damping ratio of the AMD; and represent the irregular wave force and control force. is the corresponding modal coordinate that refers to the deck motion of a jacket-type offshore structure; is the displacement of the AMD.
By defining , the state-space model of the jacket platform can be described as where
Defining the sampling period as T, the discrete-time model of jacket platform (2) under a digital control system can be described as where , and .

Based on the linear wave theory and the JONSWAP wave spectrum, the acceleration and horizontal velocity of the ocean water particle can be described as where z is the vertical coordinate axis, d denotes the ocean depth, n is the wave number, and denotes the wave elevation. Then, the wave force acting on the column of jacket-type platform can be described as where is the irregular wave condition, and , in which is the density of ocean fluid, is the characteristic diameter of the jacket-type platform legs, and are the drag and inertia parameters, respectively.
The total wave force acting on the jacket-type offshore platform can be calculated from
Letting and , we have where denotes random phase angles in the range of .
Introducing and noting , the following external system can be designed to describe the wave force , which is described as
Under the sampling period T, the discrete-time form of wave force (9) under digital control system can be described as where . All of the eigenvalues of G satisfy It is assumed that is completely observable.

Due to the wave force and nonlinear item , the system state and controller cannot converge to zero jointly. Therefore, the classic quadratic performance index is not applied to this wave disturbance attenuation problem. Then, the following average quadratic performance index is chosen as where is a positive semi-definite matrix and is a constant.
Therefore, the optimal irregular wave disturbances attenuation problem can be formulated as designing the digital-control-based AOWDAC for a nonlinear offshore platform (2) and wave forces (9) so that the average quadratic performance index (12) can be obtained the minimum value.
In order to design the digital-control-based AOWDAC, we introduce the following lemmas.
Lemma 1.
Let , and . The matrix equationhas a unique solution X if and only ifwhere denotes eigenvalues of matrix [28].
Lemma 2.
The discrete nonlinear system is expressed aswhere is the system state, denotes the initial state vale, and satisfies the Lipschitz condition. The following sequence converges to the solution of discrete system (15), which is described aswhere , I is the unit matrix [27].

Theorem 1.
Considering the wave disturbance attenuation problem for a discrete jacket-type platform (4) and wave force (10) with respective to the average quadratic performance index (12), the digital-control-based AOWDAC can be designed aswhere the item with denotes the feedback component; the item with is the feedforward component; the item with denotes the nonlinear compensation; denotes a Jacobian matrix of with respect to ; is the unique positive-semi-definite solution of the following Riccati matrix equationwith ; is the unique solution of the following Stein matrix equation
The sequence of can be calculated fromwhere the sequence of in (20) can be obtained from
Proof of Theorem 1.
Applying the optimal control theory to the following Hamilton function
Then, we have the following TPBV problem with nonlinear items
Meanwhile, the optimal control law can be described as
In order to solve the above TPBV problem, is designed as
Then, one gets
Substituting the second formula of (26) into (24), the optimal control law can be rewritten as
Rearranging the second formula of (26), we have
Noting the parameters of (25) and (28), we can obtain the Riccati Equation (18) and Stein Equation (19). Because the pair is controllable, it can be claimed that is the unique positive-semi-definite solution of (28). Noting (11) and the first formula (26), we have that all of the eigenvalues of satisfy . Therefore, is the unique solution of the Stein matrix (19).
Meanwhile, the following TPBV problem can be derived from the first formula of (26) and (28):
Due to the nonlinear item , the analytical solution of (29) is difficult to be obtained. Based on Lemma 1, the vector sequences of and are introduced to solve the TPBV problem (29). From Lemma 1, one gets
Rearranging (20), (21) and (29), control sequence can be described as
Rearranging the above control sequence , one gets
From (32), the digital-control-based AOWDAC (17) can be formulated. The proof is completed. ☐

The unfeasibility of digital-control-based AOWDAC (17) results from the term of , and the iteration number must be limited. Therefore, this subsection will design a numerical algorithm to decide the iteration number based on the performance index in each iteration.
Based on (17), the feasible controller is designed as where M is determined from the following algorithm.
Step 1: Obtaining and from (18) and (19), defining , the sequences and , and giving a small positive real constant ;
Step 2: Setting , and obtaining from the third formula of (20);
Step 3: Calculating from (33) and the state sequence from the second formula of (21);
Step 4: Calculating the performance index in the Mth iteration from
Step 5: If , then stop and obtain the controller , else go to Step 6;
Step 6: Let , return to Step 2.

In this section, the parameters of offshore platform in Bohai Bay are given first. Then, the wave disturbance attenuation abilities of proposed digital-control-based AOWDAC are analyzed.

Taking the jacket-type offshore platform located in Bohai Bay into consideration, the parameters of installed AMD and offshore structure are listed in Table 1 [28].
Then, the matrices in (4) can be obtained under sampling period T = 0.1 s as follows:
Meanwhile, the parameters of irregular wave force are given in Table 2. Then, the irregular wave force acting on the jacket-type offshore platform (35) can be calculated from (10) and displayed in Figure 2. The weight matrices in performance index (12) are chosen as , and . 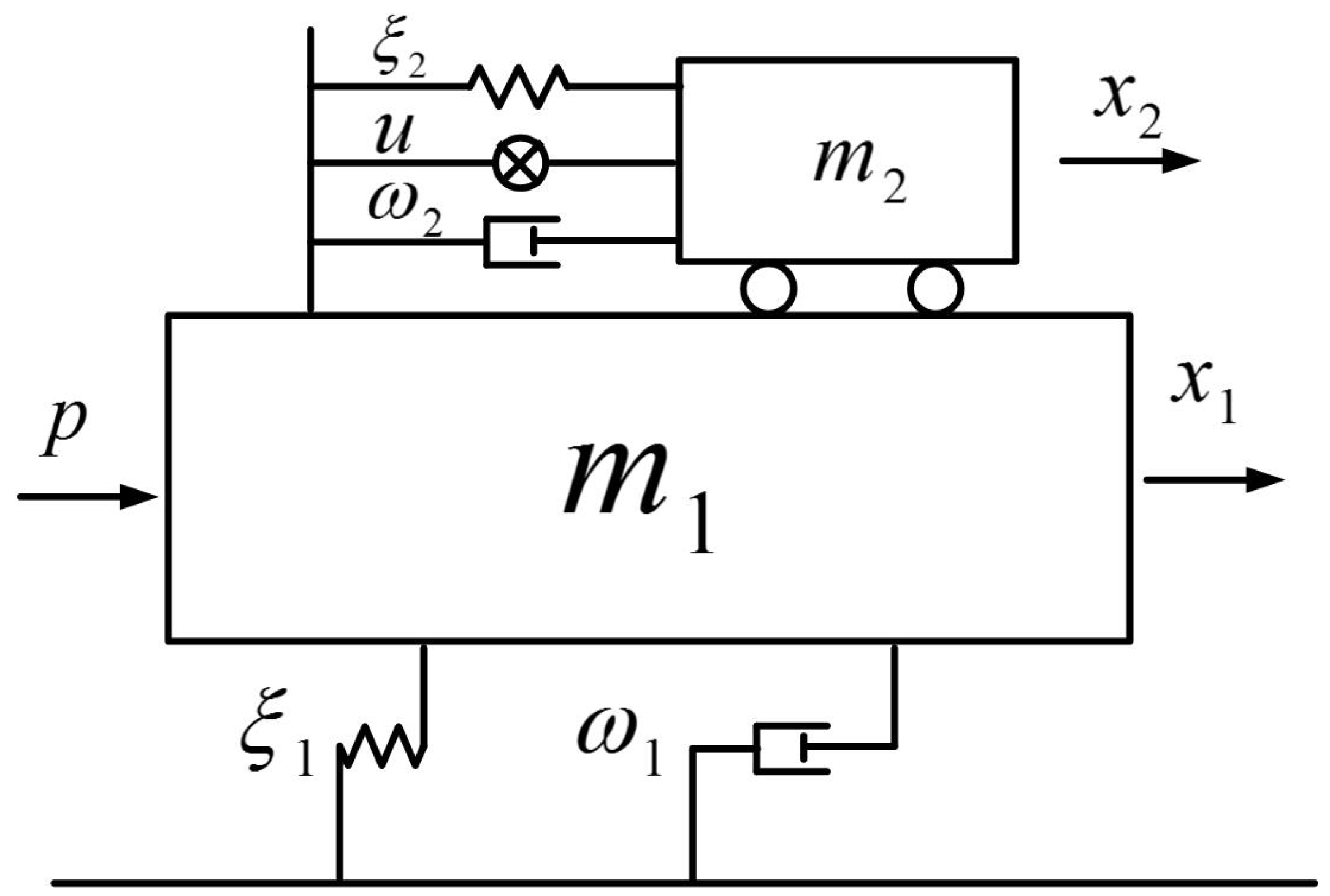 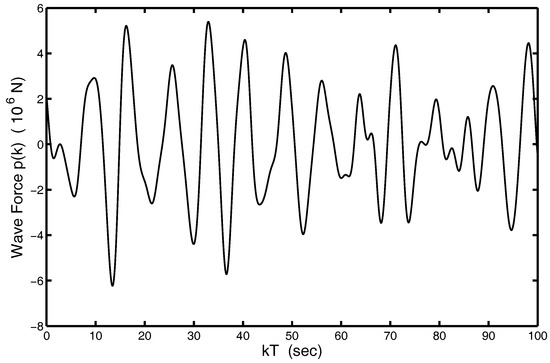 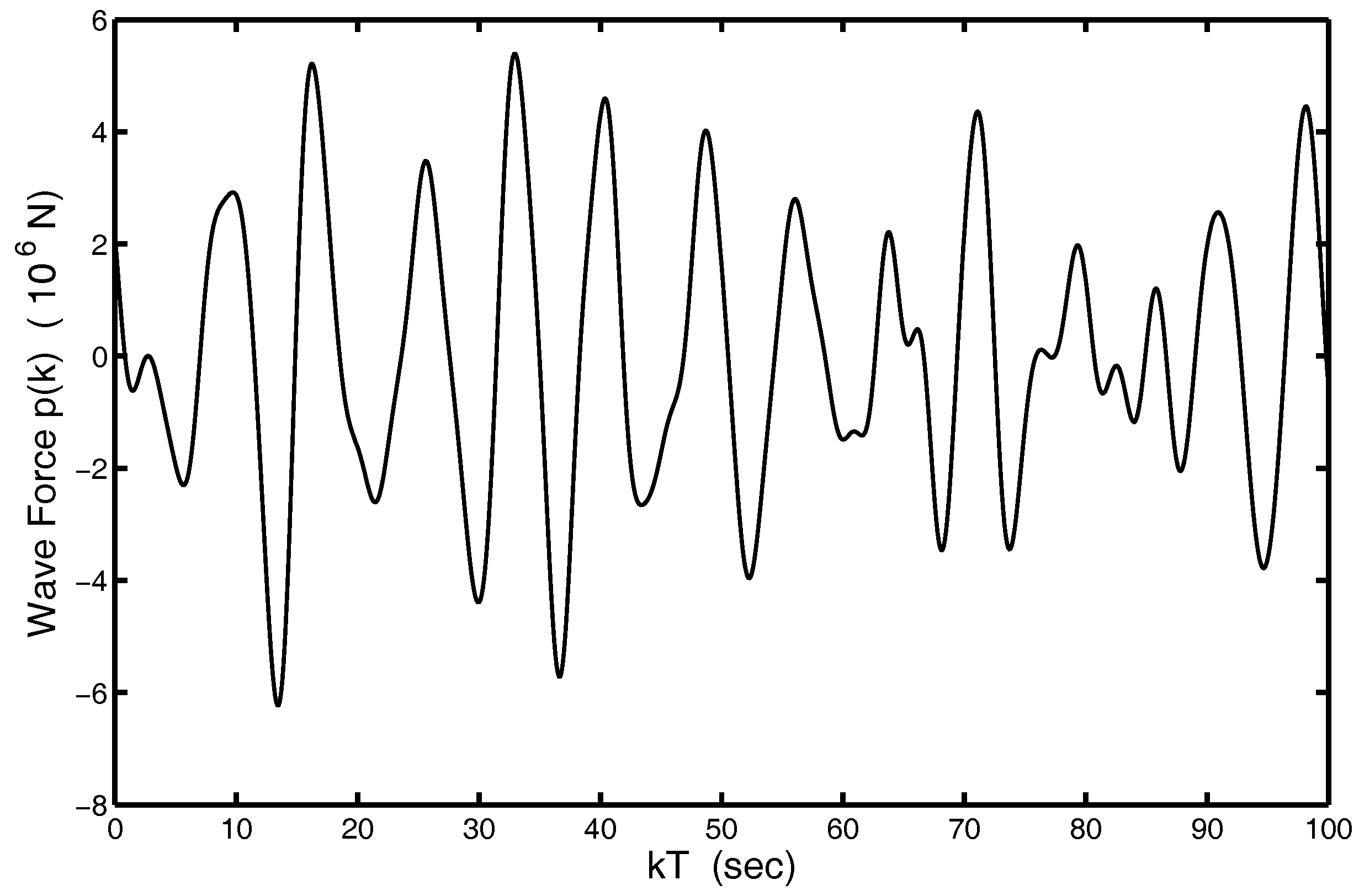