Multi-Objective Analysis of a CHP Plant Integrated Microgrid in Pakistan

:
In developing countries like Pakistan, the capacity shortage (CS) of electricity is a critical problem. The frequent natural gas (NG) outages compel consumers to use electricity to fulfill the thermal loads, which ends up as an increase in electrical load. In this scenario, the authors have proposed the concept of a combined heat & power (CHP) plant to be a better option for supplying both electrical and thermal loads simultaneously. A CHP plant-based microgrid comprising a PV array, diesel generators and batteries (operating in grid-connected as well as islanded modes) has been simulated using the HOMER Pro software. Different configurations of distributed generators (DGs) with/without batteries have been evaluated considering multiple objectives. The multiple objectives include the minimization of the total net present cost (TNPC), cost of generated energy (COE) and the annual greenhouse gas (GHG) emissions, as well as the maximization of annual waste heat recovery (WHR) of thermal units and annual grid sales (GS). These objectives are subject to the constraints of power balance, battery operation within state of charge (SOC) limits, generator operation within capacity limits and zero capacity shortage. The simulations have been performed on six cities including Islamabad, Lahore, Karachi, Peshawar, Quetta and Gilgit. The simulation results have been analyzed to find the most optimal city for the CHP plant integrated microgrid.
Keywords:
combined heat and power plant (CHP); microgrid; multi-objective analysis; waste heat recovery (WHR); HOMER Pro

The same NASA database is utilized for the 22-year (July 1983–June 2005) average monthly temperature of earth’ surface for the above-mentioned cities, as shown in Figure 5. Karachi has greater average temperature for eight months (January–April, September-December), while Lahore has its peak for four months (May–August). On the other hand, Gilgit has the lowest peak during the entire year.

A microgrid introduces the concept of operating the generating sources close to the loads. The generating sources could be thermal or renewable sources, supported by energy storage. This model enhances the efficiency, reliability and cost-effectiveness of the system, which cannot be achieved with a single generating source [25]. In this paper, the microgrid model composes of DGs including PV/diesel generators with/without batteries in both grid-connected as well as isolated modes, with and without considering the effect of WHR. In the context of a grid-connected system, the grid connection is utilized to sale the excess electricity of the microgrid in case of capacity shortage.
In total seventeen different configurations have been analyzed. The conventional diesel generators only system, as shown in Figure 6, has been considered as a first configuration. Among the remaining sixteen configurations, eight are analyzed in isolated mode, as shown in Figure 7a–h and rest of the eight are analyzed in grid-connected mode, as shown in Figure 8a–h. In addition, among the remaining sixteen configurations, eight configurations have been simulated while considering the WHR effect, as shown in Figure 7c,d,g,h and Figure 8c,d,g,h. The PV is the only renewable energy resources used in study (because of the 2.9 million MW solar potential in Pakistan [35]), while batteries are used as the only storage device.
Table 1 and Table 2 [36], highlight different costs and technical details of the DGs with/without batteries. These parameters are the input data to HOMER Pro software. The GHG emissions penalty and CS penalty has been set at $20/ton and $20/kWh respectively [36], whereas Pakistan’s fuel price has been set at 0.75 $/L [37]. Table 3, highlights the sizes of the DGs with/without batteries taken under consideration.

HOMER is an optimization tool developed by the U.S. National Renewable Energy Laboratory (NREL). HOMER Pro is the latest version. HOMER models the physical behavior and the life-cycle cost of a power system [38,39]. In addition, HOMER allows the user to analyze different configurations of generating and storage units based on their technical and economic benefits. The user provides the resource data like average daily solar irradiance, load profile to be served, generating/storage units to be considered and their costs as input to the HOMER. The software then performs an hourly power balance calculation for each configuration for a year. After simulating all the possible configurations, the infeasible configurations are discarded and the feasible solutions are ranked according to the lowest total net present cost (TNPC).
HOMER uses an optimizer which is based on a derivative free optimization. The optimization algorithm uses a modified grid search algorithm. The user specifies different options (in the form of inputs) related to the generating/storage units in a searchable grid, while the algorithm searches for the optimal solution [40]. The HOMER initially takes input data in a table form, then it performs the simulations on the given data to find out all the possible configurations [40]. These configurations are then analyzed to shortlist the optimal configuration while considering the objectives. Figure 9 shows the flowchart for HOMER Pro.

The optimal configuration for the CHP plant integrated microgrid is based on multiple objectives. The multiple objectives include the minimization of the, total net present cost (TNPC) of microgrid, cost of generated energy (COE) and the annual greenhouse gas (GHG) emissions, and the maximization of the, annual waste heat recovery (WHR) of thermal units and annual grid sales (GS). These multiple objectives are subject to the constraints of power balance with 25% of operating reserve, battery operation within state of charge (SOC) limits, generation capacity limit and zero capacity shortage.
The TNPC of generating/storage unit is the present value of all the costs that it acquires during its lifespan minus the present value of all the revenues that it earns over its lifetime. Revenues include salvage value and grid sales [38]. The COE is calculated based on the total annualized cost and the total load supplied including the grid sales (GS). The GHG emissions include the pollutants like carbon dioxide (CO2), carbon monoxide (CO), unburned hydrocarbons (HC), Sulphur dioxide (SO2) and nitric oxides (NOx). All emissions are calculated by multiplying the fuel quantity with the emission coefficients [38]. In case of a CHP plant, the generator’s heat is recovered to supply the thermal load. Normally the generator’s fuel curve is used to estimate the electricity production for a given fuel. It is assumed that the remaining fuel energy will be converted to heat. Waste heat recovery (WHR) is the energy that can be recovered to supply thermal load [38]. Excess of energy that can be sold to the grid is accounted as grid sales (GS). This energy is the difference between total annual load and total annual generation [38].
The power balance with 25% of operating reserve is an equality constraint which not only supplies the load demand, but also ensures 25% additional reserves. Battery operation within SOC limits is an inequality constraint which is maintained to achieve a prolonged battery life. Generator operation within capacity limits is also an inequality constraint to maintain fuel efficiency. Zero capacity shortage is a constraint to ensure the uninterrupted supply of load.

Figure 11 shows the comparative analysis of COE for different DG configurations for the six cities. Gilgit has the lowest COE among all DG configurations. In grid-connected mode, double diesel generator (2Gen) and double PV (2PV) with WHR system costs about 0.049 $/kWh. 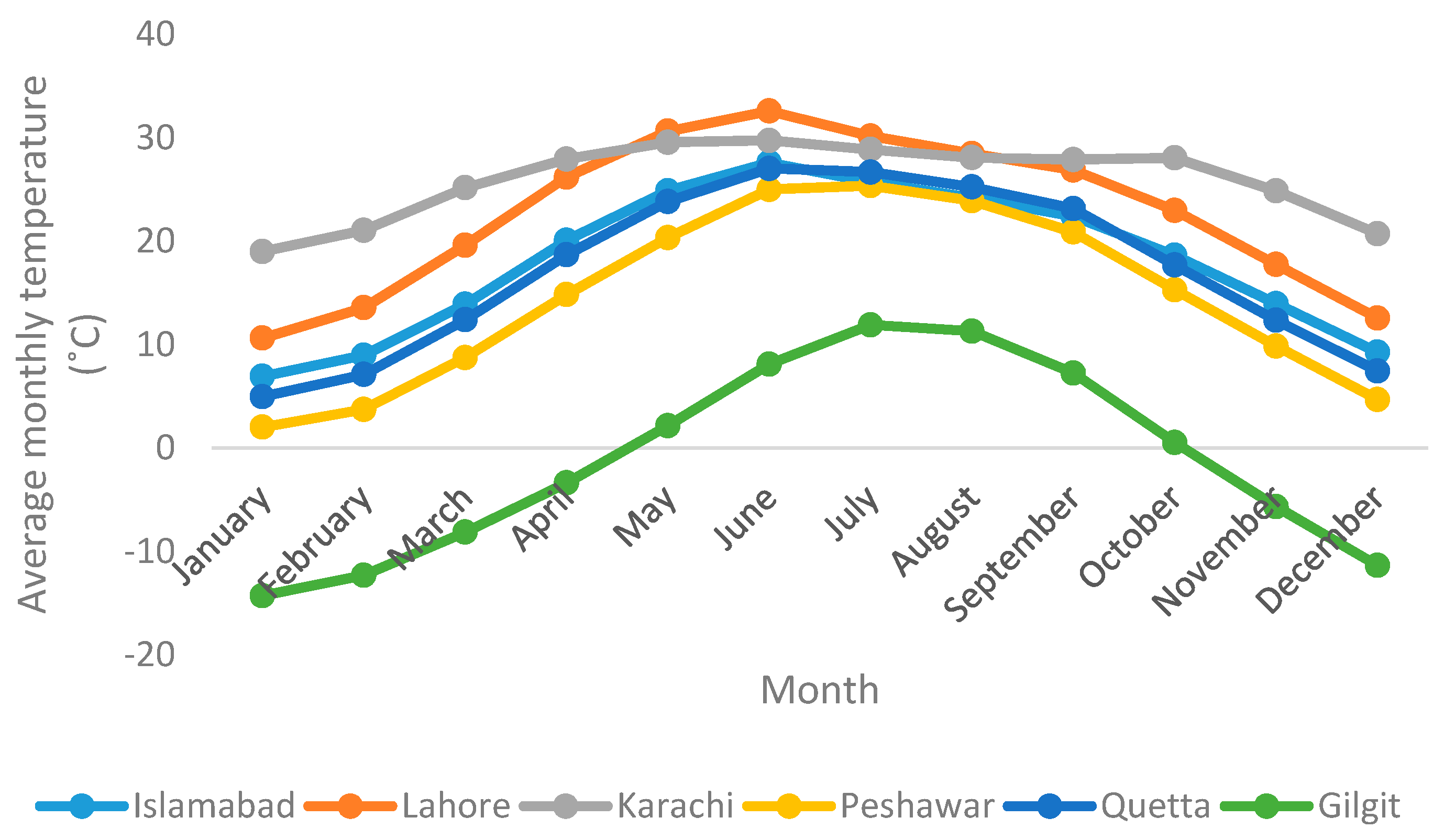 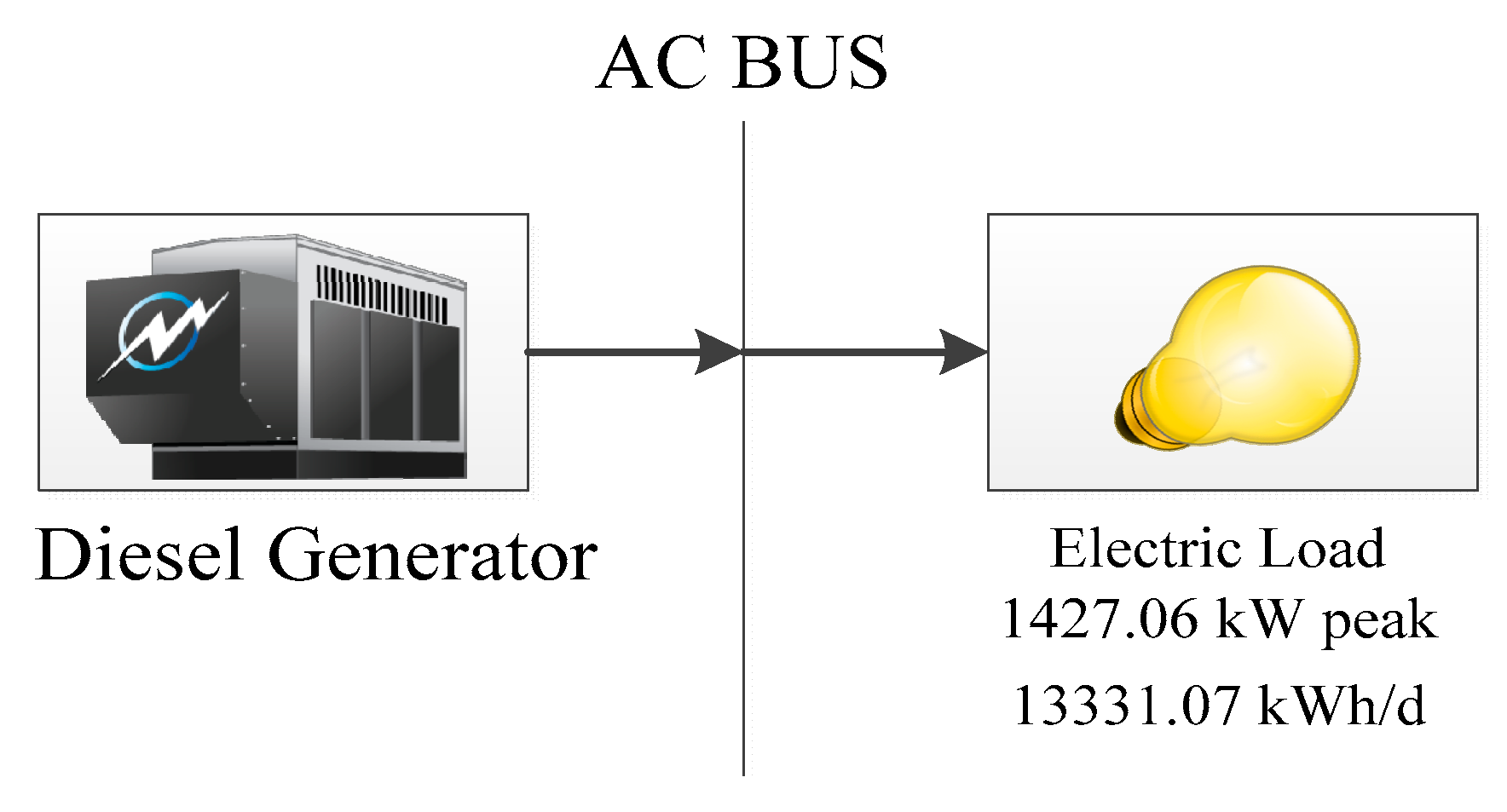 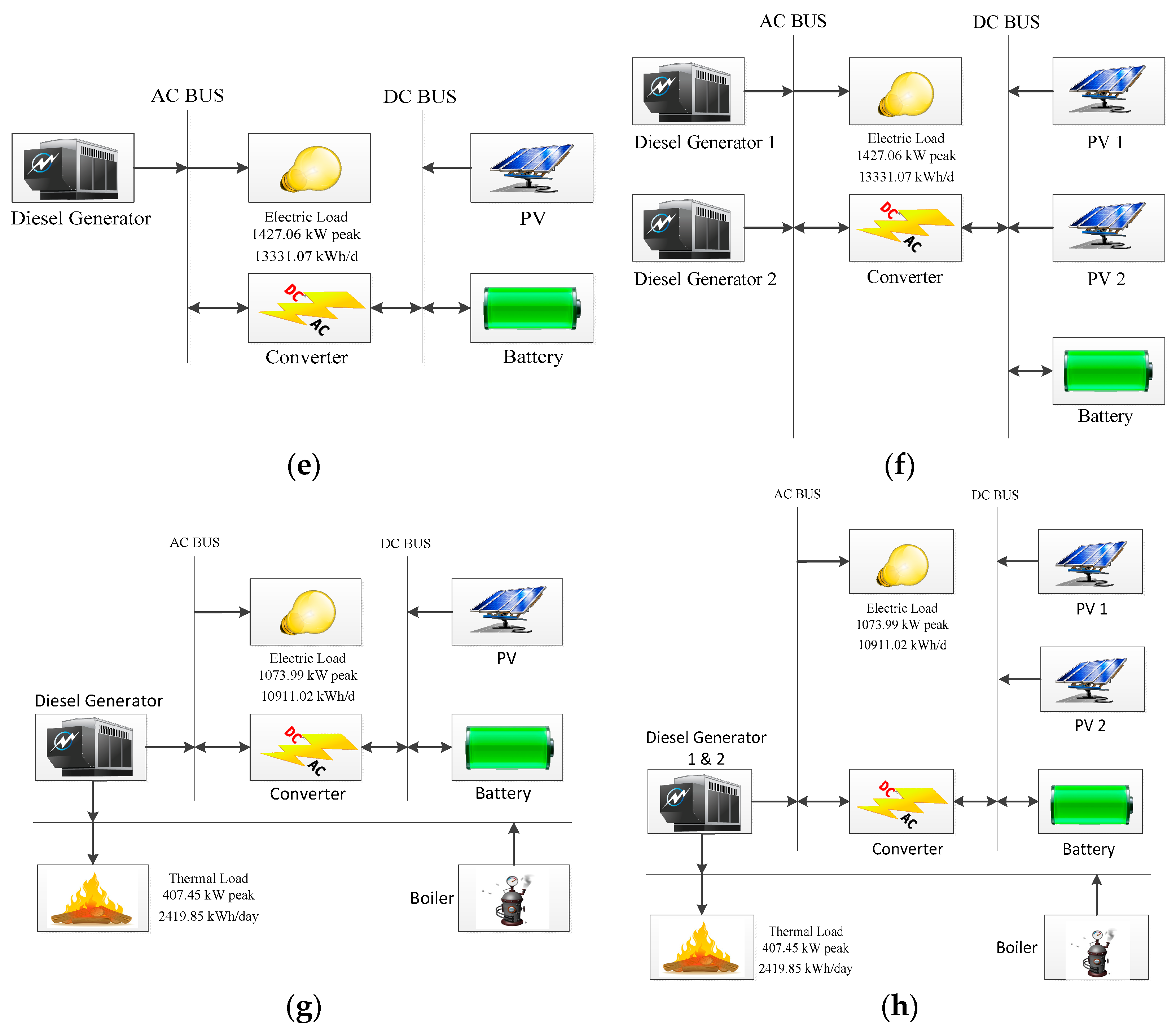 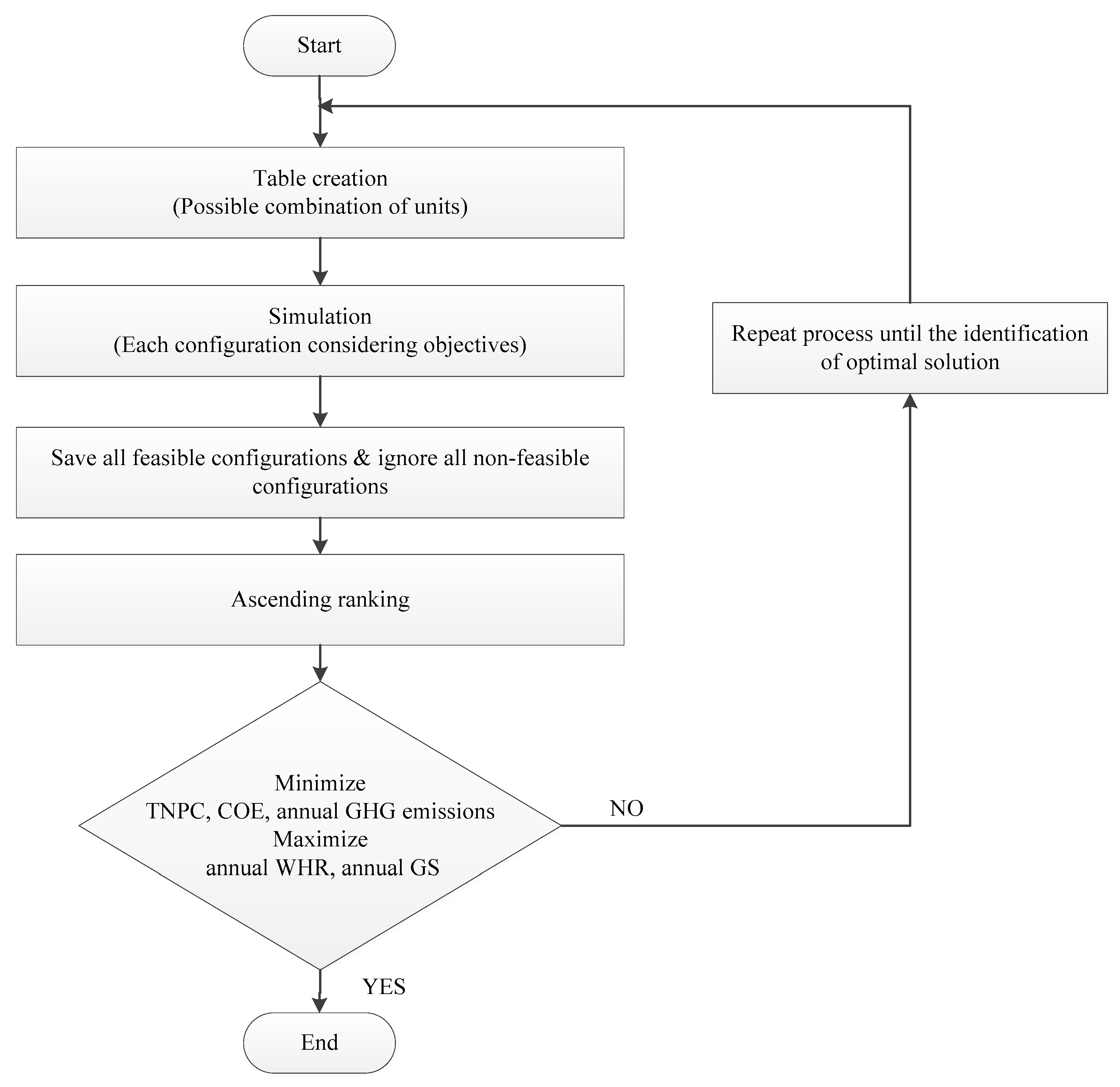 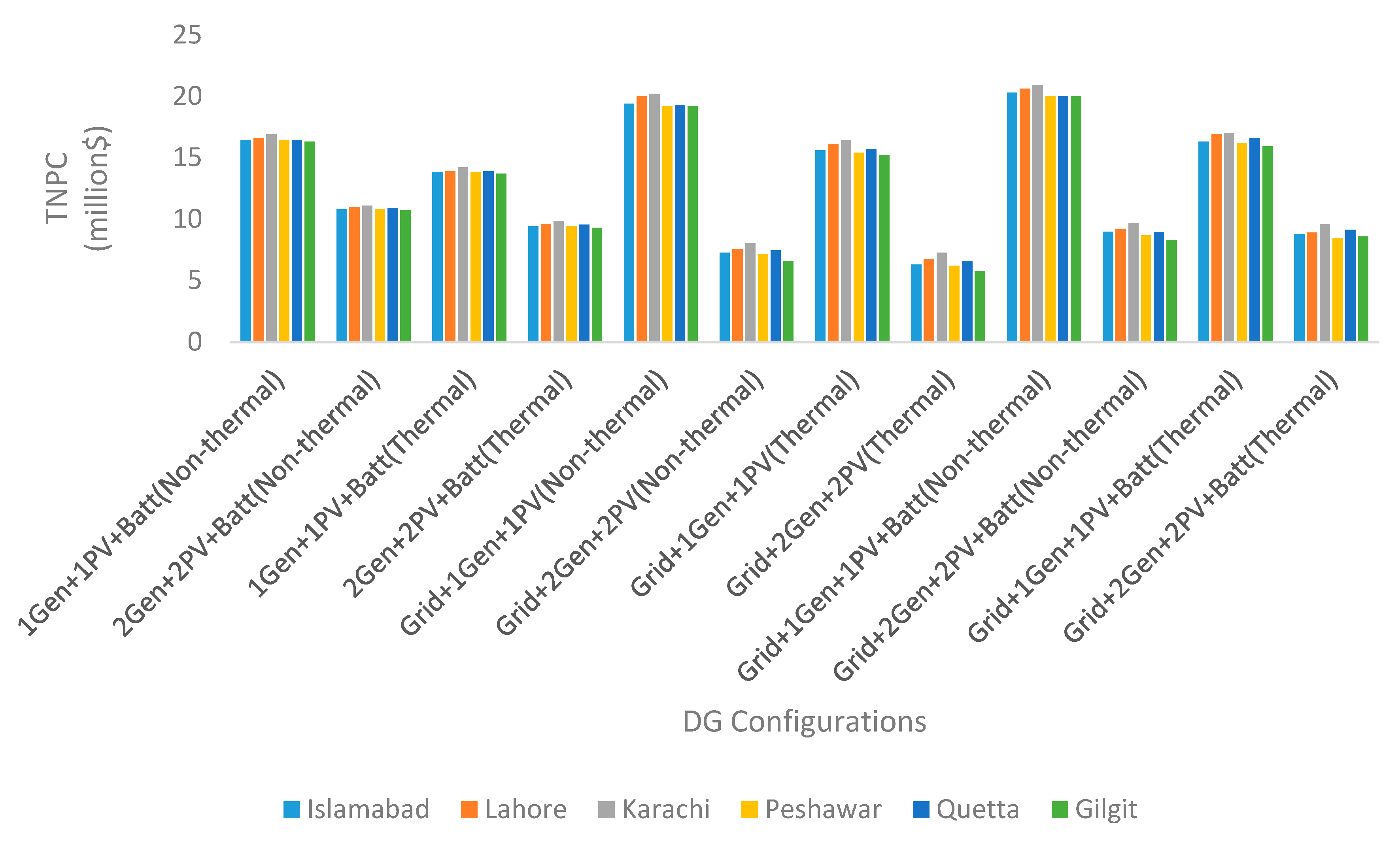 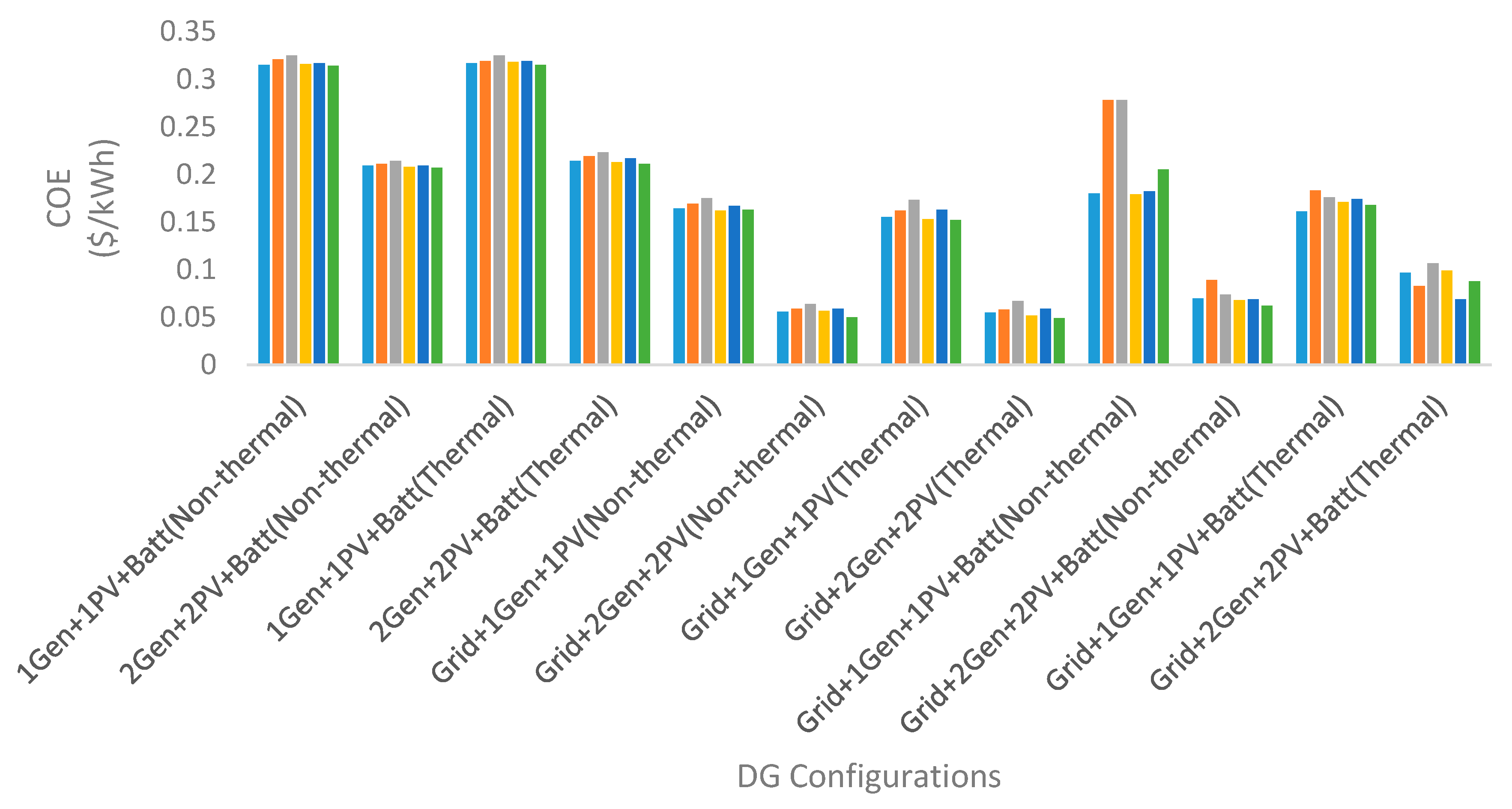 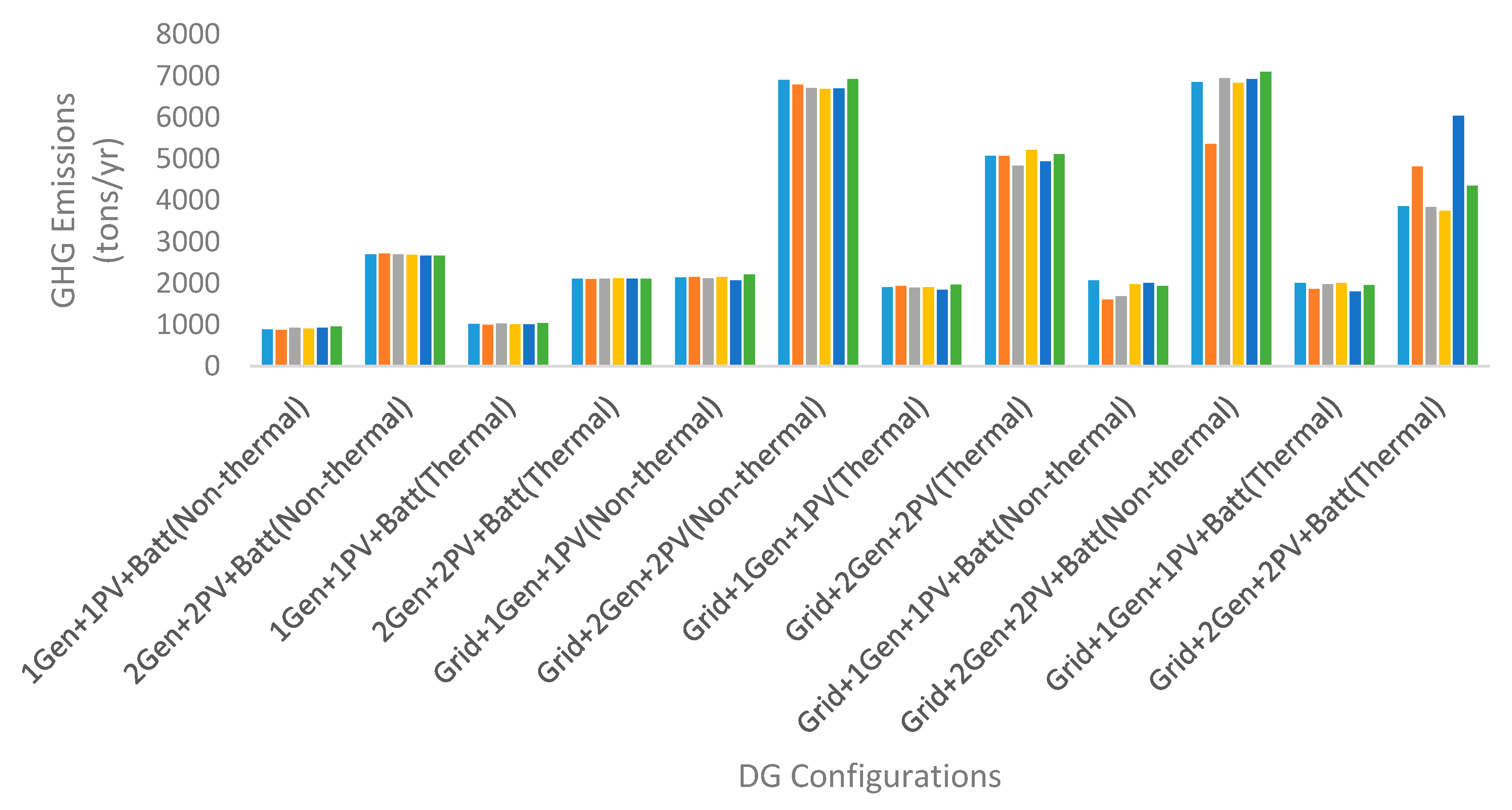 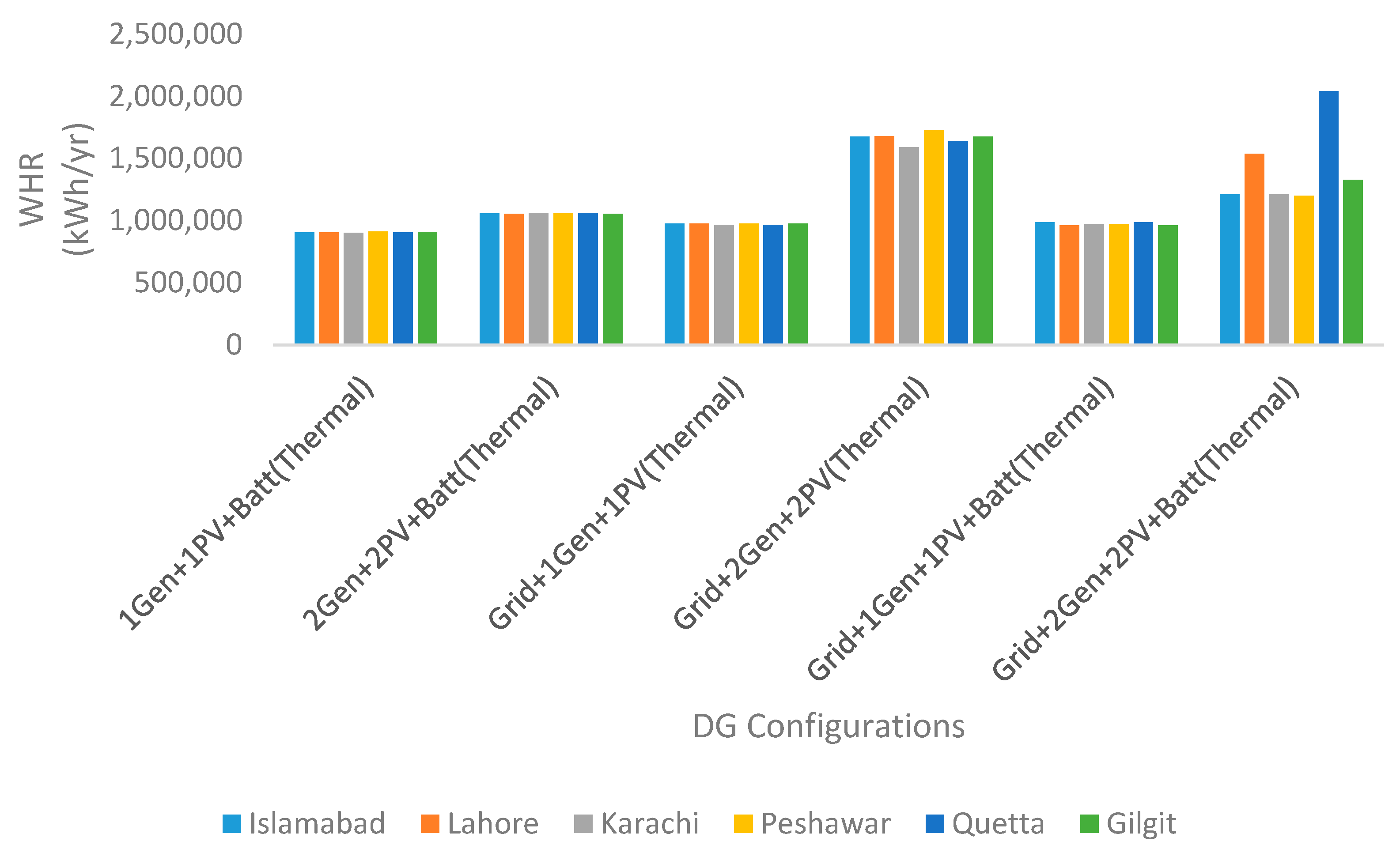 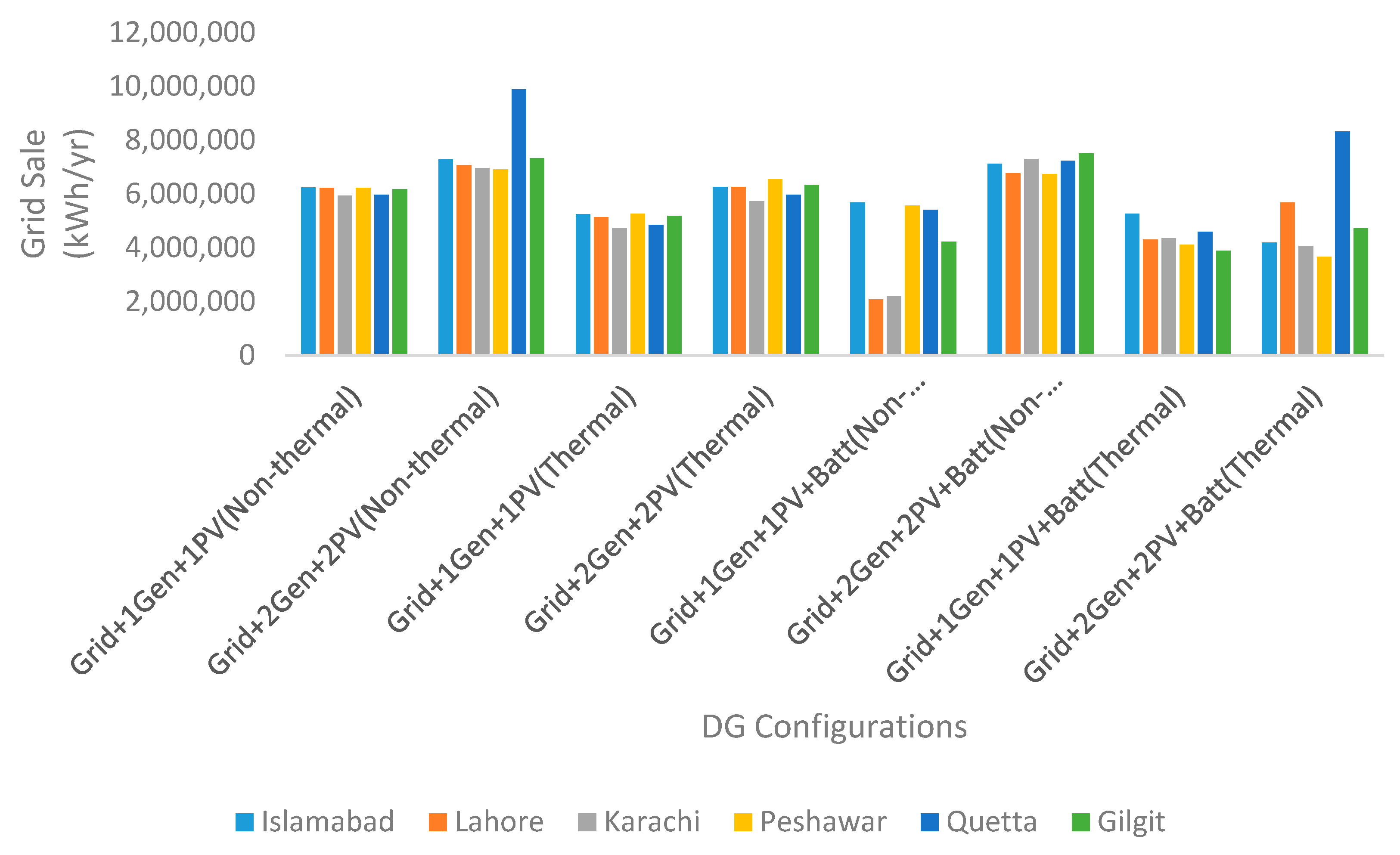