Output performance of a thermoelectric-based automotive waste heat recovery system with a nanofluid coolant is analyzed in this study. Comparison between Cu-Ethylene glycol (Cu-EG) nanofluid coolant and ethylene glycol with water (EG-W) coolant under equal mass flow rate indicates that Cu-EG nanofluid as a coolant can effectively improve power output and thermoelectric conversion efficiency for the system. Power output enhancement for a 3% concentration of nanofluid is 2.5–8 W (12.65–13.95%) compared to EG-Water when inlet temperature of exhaust varies within 500–710 K. The increase of nanofluid concentration within a realizable range (6%) has positive effect on output performance of the system. Study on the relationship between total area of thermoelectric modules (TEMs) and output performance of the system indicates that optimal total area of TEMs exists for maximizing output performance of the system. Cu-EG nanofluid as coolant can decrease optimal total area of TEMs compared with EG-W, which will bring significant advantages for the optimization and arrangement of TEMs whether the system space is sufficient or not. Moreover, power output enhancement under Cu-EG nanofluid coolant is larger than that of EG-W coolant due to the increase of hot side heat transfer coefficient of TEMs.
Keywords: nanofluid; heat transfer enhancement; thermoelectric generator; waste heat recovery nanofluid; heat transfer enhancement; thermoelectric generator; waste heat recovery

Waste heat contained in exhaust gas is transferred from the hot side to the cold side of TEMs and is finally taken away by the coolant. This heat transfer process is vital for the performance of the TEG system. Due to the complexity of this process, some hypotheses are made for simplifying the mathematical model as follows:

(1)
The heat transfer process is steady;
(2)
All the TEMs in the system are in series. Geometric configurations properties of P-type and N-type materials are identical, and physical properties of each P-type legs are identical, as well as the N-type legs;
(3)
Air between TEMs and heat exchangers are omitted because it is quite small. Thermal radiation is not taken into consideration. Contact resistance between TEMs and heat exchangers, thermal resistance perpendicular to flow direction of fluid, and Thomson effect are also omitted;
(4)
The external load resistance is equal to the internal resistance;
(5)
Thermoelectric material used in this study is Bi2Te3, its thermoelectric parameters are constants, and Table 1 presents the basic calculation parameters.

According to the different flow directions of the hot and cold fluid, there are two typical modes exist in the TEG system, namely, parallel flow mode and counter flow mode. These two modes are completely symmetrical in structure and perform under the same mechanism. Thus, only a parallel flow heat exchanger, namely, flow directions of exhaust and coolant are the same, is adopted for the TEG system in this study. The schematic of the TEG system is presented in Figure 1a, and the mathematical model for the TEG system is shown in Figure 1b. All the TEMs are divided into nx × ny computation units, and each unit is a P-N junction. The direction of fluid is defined as x direction, and along this direction there are nx rows, which are marked by i (i = 1, 2, …, nx). Similarly, the perpendicular direction is defined as y, and there are ny columns that are marked by j (i = 1, 2, …, ny). A coordinate plane is formed based on the row and column number and the coordinate of computing unit can be represented as (i, j).
A P-N junction marked (i, j) along the y direction is chosen for calculation. The inlet temperature of exhaust gas is and the outlet temperature is . The inlet temperature of coolant (Cu-EG nanofluid or EG-W) is and the outlet temperature is . Due to the small cross-sectional area of a junction, the average value of the inlet temperature and outlet temperature is used to represent fluid (exhaust gas/coolant) temperature in this junction, namely, and . Temperature of the hot side and cold side is and , and heat flux across the hot side and cold side is and , respectively. It should be pointed out that the outlet temperature of fluid in the former junction is equal to the inlet temperature of fluid in the latter junction. Apparently, along the y direction, all the P-N junctions in the same column have identical temperature distribution. Thus, each column along the y direction is considered as a computing unit.
TEMs convert the waste heat of exhaust into electricity, and the power output depends on the circuit current. According to the thermodynamic equilibrium theory, considering Joule effect, Peltier effect, and heat conduction loss of TEMs, governing equations of heat transfer process are as follows [23,24]:
In Equations (1) and (2), three terms on the right side represent Joule effect, Peltier effect, and heat conduction loss, respectively. is Seebeck coefficient of a P-N junction, is the thermal resistance of a P-N junction, and is electrical resistance of a P-N junction. These three parameters can be calculated as follows:
Because the thermal resistance of the heat exchanger is omitted, heat flux across the hot side and cold side of TEMs can be described by Newton’s cooling law as Formula (6) and (7), in which A denotes the cross section area of a P-N junction and and are heat transfer coefficient across the hot side and cold side of TEMs.
From the perspective of energy transport, it can be found that, due to the assumption of steady state, heat absorbed by the hot side of TEMs is equal to the heat loss of the exhaust. Likewise, heat loss of the cold side of TEMs is equal to the heat absorbed by the coolant. These relationships can be written as follows:
All the P-N junctions in the system are in series. Thus, current in each junction is identical to the total circuit current. Along the y direction, the total output voltage provided by junctions in a column is calculated as follows:
The total open voltage for the system can be calculated as follow:
Total resistance in the circuit is,
As a consequence, circuit current can be calculated as follows according to Ohm’s Law:
In order to solve the governing equations, initial and boundary conditions should be prescribed. In this study, the initial inlet temperatures of exhaust and coolant (Cu-EG nanofluid or EG-W) are known, and boundary conditions are given as follows:
Note that in Formulas (6) and (7), the heat transfer coefficients across the hot side and cold side of TEMs, namely, and should be prescribed. In this study, an empirical value 80 W m2 K−1 is given for [24]. The heat transfer coefficient between cold side of TEMs and coolants (Cu-EG nanofluid and EG-W) can be calculated according to following the heat transfer correlations proposed for Cu-EG nanofluid in laminar and turbulent conditions [25]: in which denotes the Nusselt number of nanofluid, heat transfer coefficient can be calculated through the formula , denotes the Peclet number of nanoparticle , Reynolds number of nanofluid and Prandtl number of nanofluid , thermal diffusivity of nanofluid . Thermophysical properties of nanofluid are defined as follows [26,27]:
As can be seen in Equation (13), the current I was determined by the whole temperature distribution on the TEG system. Meanwhile, the temperature distribution was also affected by the current I. As can be seen in Equations (1) and (2), the current I, cold side temperature of TEMs and hot side temperature of TEMs coexist. Therefore, there is a coupled relationship between the temperature and the electric field. Since the temperature distribution of TEMs coupled with the circuit current, the iterative method presented in Figure 2 is applied to solve the governing equations, at the beginning, the number of rows along x direction nx and number of columns along y direction ny are prescribed. Then, initial current value I0 is given to solve the temperature distribution of the TEG system. According to the calculated temperature field, a new current I can be obtained and this new current I will be compared with the initial current I0. If these two value are not consistent, the new current I is set as the initial current I0 for the iterative calculation until the two values are consistent.
Power output and thermoelectric conversion efficiency are the two most important parameters to evaluate the performance of a thermoelectric-based waste heat recovery system. Thermoelectric conversion efficiency is defined as the ratio of total power output and heat absorbed from exhaust. These two parameters can be calculated by following formulas:

3.3. Analysis of Total Area of TEMs

3.4. Effect of Hot Side Heat Transfer Coefficient of TEMs

The present study investigates performance of thermoelectric based automotive waste heat recovery system with nanofluid coolant. Power output and thermoelectric conversion efficiency of the TEG system are compared between two coolants: Cu-EG nanofluid and EG-W. Moreover, key factors for system output performance, such as inlet temperature of exhaust gas, concentration of nanofluid, and total area of TEMs, are comparatively analyzed. Key findings of the present study are as follows:

Zhi Li and Zhen Chen conceived and performed the numerical experiments; Wenhao Li analyzed the data and wrote the paper. 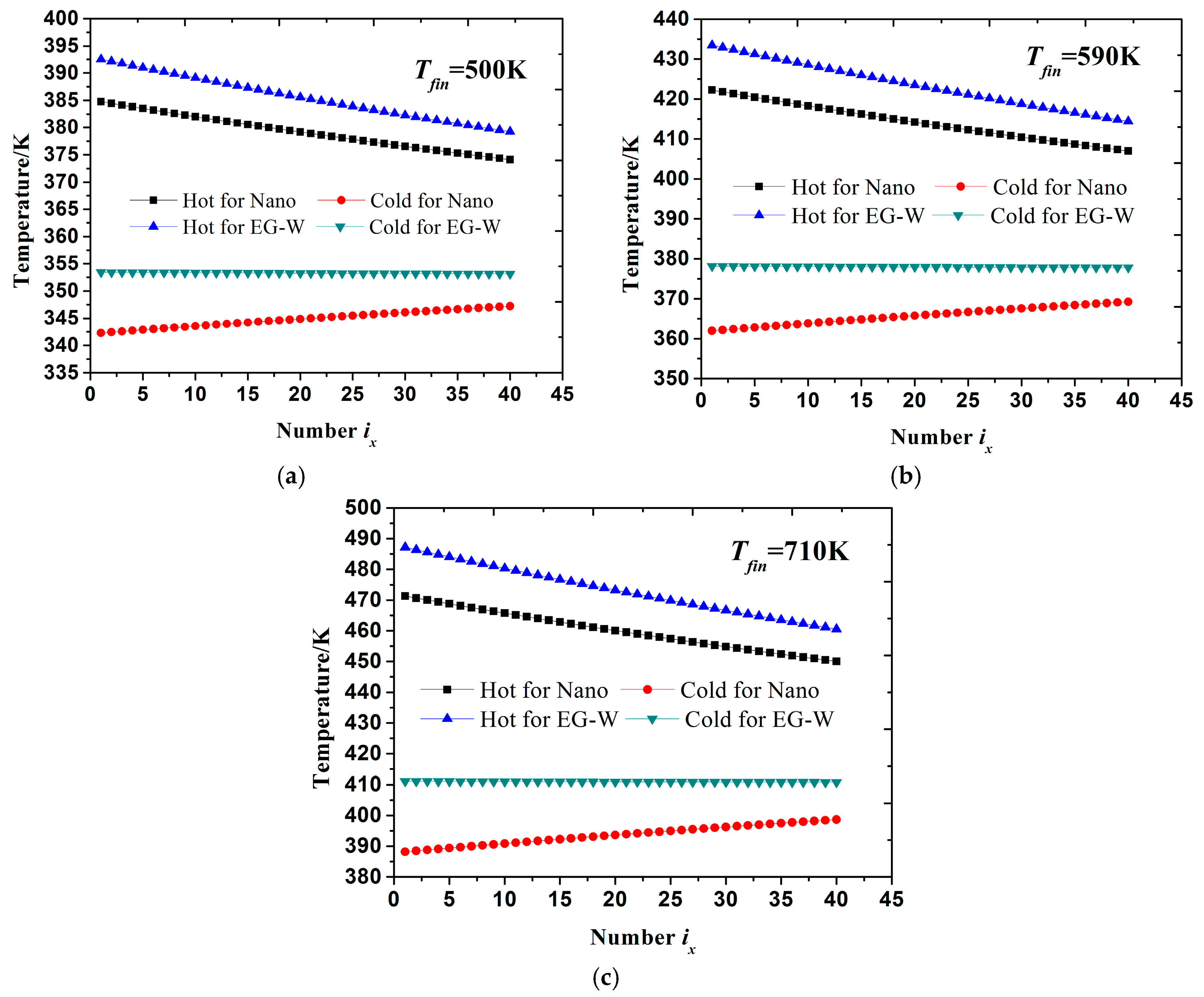