Real-Time Velocity Optimization to Minimize Energy Use in Passenger Vehicles

Early detection of an internal short circuit (ISCr) in a Li-ion battery can prevent it from undergoing thermal runaway, and thereby ensure battery safety. In this paper, a model-based switching model method (SMM) is proposed to detect the ISCr in the Li-ion battery. The SMM updates the model of the Li-ion battery with ISCr to improve the accuracy of ISCr resistance estimates. The open circuit voltage (OCV) and the state of charge (SOC) are estimated by applying the equivalent circuit model, and by using the recursive least squares algorithm and the relation between OCV and SOC. As a fault index, the is estimated from the estimated OCVs and SOCs to detect the ISCr, and used to update the model; this process yields accurate estimates of OCV and . Then the next is estimated and used to update the model iteratively. Simulation data from a MATLAB/Simulink model and experimental data verify that this algorithm shows high accuracy of estimates to detect the ISCr, thereby helping the battery management system to fulfill early detection of the ISCr. View Full-Text
Keywords: internal short circuit resistance; model updating method; battery safety internal short circuit resistance; model updating method; battery safety
►▼ Show Figures 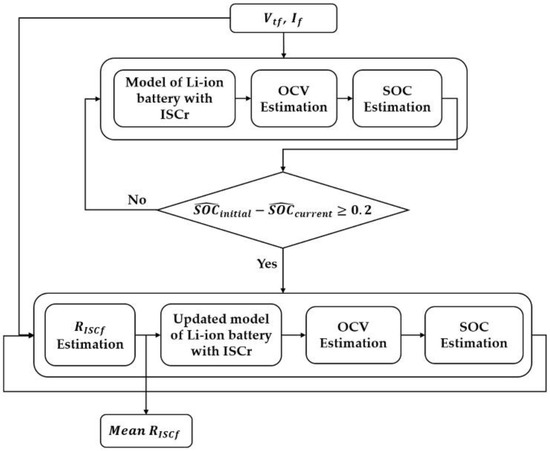