Black Currency of Middle Ages and Case for Complementary Currency

Digital Payments, the Cashless Economy, and Financial Inclusion in the United Arab Emirates: Why Is Everyone Still Transacting in Cash?

Following the oil price downturn of 2015 and its wide-ranging economic repercussions, the United Arab Emirates and fellow Gulf Cooperation Council (GCC) countries have worked hard to expand digital payments in the interest of improved tax and revenue collection, as well as the greater transparency and security associated with moving away from cash. Regulatory reforms have resulted in a deep transformation and diversification of the payment landscape, with a widespread consensus among monetary authorities and financial institutions about the benefits of a cashless economy for businesses and individuals in terms of efficiency gains and ease of payments. The UAE’s national payments strategy seeks a gradual transition to a cashless economy, while in Saudi Arabia the central bank has set out to achieve 70 percent cashless payments by 2030. The two countries have also unveiled plans to launch a central bank digital currency called “Aber” backed by distributed ledger technologies, to be trialed initially for cross-border payments by a small pool of participating banks, and expanded for wider use. Yet despite a concerted effort by monetary authorities, banks, and the payments industry to replace cash with digital payments, cash continues to dominate payments in the GCC. The objective of this paper is to explore the reasons as to why cash is so persistent in the GCC states, and whether the adoption of a digital payments eco-system modelled on South Korea and Sweden is appropriate for these countries in light of their relatively large unbanked populations and the continued importance of cash-based remittances.

Economists have long seen the reduction in the use of cash and the transition to digital payment methods as part of the natural evolution of monetary and payment systems (Trautwein 1997). Much of the literature related to the cashless or the “pure credit” economy has focused on the implications of the elimination of cash for interest rates, prices, and output. Woodford, for example, has demonstrated how in a cashless economy central banks can manage price levels through control over nominal interest rates, enabling markets to operate normally (Walsh and Woodford 2005). More recently, Rogoff (2016) has argued that policies aimed at reducing cash or at least eliminating large notes can contribute to reining in the shadow economy, illicit trade, and tax evasion. He notes that the shadow economy in the United States accounts for between 7 to 10 percent of GDP, resulting in a significant loss of tax revenue to the US government, and is facilitated by the anonymity associated with cash transactions, compared to more traceable digital payment methods (Rogoff 2015).
Despite a wide consensus around the potential benefits of a cashless economy, the concept has not been without its detractors. Cohen et al. (2020) demonstrate that cash plays an essential role in intermediating transactions between the formal and informal sectors, and that its elimination can disrupt the ability to trade between these sectors, leading to a misallocation of productive efforts across an economy. The authors also bring to light other potentially unexpected negative consequences, such as the greater lengths actors in the shadow economy will go to launder money into the official sector in the absence of cash. Lagos and Zhang (2019), for their part, have shown the existence of a “cashless limit” in a pure credit economy, arguing that even if money is not frequently used, the fact that it is available as an alternative to credit has important implications for aggregate consumption, investment, and output.
Most studies have addressed the topic from a theoretical perspective or from the context of advanced economies. Much less work has been done on the desirability of eliminating cash in favor of digital payments in emerging economies, and on the relationship between cash and digital payments in countries with high levels of socio-economic inequality. India’s, albeit dramatic, experience with demonetization in late 2016, when the government withdrew large denomination notes with the intention of enhancing tax collection and shrinking the informal economy, has served to shed some light on this issue. Bajaj and Damodaran (2020) found that in the period following demonetization, aggregate household output declined by 20 percent, and aggregate welfare by 16 percent, with the consequences unevenly distributed between urban and rural households. The authors also described how switching to digital payments involved an entry cost which was unaffordable to the lower income deciles, whose welfare was more adversely affected than their wealthier counterparts. Karmakar and Narayanan (2019), for their part, found that households with no bank accounts experienced significant declines in both income and spending in the month following demonetization, with many resorting to informal borrowing to meet immediate needs.

3. The Transformation of the Payments Eco-System in the UAE

4. The Relationship between Cash and Digital Payments in Emerging Economies

The broader point related to the cashless economy, both in the economics literature as well as in payment industry circles, is that the choice between cash and digital payments is often presented as a binary one. This supposes a linear evolution from cash to digital payments, where a rise in digital payments should result in a decline in the use of cash. It is a view that intuitively makes sense and is often repeated in GCC banking and payment industry circles. Reality, however, appears to be more nuanced, with empirical data showing that for most emerging and advanced economies, both digital payments and cash-in-circulation are on the rise. Figure 4 looks at currency-in-circulation as a percentage of GDP for nine major developed and emerging economies, showing declines only in Russia and Sweden since 2007. In the seven other markets, including Saudi Arabia and the UAE, currency-in-circulation—that is, cash outside of banks and deposit-taking institutions—has increased. Some interesting work has been done to explain this counter-intuitive phenomenon, even if it is not yet fully understood.
Ashworth and Goodhart (2020), analyzing the Eurozone, Japan, the United Kingdom, and the United States, demonstrate remarkably that cash-in-circulation has been consistently on the increase in these markets since the 1990s. Recent increases could be correlated to the low interest rates that have prevailed since the global financial crisis, as well as the rise of the shadow economy and informal work. A BIS study focused on 20 emerging and advanced economies for the period 2000 to 2016 found that cash-in-circulation had increased from 7 to 9 percent of GDP during the period (Bech et al. 2018). The report reached similar conclusions with regard to low interest rates, as individuals had less incentive to hold money in savings accounts. The authors also found that currency holdings related particularly to higher denomination notes, leading them to speculate that money was likely being held more with a store-of-value purpose in mind than as a means of payment.
Less is known about the reasons underlying the increase in cash-in-circulation in emerging economies or those with large unbanked populations. Anecdotal evidence suggests that the adoption of mobile money and e-wallets as alternatives to bank accounts has resulted in an expansion of the cash-based economy. More than 60 percent of mobile money transactions globally are based on the cash-in-cash-out model, where individuals utilize licensed agents to either top-up or receive cash held in mobile wallets, enabling them to disburse salaries or transact peer-to-peer payments across large distances (Naghavi 2019). Additionally, this is not just for within-country transfers. A significant proportion of remittances between France and major west African economies like Côte d’Ivoire, Mali, and Senegal are transacted via Orange Money, one of the most widely used mobile money applications in French-speaking Africa.
Similarly, in South Africa, the country’s leading economics advisory firm, Genesis Analytics, found in 2018 that a rise in non-performing micro-loans had resulted in a return to mobile money, prepaid cards and cash, and an avoidance of bank accounts, where positive balances can automatically be debited to settle outstanding debts. To match the services offered by mobile money, South African banks also enabled their customers to make instant cash transfers to anyone in the country with access to an ATM terminal, with no need for the recipient to hold an account at the bank (Ketley 2018); another example of digital technologies expanding cash-in-circulation. What these trends reveal is that for many emerging markets, the relationship between cash and digital payments may not be a zero-sum game. Rather, the cash-based and the digital economy appear to reinforce each other, with digital technologies boosting cash-in-circulation, and cash-in-circulation in turn sustaining the digital payments eco-system. While further study is required to better understand these trends in emerging markets, what they suggest is that policies seeking to eliminate cash prematurely may result in more harm than good.

The drive towards a cashless economy in Saudi Arabia and the UAE seems to have hit a wall, despite the best efforts of monetary authorities, banks, and the payments industry to establish a world-class digital payments eco-system modelled on South Korea and Sweden. Both economies remain heavily cash-reliant, with cash accounting for 67 percent of the total value of payments in the UAE in 2019, and 64 percent in Saudi Arabia. Explanations for this trend tend to point to infrastructure readiness, cybersecurity concerns, and high transaction costs, particularly merchant service fees for small businesses. Much less work, however, has been done to understand the socio-economic context in which countries like South Korea and Sweden, among the world’s most egalitarian societies, have reduced their reliance on cash and diversified their payment eco-systems, and whether this is comparable to the UAE, where an estimated 35 percent of the working population is unbanked, where cash-based remittance corridors continue to be important, and where informal lending is still prevalent among businesses and households. In discussing the cases of Saudi Arabia and the UAE, this paper has also sought to reflect on a tendency in economics, as well as in industry circles, to see cash and digital payments in binary terms, with a linear evolution expected from one to the other. In reality, across the world cash-in-circulation is increasing in parallel with digital payments, in a dynamic that is still not fully understood. For emerging economies, it may well be that cash and digital payments play complementary and not alternative roles. This does not mean that such countries should renounce plans to become cashless economies, but that these plans would need to be backed by financial inclusion initiatives that promote equitable access to digital financial services, connectivity, and infrastructure. The alternative could mean adding digital exclusion to long-standing socio-economic exclusion.

Publication of this paper was financially supported by Monneta (monneta.org), a German non-for-profit organization, and the Development Economics Research Group at the International Institute of Social Studies (ISS) of Erasmus University Rotterdam (www.iss.nl). The author wishes to thank Georgina Gomez at the ISS for her virtual seminar on money plurality held in May 2020, which led to the idea for this paper. 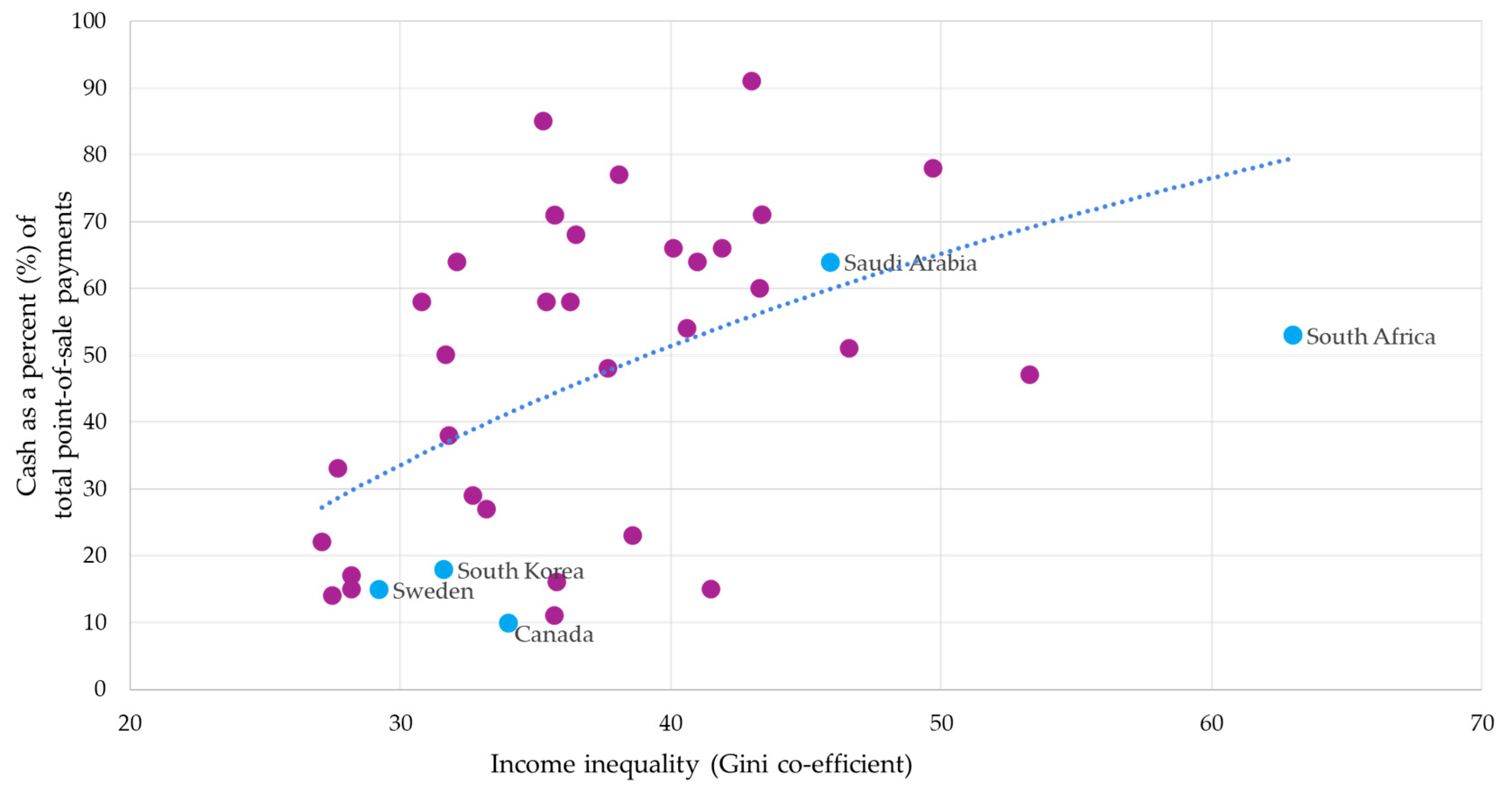