QE versus the Real Problems in the World Economy

:
Financial volatility obeys two fascinating empirical regularities that apply to various assets, on various markets, and on various time scales: it is fat-tailed (more precisely power-law distributed) and it tends to be clustered in time. Many interesting models have been proposed to account for these regularities, notably agent-based models, which mimic the two empirical laws through a complex mix of nonlinear mechanisms such as traders switching between trading strategies in highly nonlinear way. This paper explains the two regularities simply in terms of traders’ attitudes towards news, an explanation that follows from the very traditional dichotomy of financial market participants, investors versus speculators, whose behaviors are reduced to their simplest forms. Long-run investors’ valuations of an asset are assumed to follow a news-driven random walk, thus capturing the investors’ persistent, long memory of fundamental news. Short-term speculators’ anticipated returns, on the other hand, are assumed to follow a news-driven autoregressive process, capturing their shorter memory of fundamental news, and, by the same token, the feedback intrinsic to the short-sighted, trend-following (or herding) mindset of speculators. These simple, linear models of traders’ expectations explain the two financial regularities in a generic and robust way. Rational expectations, the dominant model of traders’ expectations, is not assumed here, owing to the famous no-speculation, no-trade results.
Keywords:
volatility clustering; power law; trend following; efficient market hypothesis; liquidity

Let be the price of a financial asset at the closing of period let the return (or relative price change) be The two empirical regularities read formally: (1) for big values where often being merely a normalizing constant); (2) over a long range of lags while for almost all Figure 1 and Figure 2 illustrate these two regularities for General Electric’s daily stock price and the New York Stock Exchange (NYSE) daily index7.

Following a traditional dichotomy, consider a financial market populated by two types of traders: (short-term) speculators, who buy an asset for anticipated capital gains; and (long-run fundamental-value) investors, who buy an asset based on its fundamental value. Let the (excess) demands of an investor and a speculator be respectively8: where is a speculator’s estimation of the asset’s future price, is an investor’s estimation the asset’s present value, and the parameters Let and be, respectively, the numbers of investors and speculators active in period t. The overall (market) excess demand is: where and are the average investor valuation (hereafter referred to simply as ‘the value’ of the security) and the average speculator anticipated future price.
Assume the following standard price adjustment, in accordance with the market microstructure literature9: where is the overall market liquidity (or market depth) and Let the overall price impact of speculative and investment orders be denoted respectively as
The two Equations (3) and (4) combined yield:

Let the arrival of exogenous news relevant to investors and speculators be modeled as random events and occurring with probability and leading the traders to additively revise their prior estimations of the asset by the amounts and respectively (which can be assumed normally distributed by aggregation). There is no harm in assuming namely a common access to the same news by all the traders. Thus the traders’ valuations of the asset follow a random walk: and where and are the indicator functions associated with the advent of the news. The amount of information the news reveals to the traders about the asset’s worth can be precisely quantified: and respectively. This news-driven random-walk of traders’ expectations should be distinguished from a standard assumption in the agent-based literature, introduced perhaps by Lux and Marchesi (1999), whereby an asset’s fundamental value is modeled as a noise-driven random walk, where the noise is a Gaussian white noise. The difference between a news and a noise is simple: a noise can be formally defined as a news that carries zero information 10
All in all, the asset’s price dynamics reads:
Because both types of traders are behaviorally equivalent, the investor-speculator dichotomy is of no substance in this specific model: is equivalent to and both are entirely driven by exogenous news. In other words, the market thus modeled is in fact a non-speculative purely news-driven market of investors. Figure 3 shows a simulation of this model, and Figure 4 shows five superposed sample paths of the model. All the parameter specifications are reported in Table 1 in Section 4. The clustering of volatility is generic in this model; but, as is clear from Figure 3, the model suffers from an obvious non-stationarity of the return process due to the double random walk of the traders’ expectations; thus the graphical impression of a robust fat tail is an artefact: it does not make sense to say that the distribution is fat-tailed (since the returns are in fact drawn from different distributions; for example, the standard deviation of the return varies greatly from sample to sample, as should be expected).

Let the speculators’ anticipated return be denoted by:
Trend-following implies that speculators’ overall anticipated return is of the form where we have added the impact of exogenous news on speculators’ expectations. The weighting scheme can be computed explicitly from standard moving-average trend-following techniques used by financial practitioners (Beekhuizen and Hallerbach 2017). In a purely speculative market , the asset’s return is then This RCAR model generates, under quite general and mild technical conditions, a strictly stationary power law tail where the exponent depends solely on the joint distribution of and not on the exogenous news (Klüppelberg and Pergamenchtchikov 2004; Buraczewski et al. 2016). But this strict stationary property comes at a price, as noted in the introduction: for any such autoregressive model, and for any arbitrary function when it is well-defined, decays rapidly, at an exponential rate, with the lag (Mikosch and Starica 2000; Basrak et al. 2002). Thus, volatility cannot be long-range correlated in this purely speculative trend-following model, whether measured as or more generally by any function .

The two polar models emphasize a tension between the endogenous and the exogenous causes of volatility: the purely exogenous, news-driven, expectations, produces a clustering of volatility but induces a trivial non-stationarity; whereas the purely endogenous feedback-inducing trend-following expectations generates a stationary power-law tail but cannot account for volatility clustering. The simplest compromise between these two notions consists of maintaining a purely exogenous, news-driven investors’ valuations, but to assume that the speculators’ anticipated return is partly endogenous (self-referential, or reflexive) and to write where to capture the (exponentially decaying) short-memory of speculators’ concerning a fundamental news, but so that incoming news have a lasting enough impact upon the speculators’ expectations.11 The purely news-driven random walk of investors’ valuations, on the other hand, implies that the asset’s value incorporates all the fundamental news (news relevant to investors) in the sense that making the natural estimate of the asset’s fundamental value in this model.
All in all, the asset’s price dynamics in the general model reads:
Figure 5, Figure 6 and Figure 7 are simulations of the model using the parameter specifications in Table 1.

Both the fat tail and the volatility clustering are generic and robust in the model: they hold for a broad class of distributions and parameters. The specifications in Figure 3, Figure 4, Figure 5, Figure 6 and Figure 7 are chosen merely for illustration, except to reflect realistic orders of magnitude compared to empirical data (notably the standard deviation of return which is typically around 1). Also, in all the simulations: periods; and are independent identically distributed (IID) exponential processes; and are zero-mean Gaussian IID processes. The differing parameter choices are reported in Table 1.

This paper suggests a simple explanation for excess and clustered volatility in financial markets through a simple synthesis of the two major paradigms in financial theory. Excess volatility means that price fluctuations are too high given the underlying fundamentals, which is an intrinsic feature of the model, owing to the amplifying feedback intrinsic to speculative trading, as illustrated more strikingly in Figure 7, in which the fundamental value is kept constant. Clustered volatility simply reflects, in this theory, the traders’ persistent memory of exogenous news concerning the asset’s present value or future price: this persistent memory of news leads to persistent trade responses and persistent volatility. The two empirical facts are thus reduced to simple explanations, through basic linear processes. 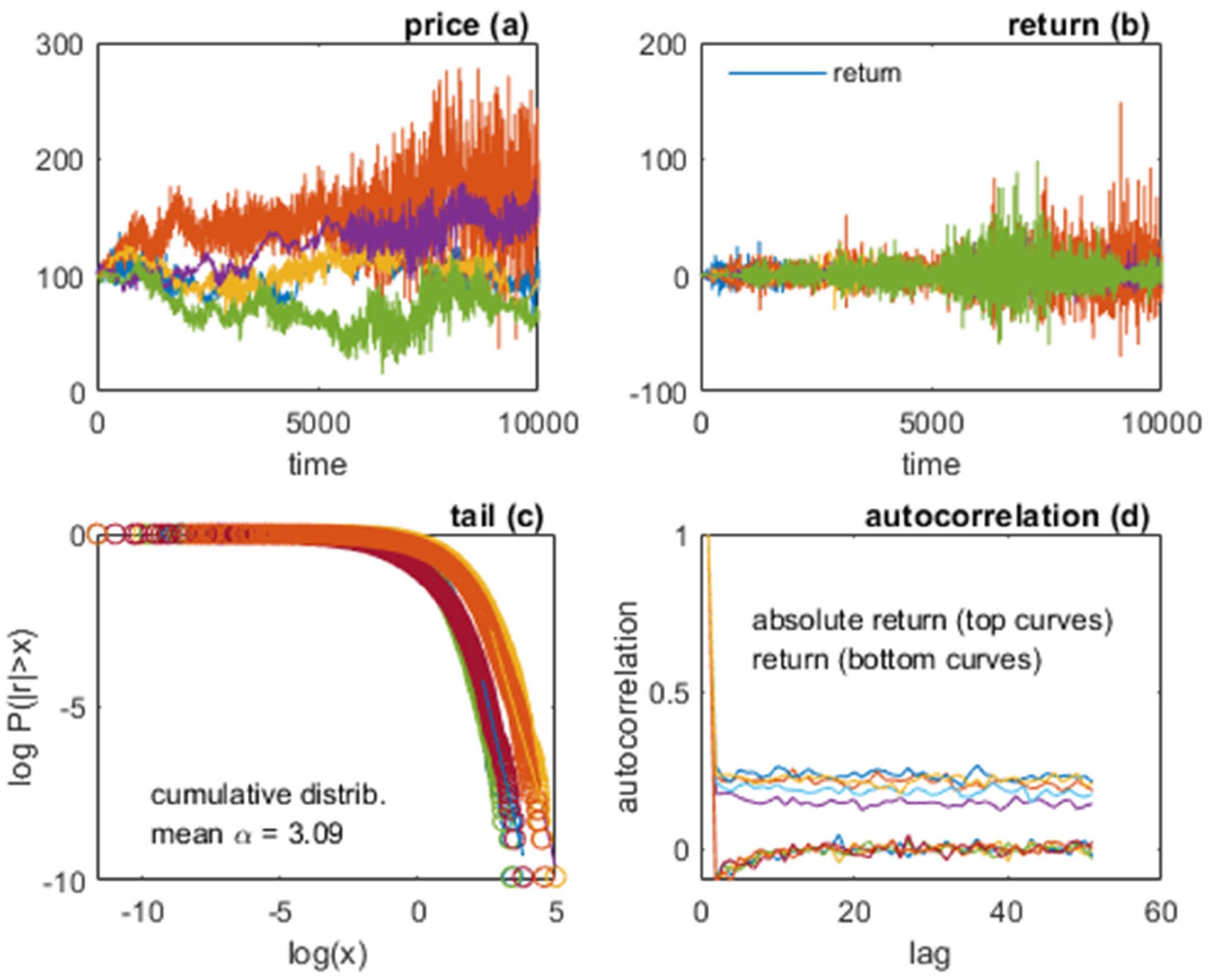 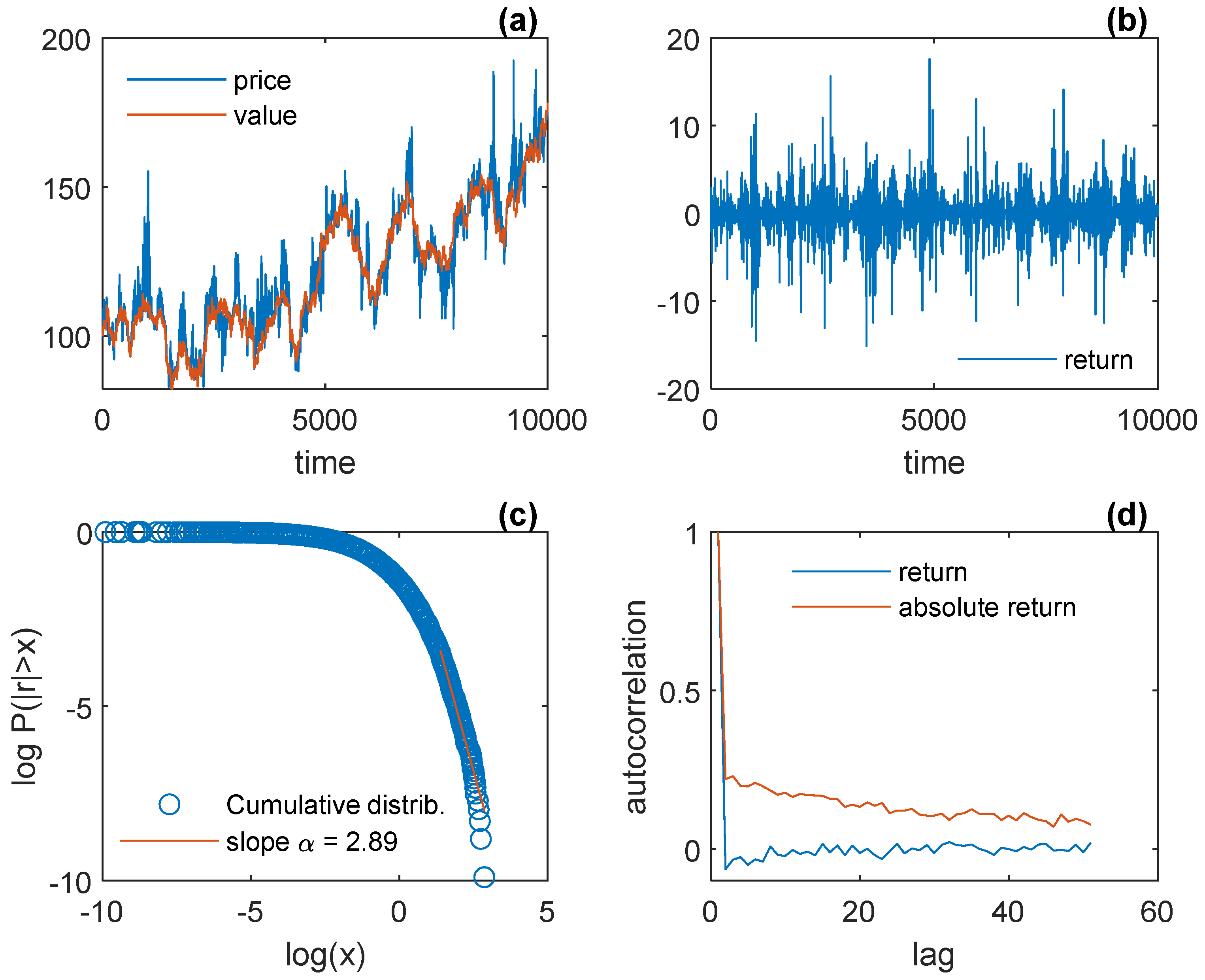 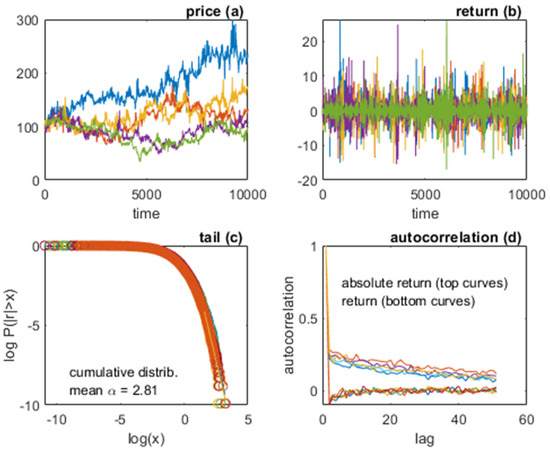 Table 1. Parameter specifications.
Table 1. Parameter specifications.
1 Five sample paths superposed. 2 Average over five sample paths. 3 Left subplots (a)–(d). 4 Right subplots (a′)–(d′).
© 2020 by the author. Licensee MDPI, Basel, Switzerland. This article is an open access article distributed under the terms and conditions of the Creative Commons Attribution (CC BY) license (http://creativecommons.org/licenses/by/4.0/).
We use cookies on our website to ensure you get the best experience. Read more about our cookies here.
Accept
We have just recently launched a new version of our website. Help us to further improve by taking part in this short 5 minute survey here. here.
Never show this again