A Risk Management Approach for a Sustainable Cloud Migration

:
For many developing countries, historical inflation figures are rarely available. We propose a simple method that aims to recover such figures of inflation using prices of postage stamps issued in earlier years. We illustrate our method for Suriname, where annual inflation rates are available for 1961 until 2015, and where fluctuations in inflation rates are prominent. We estimate the inflation rates for the sample 1873 to 1960. Our main finding is that high inflation periods usually last no longer than 2 or 3 years. An Exponential Generalized Autoregressive Conditional Heteroscedasticity (EGARCH) model for the recent sample and for the full sample with the recovered inflation rates shows the relevance of adding the recovered data.
Keywords:
inflation; postage stamps; price recovery; historical time series; EGARCH
JEL Codes:
E31; N10; N16

The World Bank collects annual inflation rates for all countries in the world. For developed countries, such data can be available for a long span of time, also because statistical bureaus for the countries exist for a long time.1 For many developing countries, matters can be different. For example, Benin’s first available inflation figure concerns 1993, whereas Ethiopia’s first quote concerns 1966. There may be various causes for this lack of data, which can relate to a lack of institutions and the effects of decolonization.
For various reasons, one may want to have some impression of historical figures. One would perhaps want to know if a current high inflation period, which indicates a period with risky economic fluctuations, has occurred before and which measures were taken to reduce inflation. Alternatively, one may want to compare inflation patterns across countries to discern similarities or specific differences. In addition, one may want to compute historical data on real GDP, real wages, and purchasing power parity, which all involve price levels. Preferably, one would also want to have annual data without missing data in between.
Recovering historical price levels can be difficult because of lack of information on the prices of many goods and because good and services may have changed substantially over the years. Various recent studies present discussions of methods to recover historical data and the reliability of those historical statistics, see Allen et al. (2011), Bolt and van Zanden (2014), Cendejas Bueno and Font de Villanueva (2015), Deaton and Heston (2010), Frankema and van Waijenburg (2012), and Jerven (2009).
In the present paper, we present a new and very simple method that aims to reconstruct historical inflation rates. We seek to alleviate the issue of changing products over time by considering a product that has not much changed over time and for which prices are immediately available. This product concerns postage stamps. First, postage stamps have been issued in many countries for a long time. Next, the type of product and its use did not change much over the years. In addition, evidently, the price of the stamp is printed on the stamp; see for example Figure 1, where we present a few stamps for Suriname.
In the present paper, and only for illustrative purposes, we consider the historical prices of this South American country, which borders Guyana and Brazil. The World Bank can provide us with annual inflation rates starting in 1961. The first stamps in Suriname were issued in 1873, and hence we aim to retrieve annual inflation rates since that year. We chose Suriname as the estimation sample because it is reasonably large, ranging from, 1961 to and including 2015, as there were many stamps issued per year, and also as there is substantial variation in the inflation figures over time. It also so happens that, at the time of writing this paper in 2016, inflation is again very high, and people may wonder how long high inflation periods typically last.
The outline of our paper is as follows. Section 2 deals with the inflation rates data and with the stamps data, and provides some characteristics. Section 3 deals with two types of models to see if (changes in) postal stamps prices have explanatory value for inflation. One model is a simple regression model, while the other is a MIDAS regression, which fits annual inflation rates to quarterly stamps prices.2 Both models suggest strong predictive power of the stamps prices. Section 4 deals with the backward extrapolation and identifies a few historical periods with excessive inflation rates and their potential causes. Section 5 concludes.

The annual inflation rates for 1961 to 2015 for Suriname are retrieved from the World Bank. Table 1 presents the data, and Figure 2 visualizes the data. Clearly, the data show periods with high inflation, and 1994 stands out with an inflation rate of 368.5 per cent. This number associates with approximately 1.6 per cent per day. Periods with high inflation are 1993 to 1995 and 1999 to 2001, while 1987 was also an exceptional year. The International Monetary Fund provides a review of the potential causes for the high inflation rates in the nineties.3
Table 2 presents the data on the postage stamps, also for the period 1961 to 2015. We consulted two catalogues, and retrieved the median prices of all the stamps in each year. The first catalogue runs until 12 November 1975, a few weeks before Suriname became an independent country on 25 November 1975. Before independence, Suriname was a colony of the Netherlands since the 17th century. The first postage stamp in Suriname was issued in 1873.
The data in Table 2 show that, like inflation, the percentage changes in postal stamp prices can be substantial. The observation in 1994 stands out with a value of 4220.99 per cent. In various years, we also see that price changes were equal to zero.
Figure 3 and Figure 4 provide scatters of inflation versus the percentage changes in stamps prices. The first scatter covers all data, whereas Figure 4 concerns the data except 1994. A first impression is that there may exist a positive relationship between the two series.

Given that, a suitable model for annual inflation rates appears to be we will use the parameter estimates in the final panel of Table 3 to make backward predictions for inflation. That is, for the sample 1873 to 1960, we compute
Figure 7 displays the observations on the changes in the postal stamps prices for these years, which were collected from the first mentioned catalogue in Table 2. In addition, Figure 8 displays the estimated historical inflation observations.
We see that high inflation periods each time last for usually one or one years, and at most four years (Figure 9). Specifically, if we define a high inflation period as a period with inflation higher than 10 per cent, the average length of such a period is 1.45 using the fitted sample from 1873–2015.
Figure 10 displays the actual data from 1961 onward and the estimated data back to 1873 in one single graph. Clearly, the data in the nineties are exceptional. Postal stamps experienced enormous price changes during the 1990s. This period exactly coincides with the hyperinflation that Suriname experienced during that time.
However, various other periods in our forecasting sample are characterized by high inflation rates. Consider for example the 1900s, 1930s, 1940s, and 1950s (specifically 1957). In Table 5, more details on these periods are discussed. The high inflation rates around 1900 coincides with the gold rush at the same time at the Lawa River in Suriname, which amounted to higher tariffs for transportation (see Van Velzen and Hoogbergen (2013)). The higher inflation rates in the 1930s can be related to a period of economic decline and austerity measures, causing social upheaval (Hoefte 2013). The developments in 1940s can be most likely attributed to the consequences of the Second World War. The very high inflation rates as indicated by the peak at 1957 occur in the same year as the establishment of the central bank of Suriname,4 but certainly coincides with the so-called Eisenhower recession.
Finally, Table 6 presents the estimation results of an EGARCH model, measuring risk.5 The model reads as where covers the full sample from 1873 to 2015, with in addition, is a standard normally distributed variable. We need to add 1 to where to make sure that all observations are positive. The estimation results (with Bollerslev-Wooldridge robust standard errors in parentheses) for the sample 1961–2015 and the full sample (1873–2015) with the recovered data shows reasonably similar parameter estimates and much smaller estimated standard errors in the latter case. This seems to support the quality of the recovered inflation figures. with
Estimated using Eviews package 8.0. To reduce the effect of outliers, the data are transformed as indicated. Bollerslev-Wooldridge robust standard errors are in parentheses.

We proposed a simple method to estimate annual historical data on inflation using changes in postal stamps prices. The method seems to work, at least for Suriname. A next step would be to reconstruct historical figures for other countries. If possible, we would want to match our estimates with actually observed inflation rates, should those data be available. 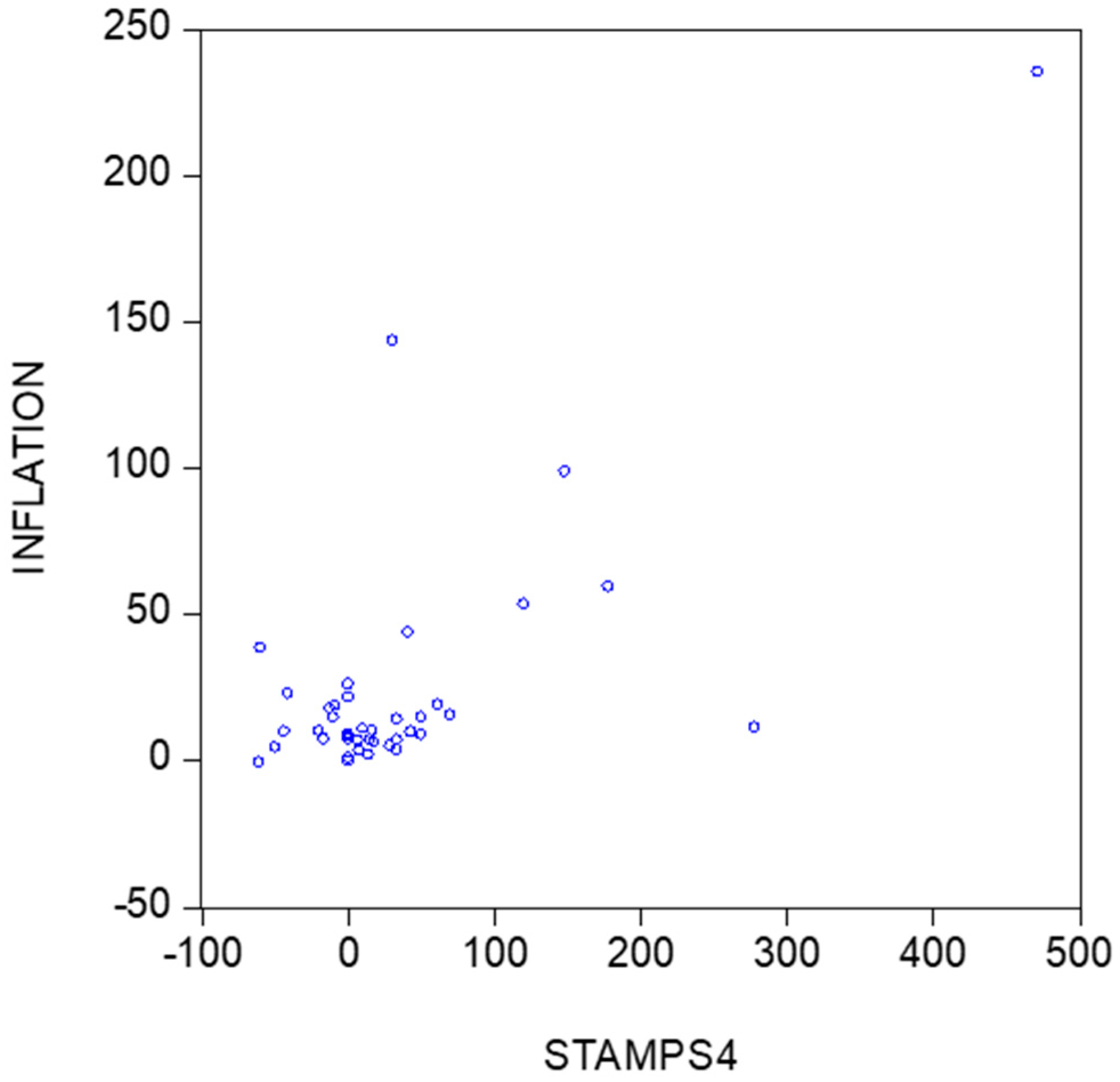 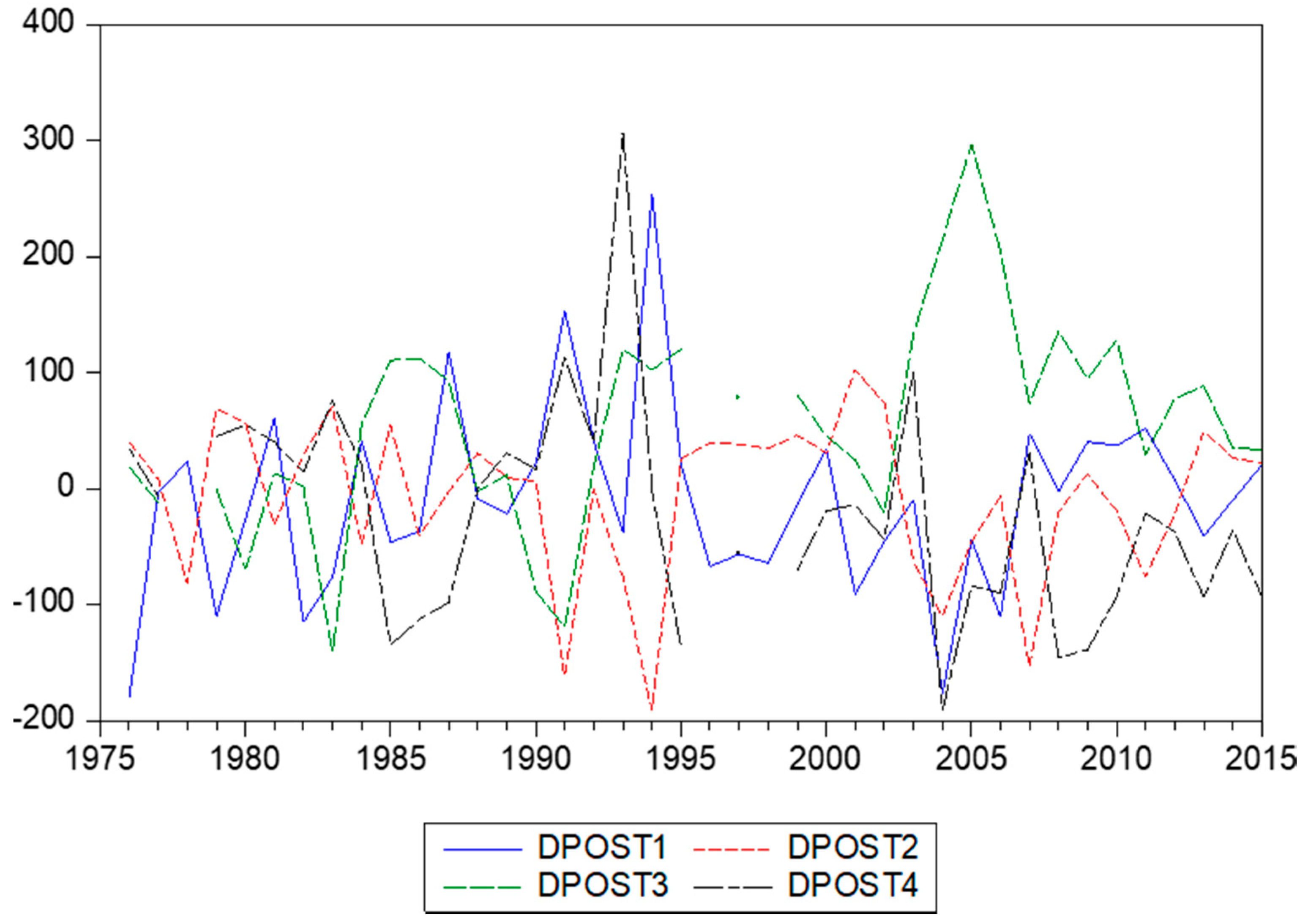 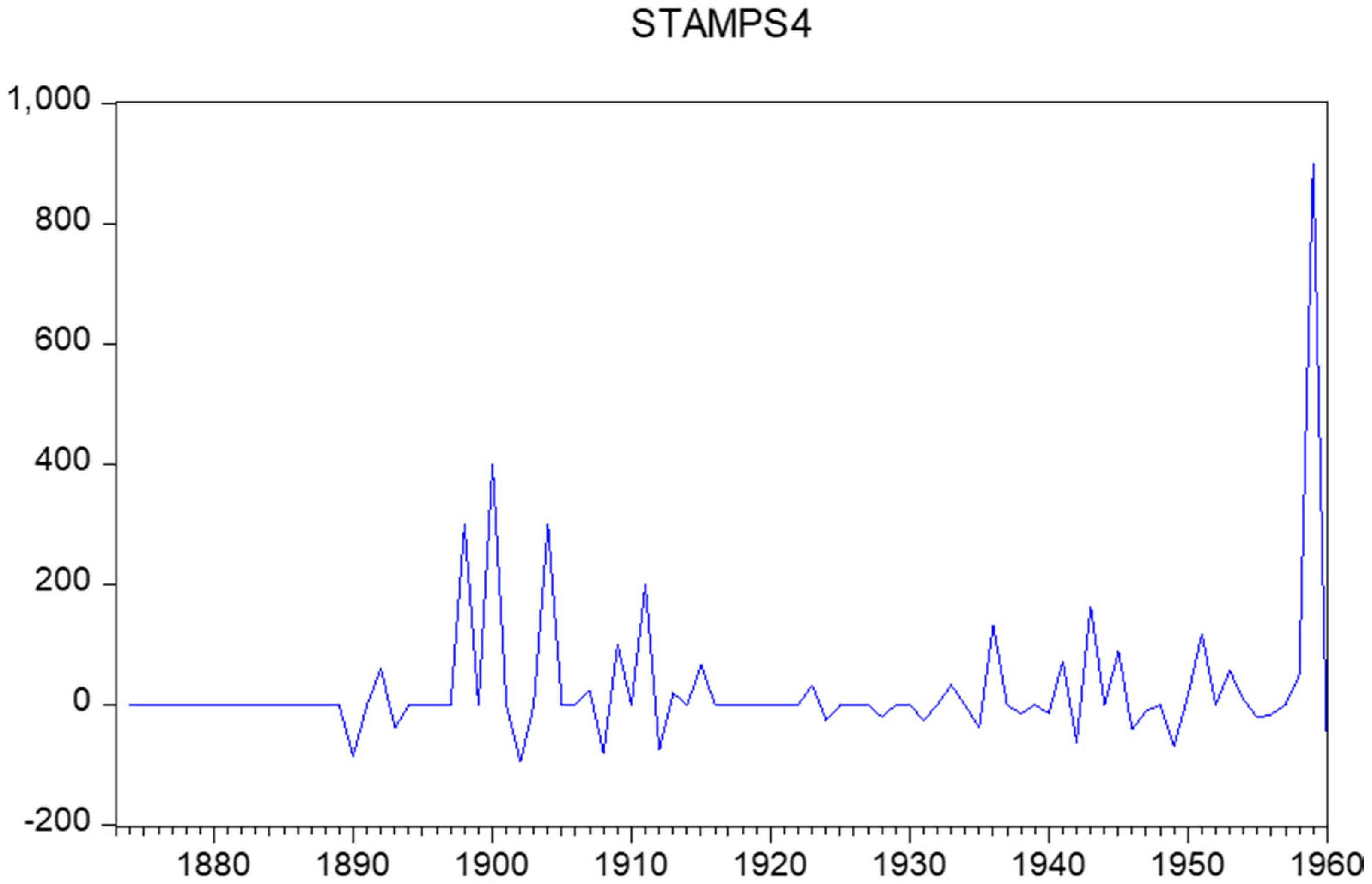 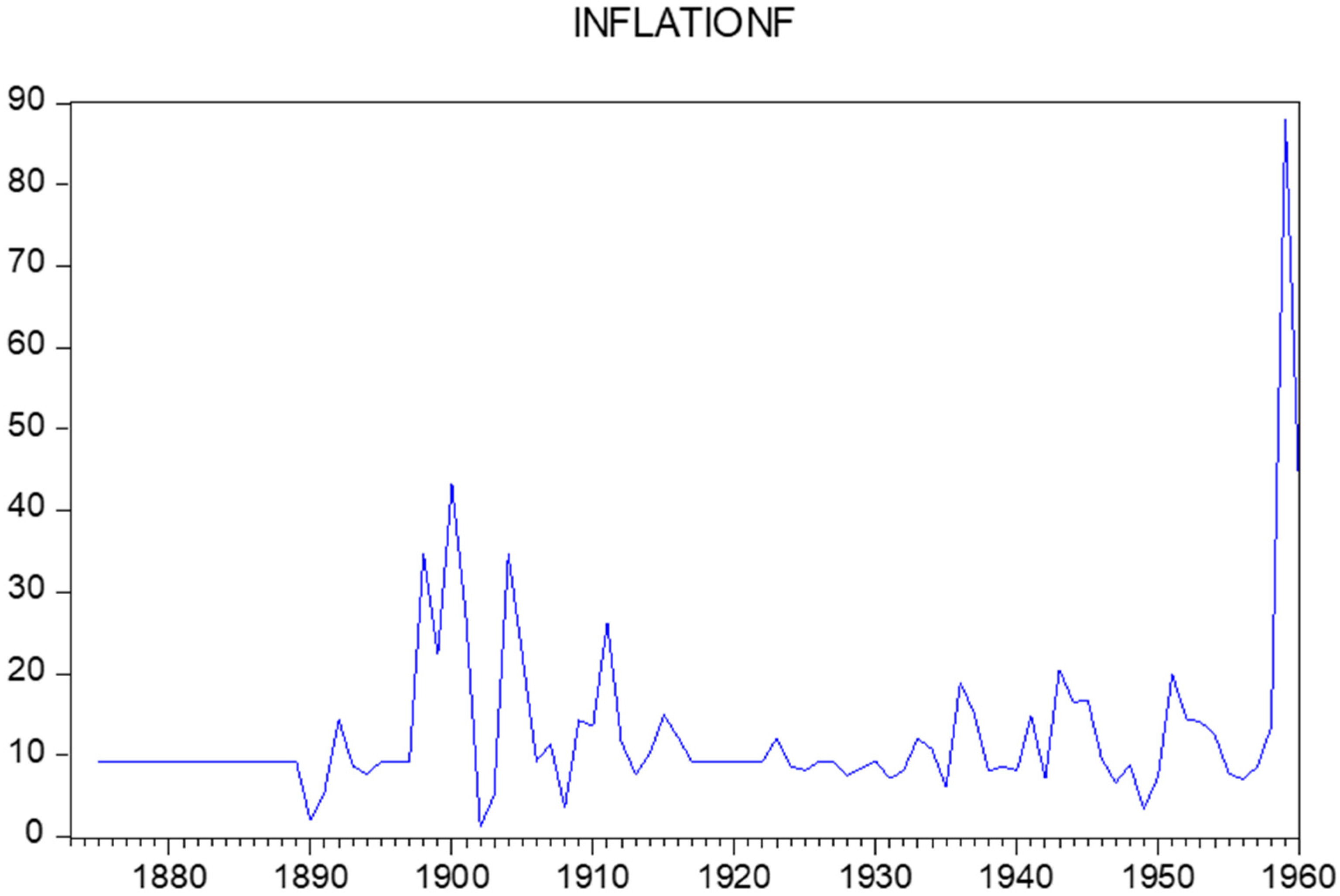 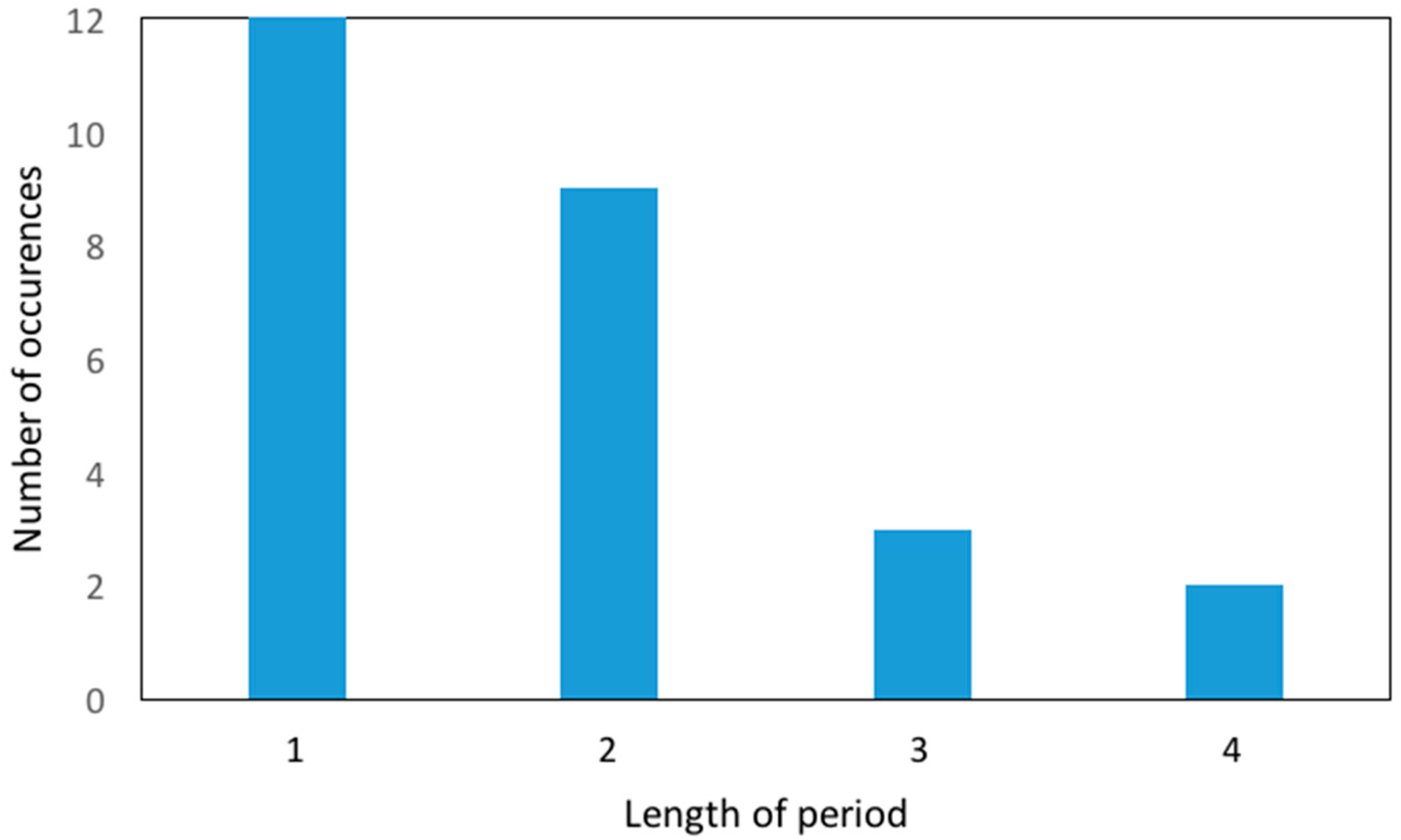