In August 2020, a 62-year-old man was referred to the department of endocrinology at our hospital due to severe muscle weakness that had gradually developed over the past 6 months. On clinical examination, the patient had typical Cushingoid features, including central obesity with supraclavicular and dorsocervical fat accumulation, a round face, proximal muscle atrophy and weakness, facial plethora, therapy-resistant hypertension, and hypokalemia. Endocrine work-up revealed ACTH-dependent Cushing’s syndrome: S-cortisol following 1 mg overnight dexamethasone suppression was 894 nmol/L (normal < 50), S-cortisol at midnight was 690 nmol/L (normal < 130), late-night salivary cortisol was 27 nmol/L (normal < 1), and ACTH was 25 pmol/L (normal 1.6–14). Seven years earlier, the patient was diagnosed with medullary thyroid cancer with liver and lymph node metastasis. Following thyroidectomy, liver resection and surgical removal of mediastinal lymph nodes, s-calcitonin decreased from 5500 pmol/L to 150 pmol/L (normal < 3). In the following years, due to the progression of lymph node metastasis, treatment with tyrosine kinase inhibitors was tested, first with vandetanib and then with cabozantinib. Vandetanib was discontinued after 10 months of treatment because of a lack of effectiveness, and cabozantinib was discontinued due to troublesome side effects, mainly abdominal pain and diarrhoea. Temozolomide, capecitabine and peptide receptor radionuclide therapy with lutetium were also tested but were ineffective.
When the patient was diagnosed with Cushing’s syndrome, treatment with metyrapone (750 mg three times daily) was initiated. Two days later, s-cortisol was under the limit of detection, and hydrocortisone was added in a block-and-replacement regime. On a histopathological re-examination of the tumour, immunohistochemical staining for ACTH was positive. Four days after treatment with metyrapone was started, after an oncogenic mutation in exon 16 of the RET gene was confirmed, i.e., the most commonly affected exon in sporadic cases [5], treatment with selpercatinib (160 mg two times daily) was also initiated. At that time, the patient had several lymph node metastases, the largest being found in the mediastinum (47 × 35 mm) and between the pancreas and aorta (largest diameter was 69 mm) (Figure 1a,c). Six months later, all the cushingoid features had resolved, s-calcitonin had decreased from 580 pmol/L to 3.5 pmol/L (normal < 3), and the metastases had decreased significantly in size.
After further 6 months, s-calcitonin had normalized (1.5 pmol/L), and radiological evaluation showed a profound tumour volume reduction (Figure 1b,d). Furthermore, due to the excellent biochemical and radiological response to selpercatinib, both metyrapone and hydrocortisone were discontinued without a subsequent recurrence of the hypercortisolism. In fact, the patient had instead developed adrenal insufficiency with both unstimulated and stimulated s-cortisol < 60 nmol/L, also indicating an excellent response to selpercatinib. Hydrocortisone replacement was therefore reintroduced.
At the most recent follow-up visit, after 18 months of treatment with selpercatinib 160 mg twice daily, the patient was still in remission and did not experience any significant side effects. In thoracic and abdominal computed tomography, no metastasis could be identified, s-calcitonin was normal, and glucocorticoid replacement therapy was still required for adrenal insufficiency.

Selpercatinib may be a promising treatment alternative in patients with ectopic Cushing’s syndrome due to medullary thyroid cancer, especially when other treatment options such as vandetanib and cabozantinib are ineffective or not tolerated.

Writing—original draft preparation, O.R.; Writing—review and editing, M.P. and A.H. All authors have read and agreed to the published version of the manuscript.

Raw clinical data can be obtained upon request from the corresponding author. 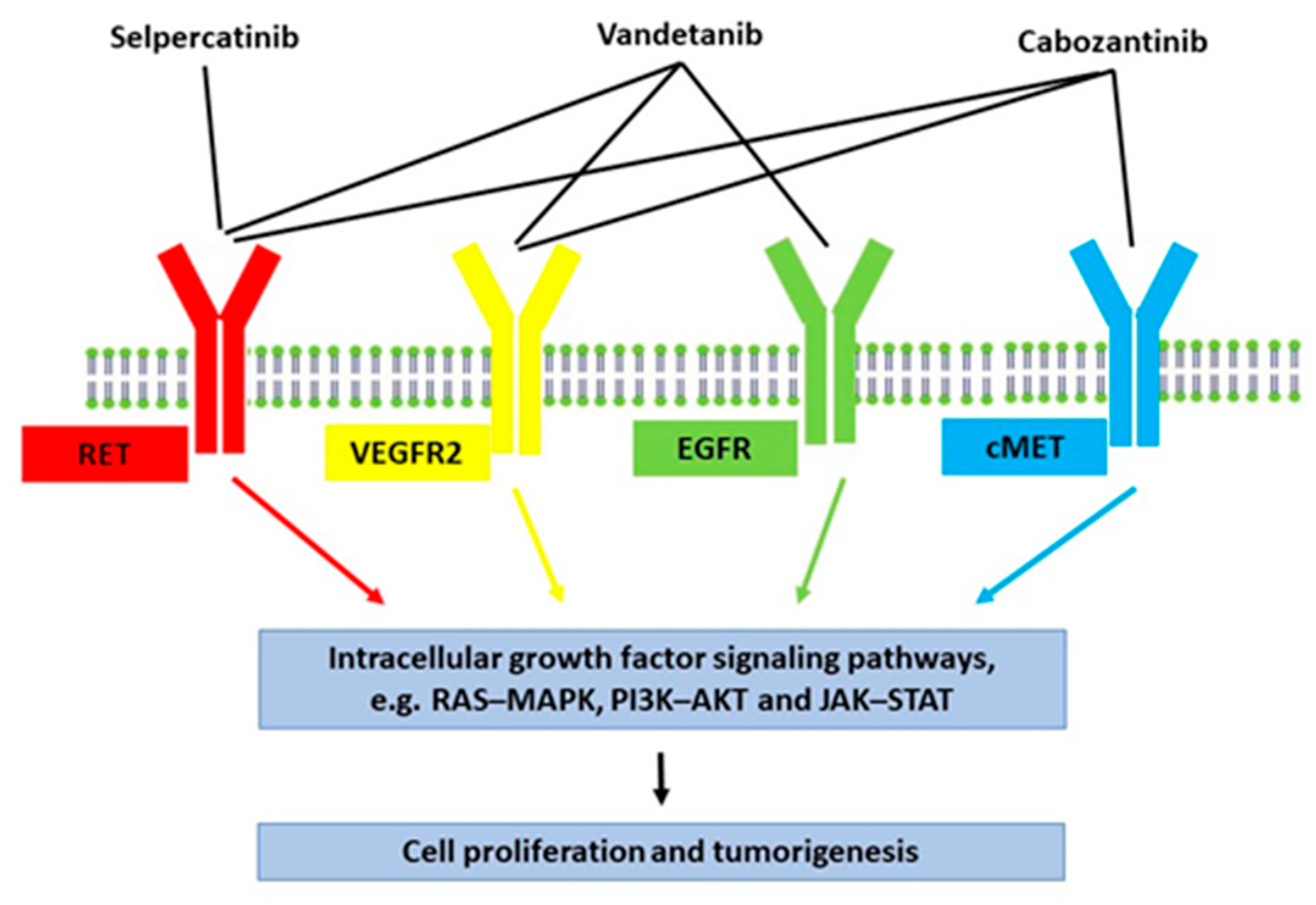