Classification of Pediatric Gangliogliomas Based on the Histological Infiltration

Ganglioglioma is a central nervous system (CNS) World Health Organization (WHO) grade 1 biphasic tumor that combines neoplastic glial and neuronal components [1]. It can affect patients of a wide range of ages but most commonly occurs in patients younger than 20 years, and it is the most common tumor associated with long-term epilepsy [2,3].
The essential morphological features to diagnose a ganglioglioma are low-grade intra-axial tumors with a combination of neoplastic neurons and glial cells. The definition of neoplastic neurons includes both dysmorphic/dysplastic neurons and neurons with near-normal morphology [1]. The glial component may resemble pilocytic astrocytoma, oligodendroglioma, and fibrillary astrocytoma [4]. This definition creates a broad spectrum of histological features that fulfill the diagnostic criteria of ganglioglioma.
Ganglioglioma is a relatively circumscribed tumor, but the literature has documented some cases with infiltrative growth patterns [1]. However, diffuse growth is not well defined, and when encountered, it creates doubt about the accuracy of the diagnosis. These cases may be diagnosed as diffuse glioneuronal tumors [5], and molecular alterations in some cases support ganglioglioma diagnosis [5]. The differential diagnosis of ganglioglioma with infiltration will include other forms of glioneuronal tumors and infiltrative gliomas depending on the appreciation of the neuronal component as a part of the tumor in the former or as a preexisting component in the latter.
The distinction of ganglioglioma from other glioneuronal tumors may have minor consequences, as most represent central nervous system (CNS) World Health Organization (WHO) grade 1 tumors. These tumors include dysembryoplastic neuroepithelial tumor (DNT) [5], polymorphous low-grade neuroepithelial tumor of the young (PLNTY) [6], and multinodular and vacuolating neuronal tumor (MNVT) [7]. However, the distinction from infiltrative glioma is essential, as these tumors will represent isocitrate dehydrogenase (IDH)-wild-type tumors, and the differential may include high-grade glioma.
This work aims to expand the morphological spectrum of gangliogliomas in children and clarify the histological diffuse/infiltrative variant of ganglioglioma.

The project proposal was approved by the Children’s Brain Tumor Network (CBTN) (https://cbttc.org, accessed on 1 July 2022). Consent from all patients was obtained per the CBTN protocol. The clinical and processed molecular data are available from PedcBioPortal (https://pedcbioportal.org, accessed on 1 July 2022). The dataset for this project was under the Open Pediatric Brain Tumor Atlas (OpenPBTA). The study group was all cases with the diagnosis of ganglioglioma under the histology section. The scanned pathology slides and the pathology report of selected cases in this group were available for me through the CAVATICA website (https://www.cavatica.org, accessed on 1 July 2022).
There were 50 samples from 46 patients under the histological diagnosis of ganglioglioma. The inclusion criteria were the histological diagnosis of ganglioglioma and the availability of scanned histological slides for evaluation. In addition, the following information was obtained from the clinical and genetic data: age, sex, location of the tumor, and significant genetic alterations.
The pathological features were obtained from the available pathological reports and the examination of the scanned images of the cases. The cases were divided into three groups depending on the final integrated diagnosis: (1) Specific entity other than ganglioglioma. (2) Ganglioglioma when the morphological and molecular alterations of the glioneuronal tumor do not suggest another entity. (3) Glial/glioneuronal tumor if another differential diagnosis cannot be excluded based on the morphological and molecular alterations.
Cases diagnosed with ganglioglioma were then categorized according to the infiltrative-look histologically into relatively circumscribed, infiltrative-looking, and combined. In addition, the following features were assessed in all cases: dysmorphic ganglion cells, eosinophilic granular bodies and Rosenthal fibers, the morphology of the glial component, and molecular alterations.
The infiltrative pattern was defined as the presence of neoplastic cells among the nonneoplastic brain parenchyma. Focal limited infiltration was accepted under the relatively well-circumscribed category. Dysmorphic ganglion cells were defined as ganglion cells with cytoplasmic enlargement, abnormal Nissl cytoplasmic distribution, abnormal neuronal clusters or orientation, and/or the presence of binucleated forms. The degree of dysmorphic ganglion cells was then categorized into those with near-normal neuronal morphology (score 1), scattered dysmorphic ganglion cells (score 2), and frequent dysmorphic ganglion cells (score 3). Finally, the glial component was categorized into pilocytic astrocytoma-like, oligodendroglioma-like, infiltrative astrocytoma-like, or nonspecific glial.

Fifty samples were available for the study, and forty samples from 37 patients met the inclusion criteria (Supplementary Table S1). The histological and molecular alterations were sufficient in seven cases (nine samples) to change the integrated diagnosis into another well-defined entity (Supplementary Table S1). These were IDH mutant astrocytoma, pilocytic astrocytoma (Figure 1a,b), diffuse astrocytoma, MYB-altered, infant-type hemispheric glioma (Figure 1c,d), CNS embryonal tumor, not elsewhere classified (NEC) (Figure 1e,f), MVNT, and PXA. The integrated diagnoses in the remaining cases were ganglioglioma (Supplementary Table S2) in 16 patients (17 samples), desmoplastic infantile ganglioglioma (DIG) in four cases (4 samples), and a low-grade glial/glioneuronal tumor in 10 patients (10 samples) Supplementary Table S3.
The 16 ganglioglioma cases were in nine females and seven males. The ages of patients ranged from 8 months to 19 years, with a mean of 9.9 years. The morphological features can be separated into three groups based on the circumscription of the tumor: infiltrative-looking tumors, relatively circumscribed tumors, and combined infiltrative and circumscribed areas.
In the first group (six samples from five cases), the infiltrative nature was mainly in the form of cortical involvement (Figure 2a–e). The cortical areas were involved with low to moderate cellular neoplasms formed by glial cells and dysmorphic ganglion cells. The infiltrative glial cells were arranged around the neurons and the blood vessels, resembling the pattern of infiltrative glioma. The glial background in this group was oligodendroglioma-like in three cases and nonspecific in three samples from two cases. Eosinophilic granular bodies (EGBs) were present in 3/6 samples (2/5 cases). The presence of frequent dysmorphic ganglion cells (score 3), except for Case 8, in these samples supported the diagnosis of ganglioglioma. Case 8 had near-normal appearing neurons. However, due to the location of the tumor in the temporal lobe and the presence of BRAF V600E, the integrated diagnosis was ganglioglioma. Case 12 had two samples. The first was taken at the age of 10.7 years and had KRAS Q61K and IDH R132H with a low allelic frequency (AF) of 0.16. The second specimen was taken at the age of 17 years and showed the KRAS Q61K mutation, while IDH mutation was not present. Given the frequent dysmorphic ganglion cells, the low IDH R132H AF, and the presence of KRAS mutation, the integrated diagnosis was considered ganglioglioma rather than IDH-mutant glioma.
The second group (six samples from six cases) was characterized by relatively well-defined nodules (Figure 3a–f). The nodule was formed by frequent dysmorphic ganglion cells and few glial cells. Most of the glial background in this group was pilocytic astrocytoma-like (three cases), while two cases had nonspecific glia and one had an oligodendroglioma-like pattern. EGBs were present in 5/6 cases; the last case had Rosenthal fibers.
The third group (five samples from five cases) showed both relatively circumscribed nodules and infiltrative-looking areas (Figure 4a–f). The glial background in this group was pilocytic astrocytoma-like in two cases, nonspecific glial in two cases, and oligodendroglioma-like in one case. EGBs were present in 2/5 cases. Case 19 had a pilocytic astrocytoma-like glial component and KIAA1549-BRAF fusion. However, the presence of frequent dysmorphic ganglion cells, the location of the tumor in the temporal lobe, and the lack of EGBs favored the diagnosis of ganglioglioma over pilocytic astrocytoma.
BRAF V600E was the most common alteration in ganglioglioma (6/17 cases) and was distributed among the different morphological groups: two cases in the first group, three cases in the second group, and a single case in the third group.
Four cases showed the morphological features of ganglioglioma but also had areas of desmoplasia, and the affected patients were younger than four years. The differential diagnosis in these cases included desmoplastic infantile ganglioglioma. Next-generation sequencing results were available in three cases, and all had BRAF V600E. The integrated diagnosis of DIG was favored in these cases.
In 10 cases, the morphological features and molecular alterations brought another differential diagnosis that could not be excluded from the available information. In these cases, the diagnosis of a low-grade glial/glioneuronal tumor is favored to reflect the uncertainty and difficulty of distinguishing ganglioglioma from its mimickers. The differential was infiltrative glioma in cases 28–31 (Figure 5a,b). In case 32, the histology was suggestive of angiocentric glioma (Figure 5c,d) but showed KRAS G12D. The histological features for the following cases suggest the diagnosis in brackets: Cases 33 and 34 (PLNTY, Figure 5e,f), Case 35 (MVNT), Case 36 (rosette-forming glioneuronal tumor (RFGNT)), and Case 37 (DNT). In a clinical setting with the availability of other details and immunostains, most of these cases could have been assigned a specific diagnosis.

In conclusion, this study confirmed/clarified the infiltrative/diffuse variant in ganglioglioma among the morphological spectrum of ganglioglioma. The high percentage of this pattern among the cases suggests that this pattern should be considered a classic for ganglioglioma. However, the possibility of diffuse glioma should be excluded before making this diagnosis. In case of doubt, molecular studies could be performed, and if not conclusive, a general terminology such as low-grade glial/glioneuronal tumor could be used.

Ethical review and approval were waived for this study due to that this study was performed by reviewing cases in an open database (Children’s Brain Tumor Network (CBTN) (https://cbttc.org, accessed on 1 July 2022)).

All available data are from subjects who consented to the CBTN protocol.

All relevant data files are available from the corresponding author (MA) upon request. 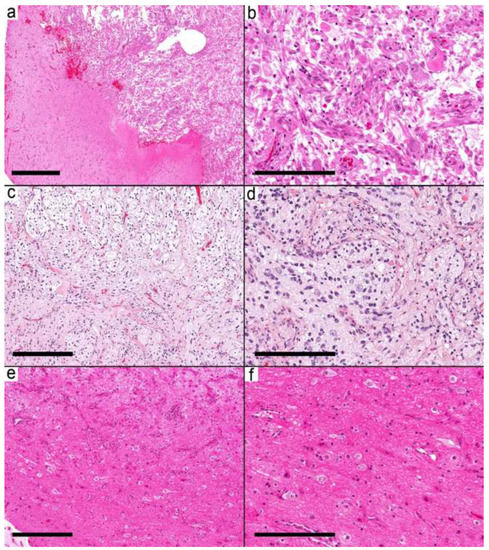 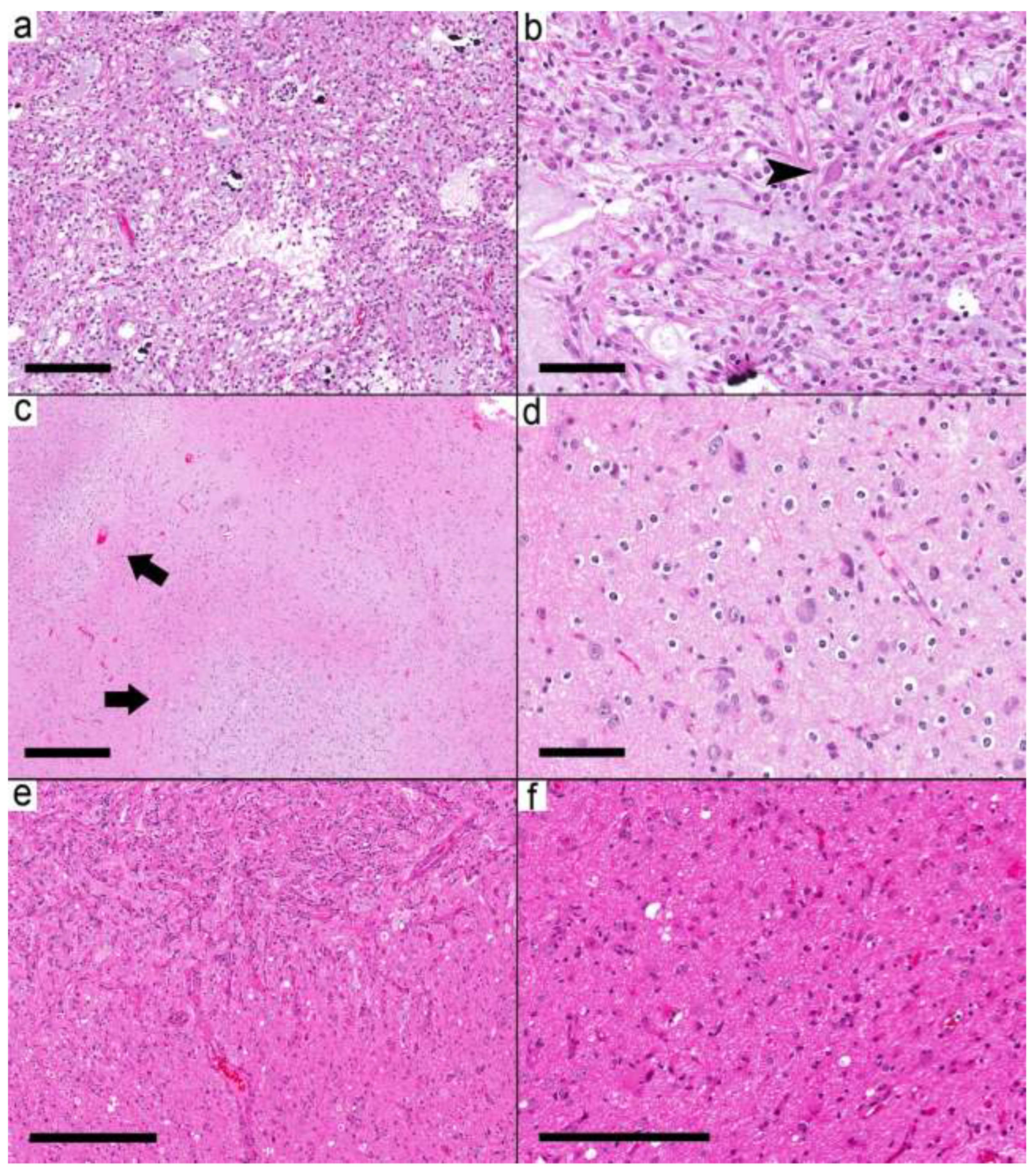 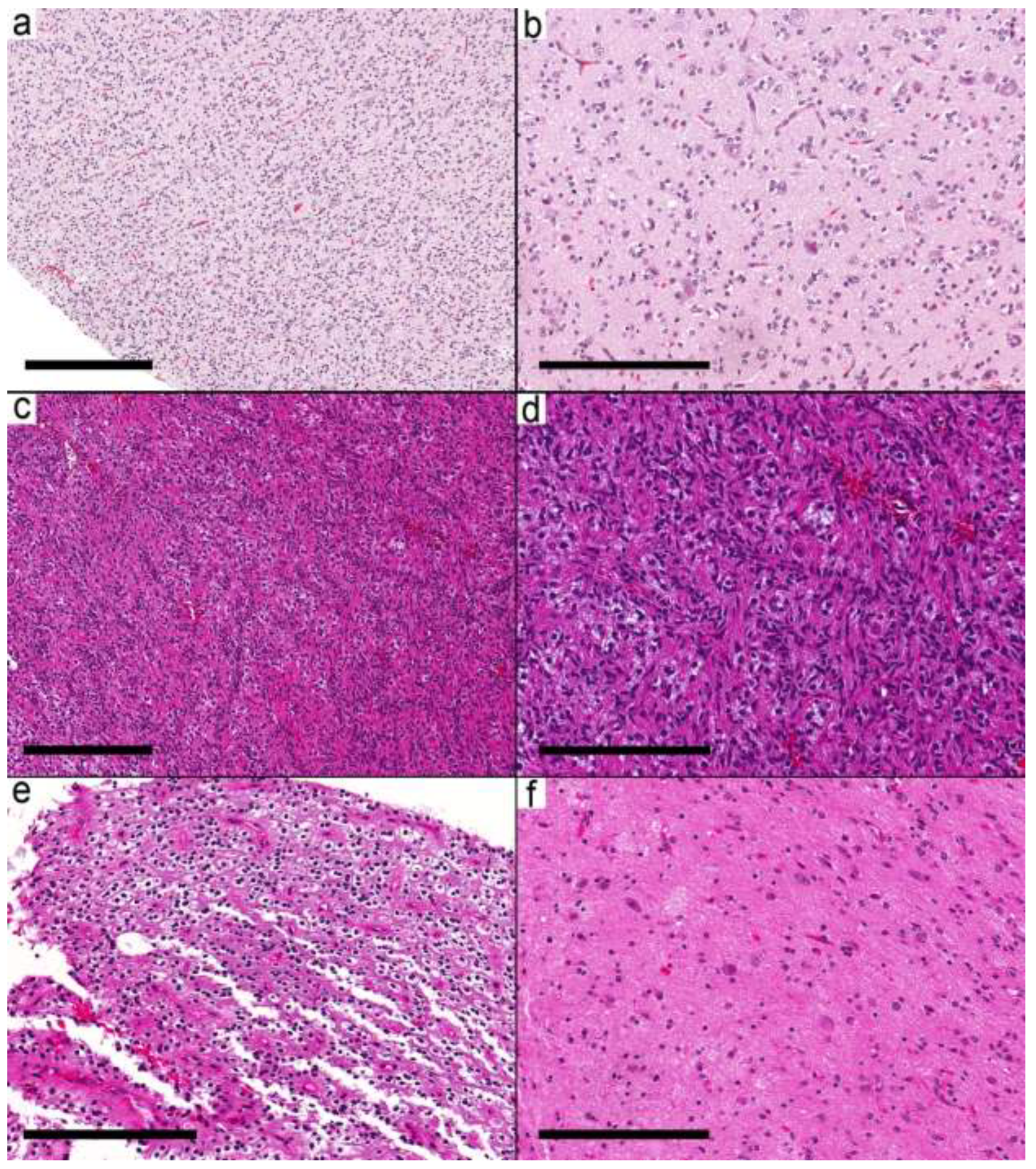