Reflecting on Palliative Care Integration in Canada: A Qualitative Report

Cancer stem cells (CSCs) are accountable for the progress of head and neck squamous cell carcinoma (HNSCC). This exploratory study evaluated the expression of molecular CSC markers in different tissues of HNSCC patients. Tissue specimens of primary tumor, lymph node metastases and macroscopically healthy mucosa of 12 consecutive HNSCC patients, that were treated with surgery and adjuvant radio(chemo)therapy upon indication, were collected. Samples were assessed for the expression of p16 as a surrogate for HPV-related disease and different molecular stem cell markers (ALDH1A1, BCL11B, BMI-1, and CD44). In the cohort, seven patients had HPV-related HNSCC; six thereof were oropharyngeal squamous cell carcinoma. While expression of BMI-1 and BCL11B was significantly lower in healthy mucosa than both tumor and lymph node metastasis, there were no differences between tumor and lymph node metastasis. In the HPV-positive sub-cohort, these differences remained significant for BMI-1. However, no significant differences in these three tissues were found for ALDH1A1 and CD44. In conclusion, this exploratory study shows that CSC markers BMI-1 and BCL11B discriminate between healthy and cancerous tissue, whereas ALDH1A1 and CD44 were expressed to a comparable extent in healthy mucosa and cancerous tissues.
Keywords: CSCs; histopathology; HNSCC; tumor; lymph node; mucosa CSCs; histopathology; HNSCC; tumor; lymph node; mucosa

Head and neck squamous cell carcinoma (HNSCC) is among the most prevalent cancers worldwide [1]. Risk factors include the consumption of tobacco, alcohol, and betel nut and exposure to human papillomavirus (HPV) [2]. Of the mentioned risk factors, high-risk HPV, e.g., HPV 16, 18, and 33, cause an increasing fraction of HNSCC incidence worldwide, and mortality is relatively constant in recent years [3,4,5]. In addition to TNM classification, resection margins status, extracapsular extension, and lymphovascular invasion, HPV status can predict survival probabilities in oropharyngeal squamous cell carcinoma, which eventually led to a new TNM classification system for p16-positive oropharyngeal carcinomas [6,7,8,9].
To overcome stagnation in the prognosis of HNSCC, research on the identification of prognostic markers and therapeutic targets is crucial and prominently called for [10]. Cancer stem cells (CSCs; also known as tumor-initiating cells) are considered important targets in this context. Though CSCs are believed to foster HNSCC progression and recurrence, representing a dormant cancer cell type, more resistant to non-surgical therapy such as radiotherapy and chemotherapy [11], their identification remains challenging [12].
In HNSCC, ALDH1 (Aldehyde dehydrogenase 1), BMI-1 (B-lymphoma Moloney murine leukemia virus insertion region-1), and CD44 belong to the most studied CSC markers and, additionally, BCL11B (B-cell lymphoma/leukemia 11B) was found to be a CSC marker in strong co-expression to BMI-1 [13,14,15]. ALDH1 is important for the maintenance of stemness and differentiation of stem cells [16]. BMI-1 plays a role in the self-renewal ability of stem cells, and high expression in cancer was related to epithelial-mesenchymal transition (EMT) and poor prognosis [13,17]. CD44 is a surface glycoprotein and common CSC marker in several human tumor entities [18] whose high expression was associated with a negative prognosis in oral cancer [19]. BCL11B is linked to both embryogenesis and tumor suppression [13,14]. In a previous study of this group, the correlation of CSC marker expression and prognosis of survival was studied. In a cohort of advanced-stage HNSCC patients treated with primary radio(chemo)therapy, CSC markers had a differential influence on survival, while HPV status had no significant influence. Of the CSC markers, BMI-1 and CD44 indicated a significantly worse prognosis on survival, while ALDH1 and BCL11B appear to have protective properties for HNSCC survival [20].
Moreover, targeting CSCs specifically in therapeutical approaches is highly challenging because potential molecular target sites bear risks of cross-reactions and toxicity. For example, the development of an anti-CD44 immunoconjugate for therapeutic use in patients with advanced HNSCC was terminated after the experimental treatment resulted in skin toxicity [21,22].
In an exploratory approach, we searched for differences in the expression of these CSC markers in primary tumor tissue, lymph node metastases, and healthy mucosa in patients with HNSCC.

In this single-center prospective exploratory study, we included 12 consecutive patients who were (a) diagnosed with head and neck squamous cell carcinoma, (b) treated with surgical tumor resection and neck dissection, (c) whose macroscopically healthy mucosa was biopsied after written informed consent, and (d) whose tumor and lymph node specimens were positive for squamous cell carcinoma.
Clinical data, including risk factors such as smoking and drinking habits and staging, were obtained from the patients’ medical records. Histologic samples were collected and analyzed as described below. Detailed patient characteristics are provided in Table 1. All data is displayed for the entire sample set regardless of the HPV status and separately for the HPV-distinct sub-cohorts.
All clinical samples were obtained with written informed consent during routine surgery or biopsy based on the approval by the ethics committee of the local medical faculty (Ethikkommission der Medizinischen Fakultät der Ludwig-Maximilians-Universität, IRB approval number 18-446) and in compliance with the WMA Declaration of Helsinki.

We obtained 8.0 mm diameter punch biopsies from the primary tumor after resection and macroscopically healthy mucosa. Healthy mucosa was taken beyond tumor-negative margins, proven by intraoperative frozen sections. One lymph node of the neck dissection specimen that was macroscopically suspicious of metastasis was taken. All specimens were embedded in tissue-tek (Sakura, Fintek, The Netherlands) and snap-frozen in liquid nitrogen before processing to 4 µm thick consecutive cryosections. Antigen expression was assessed in 3-4 tissue slides. P16 status as a surrogate marker of HPV infection will be referred to as HPV status in the following (p16-specific antibodies: cs56330, Santa Cruz Biotechnology) [23,24]. Immunohistochemistry (IHC) was performed using ALDH1A1-, BCL11B-, BMI-1-, and CD44-specific antibodies (ALDH1A1 1:100: ab9883, abcam, Cambridge, MA, USA; BCL11B 1:500: ab18465, abcam, Cambridge, MA, USA; BMI-1 1:100: ab14389, abcam, Cambridge, MA, USA; CD44 1:500: VP-C353, Vector Laboratories, Burlingame, CA, USA). The avidin-biotin-peroxidase complex method (Vectastain, Vector laboratories, Burlingame, CA, USA) was used according to the manufacturer’s protocol. Sections were incubated with the respective primary antibody for 1 h at room temperature (RT) followed by incubation with biotinylated anti-mouse immunoglobulins and then avidin-biotin-peroxidase complex (30 min at RT for each step). After each step, sections were washed with PBS. Specific peroxidase activity was visualized with 0.05% 3-amino-9-ethylcarbazol (Sigma, Deisenhofen, Germany) and 0.02% H2O2/0.1M Na-acetat buffer pH 5.5 as a substrate. Counterstaining was performed with hematoxylin. As a negative control, staining was performed with mouse pre-immune serum instead of specific antibodies.
As a histopathological reference regarding the immunoexpression of the markers in formalin-fixed, paraffin-embedded samples, we compared samples of this manuscript to the HNSCC tumor tissue micro assays of the Göttingen cohorts of our former manuscript [20]. For quality control reasons and to identify tumor infiltrates in the HNSCC and LN tissues, we performed hematoxylin/eosin stainings of the samples without the IHC markers as well as control stainings with mouse pre-immune serum and the IHC secondary antibodies alone instead of specific antibodies and secondary antibodies to exclude unspecific staining. No specific staining in the tumor tissue or mucosa was found in these controls.
In order to quantify and compare expression levels, immunohistochemistry scores (IHC scores) were applied to all staining. IHC scores represent the product of the percentages of positive cells, and the staining intensity scored from negative (0), low (1), intermediate (2), to strong (3). Thus, scores range from 0 to 300 and are referred to as H-scores as described before [25]. Four experienced examiners performed the analysis independently, and scores were consented.

Since results from the primary tumor, healthy mucosa, and lymph node metastasis of each individual patient are interconnected, IHC score data were analyzed by either one way repeated measures (RM) analysis of variance (ANOVA) with the Geisser–Greenhouse correction and Tukey’s multiple comparisons test for the entire sample set regardless of the HPV status or two way RM ANOVA with the Geisser-Greenhouse correction and Tukey’s multiple comparisons test separately for the HPV-distinct sub-cohorts. A p-value < 0.05 was considered statistically significant. All statistical procedures were conducted using GraphPad Prism 9.1.0 (GraphPad Software, San Diego, CA, USA).

All 12 patients in the cohort received surgical treatment with or without adjuvant radiotherapy. Seven patients had p16-positive HNSCC (hereafter referred to as HPV-positive or HPV+), and five patients had p16-negative HNSCC (hereafter referred to as HPV-negative or HPV−). Out of seven patients with HPV-positive HNSCC, six had oropharyngeal squamous cell carcinoma. Detailed patient characteristics, risk factors, and disease staging are shown in Table 1, as stated in the methods section.

3.3. Descriptive (Microscopical) Findings in the Staining for Molecular Markers of Interest

This exploratory study revealed no differential expression of CSC markers in primary tumors and lymph node metastases. While BMI-1 and BCL11B expression were higher in cancerous tissues than in healthy mucosa, no such differences were found for ALDH1 and CD44. These findings broaden the knowledge about CSC markers with respect to HNSCC. Most notably, BMI-1 and BCL11B might be utile in identifying CSCs in HNSCC IHC stainings.

All clinical samples were obtained with written informed consent during routine surgery or biopsy based on the approval by the ethics committee of the local medical faculty (Ethikkommission der Medizinischen Fakultät der Ludwig-Maximilians-Universität, IRB approval number 18-446) and in compliance with the WMA Declaration of Helsinki.

The data that support the findings of this study are available on request from the corresponding author. 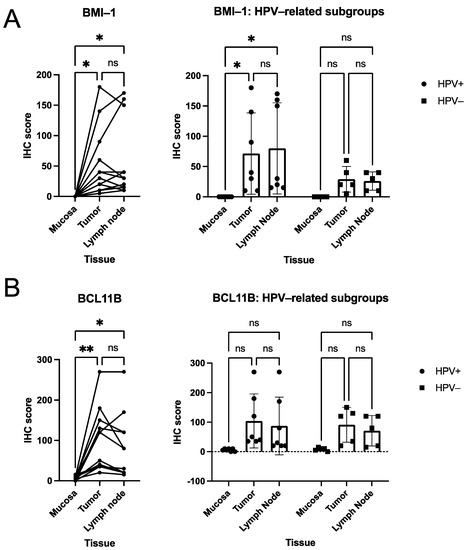 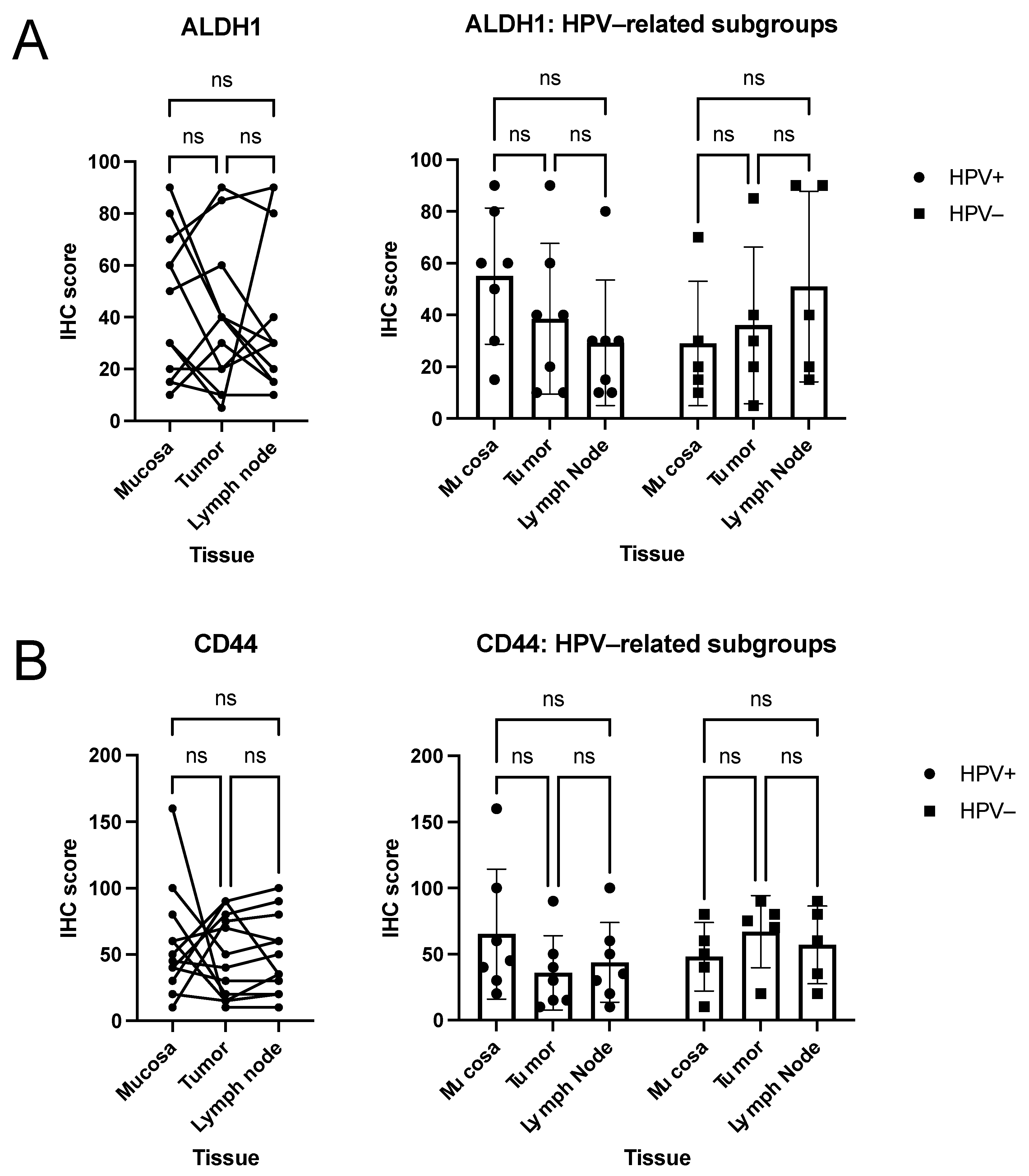