Anti-cancer therapies are a significant financial burden on both patients and healthcare systems. As the incidence of cancer continues to rise and new therapies are rapidly introduced, public drug plans with limited budgets continue to face difficult resource allocation decisions [1]. Assessing cancer drugs for public reimbursement recommendation is a complex evidence-based process. In Canada, the pan-Canadian Oncology Drug Review (pCODR), originally established in 2011 and now a part of the Canadian Agency of Drugs and Technologies in Health (CADTH), is a pan-Canadian cancer specific health technology assessment (HTA) process created to make funding recommendations to federal, territorial, and provincial drug plans (except for the province of Quebec) [2]. The pCODR Expert Review Committee (pERC) reviews submissions from drug manufacturers and makes non-binding recommendations, integrating the overall clinical benefit, patient perspectives, cost-effectiveness, and feasibility of adoption of the drug into the health system into their decision [3].
Because of limited healthcare resources, evidence of cost-effectiveness is a critical component of drug funding decisions [4]. Novel therapies are considered “dominant” and are preferred if they are less costly and more effective than the alternative [5]. However, in almost all cases, new treatments that are more effective than existing therapies are often costlier. When evaluating these “non-dominant” drugs, the calculated incremental cost-effectiveness ratios (ICERs) can be compared to a willingness-to-pay (WTP) threshold, commonly cited as being between $20,000–$100,000 CAD per quality-adjusted life year (QALY) in Canada, albeit potentially controversial and arbitrary [5,6,7]. A drug is considered cost-effective if its calculated ICER falls below the WTP threshold [6]. Unlike some other countries and HTA bodies, it should be noted that Canada and pERC have not adopted an explicit WTP threshold.
In the pCODR review process, the cost-effectiveness data used in pERC’s deliberations are delineated through a two-step submission process, as follows: manufacturers first submit their economic models to pCODR, specifying their best estimate of the drug’s ICER, ΔC, and ΔE. pCODR subsequently convenes an economic guidance panel (EGP), consisting of independent health economists or HTA-experienced panel members [3,8]. The EGP reanalyze the manufacturer’s model, revising components contributing to potential uncertainties and limitations. The revision process allows the EGP to calculate their best upper and lower estimates of ICERs, incremental cost (ΔC), and incremental effectiveness (ΔE). Manufacturers are permitted to review and provide feedback on the economic guidance reports prior to pERC making its final funding recommendation [3].
Previous studies have examined the methodological issues in manufacturer submitted economic models to pCODR, the components commonly revised by the EGP, and their potential correlation with final pERC recommendations [9,10,11]. Masucci et al. described the most frequent methodological issues identified and revised by EGPs, which involved costing (59%), time horizon (56%), and model structure (36%) [11]. None of these issues, however, had a statistically significant relationship with the pERC’s final recommendations [11]. The final recommendations are more dependent on clinical evidence and patient values, while subsequent pricing negotiations may be more dependent on cost-effectiveness [7]. Two other studies evaluating methodological issues in manufacturer-submitted economic models found that the most common revision by the EGP was the shortening of the time horizon [9,10].
Identifying the recurring problems faced by economic models submitted to HTA review committees is an important step in the development of more suitable models in the future. While previous studies have examined some of these methodological issues, to our knowledge, a direct comparison of manufacturer-calculated and independently reanalyzed ICERs has not been formally conducted in the Canadian context. Therefore, in this study, we investigate if manufacturer-submitted economic models are generating ICERs that are more optimistic in comparison with pCODR-generated ICERs. The objectives of this study are to determine the magnitude of difference between manufacturer and pCODR ICERs, ΔC, and ΔE; to examine whether there is a significant difference in the proportion of ICERs deemed to be cost-effective; and to evaluate the trends in the ICERs over time. To further explore why manufacturer-submitted and EGP-reanalyzed ICERs may differ, we also present more recent data on the common methodological issues revised by the EGP.

All drug indications submitted from 13 July 2011, when pCODR first started accepting submissions, to 1 November 2018, were identified from the publicly available pCODR database [12]. Indications with a final economic guidance report that stated both the manufacturer ICER/ΔC/ΔE and the EGP’s lower and upper estimates for ICER/ΔC/ΔE were included. For duplicate entries due to a resubmission, the most recent submission was included. Indications with redacted or unreported ICERs, ΔC, or ΔE for either the manufacturer or EGP reanalysis were excluded. Submitted indications that did not report point estimates but only a range in the manufacturer-submitted ICER, ΔC, or ΔE were excluded. Indications where both the manufacturer and the EGP considered a drug as “dominant”, regardless of if ΔC or ΔE were reported, were included. If only one economic model deemed the drug as “dominant”, the other must have provided an ICER to be included in this analysis. In cases where there were multiple indications in a single review or more than one ICER for a single indication due to multiple comparators, the most appropriate comparator (as per the pCODR final clinical guidance reports, which reflect the most relevant Canadian comparator) was extracted, as pCODR only provides upper and lower estimates for this most relevant comparator.

For each drug review, two reviewers (T.J. and R.S.) independently extracted the generic drug name, pCODR number, indication, route of administration, comparator drug, pERC final recommendation (positive, positive with conditions, or negative), date of final recommendation, manufacturer-submitted economic values reported as point estimates (ICER, ΔC, and ΔE), and EGP’s lower and upper estimates (ICER, ΔC, and ΔE). Methodological issues were identified by examining final economic guidance reports, and recurring issues were grouped into categories based on theme and whether the issue was revised by EGP during reanalysis. To ensure accuracy, all data extractions were compared between the two reviewers, with disagreements being resolved through discussion with a third reviewer (K.C.).

Key data from included drug reviews, including the ICER, ΔC, and ΔE values, were summarized using descriptive statistics. Cumulative distribution plots were constructed to compare the manufacturer-submitted economic values with both the lower and upper EGP reanalyzed estimates. The absolute differences in ICERs were calculated by subtracting the manufacturer-submitted value from the EGP reanalyzed estimates; therefore, a positive difference indicated that the manufacturer’s ICERs were lower and more optimistic. The proportion of drug reviews considered to be cost-effective at varying willingness-to-pay (WTP) thresholds (from 50,000 to 150,000 $/QALY) by the manufacturer and EGP reanalyzed models were also calculated. As Canada does not endorse an explicit societal WTP threshold, a range was used in this analysis based on the World Health Organization’s suggestion of one to three times gross domestic product per capita [13]. ICERs that fell below the WTP threshold were considered cost-effective. Generalized linear regression models with Gamma distribution and log link were used to examine the changes in ICERs over time from 2012 to 2018, as costs have non-negative values and are right-skewed [14,15]. Lastly, methodological issues with manufacturer submissions that lead to discrepancies between manufacturer-submitted and EGP reanalyzed estimates were extracted from the economic guidance reports and were tallied. The percentage of these issues that were revised by the EGP prior to making their recommendations were also calculated. All statistical analyses were performed using R (version 3.2.0, R Foundation for Statistical Computing, Vienna, Austria).

Overall, 73 unique indications were included in this analysis, from 149 submissions initially identified from pCODR (Figure 1). No indications from 2011 were eligible for inclusion. The included indications covered a variety of cancer types, with the most common being leukemia (16%), lung cancer (14%), and gastrointestinal (14%) cancer. The characteristics of the included indications are summarized in Table 1 and Supplementary Tables S1 and S2.

From 2012 to 2018, a trend towards decreasing manufacturer-reported ICERs over time was observed, but this was not statistically significant (p = 0.78; Supplementary Figure S2). In the EGP re-analyses, EGP low estimate ICERs did not significantly increase over time (p = 0.94), while ICERs in the EGP high re-analyses increased significantly by 19% annually (p < 0.05; Supplementary Figure S2). Both the manufacturer-submitted and EGP low estimate data suggest a maintenance of ICERs over time. However, EGP high estimate data show a potential worsening of cost-effectiveness with increasing ICERs over time.

Issues identified with the manufacturer-submitted models were grouped into 10 thematic categories (Figure 5). The two most common issues identified in these models were related to time horizon (50 indications), where the manufacturer chose a time frame that was considered too long for the estimate of the maximum survival of patients, and utility estimates (36 indications) where alternative sources, values, or assumptions were made in the re-analysis. Time horizon was also the most common methodological issue revised by the EGP (lifetime time horizon for 49 of the 50 indications was shortened). This was followed by “other cost estimates” that includes all costs (i.e., treatment, testing, and administrative costs) not pertaining to drug wastage, which refers to the wastage of medications, for instance from discarding leftover intravenous drugs in partially-used vials. Two issues that were identified by EGP but not commonly revised/re-analyzed pertained to “uncertainty with comparisons” and “model structure”. Uncertainty due to an indirect comparison, for instance lack of homogeneity or consistency in the trials used for indirect comparison, was present in 10 indications, with the EGP revising four indications by using a different comparator. Model structure issues, such as bias while using partitioned survival models that require significant extrapolation, were identified in five, but only revised in two indications. Other less common issues included estimation of the treatment benefit duration, which refers to the length of time the drug is expected to provide benefit, including in some cases a post-progression benefit, which was not clinically supported. Extrapolation issues referred to concerns with the statistical techniques used for extrapolation, such as improper survival curve fitting using inappropriate distributions for the clinical data. 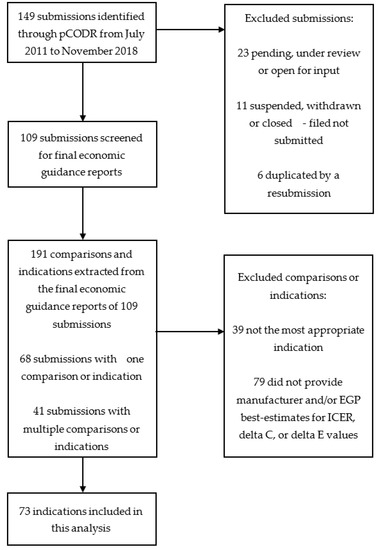 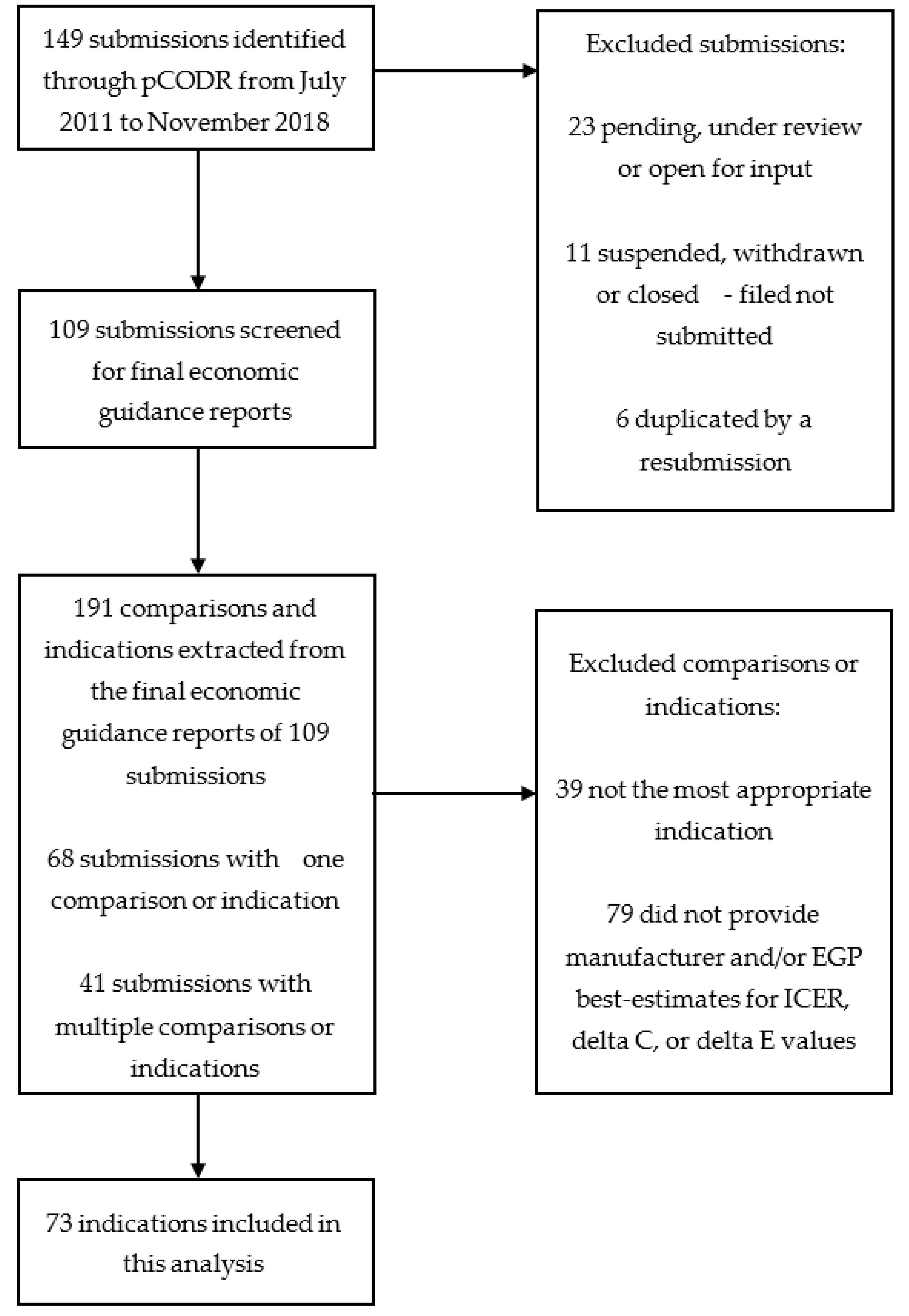 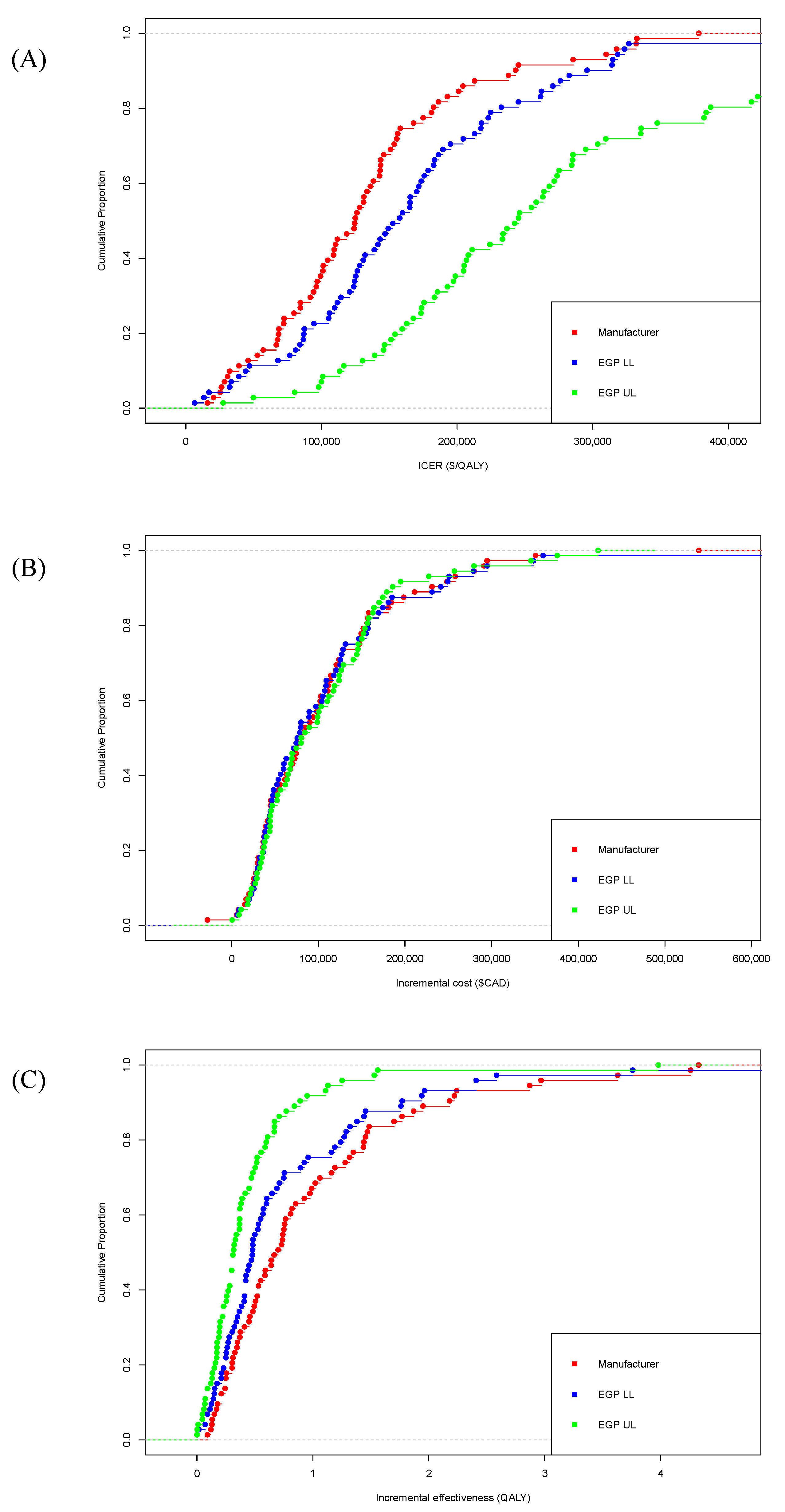 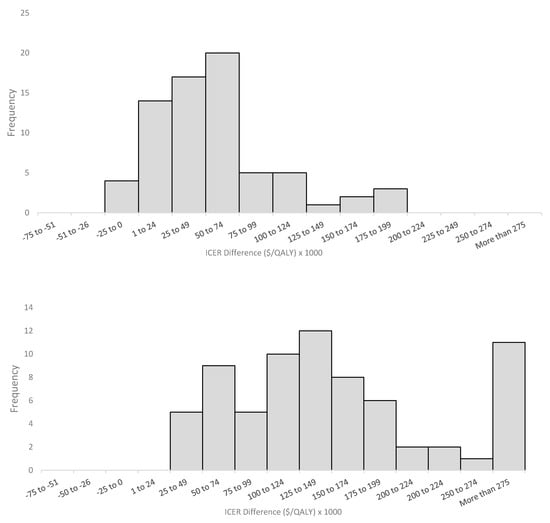 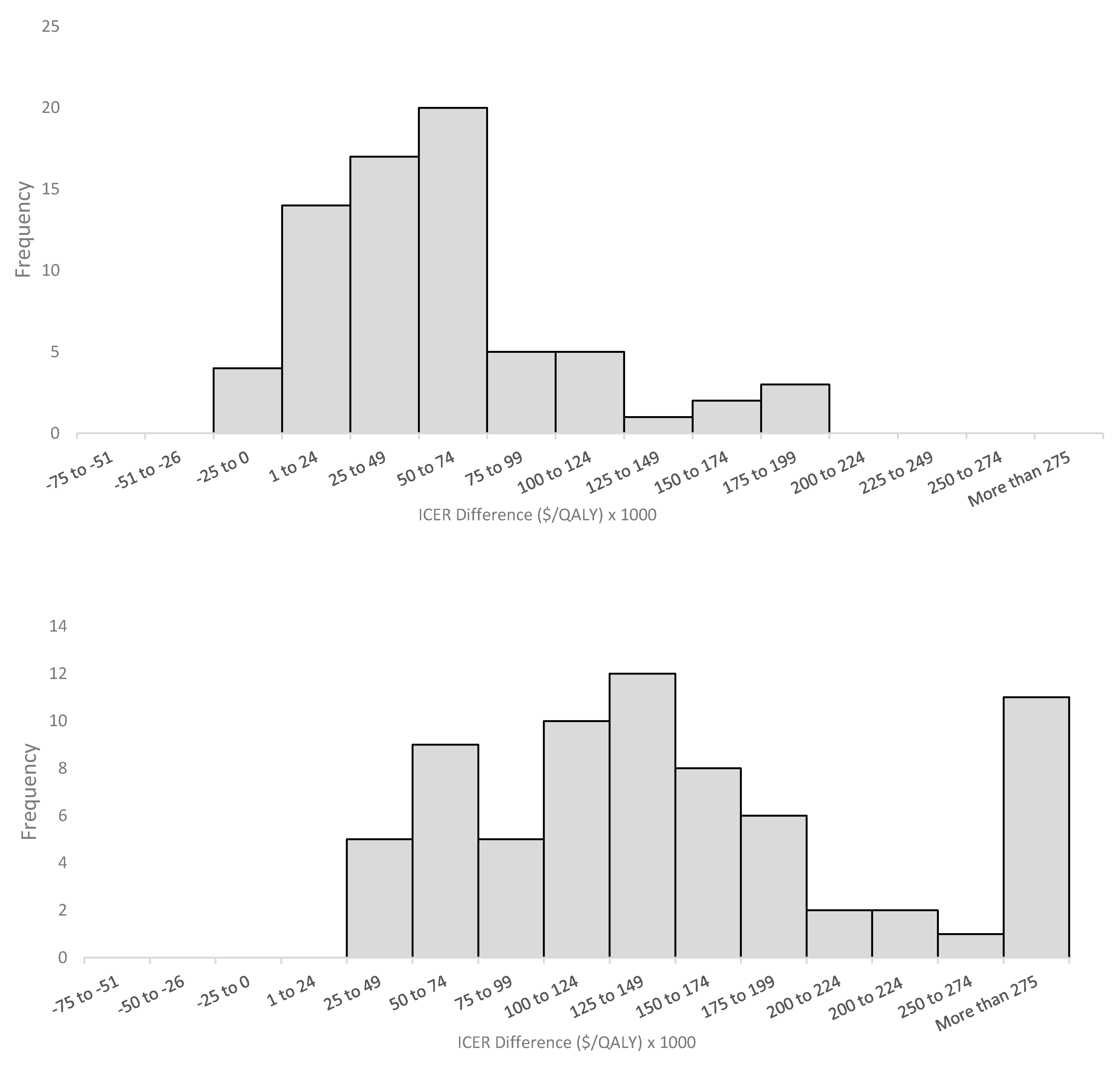 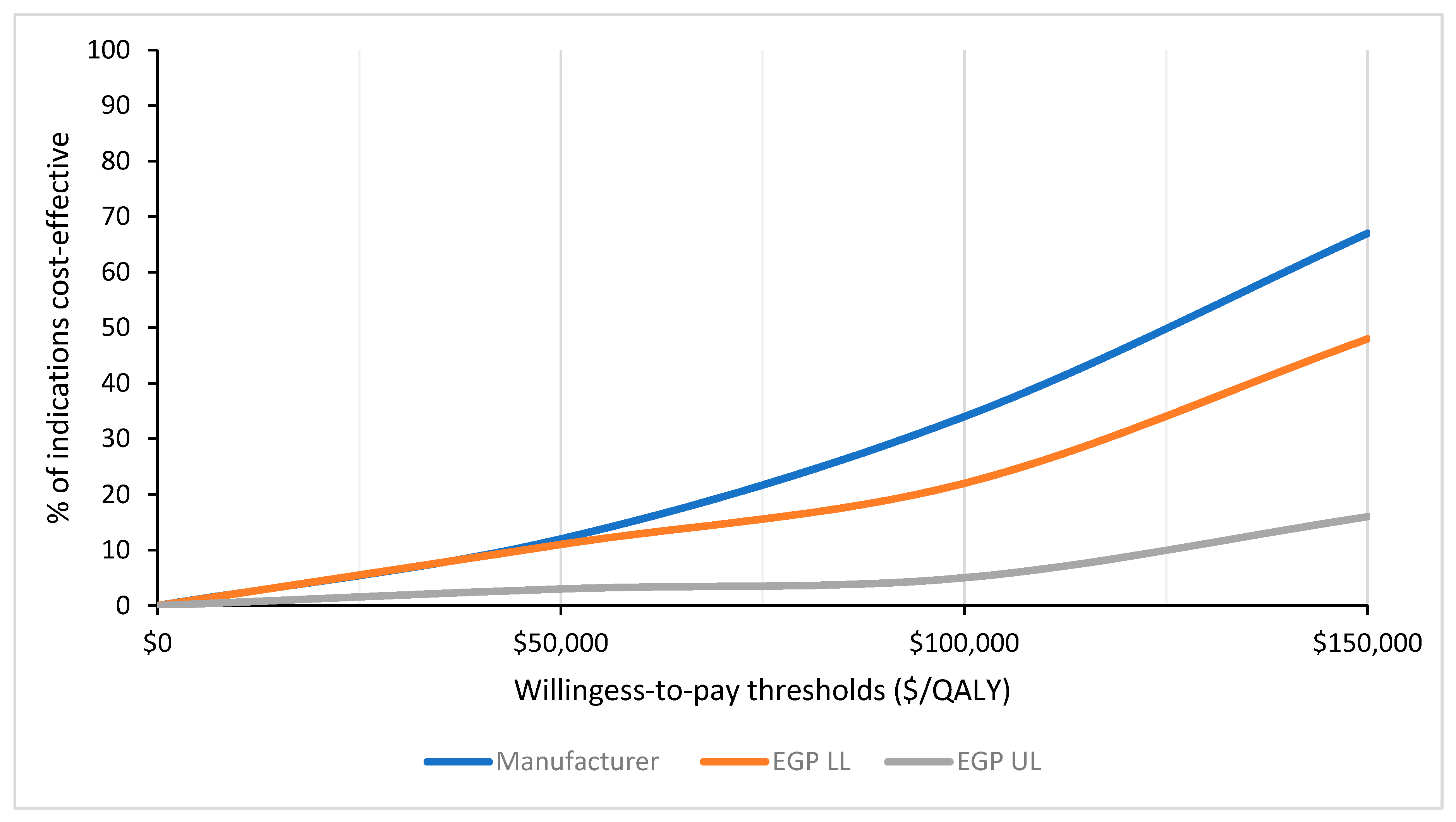 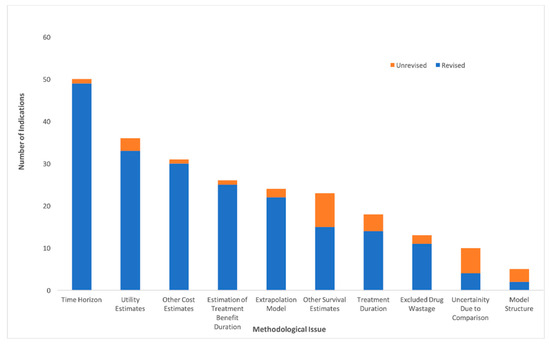 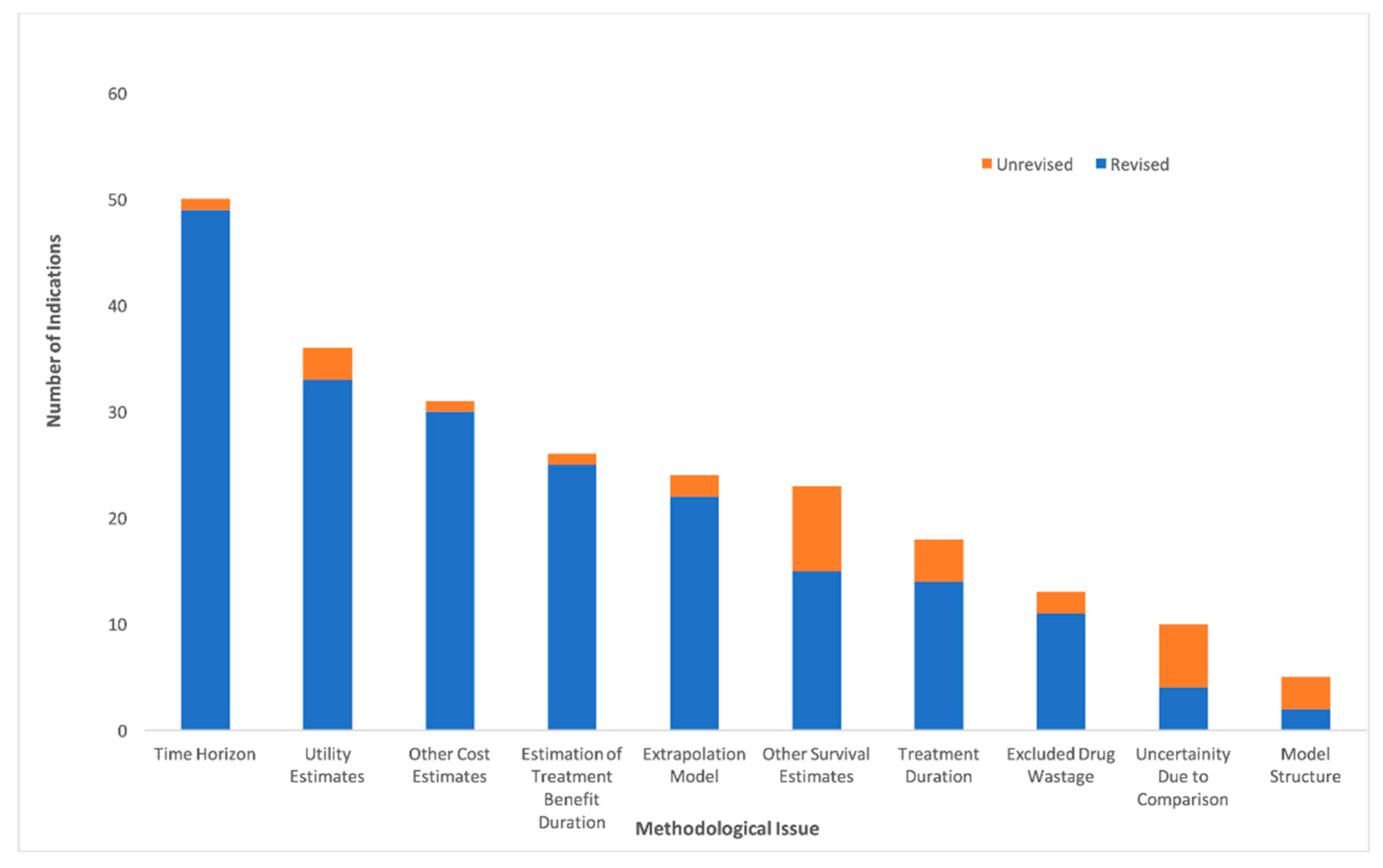 Table 1. Key characteristics of the included submissions.
Table 1. Key characteristics of the included submissions.
pERC = pCODR Expert Review Committee.
© 2021 by the authors. Licensee MDPI, Basel, Switzerland. This article is an open access article distributed under the terms and conditions of the Creative Commons Attribution (CC BY) license (http://creativecommons.org/licenses/by/4.0/).
We use cookies on our website to ensure you get the best experience. Read more about our cookies here.
Accept
We have just recently launched a new version of our website. Help us to further improve by taking part in this short 5 minute survey here. here.
Never show this again