Isoprostanes-Biomarkers of Lipid Peroxidation: Their Utility in Evaluating Oxidative Stress and Analysis

Toxic Metals (Pb and Cd) and Their Respective Antagonists (Ca and Zn) in Infant Formulas and Milk Marketed in Brasilia, Brazil

:
In non-ideal scenarios involving partial or non-breastfeeding, cow’s milk-based dairy products are mainstream in infant feeding. Therefore, it is important to study the concentrations of potentially neurotoxic contaminants (Pb and Cd) and their respective counteracting elements (Ca and Zn) in infant dairy products. Fifty-five brands of infant formulas and milk sold in Brasilia, Brazil were analyzed. The dairy products came from areas in the central-west (26%), southeast (29%) and south of Brazil (36%) extending as far as Argentina (7%) and the Netherlands (2%). For toxic Pb and Cd, median concentrations in powdered samples were 0.109 mg/kg and 0.033 mg/kg, respectively; in fluid samples median Pb concentration was 0.084 mg/kg, but median Cd concentration was below the limit of detection and overall values were below reference safety levels. However, 62% of these samples presented higher Pb concentration values than those established by FAO/WHO. Although the inverse correlation between Cd and Zn (Spearman r = −0.116; P = 0.590) was not statistically significant, the positive correlation between Ca and Pb was (Spearman r = 0.619; P < 0.0001). Additionally, there was a significant correlation between Pb and Cd. Furthermore, the study also revealed that provision of the essential trace element Zn in infant formulas can provide adequate amounts of the recommended daily requirements. Infant formulas and milk sold for consumption by infants and children can be an efficient tool to monitor neurotoxic metal risk exposure among young children.
Keywords:
cadmium; calcium; formulas; infant nutrition; lead; milk; zinc

Breastfeeding is necessary for optimal growth and development of infants. There are innumerable and unique health and neurodevelopment advantages to short and long-term breastfeeding. Nevertheless partial and non-breastfeeding take place worldwide. The occurrence of necessary essential nutrients and micronutrients in cow’s milk has made it the alternative food of choice for the human infant. In such non-ideal circumstances infant feeding practices have relied on technical advances in the food industry to improve upon mainstream cow milk-based products. In this realistic scenario, it should be recognized that pasture and animal foodstuffs [1] can be contaminated with pollutants and, as a consequence, increase the risk of the non-breastfed infant being exposed to hazardous substances.
Grazing land can be contaminated with Pb and Cd from parent materials, atmospheric deposits, continuous application of large amounts of fertilizer, disposal of industrial waste sludge and vehicle emissions [2]. In addition to that, packaging and technological processes used to bring foods to the consumer can significantly increase the total concentration of Pb and Cd [3,4]. Therefore, potentially toxic elements (Cd, Pb) deriving from environmental pollution or accidental contamination may be transferred to cow’s milk and consumed by vulnerable infants.
Intake of contaminated milk containing low levels of Cd and Pb can cause various clinical abnormalities or may pass without clinical signs [5]. However, studies have shown that dietary intake of selected nutritional elements might help counteract the effects of cadmium and lead. Animal studies showed that the amount of calcium in food is related to tissue lead accumulation [6–9]. Indeed, epidemiological studies have shown that food calcium content is inversely correlated with lead in blood, bone or hair [10–12]. Recently, rates of absorption and whole-body retention of dietary Cd were increased 7 to 10-fold when experimental animals were fed diets containing marginal concentrations of Zn, Fe, and/or Ca [13,14]. Therefore, our objective was to assess the occurrence of toxic cadmium and lead along with the natural nutritional elements (zinc and calcium) in cow’s milk and infant formulas sold in Brasília, Brazil.

The laboratory glassware was kept in a 5 or 20% (v/v) nitric acid solution overnight. Afterwards, it was rinsed thoroughly with ultrapure water and air-dried. Milk samples were prepared to carry out the voltammetric and spectroscopic analyses using the optimized procedure as described.
An aliquot of each milk sample (0.4 g for powered samples and 1.0 mL for liquid samples) was weighed into a Teflon digestion vessel. Afterwards, 65% nitric acid (5.0 mL) and 30% hydrogen peroxide (2.5 mL) were added and samples subjected to closed vessel microwave digestion. The optimized microwave digestion program was performed at 350 W (8 min), 550 W (8 min), 700 W (7 min), 0 W (6 min) and 850 W (5 min). At the end of the digestion process, the digests were diluted to 25 mL with double-distilled water quality for the measurement of Zn, Ca, Pb and Cd.
The measurement of Zn, Cd an Pb in milk samples was accomplished through multiple standard additions of 100 μL of 1.00 × 10−4 mol L−1 Zn2+, 300 μL of 1.00 × 10−5 mol L−1 Cd2+ and 300 μL of 1.00 × 10−5 mol L−1 Pb2+ to the electrochemical cell containing 20 mL of 0.2 mol L−1 sodium acetate and 1.0 mL of pretreated milk sample. To avoid measurement interference due to metal adsorption on the working surfaces of the electrode system, electrodes were submitted to periodic cleaning with 20% HNO3 (by volume) followed by a generous wash with ultrapure water. Experiments were performed in three replicates at 23 °C and pH 4.0, and preceded by a gentle N2 bubbling to prevent oxygen diffusion into the electrochemical cell (10 min for the supporting electrolyte and 1 min after metal addition).
The determination of calcium levels was carried out using multiple standard additions in milk samples. Five solutions containing 1.0 mL of pretreated milk sample in each were prepared by additions of 0, 50, 100, 150 and 200 μL of 1.00 × 10−3 mol L−1 Ca2+ for a 50 mL final volume. In all samples the measurements were done in three replicates.
Nine parameters have been evaluated for the validation of analytical methods in milk, namely: selectivity, repeatability, reproducibility, linearity range, detection and quantification limits, recovery, stability and control charts. The limits of detection and quantification, and linearity range of Zn, Cd, Ca and Pb were determined using analytical curves constructed by multiple standard additions. The analyte stability was characterized by analyzing a pretreated infant formula (L5) sample once a week during eight weeks. The trueness of the analytical methods was assessed by recovery assays. Known amounts of Zn, Cd, Pd and Ca were added to three infant formulas (L1 = 5.700 mg/g Ca; 0.0627 mg/g Zn; 0.4000 mg/kg Cd; 0.0037 mg/g Pb; L2 = 4.300 mg/g Ca; 0.0052 mg/g Zn; 0.400 mg/kg Cd; 0.0027 mg/g Pb; L3=5.700 mg/g Ca; 0.0051 mg/g Zn; 0.4 mg/kg Cd; 0.0016 mg/g Pb). The repeatability was determined by analyzing a pretreated infant formula (L5) sample five times in the same day. The reproducibility was determined by analyzing a pretreated infant formula (L5) sample eight times in different days (one time per week). The selectivity was evaluated by comparing the slopes of the analytical curves obtained with aqueous standards and with standard additions to a pretreated infant formula (L5) sample. The control charts (R vs. time) were constructed based on stability data, where R is the difference between the lower and higher replicate values in each week.

Commercialized infant formulas and milk consumed by children can be an efficient tool to monitor environmental contamination and risk of children’s exposure to neurotoxic metal (Cd and Pb). Health regulators and manufacturers of milk formulas can take advantage of these findings to abate Pb exposure in vulnerable infants.

We thank the CNPq, CAPES, and EMBRAPA for student grants and financial support. 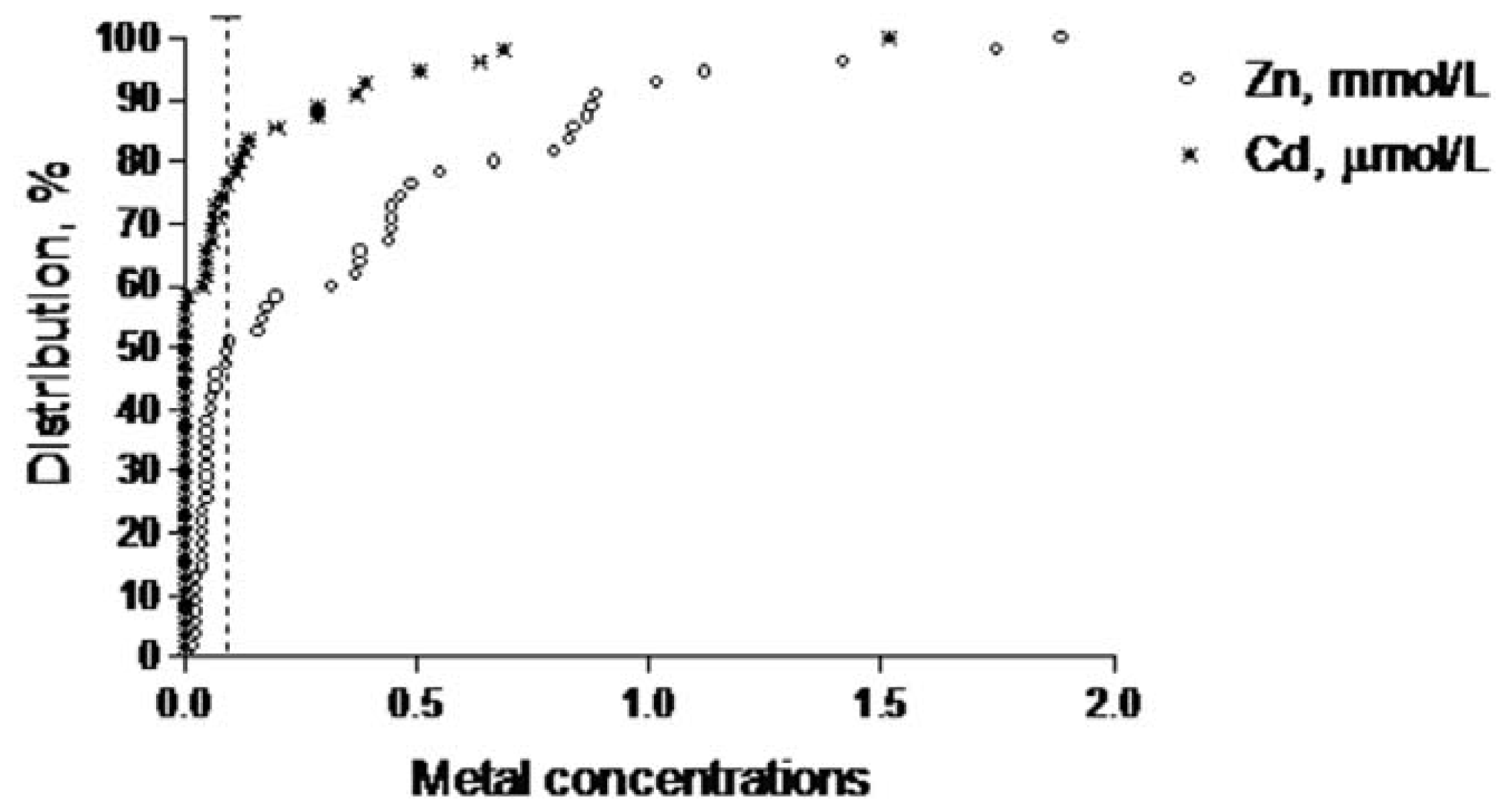 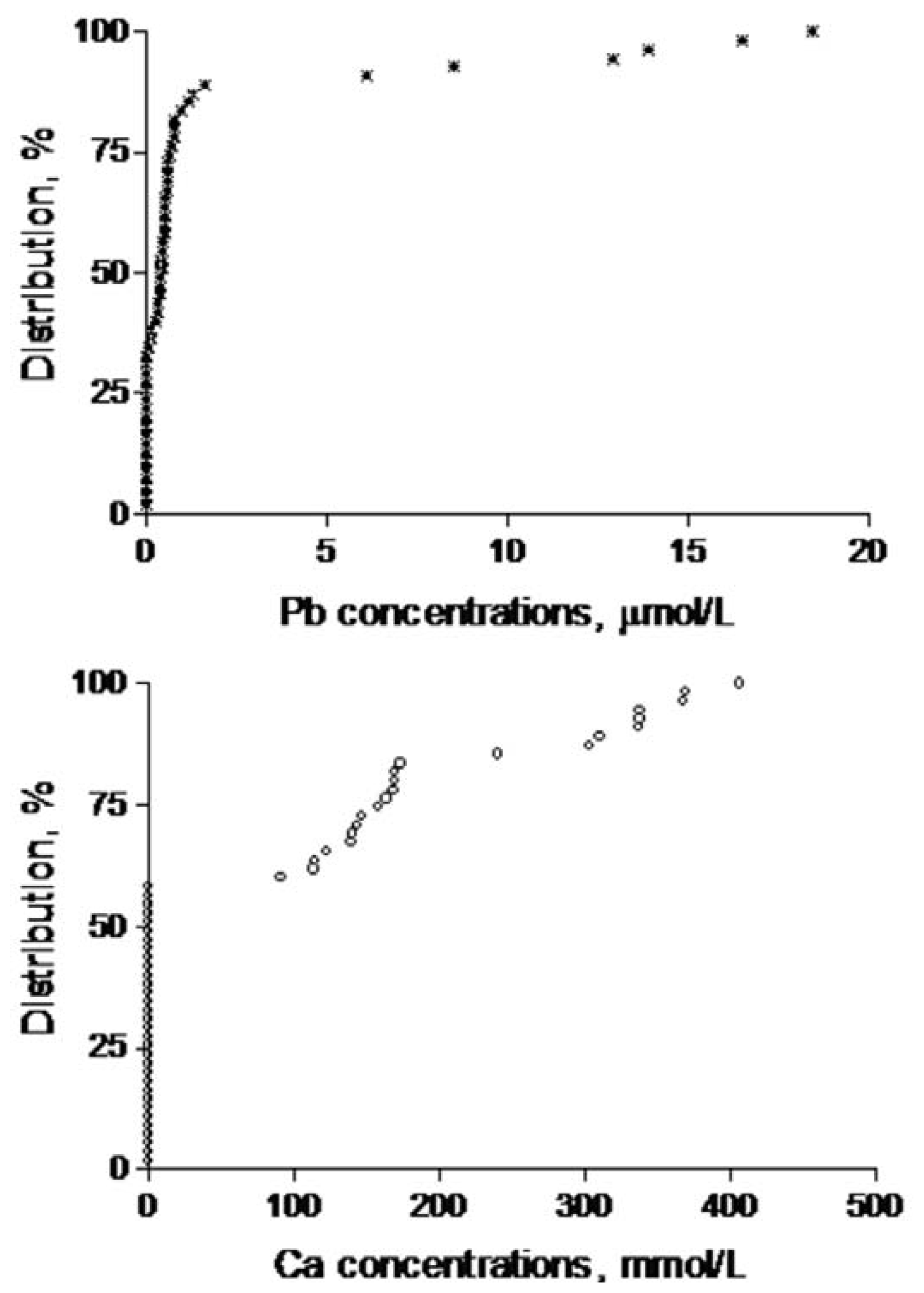 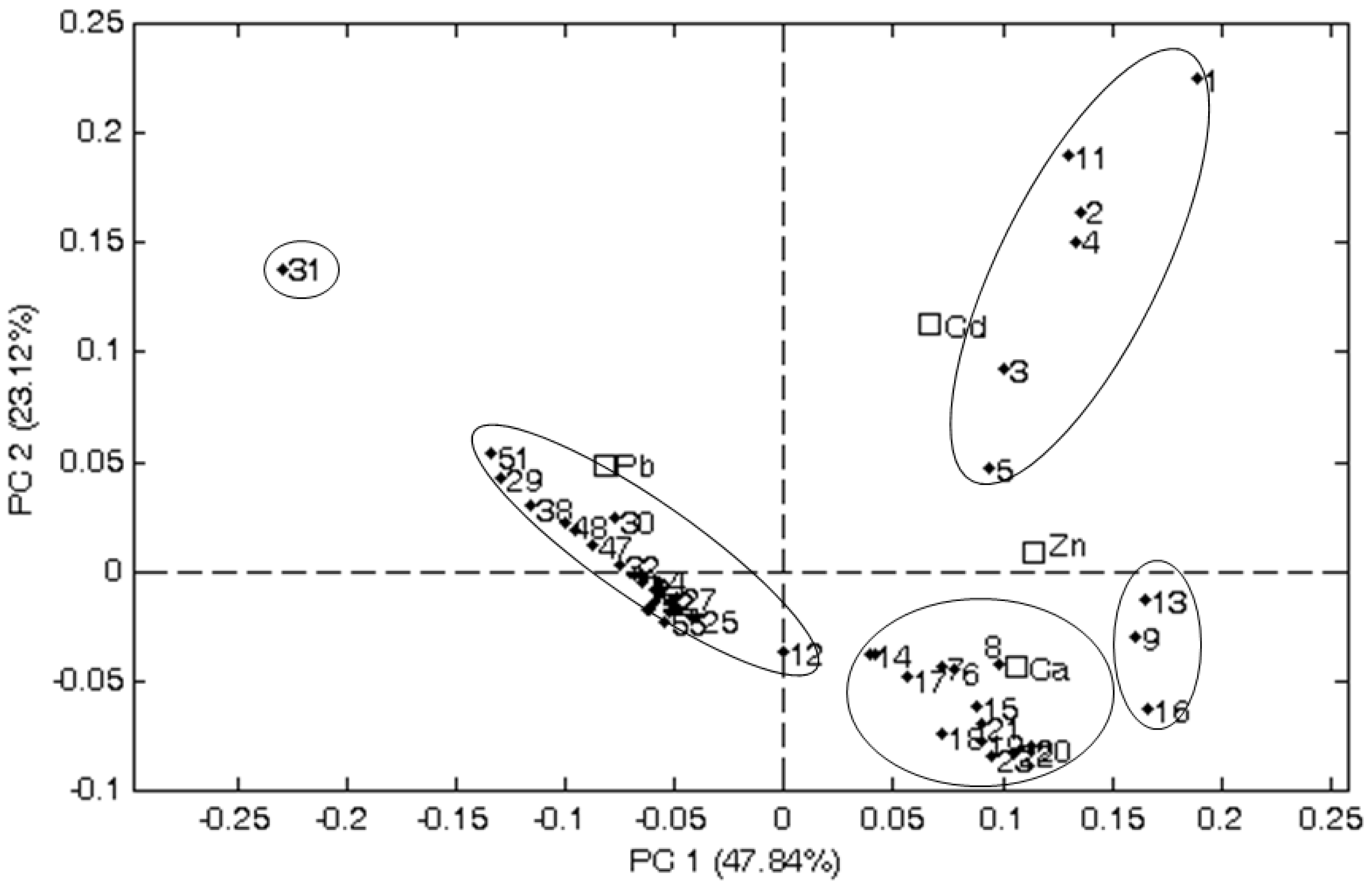