The Order of Draw during Blood Collection: A Systematic Literature Review
Previous Article in Special Issue

Impact on Health-Related Quality of Life after Different Aerobic Exercise Programs in Physically Inactive Adults with Overweight/Obesity and Primary Hypertension: Data from the EXERDIET-HTA Study

As people age, the risk of disease increases and deterioration becomes more noticeable. These changes can increase the risk of cognitive impairment, with negative consequences for the quality of life and the ability to perform activities of daily living (ADLs) in older people, which translate into greater dependence and loss of wellness. This study aimed to determine the impact and effectiveness of the use of the Wii® game console (Nintendo Company Limited, Kyoto, Japan) on improving performance of basic and instrumental ADLs, as well as its relationship with cognitive impairment levels and mood in institutionalized older people. A longitudinal study was designed, whose study population consisted of people over 75 years of age who lived in a nursing-home or attended a day care center (n = 80; 45 women). Cognitive status was assessed using Lobo’s Mini-Cognitive Examination (MCE) and Global Deterioration Scale (FAST-GDS), while the psychological assessment used the Dementia Apathy Interview and Rating (DAIR), Yesavage scale for Geriatric Depression (EGD-15), and Goldberg Anxiety and Depression Scale (EADG). Differences from T1 to T2 in the control group (control; n = 40; 23 women; 83.25 ± 8.78 years; 76.35 ± 13.54 kg) and in the experimental group (Wii; n = 40; 22 women; 85.05 ± 8.63 years; 74.60 ± 13.01 kg) were evaluated using a paired Student’s t-test or Wilcoxon’s signed rank test, and a two-way repeated measures analysis of variance (ANOVA) test. Differences in Δ (%) and other tests at T1 and T2 were compared using the independent t-test or Mann–Whitney U test, with the treatment category as a fixed factor. The results showed that the Wii® video console had a positive influence for older people, increasing cognitive status and levels of ADLs, and psychological status. In addition, a positive correlation between performance of ADLs and cognitive status was observed, as well as a negative correlation with the psychological status. Through a rehabilitation program with a Wii® game console in the elderly, depression, anxiety and apathy levels were reduced, accompanied by an increase in memory and attention, as well as in performance of basic and instrumental ADLs. View Full-Text
Keywords: memory; attention; apathy; depression; anxiety; Wii; elderly; Spain memory; attention; apathy; depression; anxiety; Wii; elderly; Spain
►▼ Show Figures 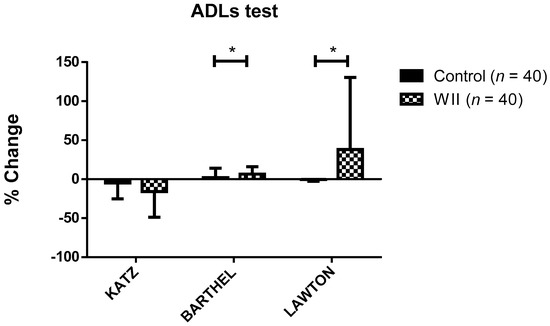