Hair Lead, Aluminum, and Other Toxic Metals in Normal-Weight and Obese Patients with Coronary Heart Disease
Previous Article in Journal

In view of previous reports, it is important to determine the relationship between liver function and the level of fluoride in the serum. The aim of this study was to investigate serum concentrations of fluoride in 72 patients with alcoholic liver cirrhosis, living in the region of Lublin (Eastern Poland) divided based on the severity of disease according to the Child-Turcotte-Pugh criteria. Higher plasma fluoride concentrations were associated with changes in liver related parameters. In all groups of analyzed patients with different stages of alcoholic liver cirrhosis, elevated levels of plasma fluoride and increased activities of both alanine aminotransferase (ALT) and total bilirubin concentration were shown.
Keywords: alcohol; liver cirrhosis; fluoride; ion chromatography alcohol; liver cirrhosis; fluoride; ion chromatography

Alcohol-induced liver disease is a common and sometimes fatal consequence of chronic ethanol abuse in many countries and alcohol consumption is considered as the third most significant health risk factor for the global population [1,2] Ethanol metabolism may result in alcohol- induced liver disease, including hepatic steatosis (fatty liver), alcohol-induced hepatitis, cirrhosis and cancer. The main toxic products in ethanol metabolism include acetaldehyde and free radicals. At the beginning, the liver injury can be reversible: the liver is enlarged, full of fat with collagen fibers, but still has regenerative potential and activity. Then, changes become irreversible—destruction of normal liver architecture and decreased blood flow cause loss of the liver function and hepatic failure (cirrhosis). As a consequence, in patients with alcohol-induced liver disease (ALD) inappropriate levels of drugs, xenobiotics and heavy metals are often observed, compared to healthy individuals [3,4,5]. Alcoholic cirrhosis is defined by the occurrence of extensive fibrosis and regenerative nodules. The Model of End-Stage Liver Disease (MELD) and Child-Pugh Score are used to assess the severity of liver disease and timing for liver transplantation [6].
Fluoride (F) is a trace element which is naturally present in soil, water and food and is also known as an important environmental toxicant, obtained from industrial sources. Fluorides are normally used in low concentrations to reduce the incidence of caries and proper bone mineralization, whereas chronic excessive fluoride exposure, resulting in higher blood concentration and accumulation in different tissues, due to problems with its metabolism and body utilization can impair human health and even induce fluorosis. Chronic excessive fluoride exposure impairs human health and damages the skeletal system and teeth. This leads to simultaneous increase of osteocalcin and calcitonin levels in plasma which may cause fluoride-dependent bone damage and dental fluorosis, characterized by hypo-mineralization of enamel and dentine. Because of the high fluoride affinity to calcium ions, calcification of tissues, vascular walls, synovial capsules and ligaments appears, leading to persistent joint pain and limited join movement [7,8]. Studies based on animal models have shown oxidative stress, DNA damage and apoptosis in liver as an effect of fluorosis [9,10,11]. However, the mechanism of fluoride-induced hepatic toxicity has not been definitely explained. Zhao et al. suggested that fluoride induced apoptosis and autophagy in liver was caused by activating the IL-17 signaling pathway [12]. Girardi and Merler indicated that a high cumulative internal dose of perfluorooctanoic acid showed a statistically significant increase for mortality from liver cancer and liver cirrhosis in male employees [13]. In view of the previous reports, it is important to determine the relationship between stages of alcoholic liver cirrhosis and the level of fluoride in the serum. The aim of this study was to investigate serum concentrations of fluoride in patients with alcoholic liver cirrhosis living in the region of Lublin (Eastern Poland) according to different cirrhosis stages.

The study was conducted at the Department of Internal Medicine, Medical University of Lublin, Poland, and included 72 patients with alcoholic liver cirrhosis from the region of Lublin, (Eastern Poland). The study protocol was approved by the Bioethics Committee at the Medical University of Lublin, Poland (agreement number KE-0254/349/2015).
All subjects gave their written informed consent for participation in the study. According to the World Health Organization (WHO) the optimal fluoride concentration recommended in drinking water normally ranges between 0.5 and 1 mg/L and accounts for approximately 40–70% of daily fluoride ingestion. In the Eastern Poland region, water fluoride concentration was estimated by the Municipal Water and Sewerage Company in Lublin (MPWiK) at around ≤0.5 mg/L [14].
Liver cirrhosis was diagnosed based on clinical features, history of heavy alcohol consumption, laboratory tests and abdominal ultrasonography. Patients with alcoholic hepatitis, hepatocellular carcinoma, viral and autoimmune diseases were excluded from the study. Other exclusion criteria were type 2 diabetes, obesity, acute infections (e.g., pneumonia, spontaneous bacterial peritonitis), acute and chronic heart failure the New York Heart Association classification (>NYHA I), acute and chronic respiratory disorders resulting in respiratory insufficiency, acute kidney injury (AKI) and chronic kidney disease (CKD > stage G2), and excessive exposure in the workplace or living environment to fluoride. Both clinical assessment and laboratory tests were used to exclude underlying liver diseases in the control group. The degree of liver cirrhosis was evaluated according to the Pugh-Child criteria (Pugh-Child score). Based on this, patients were assigned to one of three groups: Pugh-Child (P-Ch) A—21 with stage A, P-Ch B—23 with stage B and P-Ch C—28 with stage C liver cirrhosis. The control group consisted of 22 healthy individuals without liver disease who did not abuse alcohol. Clinical, biochemical and demographic detailed characteristics of patients are presented in Table 1 and Table 2.

The determination of fluoride in studied samples was carried out by ion chromatography (IC) with a suppressed conductometric detection (Dionex DX 500 system consisting of: GP40 Gradient Pump, CD20 Conductivity Detector, and Chromeleon Chromatography Workstation, Dionex, Sunnyvale, CA, USA). The IC method is routinely used in the analysis of fluorides in waters (Chemical Suppression of Eluent Conductivity Method (Environmental Protection Agency—EPA 300.0, ASTM D4327-91 and Standard Methods 4110B, ISO 10359-1); however, plasma samples present a complicated matrix for IC (samples which contain organic material are capable of fouling an ion-exchange column). Therefore, before the analysis each sample underwent an acetonitrile deproteinization procedure (0.5 mL of serum was mixed with an equal volume of acetonitrile, then centrifuged at 5000× g for 8 min. Then 0.1 mL of the supernatant was diluted with 1.0 mL deionized water (resistivity of 18.18 mΩ·cm at 25 °C). Samples of serum were spiked with fluoride standard solution, at concentration levels of 0.5, 1.0, and 2.0 ppm (recoveries ranged between 96.9–99.0%). Stock standard solution (1000 mg/L) of fluoride was prepared by dissolving an appropriate amount of analytical reagent grade sodium salt (Merck (Darmstadt, Germany)) in deionized water.
Chromatographic determinations were carried out according to the manufacturer’s guidelines with the use of IonPac®AS22 Analytical and IonPac AG22 Guard columns dedicated to the analysis of inorganic anions. A mobile phase consisted of 4.5 mMNaHCO3 and 1.4 mM Na2CO3. Flow rate of 1.2 mL/min and injection volume of 25 µL were applied.
Linearity was in the range of 0.01–2.0 mg/L with a correlation coefficient of 0.9996. The limit of detection (LOD, S/N = 3) and limit of quantification (LOQ, S/N = 10) were 3.80 µg/L and 11.40 µg/L, respectively. The relative standard deviations of peak area and peak height were all less than 6.56%.

STATISTICA 13.3 (TIBCO Software Inc., Palo Alto, CA, USA) was used for data analysis. Continuous variables were expressed as the mean ± standard deviation (SD). Before calculations, variables were checked for normality using the Shapiro-Wilk test. The Levene’s test was applied to test equality of variances. To compare the results between more than two groups, one-way ANOVA test was used. The Scheffe’s test was applied for post hoc analysis. Correlations among variables were performed using the Pearson’s correlation test. Qualitative variables are shown as indicators of structure (percentage); for intergroup comparisons the χ2 test was used. For all tests, p < 0.05 was considered as statistically significant.

The clinical and demographic characteristics of the control and alcoholic liver cirrhosis groups are presented in Table 1 and Table 2.
The study findings demonstrated that the serum fluoride level was least statistically significant in the control group: 25.5 ± 17.7 µg/L (ppb) (Table 3 and Figure 1). The serum fluoride concentration increased in the subsequent stages of alcoholic liver cirrhosis to 36.3 ± 10.2 µg/L in P-Ch A, to 41.6 ± 15.6 µg/L in P-Ch B and to 40.6 ± 20.5 µg/L in P-Ch C. Statistically significantly differences in this aspect were indicated between the control group and the subgroup of P-Ch B (p = 0.02) and the subgroup of P-Ch C (p = 0.04).
Correlations between serum fluoride concentrations versus selected laboratory parameters were also analyzed. Positive correlations were found between level of serum fluoride versus the level of total bilirubin (r = 0.21; p = 0.02), mean cell volume (MCV) (r = 0.25; p = 0.01) and ALT (r = 0.19; p = 0.045) (Table 4).
There were no statistically significant differences in serum fluoride level depending on sex (p = 0.74). The presence of complications from liver cirrhosis was not associated with significant differences in the concentration of fluoride (p = 0.49 in the case of ascites, p = 0.31 in the case of encephalopathy, or p = 0.21 in the case of esophageal varices).

This study was supported by grants from Biobanking and BioMolecular Resources Research Infrastructure, Poland (BBMRI.pl).

The study was conducted according to the guidelines of the Declaration of Helsinki, and approved by the Bioethics Committee at the Medical University of Lublin, Poland (agreement number KE-0254/349/2015). 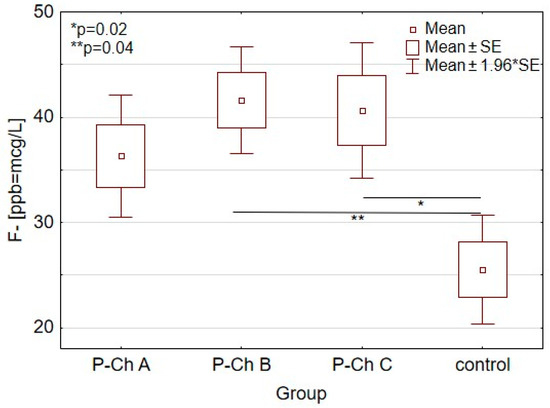