E-cigarettes utilize a wide range of flavoring chemicals with respiratory health effects that are not well understood. In this study, we used pulmonary-associated cell lines to assess the in vitro cytotoxic effects of 30 flavoring chemicals. Human bronchial epithelial cells (BEAS-2B) and both naïve and activated macrophages (THP-1) were treated with 10, 100, and 1000 µM of flavoring chemicals and analyzed for changes in viability, cell membrane damage, reactive oxygen species (ROS) production, and inflammatory cytokine release. Viability was unaffected for all chemicals at the 10 and 100 µM concentrations. At 1000 µM, the greatest reductions in viability were seen with decanal, hexanal, nonanal, cinnamaldehyde, eugenol, vanillin, alpha-pinene, and limonene. High amounts of ROS were elicited by vanillin, ethyl maltol, and the diketones (2,3-pentanedione, 2,3-heptanedione, and 2,3-hexanedione) from both cell lines. Naïve THP-1 cells produced significantly elevated levels of IL-1β, IL-8, and TNF-α when exposed to ethyl maltol and hexanal. Activated THP-1 cells released increased IL-1β and TNF-α when exposed to ethyl maltol, but many flavoring chemicals had an apparent suppressive effect on inflammatory cytokines released by activated macrophages, some with varying degrees of accompanying cytotoxicity. The diketones, L-carvone, and linalool suppressed cytokine release in the absence of cytotoxicity. These findings provide insight into lung cell cytotoxicity and inflammatory cytokine release in response to flavorings commonly used in e-cigarettes. View Full-Text
Keywords: electronic cigarettes; e-cigarettes; flavorings; toxicity; airway epithelium; macrophages; inflammation electronic cigarettes; e-cigarettes; flavorings; toxicity; airway epithelium; macrophages; inflammation
►▼ Show Figures 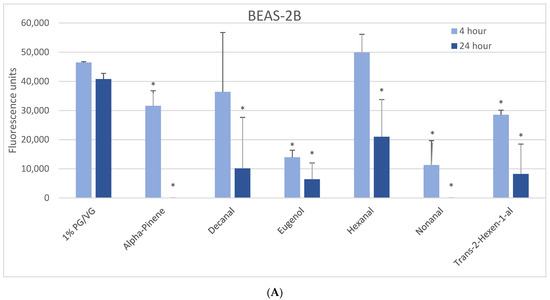