Impact of Pesticide Exposure among Rural and Urban Female Population. An Overview

Mercury Levels in Feathers of Penguins from the Antarctic Peninsula Area: Geographical and Inter-Specific Differences

Polar regions, symbols of wilderness, have been identified as potential sinks of mercury coming from natural and anthropogenic sources at lower latitudes. Changes in ice coverage currently occurring in some areas such as the Antarctic Peninsula could enhance these phenomena and their impacts on local biota. As long-lived species at the top of food chains, seabirds are particularly sensitive to this highly toxic metal with the capacity to be biomagnified. Specifically, their feathers can be useful for Hg monitoring since they mainly accumulate its most toxic and persistent form, methyl-Hg. To that end, feathers of gentoo (Pygoscelis papua), chinstrap (P. antarcticus), and Adélie penguins (P. adeliae) (n = 108) were collected by passive sampling in seven different locations throughout the Antarctic Peninsula area and analyzed by ICP-MS after microwave-digestion. More than 93% of the samples showed detectable Hg levels (range: 6.3–12,529.8 ng g−1 dry weight), and the highest ones were found in the feathers of chinstrap penguins from King George Island. Hg bioconcentration and biomagnification seem to be occurring in the Antarctic food web, giving rise to high but non-toxic Hg levels in penguins, similar to those previously found in Arctic seabirds. View Full-Text
Keywords: mercury; penguins; feathers; Antarctic Peninsula; biomonitoring mercury; penguins; feathers; Antarctic Peninsula; biomonitoring
►▼ Show Figures 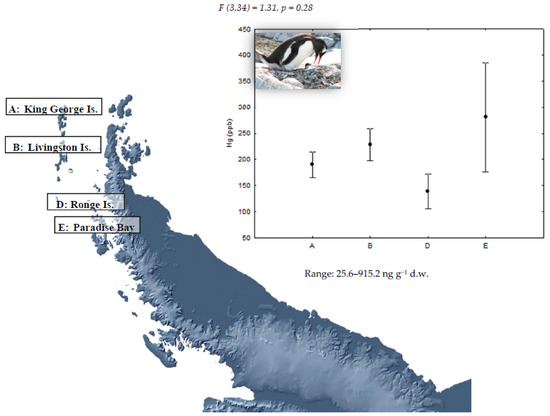