The purpose of this study was to quantify the coordination between agonist and antagonist elbow muscles during squash backhand crosscourt shots in adult female players. Ten right-handed, international-level, female squash players participated in the study. The electrical muscle activity of two right elbow agonist/antagonist muscles, the biceps brachii and triceps brachii, were recorded using a surface EMG system, and processed using the integrated EMG to calculate a co-activation index (CoI) for the preparation phase, the execution phase, and the follow-through phase. A significant effect of the phases on the CoI was observed. Co-activation was significantly different between the follow-through and the execution phase (45.93 ± 6.00% and 30.14 ± 4.11%, p < 0.001), and also between the preparation and the execution phase (44.74 ± 9.88% and 30.14 ± 4.11%, p < 0.01). No significant difference was found between the preparation and the follow-through phase (p = 0.953). In conclusion, the co-activation of the elbow muscles varies within the squash backhand crosscourt shots. The highest level of co-activation was observed in the preparation phase and the lowest level of co-activation was observed during the execution. The co-activation index could be a useful method for the interpretation of elbow muscle co-activity during a squash backhand crosscourt shot. View Full-Text
Keywords: racket sport; injury; elbow; electromyography; co-activation racket sport; injury; elbow; electromyography; co-activation
►▼ Show Figures 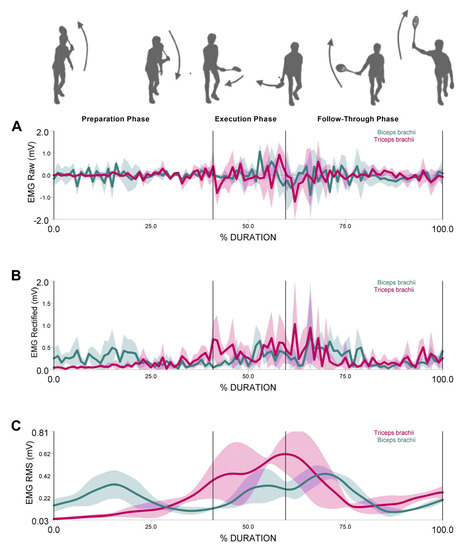