The Association between Cardiorespiratory Fitness and Reported Physical Activity with Sleep Quality in Apparently Healthy Adults: A Cross-Sectional Study

:
Parents play a key role in the youth sports educational experience. They are responsible for the introduction of their children to physical or sporting education and their involvement has been associated with sport participation in early stages. The aims of this cross-sectional study were, first, to assess the perceived and desired parental involvement by children and, secondly, to examine their satisfaction or dissatisfaction with any specific behavior. 80 male soccer players filled the Parental Involvement in Sport Questionnaire (PISQ) before or after a training session in presence of a coach. PISQ results revealed excessive active involvement and pressure, insufficient praise and understanding and satisfactory directive behavior from children’s parents. Our findings suggest that excessive parental involvement can cause pressure on children who would prefer parental participation characterized by praise and understanding. A balance between a supporting involvement without putting too much pressure is needed by the parents. To prevent burnout and dropout and to facilitate future practice, parents should be counseled (possibly by a sport educator) on how to positively support their children concerning their sport experience.
Keywords:
parental involvement; youth sport experience; directive behavior; parenting educational style; pressure

As it has been strongly emphasized during the last decade, a physically active lifestyle benefits health and social domains [1,2]. Indeed, general well-being and good individual bio-psycho-social functioning are affected by physical inactivity [3] which is a risk factor for illnesses in adulthood [4]. Participation in sports in childhood and adolescence is related to an active lifestyle practice in young adulthood [5,6] and has also been reported to increase the probability of a high amount of physical activity in later life [1,7].
Parents play an important role in this participation, as they usually contribute to children’s initial sport involvement and provide concrete and emotional support throughout children’s sport careers [8]. Moreover, parents are those responsible to introduce their children to physical and sporting activity (PSA) [9] providing transport, access [10], educational, and emotional and economic support. Indeed, parents bring their children to the competition venue and remain there, which means that parents can potentially affect the child and their behavior with several instances [11].
The nature of parent involvement in organized youth sport has often been debated and criticized [12], with both positive and negative implications to children’s experience. Thus, the role of parents’ involvement in this educational process needs to be better investigated and clarified. Parent involvement consists of both parent support and pressure behaviors which make it a complex and multidimensional construct [13,14,15,16,17,18,19,20]. However, some studies supported the opposite [21,22,23,24]. Indeed, several studies reported that children appreciate the participation and interest of parents in monitoring their sport educative activities, but that parents must be alert and aware of the level and manner of their engagement so that the experience of their children in the sport context can be positive [25,26,27,28,29,30,31,32].
Parent support has been linked to several factors related to sports participation such as child enjoyment and enthusiasm, autonomy, and self-perception of sport skill [15]. Parent pressure, instead, has been linked to negative outcomes related to sport performance such as the perceptions of a threatening environment, discontent, anxiety and negative impact [16,19]. Indeed, in players perceiving more pressure from their parents, a positive association with amotivation and a negative one with enjoyment was found [22].
All the aforementioned aspects together with parents’ physical activity contribute to define their attitudes and behaviors regarding the sport experience of their children [29,31,32]. Parental involvement and the potential pressure on children’s sport educational process are then crucial and necessary to examine, as these aspects might condition children’s efforts in those activities [25,26].
Some researchers reported negative aspects besides the positive influence of parental support. Indeed, studies showed that parental expectations are a source of stress among young athletes, possibly due to the awareness of their parents’ efforts [33,34].
Hellstedt [35] proposed a model that describes three styles of involvement: underinvolved, moderately involved, and overinvolved. Underinvolved families, then parents, show little to no interest in the child’s sport, talent, or progress. Moderately involved athlete families balance firm parental direction with the child’s power to make her or his own decisions about goals, participation, and commitment. Overinvolved parents are emotionally involved with the child’s sport experiences and performance, and they tend to project their lives into their child’s sport successes [35]. Parental behaviors include dreams of fame, considering their child’s sport experience as an investment for the future, and also invading the coaches’ field of action, attending practices constantly and focusing on winning rather than on child’s skill and motor development, enjoyment, and health.
Similarly, Lee and MacLean [36] have defined active involvement referring to children who consider their parents actively involved in their sport experience, a typology of parental behavior that cause positive reaction and satisfaction in young athletes [24]. Directive behavior [36], instead, is when children feel controlled by their parents in sports promoting the perception of pressure [24]. Parental pressure has been defined as parental behaviors that symbolize high or even unattainable expectations in the minds of child athletes [17].
Moreover, a narrative review by Amado et al. [37] reported that parental pressure towards children’s sport was positively related with stress, while it was negatively associated with enjoyment and motivation [25]. Conversely, a parental participation characterized by praise and understanding [36] favor increased levels of players’ enjoyment and motivation for sport [22].
Although parental involvement has been related to sport participation in early ages, there is still poor research about this topic in youth sport education. In line with previous studies, it is predictable that excessive parental involvement could be related to excessive pressure among young athletes. Therefore, the objective of the present study was twofold: to better clarify parental involvement in youth sport experience and the perceived support and pressure by children. The first aim was to assess perceived and desired parental involvement by children; the second aim was to analyze children’s satisfaction or dissatisfaction with specific behaviors by their parents comparing perceived and desired behaviors.

The present work is an analytical cross-sectional study that collected data through a psychological scale, the Parental Involvement Sport Questionnaire (PISQ) [36]. In addition, discrepancies between perceived and desired behavior ratings versus satisfaction value were compared. Any possible correlations between the variables existed was also analyzed.

All analyses were performed using SPSS Statistics Version 23.0(IBM Corp, Armonk, NY, USA) and the data were presented as group mean values and standard deviations. Cronbach’s alpha was calculated to assess the internal consistency of the psychological measures; according to Cohen [40] (2011) scores from 0.70 to 0.79 are considered reliable, from 0.80 to 0.90 as highly reliable, and >0.90 as very highly reliable. Normality of all variables was assessed using the Shapiro–Wilk test. To compare discrepancy scores with satisfaction value (i.e., zero), a single sample t-test was applied. When a positive or negative difference was observed a two-tailed test was performed. Effect size (d) for the one-sample t-test was calculated according to Cohen’s definition of small, moderate and large (a value equal to 0.20, 0.50, and 0.80, respectively) [41]. In addition, Pearson’s correlation coefficient (r) was calculated to measure the direction and strength of the relation between all the subscales: an r value of 0.5 to 0.7 is considered low, 0.7 to 0.8 is moderate, and 0.9 or above is good [42] (Vincent and Weir, 2012). Statistical significance was set at p ≤ 0.05.

The present study contributes to the understanding of parent involvement in sport educational process, suggesting that excessive parental involvement may be perceived as a source of pressure among young athletes. In addition, children seem to prefer a parental participation characterized by praise and understanding.
Further studies are needed concerning parental influences on children’s physical and sport activities experience to improve existing and future intervention programs and children and adolescent’s compliance to these activities.

The study was conducted according to the guidelines of the Declaration of Helsinki. Ethical review and approval were not required for the study on human participants in accordance with the local legislation and institutional requirements.

Dataset will be made available upon request. 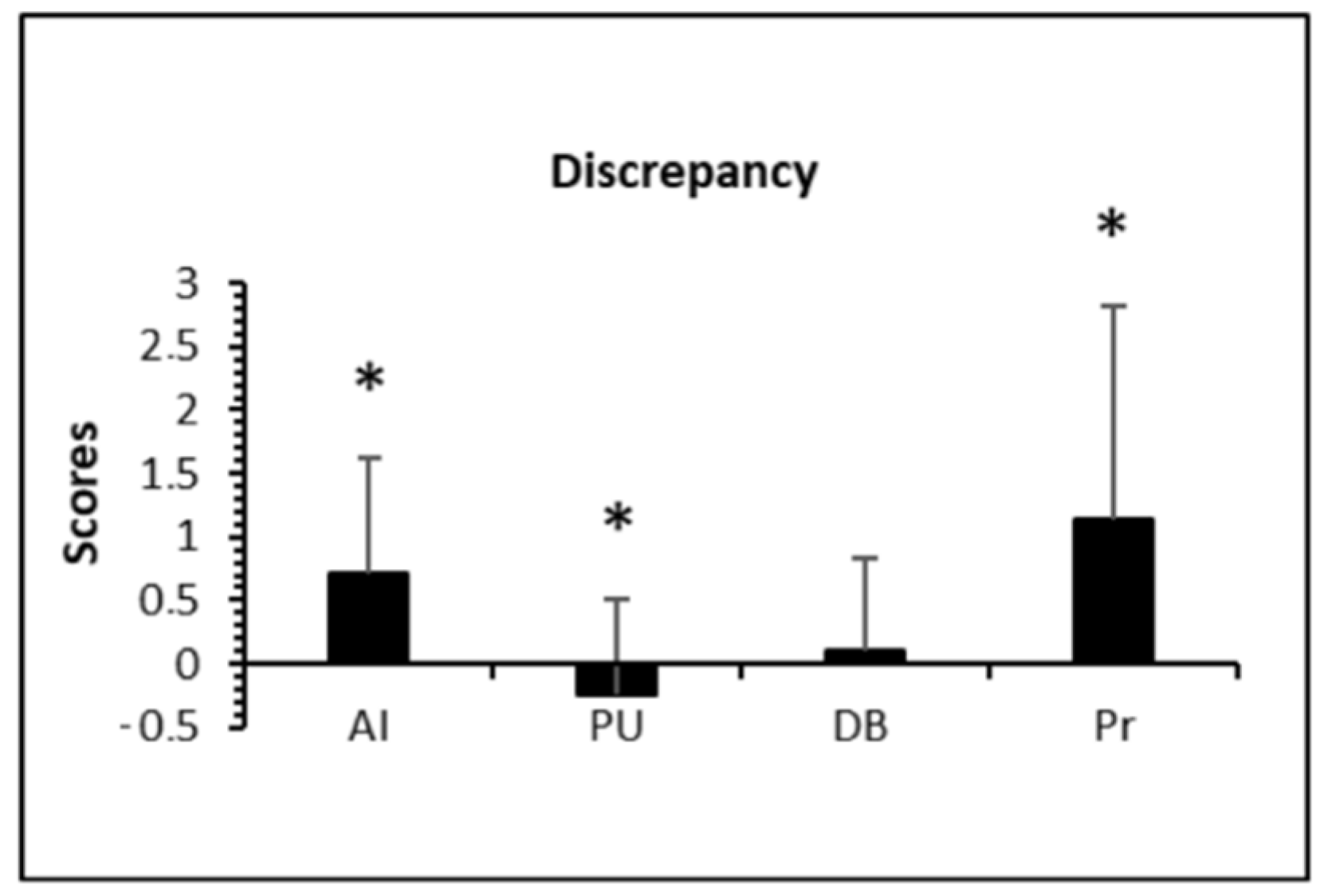