Profiles of Internet Use and Health in Adolescence: A Person-Oriented Approach
Previous Article in Journal

Tobacco use is a public health crisis that has warranted attention for decades [1,2]. In recent years, the prevalence of cigarette smoking has decreased among US youth and adults [3,4]. However, this decline has been juxtaposed with an uptick in electronic cigarette (e-cigarette) use, especially among youth [3]. E-cigarettes are devices that deliver nicotine, flavors, and other additives through inhaling vaporized aerosols [1]. The tobacco product landscape is ever evolving, and e-cigarettes today come in many forms, such as traditional disposable devices, tank devices, and pod systems/pod mods [1]. With e-cigarettes and other products, youth are often the target of marketing and advertising by the tobacco industry to cement tobacco use behaviors early and establish the potential for lifetime tobacco purchasing [5]. Thus, it is imperative to better understand the reasons influencing youth decisions to try and continue using these products.
Among US youth, e-cigarettes are the most used tobacco product [6]. In 2020, approximately 13% of US middle and high school students—3.6 million youth—used e-cigarettes in the past 30 days [6]. That same year, the prevalence of cigarette use among youth was 3.3%, slightly lower than the prevalence of cigar use (3.5%) and higher than the prevalence of smokeless tobacco use (2.3%) [6]. Several studies have linked e-cigarette use with subsequent use of combustible tobacco products, with dire implications for deleterious health outcomes; thus, it is important to understand the drivers of use [7,8].
Temptations to use tobacco products may help explain use behaviors. Temptation to smoke among youth refers to the willingness or susceptibility to use tobacco products in particular situations [9]. This construct can be used to identify youth who are susceptible to initiating tobacco product use [9]. Factors, such as the social environment and negative affect, may tempt youth into trying or continuing to use tobacco products [10,11,12]. For example, family and friend smoking is associated with tobacco use among youth, and social context, such as the number of friends who smoke and views on tobacco’s acceptability, is a substantial component to understanding tobacco use behaviors [13,14,15]. In addition, internalizing problems and psychological distress are linked to tobacco initiation and use, with recent empirical evidence establishing a relationship between these factors and e-cigarette use [11,12,16]. Although studies on temptation to use e-cigarettes are limited, the relationship between being tempted to use tobacco and tobacco use shown in other studies is likely similar [17,18,19].
Tobacco use disproportionately burdens certain youth demographic groups. For example, while past-30-day e-cigarette use prevalence in 2020 was similar between male and female youth, the prevalence was substantially higher among White youth (15.5%) than Black youth (6.2%) [6]. In addition, although Black youth have relatively low overall prevalence of tobacco product use, they have the highest prevalence of individual cigar use [6]. Thus, not only is it important to understand determinants of tobacco use, but also how tobacco product use patterns differ by group (e.g., gender, race/ethnicity). Further, tobacco use disparities exist by socioeconomic status and rurality in the United States [20,21]. The 13-state Appalachian region, which ranks high in both poverty and tobacco use, contains disproportionately affected populations of youth who may be differentially exposed to tobacco products [22]. Increased exposure to tobacco products and use may be driven by rural lifestyle, community acceptance of tobacco, and familial involvement in the tobacco trade [22]. Thus, it is not surprising that the prevalence of tobacco product use in the Appalachian region exceeds the national average (20% vs. 16%, respectively) [23]. For example, one study found that smoking remains a significant issue among adults in Central Appalachia, despite substantial declines in smoking rates throughout other US regions during the past decade [24]. These findings also have implications for Appalachian youth as household tobacco use has been linked to tobacco and polytobacco use in this population [25].
The objective of this study is to examine the association between tobacco use status and temptation to try e-cigarettes among a sample of Appalachian youth. The study aims are: (1) to investigate the extent to which tobacco use status is associated with temptation to try e-cigarettes, and (2) to assess the moderating role of gender and race/ethnicity on these associations. One goal is to investigate temptation to try e-cigarettes among youth who have not tried e-cigarettes to shed light on groups potentially at risk for initiation. Another goal is to explore temptation patterns among e-cigarette users to better understand users who may be prone to continued use, including experimenting with additional electronic nicotine delivery systems (ENDS).

The Youth Appalachian Tobacco Study (YATS) is a cross-sectional analysis of youth residing in the Appalachian regions of Kentucky, North Carolina, and New York from 2014–2016 (N = 1280). Appalachian states were selected based on differing youth tobacco use rates. Within each state, we identified Appalachian counties with poverty levels that exceed the national average and their state’s average. From the identified counties, public schools were randomly selected. If a school declined, another was invited to participate. Students in participating schools completed a questionnaire that took approximately 45 min. The questionnaire was distributed during the regular school day and included questions about tobacco use behaviors, tobacco-related perceptions and attitudes, and sociodemographic characteristics. Parental consent and student assent were obtained before data collection. Details on YATS can be found elsewhere [26]. The University of Louisville’s Institutional Review Board approved this research.
Participants who did not respond to the tobacco use variables (n = 90), 12 e-cigarette temptation situations (n = 81), or relevant covariates, gender (n = 16), race/ethnicity (n = 36), and household tobacco users (n = 10), to be adjusted in the analysis, were excluded. This resulted in an analytic sample of 1047.

Youth who participated in YATS indicated whether they were tempted to try e-cigarettes in the following twelve situations: (1) while talking and relaxing; (2) when things are not going my way and I am frustrated; (3) with friends at a party; (4) when others are talking about how much they like e-cigarettes; (5) when I am afraid I might gain weight; (6) while having a good time; (7) when I am very anxious and stressed; (8) when I want to fit in with a crowd; (9) when I want to know how an e-cigarette tastes; (10) when I want to lose weight; (11) when my friends ask if I want to try an e-cigarette; (12) when it is difficult to refuse an e-cigarette. The first ten situations were derived from the validated Situational Temptations Inventory for Smoking, which is highly reliable [9,27]. The situations in this inventory contain measures on positive social and negative affect situations, habit strength, and weight control [9]. Although the inventory is often used in smoking cessation programs to prevent smoking relapse [9,19], it can be used to identify patterns of initiation and continued use among younger populations. YATS included situations 11 and 12 to add social situations relevant to peer influence and tobacco use. For the twelve situations, response options ranged from 1) “not tempted at all” to 5) “extremely tempted.” An e-cigarette use temptation scale was created by summing the twelve situation scores (range: 12–60), with a score of 12 indicating youth who responded “not tempted at all” to each situation, and a score of 60 indicating youth who responded “extremely tempted” to each situation. Distributions and means of each e-cigarette temptation situation and the e-cigarette use temptation scale are presented in Supplementary Table S1. A Cronbach’s alpha was calculated to test the internal reliability of the twelve situations among the entire sample, with a value of 0.96 indicating excellent reliability (see Supplementary Table S2).

3.1. Sociodemographic Characteristics by Tobacco Use Status

Substantial variation in the extent to which tobacco use status is associated with temptation to try e-cigarettes exists overall and by sociodemographic groups, such as gender and race/ethnicity. Importantly, our results suggest that non-e-cigarette users from racial/ethnic minority groups may find themselves in situations that tempt them to try e-cigarettes more than their White counterparts. Tailored tobacco prevention efforts for groups at-risk of initiating or continuing e-cigarette use, such as Appalachian youth, are especially important. Refinements to such efforts based on sociodemographics may contribute to overall effectiveness, thus decreasing the likelihood of negative long-term health consequences that come with e-cigarette use.

This research was supported, in part, by the National Heart, Lung, and Blood Institute (NHLBI) of the National Institutes of Health (NIH) and FDA Center for Tobacco Products under Award Numbers P50HL120163 and U54HL120163, and the American Heart Association under Award Number 20YVNR35500014. The content is solely the responsibility of the authors and does not necessarily represent the official views of the NIH, the Food and Drug Administration, or the American Heart Association. The funding sponsors had no role in study design; data collection, analyses, or interpretation; manuscript preparation; or the decision to publish the results.

The study was conducted according to the guidelines of the Declaration of Helsinki and approved by the Institutional Review Board of University of Louisville (protocol code 14.0225; approval 30 April 2014).

The data used in this study are available on request from the corresponding author. 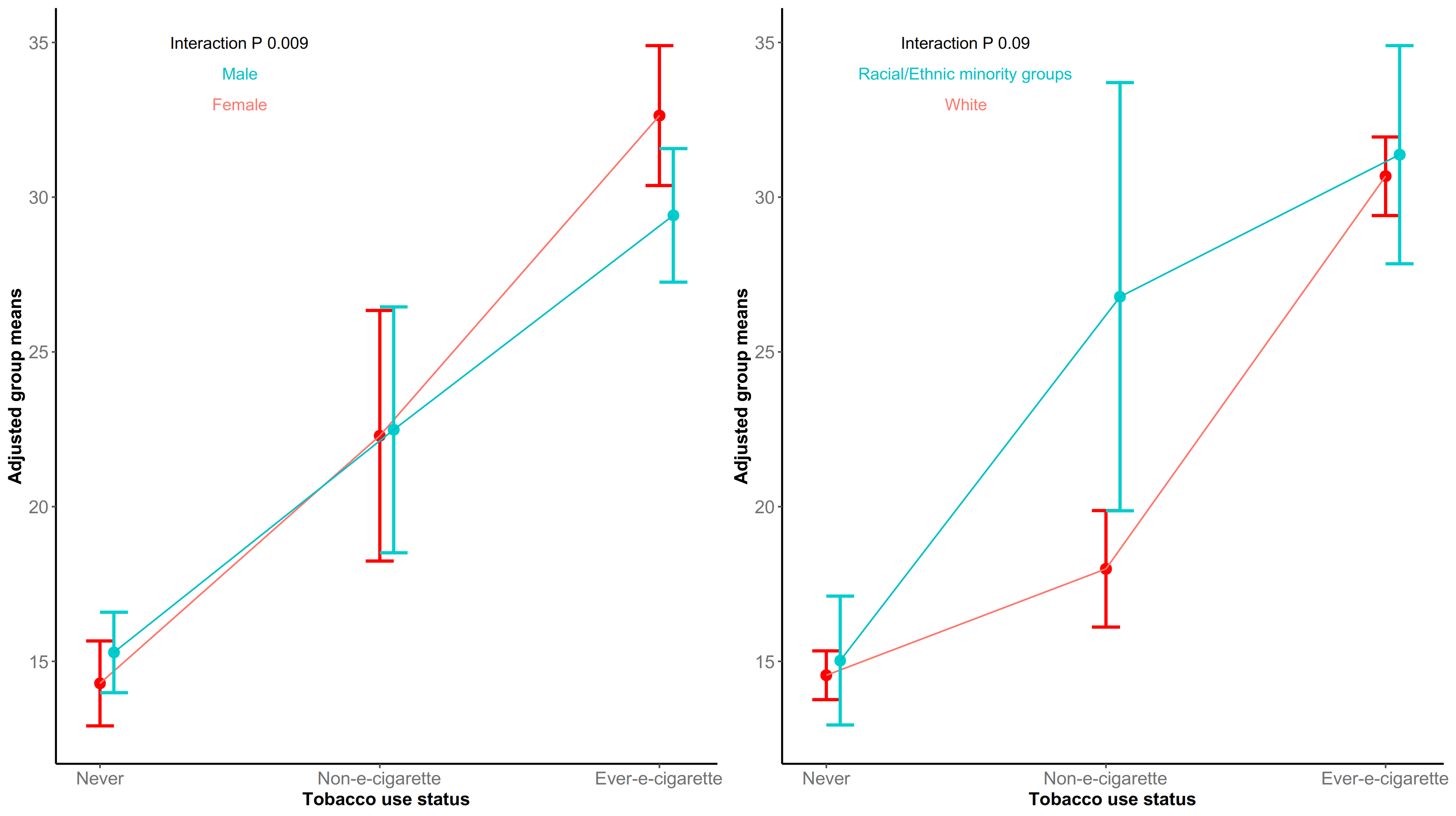