Healthcare Providers’ Knowledge and Attitude Towards Abortions in Thailand: A Pre-Post Evaluation of Trainings on Safe Abortion
Previous Article in Special Issue

Inequalities in Rotavirus Vaccine Uptake in Ethiopia: A Decomposition Analysis

The Integrated Child Development Services (ICDS) program launched in India in 1975 is one of the world’s largest flagship programs that aims to improve early childhood care and development via a range of healthcare, nutrition and early education services. The key to success of ICDS is in finding solutions to the historical challenges of geographic and socioeconomic inequalities in access to various services under this umbrella scheme. Using birth history data from the National Family Health Survey (Demographic and Health Survey), 2015–2016, this study presents (a) socioeconomic patterning in service uptake across rural and urban India, and (b) continuum in service utilization at three points (i.e., by mothers during pregnancy, by mothers while breastfeeding and by children aged 0–72 months) in India. We used an intersectional approach and ran a series multilevel logistic regression (random effects) models to understand patterning in utilization among mothers across socioeconomic groups. We also computed the area under the receiver operating characteristic curve (ROC-AUC) based on a logistic regression model to examine concordance between service utilization across three different points. The service utilization (any service) by mothers during pregnancy was about 20 percentage points higher for rural areas (60.5 percent; 95% CI: 60.3; 30.7) than urban areas (38.8 percent; 95% CI: 38.4; 39.1). We also found a lower uptake of services related to health and nutrition education during pregnancy (41.9 percent in rural) and early childcare (preschool) (42.4 percent). One in every two mother–child pairs did not avail any benefits from ICDS in urban areas. Estimates from random effects model revealed higher odds of utilization among schedule caste mothers from middle-class households in rural households. AUC estimates suggested a high concordance between service utilization by mothers and their children (AUC: 0.79 in rural; 0.84 in urban) implying a higher likelihood of continuum if service utilization commences at pregnancy. View Full-Text
Keywords: ICDS; child undernutrition; childcare; India ICDS; child undernutrition; childcare; India
►▼ Show Figures 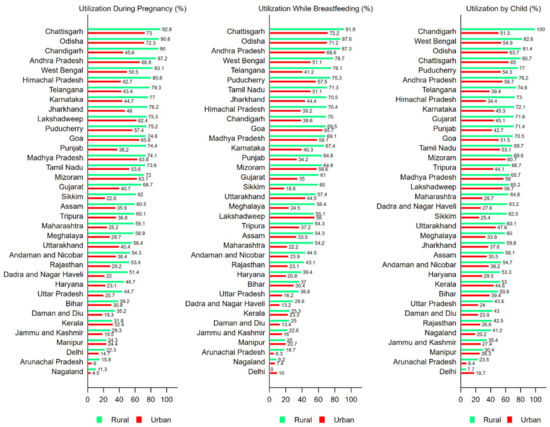