Investing Time and Resources for Work–Life Balance: The Effect on Talent Retention
Next Article in Special Issue

Evaluation of an Alimentary Education Intervention on School Canteen Waste at a Primary School in Bari, Italy
Previous Article in Journal

Histologic, Histomorphometric, and Clinical Analysis of the Effects of Growth Factors in a Fibrin Network Used in Maxillary Sinus Augmentation
Previous Article in Special Issue

Chocolate, “Food of the Gods”: History, Science, and Human Health

:
The impact of waste incinerators is usually examined by measuring environmental pollutants. Biomonitoring has been limited, until now, to few metals and to adults. We explored accumulation of a comprehensive panel of metals in children free-living in an urban area hosting two waste incinerators. Children were divided by georeferentiation in exposed and control groups, and toenail concentrations of 23 metals were thereafter assessed. The percentage of children having toenail metal concentrations above the limit of detection was higher in exposed children than in controls for Al, Ba, Mn, Cu, and V. Exposed children had higher absolute concentrations of Ba, Mn, Cu, and V, as compared with those living in the reference area. The Tobit regression identified living in the exposed area as a significant predictor of Ba, Ni, Cu, Mn, and V concentrations, after adjusting for covariates. The concentrations of Ba, Mn, Ni, and Cu correlated with each other, suggesting a possible common source of emission. Exposure to emissions derived from waste incinerators in an urban setting can lead to body accumulation of specific metals in children. Toenail metal concentration should be considered a noninvasive and adequate biomonitoring tool and an early warning indicator which should integrate the environmental monitoring of pollutants.
Keywords:
metals; children; toenails; biomonitoring; waste; incinerators

Waste incineration in industrial plants generates bottom and fly ashes, which are released into atmosphere after appropriate purification. This procedure, however, does not completely remove toxic chemicals from the emissions. Heavy metals (manganese, lead, cadmium, copper, nickel, mercury, thallium, and vanadium in particular) cause concerns for public health [1,2,3,4,5]. Fly ash emitted from waste incinerators contains large amounts of metals, leading to potential ecological risk [6,7] also due to a progressive accumulation in surrounding soils [2,8]. A study investigating heavy metals in fly ash from 15 municipal solid waste incinerators showed that metals could easily leach out, mainly due to the high content of acid soluble fraction and reducible fraction. This might generate elevated environmental risk [7]. Metals are abundantly present in particulate matter produced by waste incinerators (mainly fine and ultrafine particles, PM0.2–2.5), with dominant presence of vanadium, nickel, copper, zinc, cadmium, and lead in fine particles and with magnesium, aluminum and thallium in coarse particles [5]. Fine particles emitted from waste incinerators have elevated content of heavy metals and are more cytotoxic than those emitted from biomass incineration [9], thus contributing to human toxicity [10].
Metals can enter the human body through different routes such as dermal contact, inhalation, and ingestion [11,12]. Children are particularly vulnerable, in terms of biological effects, when exposed to metal pollution [13,14,15,16,17], mainly due to oxidative damage following chronic exposure [18,19]. In pediatric age, the body burden of metals has been linked with a number of pathologic conditions including nononcologic diseases (i.e., altered growth and development [20], obesity [21,22], and neurologic [23,24,25], cognitive [26], and respiratory [19,27] disorders) and cancer [28,29,30].
A recent study characterizing the distribution of heavy metals in ambient air particles (PM1, PM2.5, PM10) emitted from a municipal waste incinerator, indicated that children living close to this industrial plant had a high noncarcinogenic risk and a high lifetime carcinogenic risk following exposure to toxic metals bound to the emitted particles [28]. Several studies explored the concentration of heavy metals (mainly lead, cadmium, mercury, nickel, and chromium) in adults exposed to emissions from waste incinerators [31,32,33,34,35,36]. However, in the majority of cases a limited number of metals have been considered, and the sampling procedures were on blood and/or urine, thus mainly representing short- rather than long-term exposure [37,38,39,40]. Similarly, previous biomonitoring studies in exposed children only determined the body burden of few trace elements (mainly manganese [3], chromium, lead, and cadmium [41,42,43]), not considering the wide panel of metals [1,5] emitted by waste incinerators.
Thus, studies investigating the long-term accumulation of multiple metals in children living close to waste incinerators are still lacking. Furthermore, noninvasive biomonitoring tools able to determine, in this age class, the health risk deriving from the discharge of hazardous pollutants into the environment are strongly needed. In fact, human biomonitoring has been proposed as more useful to assess possible health effects than environmental monitoring [44,45]. In this respect, human nails have been frequently employed for the assessment of metal exposure of various origin [46], have been used in pediatric age [47,48,49,50,51], and have been indicated as suitable indicators of long-term exposures [52,53].

The aim of the present study was to measure the body burden of a wide panel of metals (23 different elements, see Section 2.4) in children living in an urban setting, at different distances from two waste incinerators. According to previous evidence, the concentration of metals in toenails was employed as an indicator of chronic environmental exposure [37,38,39,52,53], adjusting results for possible confounders.

A public campaign served to explain the aims of the study. Subsequently, a total of 220 children (128 males, age range 6–9 years) were enrolled in the city of Forlì (Emilia-Romagna region, Northern Italy, 117,946 residents in 2017) from December 2016 to March 2017, after parents signed informed consent. Children also agreed to participate as volunteers.
Inclusion criteria were living at the same address in the last 6 months before enrollment, and the presence of a signed informed consent.
Subjects with previously known diseases were excluded from the study.
In the urban study area, two incinerators are located about 200 m from each other: a municipal solid waste incinerator (total capacity 100,000 Nm3/h), and a hospital waste incinerator (total capacity of 21,500 Nm3/h). Besides these two plants, according to the official emission inventories, the remaining sources of air pollution in the explored area are vehicular traffic (urban traffic, two major roadways) and domestic heating during cold season.
All enrolled children were georeferentiated. According to previous studies [28,33,41,54,55,56,57] and to results from a dispersion model specifically assessed for the two incinerators [54], exposed subjects were considered those living within a 3 km radius circle around the two plants, with the circle centered in the middle distance between the two (Figure 1).
Subjects in the reference area (controls) were the residents living outside this circle.
The Romagna Ethical Committee (CEROM) approved the study protocol. The initiative was entirely self-financed with popular events for fundraising or voluntary donations. Written informed consent was signed by both parents.

A questionnaire served to explore further possible environmental conditions or personal behaviors able to influence the concentration of metals in toenails. Covariates included residential proximity (i.e., less than 300 m) to busy roads, previous orthodontic treatments, regular practice of outdoor sports, hobbies involving the use of chemicals, exposure to passive smoke, and regular consumption of locally grown vegetables. The questionnaire was administered to parents for self-compilation.

Toenails were selected for sampling as preferential to fingernails due to a minor risk of external contamination [58]. The procedures for toenail collection, sample preparation, and analysis have been extensively employed in previous studies [47,48,59,60,61,62,63,64,65,66,67].
Toenails were clipped using ceramic blade to avoid possible contamination. Samples were thereafter stored in a 10 mL polypropylene tube for subsequent analysis, and scissors were cleaned with a light-acid solution. Toenails were examined according to a standardized technique [68]. Briefly, samples were immersed in a 70% ethanol solution without stirring or sonication for a period of 10 min, to reduce the risk of microbiological contamination. Exogenous impurities were removed by a multistep washing procedure with acetone and Milli-Q purified water, and the cleaned samples were kept at room temperature for a period from 24 to 48 h for drying.
The dry samples were weighed, and the concentration of 23 elements (Aluminum (Al), Antimony (Sb), Arsenic (As), Barium (Ba), Beryllium (Be), Boron (B), Cadmium (Cd), Chromium (Cr), Cobalt (Co), Iron (Fe), Manganese (Mn), Mercury (Hg), Molybdenum (Mo), Nickel (Ni), Lead (Pb), Copper (Cu), Selenium (Se), Thallium (Tl), Thorium (Th), Tungsten (W), Uranium (U), Vanadium (V) and Zinc (Zn)) was subsequently calculated, using inductively coupled plasma mass spectrometry (ICP-MS) and the EPA 6020A 2007 method.

Frequencies of categorical variables and means and standard errors of continuous variables were calculated. The Wilcoxon test or the chi-squared test were employed to compare differences among groups. Correlations were tested using the Spearman’s rank correlation coefficient. Tobit regression models were employed to examine the association between the concentration of metals and potential influencing factors. Tobit regression was also used to accommodate the left-censored nature of values, due to the presence of samples with metal concentration below the limit of detection [69]. Metal concentrations were log-transformed to meet the normal assumption [70]. P values < 0.05 were considered statistically significant.
Analyses were performed using R software version 3.5.1 (R Project for Statistical Computing, available from https://www.r-project.org/).

The release of metals from waste incinerators located in an urban area can contribute to human toxicity following chronic exposure, in particular in children.
The present study employed the concentration of metals in toenails as an expression of long-term body accumulation of a wide panel of metals, demonstrating, in children living close to waste incinerators, an increased concentration of specific metals (in particular Ba, Mn, Cu, and V) potentially leading to an increased health risk.
Measuring the concentration of metals in toenails should be considered a noninvasive and adequate biomonitoring tool and an early warning indicator, which could allow a more realistic and comprehensive analysis of risk assessment as compared with the simple monitoring of environmental pollutants. 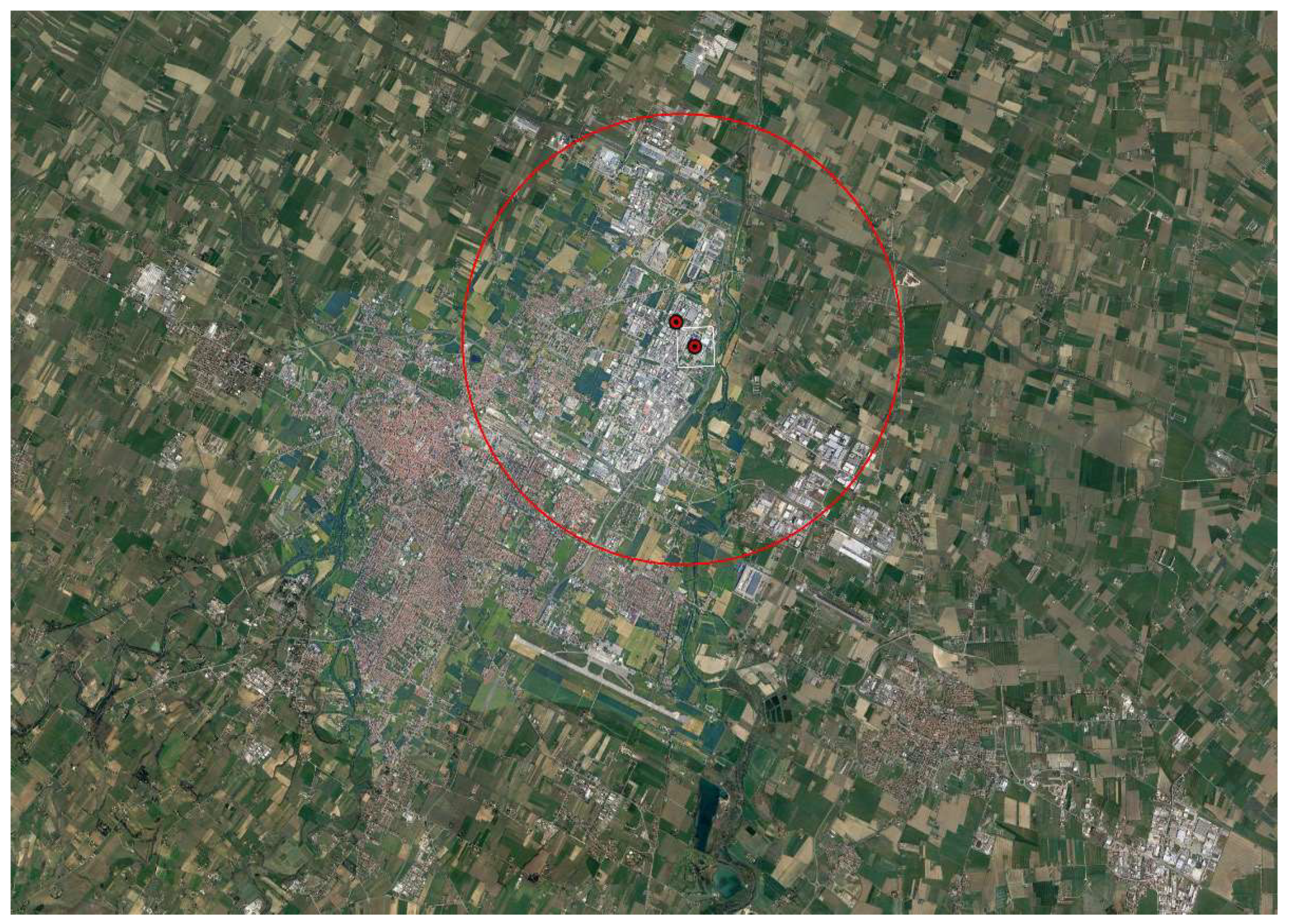