Background: An adequate level of muscular fitness is related to occupational performance in military personnel, including pilots flying high performance aircraft. The aim of this study was to describe the baseline level and the change in muscular fitness between the first and the second years of the Air Force Academy among fighter pilot cadets. Methods: The muscular strength and endurance test results of 182 male fighter pilot cadets were analyzed during their first year in the Air Force Academy and one year after. Maximal isometric strength tests included trunk flexion, trunk extension and bilateral leg extension tests, whereas muscle endurance was measured with modified a sit-up test and seated alternative dumbbell press. Results: The maximal isometric bilateral strength of the leg extensor muscles increased from 220 ± 42 to 232 ± 42 kg. The maximal isometric trunk extension strength increased from 117 ± 21 to 120 ± 19 kg and trunk flexion from 82 ± 16 to 86 ± 17 kg. Muscle endurance increased from 68 ± 13 to 75 ± 15 repetitions/min in seated dumbbell press and from 47 ± 12 to 51 ± 13 repetitions/min in sit-up test. Conclusions: Both maximal strength and muscular endurance improved among fighter pilot cadets, which indicates that occupational performance is well maintained or improved from the perspective of physical fitness during the early phase of academy studies. Education in the Air Force Academy, including physical education, seems beneficial in improving muscular fitness among military pilots.
Keywords: muscular fitness; fighter pilot; military aviation muscular fitness; fighter pilot; military aviation

Physical fitness is a vital component for performing different military tasks including flying high performance aircraft (HPA). Sufficient levels of muscular strength and endurance are both important due to potential physical demands during high Gz (headwards acceleration resulting in a downward force) exposure and anti G-straining maneuvers [1]. Moreover, there is evidence that resistance training improves human tolerance to air combat maneuvering and Gz in terms of prevention of the G-induced loss of consciousness [2]. It seems that the more technical nature of today’s aircrafts has not reduced the physical requirements of military aviators [3]. Previous studies have observed that exposure to Gz force causes fatigue, especially in the neck and low back muscles [4]. In addition, physical activity has an influence on several cognitive tasks [5] and, therefore, it can be seen as a significant contributive factor to operative readiness and flight safety not only to a HPA pilot but also to entire operative organizations.
It is a common view that the level of physical fitness reflects health status and performance capability in various activities. Particularly, weak trunk muscles appear to be associated with persistent low back pain (LBP), while good isometric endurance of the back muscles seems to prevent the occurrence of LBP among the general working-age population [6]. Respectively, adequate isometric back endurance seems to have a protective role in LBP among military pilots [7], while HPA pilots with physically active sports backgrounds are less likely to be limited to fly due to spinal disorders [8].
Despite the physically demanding high acceleration work environment, no previous studies have investigated effects of physical training during the Air Force Academy (AFA) on maximal strength and muscle endurance among HPA pilots. We were able to find three studies [9,10,11] investigating changes in physical fitness among army or air force cadets with longitudinal designs. Among these studies, Harwood et al. [11] reported improved fitness, strength and muscular endurance during the Commissioning Course in British Army Cadets. Daniels et al. [10], who investigated changes in maximal isometric strength, found significant changes only in upper torso strength in a one-year follow-up among US Army Cadets. A study by Aandstadt et al. [9] was the only study conducted on Air Force cadets. However, their study [9] only investigated the change in aerobic fitness (VO2max), not in maximal muscle strength or endurance.
The primary purpose of the present study was to investigate muscular fitness, particularly maximal muscle strength and endurance and the basic somatic characteristics among military pilot cadets between the first and second year of their studies in the Air Force Academy (AFA) in the Finnish Air Force (FINAF).

The study subjects (n = 182) were AFA male cadets from 10 different cadet courses between the years of 2007 and 2016. Their mean (±SD) age was 20.6 (±0.6) years at baseline and their mean body mass, height and body mass index (BMI) were 76.4 (±7.2) kg, 180.0 (±5.1) cm and 23.6 (±1.8) kg/m2, respectively, at the time of the initial tests. The tests were conducted during the AFA’s physical education course (PEC) for military pilot cadets. Only cadets who were in fighter pilot training were included and thus other FINAF cadets were not included. The average number of participants was 19 per year, ranging from 15 (2007) to 23 (2008) cadets per year. A total of nine cadets could not participate on the second PEC due to common injuries or illnesses i.e., flu-like symptoms. The Ethical Committee of National Defence University in Finland has approved this study (identification code: CK11847).

This study was a longitudinal study with one-year follow-up. The baseline tests were conducted during the first year of AFA studies and the follow-up tests a year after. The testing was conducted in PEC, which is a one-week course including not only physical fitness tests but also occupational physical education with individually tailored exercise programs. The testing protocol included three maximal isometric muscle strength tests and two dynamic muscle endurance tests.

Prior to all muscle strength tests, the cadets performed a standardized 20 min warm-up. This included light jogging for the first five minutes followed by core and mobility exercises guided by a physiotherapist. The tests were carefully introduced to the subjects and in all tests, verbal encouragement was given to each subject.
Maximal isometric trunk flexion and extension were performed in the standing position, face towards the aperture and the wall, while the flexion test was done in the same aperture, standing, but in the opposite direction (face away from the wall). There is detailed description of the procedure in our previous study [12]. The measurement was recorded by an isometric electromechanical strain-gauge dynamometer (Digitest Ltd., Oulu, Finland). The hips were fixed at the level of the anterior superior iliac spine. The strap was tightened around the shoulders just below the axillary region and horizontally connected to the dynamometer by a steel chain. Two trials were performed for each subject and the better result was selected for further analysis. The duration of maximal pull against the strap was held for 3–5 s and performed twice with 30–60 s rest between the trials.
Maximal isometric bilateral strength of the leg extensor muscles was measured on an electromechanical dynamometer. The subject was positioned sitting on the bench with his back firmly fixed into the backrest and hands on the handles. The subjects placed their feet on the resistance stand at the base of the sledge. The knee angle was set to 90 degrees using a goniometer. The maximal push towards the leg stand was held for 3–5 s and performed twice with 30–60 s rest between the sets. The produced force was recorded by an isometric strain-gauge dynamometer. A minimum of two trials were performed for each subject and the best result was selected for further analysis.
All methods (trunk flexion, extension and leg extension measurements with electromechanical dynamometer) are well documented and used in previous studies [12]. The reproducibility of measurements of maximal isometric muscle force is high (r = 0.98, C.V. =4.1%) [13]. Moreover, the device used in the study had been regularly calibrated. Finally, overall maximal muscle strength in the present study refers to the results of these three measurements (leg extension and trunk flexion and extension).

A modified three stage sit-up test was used to measure muscle endurance of the core (especially abdominal and hip flexor) muscles. The three-stage sit-up test has been used with population-level studies [14]. In this test, the subject assumed a supine position on a mat with the knees at 90 degrees and feet flat on a mat where they stayed throughout the test. For the first ten repetitions, the subject placed his hands on the thighs and curled up until the hands reached the kneecaps. For the next ten repetitions (from 11 to 20), the subject had the hands across the chest and during the third set (from 21 to 30 repetitions) the subject pinched his ears. The assistant held the subject’s feet on the ground on these first three sets (repetitions from 1–30). Respectively, in the next three sets, repetitions from 31–40, 41–50 and 51–70 were done in the same way with the exception that the assistant was not holding the feet and the last set consisted of 20 instead of 10 repetitions. The subject sat up to full sitting position and then returned back to the floor (back of the head touching the floor) and continued to perform a maximum of 70 sit-ups. The test was stopped if the subject could not sit up or the feet were not touching the floor in the last 40 repetitions.
A seated alternative dumbbell press was used for measuring upper body muscle endurance. In this test, the subject held a 10 kg dumbbell in each hand at the shoulder level. The subject alternately raised the dumbbells from their shoulders with palms facing side and elbows pointing forward to full extension of elbow. Only one hand was allowed to move each time and no leaning forward or jerking the weight during the movement was allowed.

Standard statistical methods were used for the calculation of the descriptive statistics (means and standard deviations) with the analysis of normal distribution in each variable. Statistical analyses between the initial and the second test were normally distributed and done using Student´s paired t-test. The changes between baseline and follow-up tests in fitness variables were not normally distributed and therefore correlations were done using Spearman correlations. Effect sizes were assessed by calculating differences of means (post–pre) divided by baseline standard deviation (pre). Statistical significance was accepted at p < 0.05. SPSS statistic (version 24) (IBM Corp., Armonk, NY, USA) commercial computer program was used in statistical analysis.

In conclusion, the FINAF cadets’ muscular fitness improved between the first and the second year of their studies. It seems that physical education in the early phase of academy studies has positive effects on muscular fitness among pilot cadets. In addition, physical training programming should also be implemented on a regular basis through the career of a pilot. 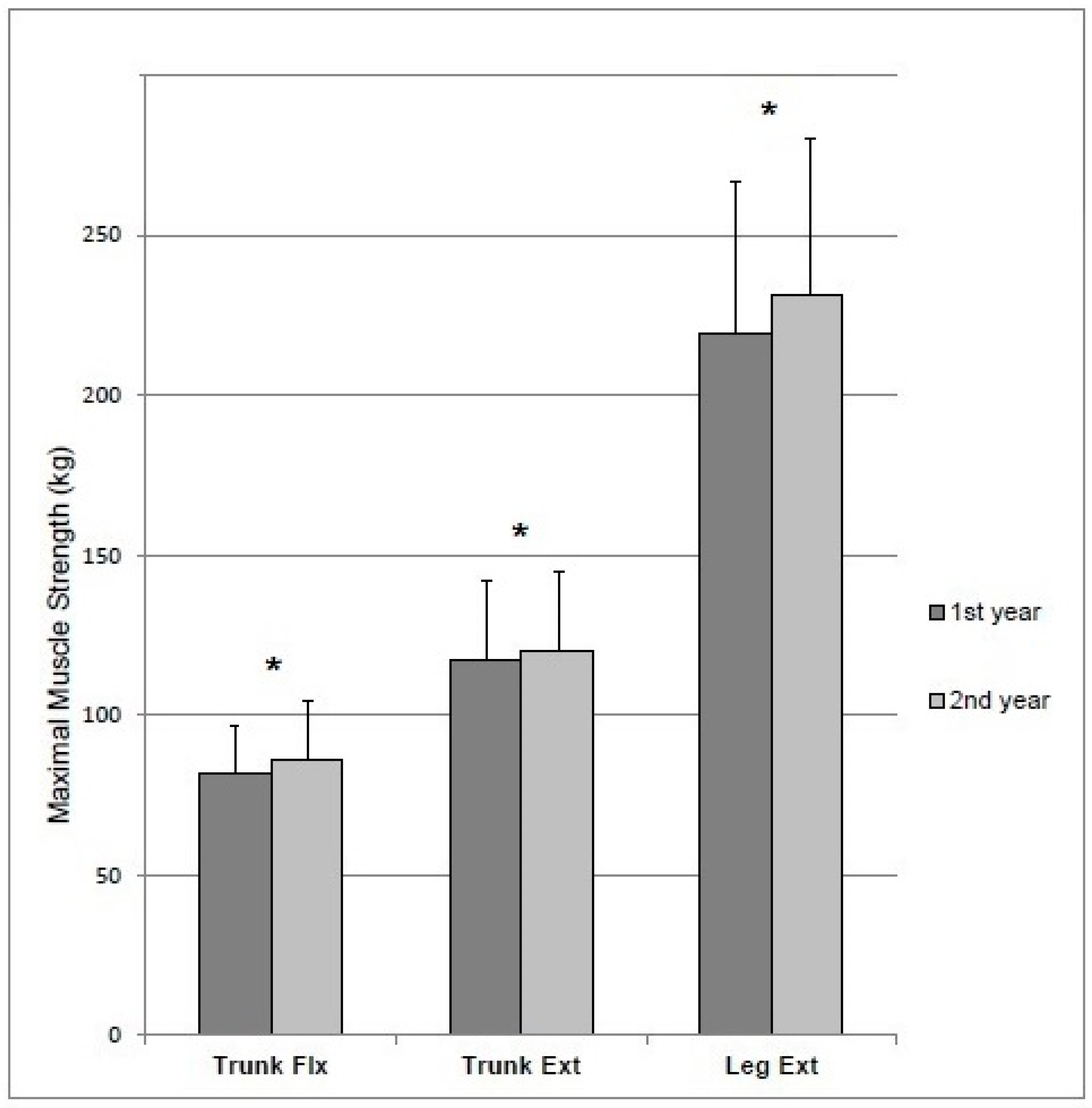 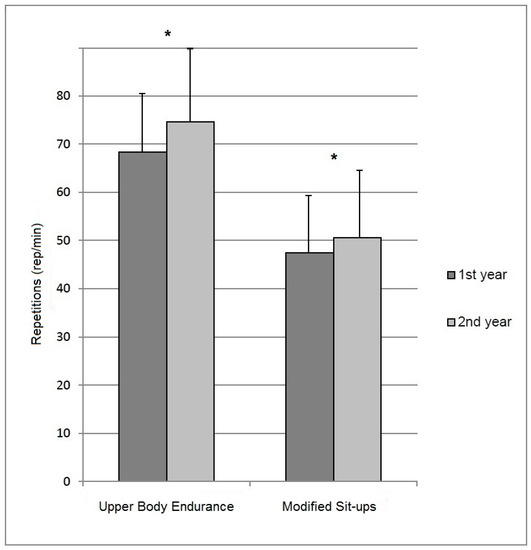