Background: An adequate level of muscular fitness is related to occupational performance in military personnel, including pilots flying high performance aircraft. The aim of this study was to describe the baseline level and the change in muscular fitness between the first and the second years of the Air Force Academy among fighter pilot cadets. Methods: The muscular strength and endurance test results of 182 male fighter pilot cadets were analyzed during their first year in the Air Force Academy and one year after. Maximal isometric strength tests included trunk flexion, trunk extension and bilateral leg extension tests, whereas muscle endurance was measured with modified a sit-up test and seated alternative dumbbell press. Results: The maximal isometric bilateral strength of the leg extensor muscles increased from 220 ± 42 to 232 ± 42 kg. The maximal isometric trunk extension strength increased from 117 ± 21 to 120 ± 19 kg and trunk flexion from 82 ± 16 to 86 ± 17 kg. Muscle endurance increased from 68 ± 13 to 75 ± 15 repetitions/min in seated dumbbell press and from 47 ± 12 to 51 ± 13 repetitions/min in sit-up test. Conclusions: Both maximal strength and muscular endurance improved among fighter pilot cadets, which indicates that occupational performance is well maintained or improved from the perspective of physical fitness during the early phase of academy studies. Education in the Air Force Academy, including physical education, seems beneficial in improving muscular fitness among military pilots. View Full-Text
Keywords: muscular fitness; fighter pilot; military aviation muscular fitness; fighter pilot; military aviation
►▼ Show Figures 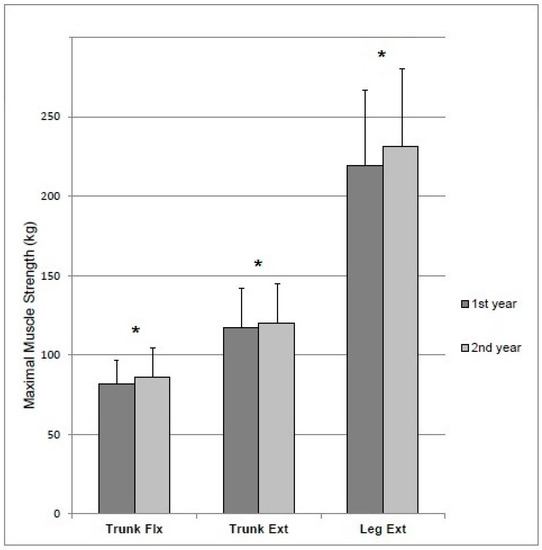