The importance of health-promoting neighborhoods has long been recognized, and characteristics of local built environments are among the social determinants of health. People with disability are more likely than other population groups to experience geographic mobility and cost restrictions, and to be reliant on ‘opportunity structures’ available locally. We conducted an ecological analysis to explore associations between area-level disability prevalence for people aged 15–64 years and area-level built environment characteristics in Australia’s 21 largest cities. Overall, disability was more prevalent in areas with lower walkability and lower local availability of various neighborhood amenities such as public transport, healthier food options, public open space, physical activity and recreation destinations and health and mental health services. These patterns of lower liveability in areas of higher disability prevalence were observed in major cities but not in regional cities. Our findings suggest that geographically targeted interventions to improve access to health-enhancing neighborhood infrastructure could reduce disability-related inequalities in the social determinants of health.
Keywords: disability; liveability; social determinants of health; accessibility; geographic variation disability; liveability; social determinants of health; accessibility; geographic variation

To address our research questions, we used area-matched data from two sources: (i) the 2016 Australian Census of Population and Housing and (ii) spatial indicators of built environment characteristics for Australia’s 21 largest cities. The Australian Census is conducted by the Australian Bureau of Statistics (ABS) every five years and since 2011 it has included questions about disability, as described below. Census data are available for analysis at different levels of geographic aggregation. This makes it possible to conduct analyses exploring spatial associations between disability prevalence and other factors of interest for which sources of geocoded data are available, such as service locations [52,53]. The spatial indicators have been theoretically informed and empirically-tested with Australian adults [29].

Our outcome was area-level prevalence of disability among people aged 15–64 years, sourced from the 2016 Australian Census of Population and Housing. The Census includes a ‘need for assistance with core activities’ module, comprising a set of four questions to identify people requiring assistance with self-care, mobility and/or communication due to a disability, long term health condition or the effects of old age [54]. We calculated disability prevalence as individuals with a core activity need for assistance as a percentage of all those who responded to this module; individuals who did not respond were excluded from the calculation of disability prevalence. Data were extracted using Census TableBuilder (Australian Bureau of Statistics, Canberra ACT, Australia) [55,56].
We chose to focus on disability prevalence in the population aged 15 to 64 years because this is the age range commonly referred to as ‘working age’. As well as the expectation that a high proportion of people with disability between the ages of 15 and 64 years will be in the labor force, many disability-specific services such as Disability Employment Services are targeted to people in this age group. Disability prevalence increases steeply in older age groups due to disability acquisition associated with ageing [57]. Compared with people of working age, it may be expected that both adults in older age groups and children aged under 15 have different types and patterns of interaction with their local environment, and important built environment features for health and wellbeing may differ.

Exposures were spatially-derived built environment indicators for local areas within Australia’s 21 largest cities, covering 80% of the Australian population aged 15–64 years; the remaining 20% live in rural and remote areas for which these data were not available. Data for built environment characteristics were produced by the Healthy Liveable Cities Group in the Centre for Urban Research, RMIT University, using an Esri geographic information system (GIS) (ArcGIS Desktop 10.6, Version 10.6.0.8321, License: Advanced; Esri, Redlands CA, USA) and a Postgres database (PostgreSQL version 9.2.4, Server version 9.6; PostgreSQL Global Development Group). Each indicator was initially calculated for individual sample points (or ‘dwellings’, identified as unique address locations within residential zoned urban areas), then aggregated to provide summary measures at larger administrative geographic scales. Distances were calculated as the length of road network walkable by pedestrians from the sample point to the destination.
Data for this study were obtained for 27 built environment measures relating to food environment (six measures), social infrastructure services (13 measures), walkability (five measures), public open space (two measures) and public transport (one measure). From the initial list of 27 built environment characteristics, 18 were selected to examine associations with disability prevalence. Based on an evaluation of correlation coefficients and indicator definitions, we selected two food environment indicators and one indicator each for walkability and proximity to open space (see Tables S1–S3 in Supplementary File for correlation coefficients).
Appendix Table A1 describes how the 18 indicators selected for analysis were scored. Further detail on the calculation of the built environment indicators is available in the Australian Urban Observatory [58].

Statistical Area Level 2 (SA2) was the geographic level of aggregation used for examining associations between built environment characteristics and disability prevalence. This spatial unit is defined within the Main Structure of the ASGS, a hierarchical structure produced by the Australian Bureau of Statistics to enable the publication of statistics that are comparable and spatially integrated. With an average population of approximately 10,000 people, SA2s are designed to reflect functional areas that represent a community that interacts together socially and economically [60]. We selected SA2 as the geographic unit of analysis rather than the smaller SA1 unit (population between 200 and 800 people). Disability prevalence at the SA1 level was not sufficiently reliable due to the small number of people with disability in some SA1s. The larger SA3 geographic unit (population between 30,000 and 130,000 people) did not provide sufficient granularity to answer our research questions. We excluded 12 SA2s for which fewer than 500 people aged 15–64 years responded to the Census’ ‘need for assistance with core activities’ module.

We conducted a descriptive analysis to report the central tendency and spread of built environment exposures and outcomes and analyzed associations between built environment characteristics and disability prevalence in three steps.
Step 1: For parsimony, we selected fewer built environment characteristics from the available list to qualify as independent exposures. To achieve this, within each group of indicators with two or more qualitatively similar indicators (i.e., food environment, walkability and proximity to public open space), we examined correlations to identify those likely to capture similar constructs. For pairs of indicators, the higher the correlation coefficient, the more likely it is that one indicator variable will predict the other. Therefore, where indicators showed high correlation, we selected the one identified as the most comprehensive and adequate based on the definition.
Step 2: After testing the assumption of normality for disability prevalence, separate linear regression models were fitted for each exposure selected in Step 1 and disability prevalence. Regression models were fitted with transformation of z-score standardized values of each exposure. Z-score standardization made it possible to compare the magnitude of association across exposures using a common scale.
Step 3: To examine effect modification by city type, for each exposure for which we found an association with disability prevalence in Step 2, an interaction term was fitted between exposure and city type using regression models. Where significant interaction terms were observed, we stratified the regression analyses to examine for variations in the association by city type.
All analyses were carried out in Stata v16 (Stata Statistical Software: Release 16. College Station, TX: StataCorp LLC).

Ethical approval was not required for this study.

This research was funded by the Australian National Health and Medical Research Council Centre of Research Excellence in Disability and Health grant APP1116385.

The authors gratefully acknowledge the Healthy Liveable Cities Group in the Centre for Urban Research, RMIT University, for providing the liveability indicator data for use in this study. Special thanks to Rebecca Roberts for providing the map displaying the 21 cities. H.B. is supported by an RMIT Vice-Chancellor’s Senior Research Fellowship. 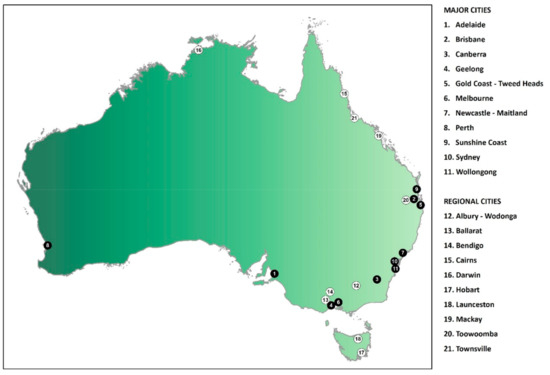 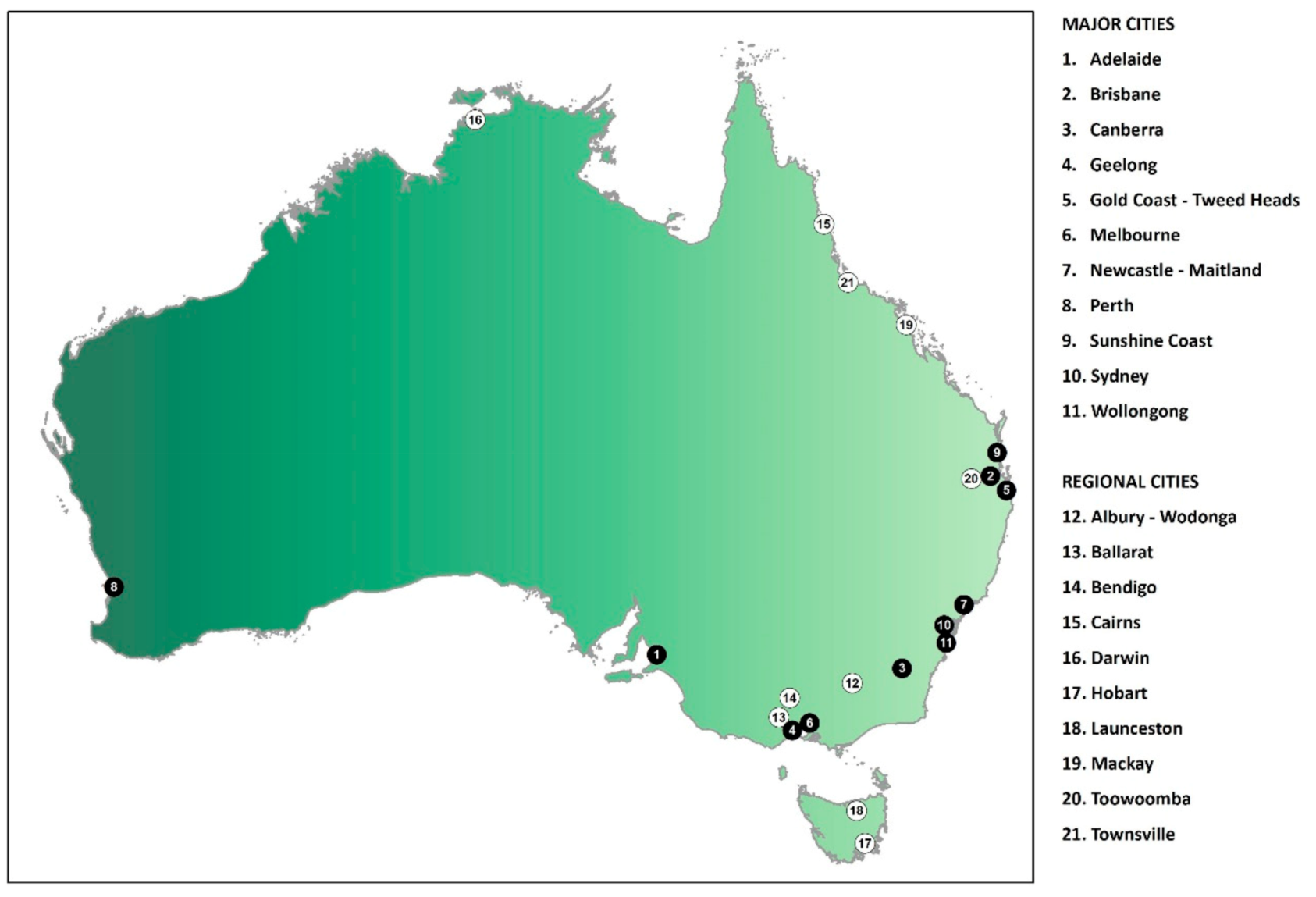