#Antivaccination on Instagram: A Computational Analysis of Hashtag Activism through Photos and Public Responses

A dramatic increase has been registered in the number of social media posts in photo form as well as in hashtag activism. Hashtags, which manifest thoughts and feelings clearly and concisely, originated on Twitter, where the length of a post is limited; their use, however, has expanded into other social media services, including Instagram. Hashtags, which make it easy to find and express support for posts of interest, have been widely used for online activism, although they have been criticized for fostering confirmation bias. Moreover, hashtag activism in photo form has been relatively understudied. This research analyzed Instagram photos with antivaccination hashtags as an example of hashtag activism through photos. In addition, we examined how the photo features were related to public response, which was manifested via engagement and comment sentiment. The results suggest that the photos which were categorized into “text” took the largest share. It was also found that the major way of claiming was to imprint key messages that persuade people not to vaccinate with remarks from professionals on photos and provide a source of supporting information in the post text with hashtags of antivaccine intention. Various photo features showed associations with engagement and comment sentiment, but the directions of correlation were usually the opposite: these results suggest that engagement and comment sentiment are separate domains that reveal different public responses. View Full-Text
Keywords: antivaccination; Instagram; hashtag activism; Microsoft Azure Cognitive Services; engagement; comment sentiment antivaccination; Instagram; hashtag activism; Microsoft Azure Cognitive Services; engagement; comment sentiment
►▼ Show Figures 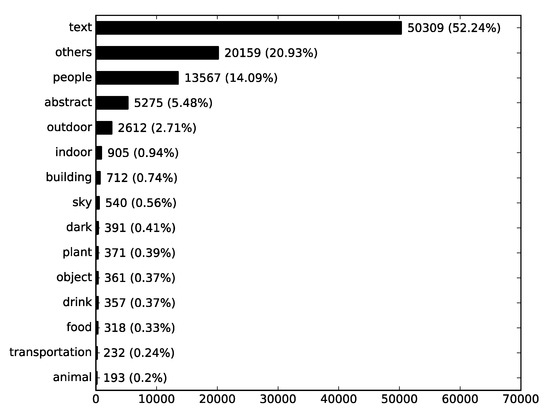