A Comprehensive Assessment of the Associations Between Season of Conception and Birth Defects, Texas, 1999–2015
Previous Article in Journal

Groundwater is a critical resource in India for the supply of drinking water and for irrigation. Its usage is limited not only by its quantity but also by its quality. Among the most important contaminants of groundwater in India is arsenic, which naturally accumulates in some aquifers. In this study we create a random forest model with over 145,000 arsenic concentration measurements and over two dozen predictor variables of surface environmental parameters to produce hazard and exposure maps of the areas and populations potentially exposed to high arsenic concentrations (>10 µg/L) in groundwater. Statistical relationships found between the predictor variables and arsenic measurements are broadly consistent with major geochemical processes known to mobilize arsenic in aquifers. In addition to known high arsenic areas, such as along the Ganges and Brahmaputra rivers, we have identified several other areas around the country that have hitherto not been identified as potential arsenic hotspots. Based on recent reported rates of household groundwater use for rural and urban areas, we estimate that between about 18–30 million people in India are currently at risk of high exposure to arsenic through their drinking water supply. The hazard models here can be used to inform prioritization of groundwater quality testing and environmental public health tracking programs. View Full-Text
Keywords: groundwater; arsenic; India; machine learning; geospatial modeling; random forest groundwater; arsenic; India; machine learning; geospatial modeling; random forest
►▼ Show Figures 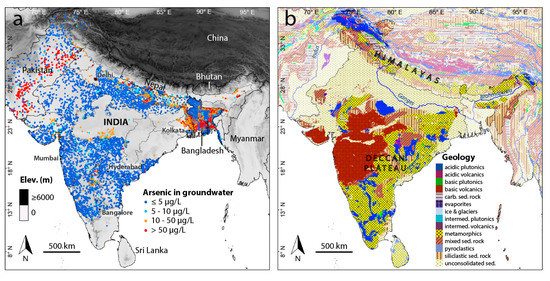