Background: Statistical parametric mapping (SPM) is an innovative method based on the analysis of time series (data series) and is equivalent to statistical methods for numerical (discrete) data series. This study aimed to analyze the patterns of movement in the topspin backhand stroke in table tennis and to use SPM to compare these patterns between advanced female and male players. Methods: The research involved seven advanced male and six advanced female players. The kinematic parameters were measured using an inertial motion analysis system. The SPM was computed using the SPM1D Python package. Results: Our study made it possible to reproduce the pattern of movement in the joints during topspin backhand strokes in the studied athletes. During multiple comparisons, the analysis of variance (ANOVA) SPM test revealed many areas in the studied parameter series with statistically significant differences (p ≤ 0.01). Conclusions: The study presents the movement patterns in the topspin backhand shot and describes the proximal-to-distal sequencing principle during this shot. The SPM study revealed differences between men and women in the contribution of thoracic rotation, external shoulder rotation, dorsal flexion, and supination in the wrist during the hitting phase. These differences may result from the anatomical gender differences or variations in other functionalities of individual body segments between the study groups. Another possible source for these discrepancies may reside in tactical requirements, especially the need for a more vigorous attack in men. The gender differences presented in this study can help in the individualization of the training process in table tennis. View Full-Text
Keywords: statistical parametric mapping; gender differences; movement pattern; kinematics; table tennis; sports technique statistical parametric mapping; gender differences; movement pattern; kinematics; table tennis; sports technique
►▼ Show Figures 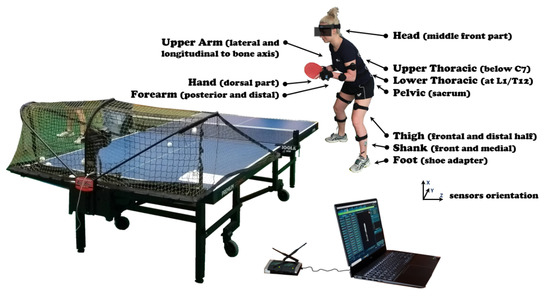