Perceptions, Predictors of and Motivation for Quitting among Smokers from Six European Countries from 2016 to 2018: Findings from EUREST-PLUS ITC Europe Surveys
Previous Article in Journal

The WHO and UNICEF Joint Monitoring Programme (JMP) Indicators for Water Supply, Sanitation and Hygiene and Their Association with Linear Growth in Children 6 to 23 Months in East Africa

The slow decrease in child stunting rates in East Africa warrants further research to identify the influence of contributing factors such as water, sanitation, and hygiene (WASH). This study investigated the association between child length and WASH conditions using the recently revised WHO and UNICEF (United Nations Children’s Fund) Joint Monitoring Programme (JMP) indicators. Data from households with infants and young children aged 6–23 months from the Demographic and Health Surveys in Burundi, Ethiopia, Kenya, Malawi, Rwanda, Tanzania, Uganda, and Zambia were used. Associations for each country between WASH conditions and length-for-age z-scores (LAZ) were analyzed using linear regression. Stunting rates were high (>20%) reaching 45% in Burundi. At the time of the most recent Demographic and Health Survey (DHS), more than half of the households in most countries did not have basic or safely managed WASH indicators. Models predicted significantly higher LAZ for children living in households with safely managed drinking water compared to those living in households drinking from surface water in Kenya (β = 0.13, p < 0.01) and Tanzania (β = 0.08, p < 0.05) after adjustment with child, maternal, and household covariates. Children living in households with improved sanitation facilities not shared with other households were also taller than children living in households practicing open defecation in Ethiopia (β = 0.07, p < 0.01) and Tanzania (β = 0.08, p < 0.01) in the adjusted models. All countries need improved WASH conditions to reduce pathogen and helminth contamination. Targeting adherence to the highest JMP indicators would support efforts to reduce child stunting in East Africa.
Keywords: water quality; sanitation; hygiene; stunting; East Africa water quality; sanitation; hygiene; stunting; East Africa

Poor growth during the first thousand days leads to negative consequences ranging from decreased immunity to reduced academic performance in adulthood if not corrected early [1]. During the past two decades, child undernutrition rates have declined considerably due to the prioritization of the nutrition agenda worldwide. More specifically, global stunting rates for children under five decreased from 32.6% to 22.2% between 2010 and 2017 [2]. However, the reduction in child stunting in sub-Saharan Africa remained slow from 46.1% in 1970 to 40% in 2010 compared to the global reduction rate of 25.1% [3]. Therefore, the persisting high rates of stunting continue to be a public health concern in sub-Saharan Africa. Stunting rates remain especially high in the East African region where 39% of the children under five were stunted based on data from 2010 to 2016 [4].
Identifying determinants and addressing constraints related to child stunting are crucial in designing effective nutrition-specific and nutrition-sensitive interventions and policies needed for progress worldwide. Furthermore, the importance of the underlying factors of stunting may vary across countries and even across regions within a country [5]. Thus, further investigation of the contributing factors to malnutrition, such as inadequate water, sanitation, and hygiene (WASH) conditions and their role in child growth faltering is needed. Poor WASH practices have been associated with suboptimal child growth in sub-Saharan populations and globally [6,7,8]; and, improved WASH conditions have been accompanied by better child anthropometrics in several studies [6,7,9,10,11,12]. Figure 1 summarizes three pathways suggested to explain the role of unsafe WASH in child stunting. Repeated episodes of diarrhea and chronic helminth infections can reduce nutrient absorption leading to undernutrition [13,14]. Additionally, environmental enteric dysfunction (EED), widespread in areas with poor WASH indicators, has been suggested to cause impaired linear growth in children [15,16]. A pooled analysis from 140 countries reported that open defecation explained 54% of the height variation in children under the age of five [9]. Thus, inadequate WASH practices likely contribute to the slow reduction in child stunting rates in sub-Saharan Africa.
However, large cluster randomized trials recently reported no effect of individual or combined WASH interventions on linear growth in children under 5 years [18]. Moreover, compared to improved nutrition alone, there were no additional benefits of combining better WASH and nutrition on child length. Because of the high levels of pathogens reported from the children’s hands and in the drinking water, the low-cost and household-level WASH implemented in these studies may not have been sufficient to reduce pathogen contamination [18,19]. These results suggest that more elaborate and more specific WASH services may be needed to limit pathogen transmission from poor WASH practices. The UNICEF and WHO Joint Monitoring Programme for Water Supply, Sanitation and Hygiene (JMP) provides criteria for global standardized WASH indicators [20]. The indicators have been updated to include more detailed specifications, called “ladders”, within each category. These indicators can be used to monitor progress towards safe WASH conditions and in research analyses [20,21,22]. To our knowledge, there are limited studies examining links between WASH assessed with the newly refined JMP indicators and child stunting in the East African region.
To remedy the slow progress towards a reduction in child undernutrition in the region, further investigation of nutrition-sensitive as well as nutrition-specific factors contributing to the high prevalence of stunting in the East African region is critical. Analyzing the associations between the different levels of the JMP indicators and child length provides additional insights on the type of WASH interventions that may contribute most effectively to reducing stunting rates for each country. The purpose of this study was to evaluate the association between WASH conditions and child length in East Africa using nationally representative data. The results from this study can be used to adjust and prioritize future nutrition-sensitive policies and interventions to reduce childstunting in the region.

The latest nationally representative Demographic and Health Survey (DHS) data from eight East African countries: Burundi (2016–2017), Ethiopia (2016), Kenya (2015), Malawi (2017), Rwanda (2017), Tanzania (2017), Uganda (2016), and Zambia (2013–2014) were analyzed. Children aged 6–23 months with available data including anthropometric measurements, WASH indicators and maternal and household characteristics were included in the analyses. Sample sizes included for each country are presented in Table 1. The DHS data collections were approved by ICF International’s Institutional Review Board and by each host country’s ethics committee. Secondary and de-identified data were used in this study.

The primary outcome was child length-for-age z-scores (LAZ) based on the 2006 WHO Growth Standards [23].

The WASH indicators were based on the specifications of the WHO and UNICEF Joint Monitoring Programme for Water Supply, Sanitation and Hygiene (JMP) [20]. Details of each JMP ladder are summarized in Table 2. Each household was given a rank in ascending order from zero to four for water and for sanitation based on quality, access, and availability of the facilities or services. The safely managed water category did not include free of fecal and microbial contaminations as these data were not available. Not all of the households included in the surveys were asked questions regarding child or adult feces disposal; thus, the “safely managed” step of the sanitation ladder was excluded. The hygiene indicator was ranked from zero to two for each household. Higher indicator scores represent better WASH conditions.

Weighted means and frequency distributions were used to describe the study population taking into consideration the clustering due to survey design. Indicators within each JMP ladder were treated as categorical variables. Linear regression models assessed the association between JMP WASH indicators and child LAZ for each country individually. First, unadjusted models were fitted (Model I). Then, models were adjusted for child, maternal, and household covariates in Model II. Additional adjustment with the other WASH indicators was conducted to establish the contribution of individual WASH indicators to child length in Model III. A significance level of 5% was set for the models. Households with missing values for WASH indicators were not included in the analyses. Statistical analyses were conducted with SAS 9.4 (SAS Institute, Cary, NC, USA). Because most of the households in Kenya, Rwanda, and Zambia were not asked questions related to handwashing, associations between hygiene and child length could not be modeled for those three countries.

3.1. Characteristics of the Study Populations

Stunting rates were high (>20%) in all countries with the highest stunting rate in Burundi (45%) (Table 3). Maternal education levels were remarkably different across the eight countries. In Ethiopia, 60.5% of mothers had not received any formal education while this category was less than 12% in five of the eight countries. Ethiopia (35.2%) had the highest proportion of households in the lowest quintile of wealth index while Tanzania had only 14.4% in the lowest quintile. Lastly, most of the households surveyed across countries lived in rural areas.
In all countries except Burundi and Kenya, more than half of the population were classified as not having access to basic or safely managed drinking water sources according to the JMP standards (Table 3). Kenya had the highest proportion of the population with safely managed water sources (32.6%) and Rwanda had the lowest (9.6%). Open defecation was common in Ethiopia (36.4%) but low in Burundi (2.2%) and Rwanda (3.5%). More than half of the households in Burundi, Malawi and Rwanda had improved sanitation facilities compared to only 9% in Ethiopia.
Ethiopia (45.2%) and Uganda (39.7%) had the highest proportion of households with no handwashing facilities (Table 3). For most of the other countries with available data, households had limited hygiene facilities with a place for handwashing but without soap and water.

Even though WASH indicators were noticeably different across East African countries, better WASH conditions generally were associated with improved child length. The influence of water and sanitation on linear growth varied across countries. Certain WASH indicators were more important than others for different countries. This study emphasizes the importance of environmental conditions on child nutritional status during the first 1000 days. Priority needs to be given to more comprehensive and context-specific WASH interventions where child stunting rates are persistently high.

This research received no external funding but was supported by funds from the Marilynn Thoma Chair in Human Sciences at Oklahoma State University. 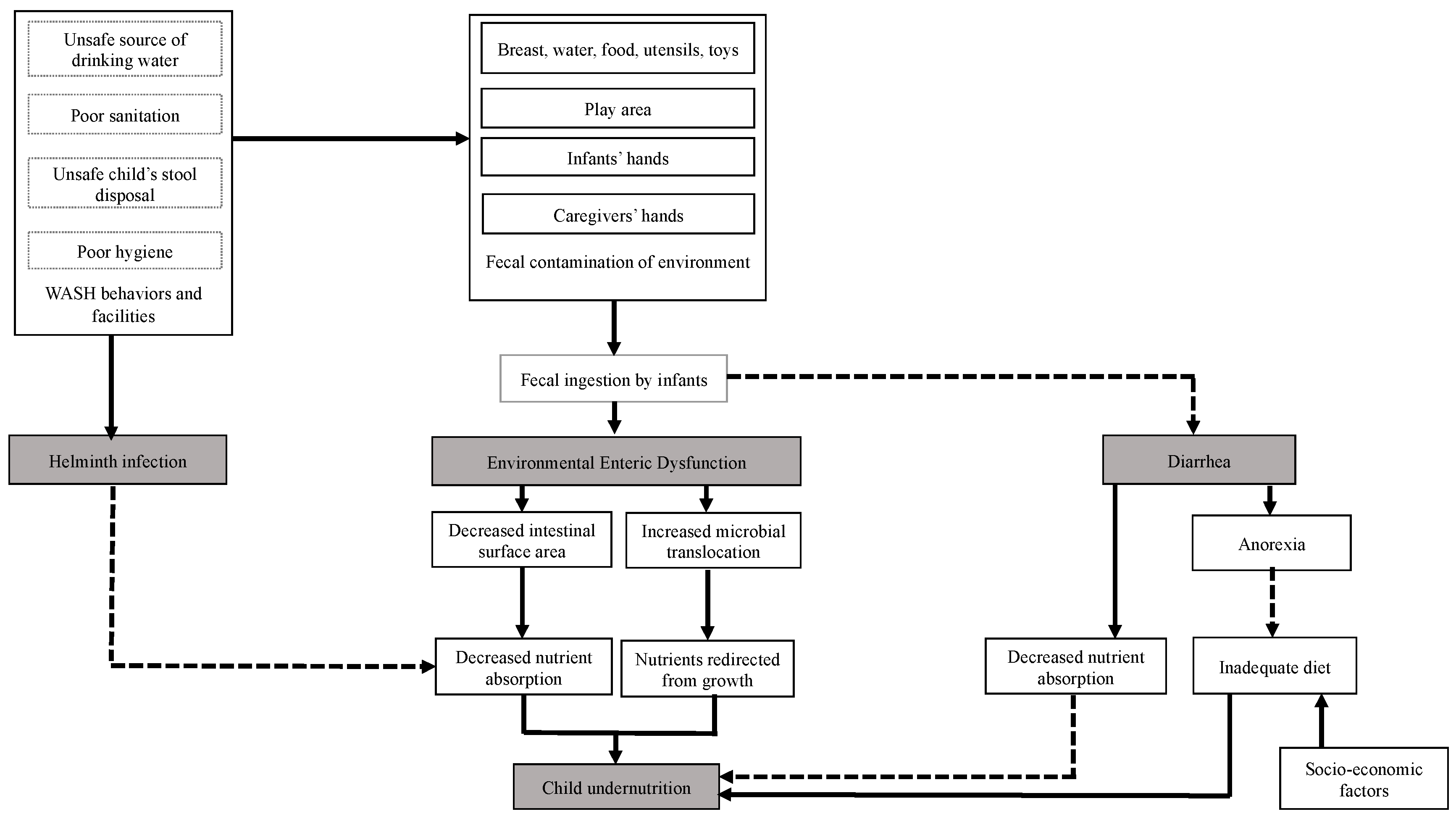