Acceptability of AAI from the Perspective of Elderly Clients, Family Members, and Staff—A Pilot Study
Previous Article in Special Issue

This study aimed to explore the set of variables related to skeletal muscle mass (SMM) in both sexes, and to create age- and sex-related models of changes in SMM, using the most representative indicator of muscular status. Body composition was assessed in 8733 subjects (♀ = 3370 and ♂ = 5363), allocated into subsamples according to age: 18–29.9, 30–39.9, 40–49.9, 50–59.9, 60–69.9, and 70.0–79.9 years. Nine variables were used: protein mass, protein percent, protein mass index, SMM, percent of SMM, SMM index, fat-free mass, fat-free mass index, and protein/fat index. Univariate and multivariate analysis of variance (ANOVA and MANOVA) were used to determine between- and within-sex difference in all variables by age. Correlation analysis established the relationship between age and muscularity variables. Principal Component Analysis extracted the variables that loaded highest in explaining muscularity, while regression analysis determined the linearity of association between the age and indicators of muscular status. Variables SMMI and PSMM were extracted as the most sensitive to age, with SMMI being gender-independent while showing the parabolic and sinusoidal form of change as function of ageing in males and females, respectively; and PSMM being sex-dependent while showing a linear trend of decrease in both sexes. View Full-Text
Keywords: proteins; skeletal muscle loss; sarcopenia; physical activity; quality of life proteins; skeletal muscle loss; sarcopenia; physical activity; quality of life
►▼ Show Figures 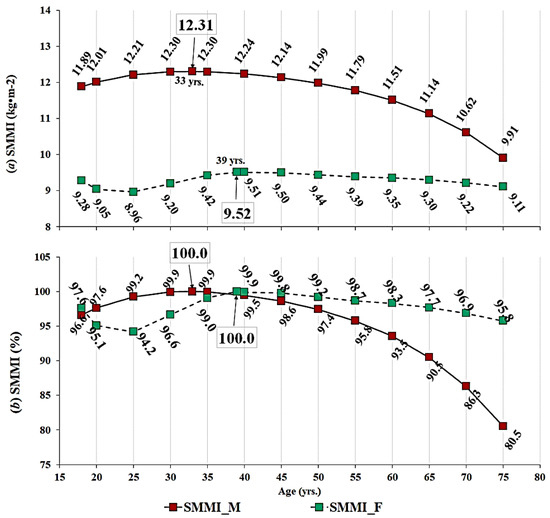