I Want to Become a Registered Nurse as a Non-Traditional, Returning, Evening, and Adult Student in a Community College: A Study of Career-Changing Nursing Students
Next Article in Special Issue

Being Heard, Exerting Influence, or Knowing How to Play the Game? Expectations of Client Involvement among Social and Health Care Professionals and Clients
Previous Article in Special Issue

The Impact of Device Settings, Use Patterns, and Flavorings on Carbonyl Emissions from Electronic Cigarettes

Carbonyl compounds are the most abundant toxic chemicals emitted from electronic cigarettes (e-cigarettes) [1,2,3,4]. Among the carbonyls found in e-cigarette emissions (e-vapor), two of the major carbonyls (i.e., formaldehyde and acetaldehyde) are known human carcinogens [5]. Glyoxal, which is known to cause allergic reactions, was also found in e-vapor [6]. Several flavoring carbonyls in e-liquids (e.g., vanillin, cinnamaldehyde) have shown increased cell toxicity [7,8]. It is also worth mentioning that 2,3-butanedione (diacetyl) and 2,3-pentanedione (acetylpropionyl) were found in e-vapors with ‘buttery’ flavored e-liquids [9] which are known to cause bronchiolitis obliterans (aka ‘popcorn lung’) [10]. However, factors affecting carbonyl emissions from e-cigarettes are still not fully understood. Most current studies report that higher e-cigarette power outputs significantly increase formaldehyde and acetaldehyde emissions [11,12,13,14,15,16,17]. However, there is a 1000-fold difference across the literature in formaldehyde emission rate data from e-cigarettes at comparable e-cigarette device power outputs [12,13,14], suggesting that carbonyl emissions are not dependent on e-cigarette power output alone and that other factors should be considered.
Among the potential other factors, flavoring agents used in e-liquids could be sources of potentially harmful carbonyl emissions. Thermal fragmentation of flavoring chemicals has been shown to form carbonyls under the burning temperatures of conventional cigarettes [18], but the contribution of flavoring chemicals to carbonyl emission has not been sufficiently studied for e-cigarettes [19,20]. In addition, some flavored e-liquids and e-vapors contain chemicals [e.g., diacetyl and acetylpropionyl] that can be toxic at sufficient levels [7,8,9]. However, levels of the potentially harmful chemicals in e-vapor resulting from flavoring additives were not fully accessed under e-cigarette vaping topography [9].
The contribution of e-liquid base materials to carbonyl emissions is also largely unknown. It has been shown that thermal degradation of vegetable glycerin (VG) and propylene glycol (PG), the main base materials used in e-liquids, generates various carbonyl compounds [15,21]. However, the thermal degradation of VG and PG has not been studied across a wide range of e-cigarette coil temperatures [14,16,22] even though coil temperature is an important determinant of e-cigarette carbonyl emissions [13].
E-cigarette vaping topography (i.e., puff volume and duration) could also potentially affect carbonyl formation. Vaping topography can affect carbonyl emissions by modifying e-cigarette heating coil temperatures [23]. However, most of the previous studies examining e-cigarette carbonyl emissions could not mimic actual e-cigarette user’s behavior [12,13,15,24,25]. Those studies generated e-vapors similar with the ‘Health Canada Intense (HCI) Regime’ (55 mL puff volume, 2 s puff duration, every 30 s) which was developed for conventional cigarette smokers and not e-cigarette vapors [26]. Therefore, real-world vaping topography should be used to study carbonyl emissions. In addition, most of the preceding studies only focused on formaldehyde and acetaldehyde emissions. However, other potentially harmful carbonyl compounds, such as acrolein and glyoxal, in e-vapor also need to be evaluated under real-world vaping conditions.
To address these knowledge gaps, this study evaluated the impacts of real-world vaping conditions (i.e., real-world e-cigarette heating power, vaping topography, and e-liquid components) on the emission of six potentially harmful carbonyls (i.e., glyoxal, formaldehyde, acetaldehyde, acrolein, diacetyl, and acetylpropionyl) and thirteen additional carbonyl species described below.

E-vapors were generated based on the protocols used in our previous studies [27,28,29]. In brief, vaping topographies of 23 current e-cigarette users measured in our lab. Vaping topographies (i.e., puff volume, duration, and interval) were measured using a CReSS Pocket device (Borgwaldt KC Incorporated, North Chesterfield, VA, USA) [30] with the Rutgers’ IRB approval (Pro20140000589). Demographic data of the study participants, observed vaping topographies, device settings, and e-liquid compositions from the users are summarized in Tables S1 and S2.
The wide ranges of experimental conditions were used reflecting real-world vaping conditions (Table 1). Throughout the experiments, the median values of the observed power output (6.4-watt), puff volume (90 mL), and puff duration (3.8 s) were used. The selected vaping topography was consistent with the median value of the reported e-cigarette vaping topographies, which was 91 mL puff volume (ranging from 51 to 133 mL) and 3.8 s puff duration (ranging from 2.65 to 4.3 s) [8,31,32,33,34,35,36,37]. Square-shaped vaping pattern was used (Figure S1) instead of bell-shaped topography which is used for cigarette smoking.
A variety of e-liquids were prepared to assess the impact of e-liquid compositions on carbonyl formation. Freshly prepared e-liquids in our lab were used in all experiments for quality control purposes because large variability in commercial products were reported in a previous study [38]. E-liquids used in our study were composed of vegetable glycerin (VG, USP grade, J.T. Baker, Phillipsburg, NJ, USA), propylene glycol (PG, USP grade, Sigma-Aldrich, St. Louis, MO, USA), (-)-nicotine (≥99.0%, Sigma-Aldrich), and flavoring agents (The Perfumer’s Apprentice, Scotts Valley, CA, USA). Three base materials, 100% VG, PG:VG mixture (v/v = 1:1), and 100% PG e-liquids, containing 12 mg/mL nicotine were tested to evaluate the impact of e-liquid base material on carbonyl formation. Then, eight flavored e-liquids (strawberry, dragon fruit, menthol, sweet cream, Bavarian, cinnamon, bubble gum, and graham cracker) were used to generate e-vapors to evaluate the impact of flavoring agents on carbonyl formation. These eight flavoring agents selected are the most frequently used ones in e-liquid recipes on the market [39]. The flavored e-liquids in the experiments were prepared by adding 10% of flavoring agents (1% for the cinnamon flavor) in VG by volume ratio. The chemical components of the flavoring agents were not fully disclosed but all of them were consisted of natural/artificial flavorings in PG as a main solvent (see more information in Supporting Information). All the e-liquids were prepared freshly before the day of experiments and sat overnight for stabilization. The e-liquid preparing procedures were consulted by local vape shop owners.
The device used in this study was a versatile refillable tank type e-cigarette which contained replaceable Nichrome heating coils (dual-bottom coils with 0.8 Ω resistance) and was obtained from an e-cigarette retailer (The Council of Vapor, Walnut Creek, CA, USA). Two types of battery boxes, an Apollo Valiant battery (Apolo E-cigarette, Concord, CA, USA) and a Sigelei-100W battery (Sigelei US, Pomona, CA, USA), were used to provide a wide range of power outputs from 3 to 80 watts. To test the impact of device power output settings and vaping topographies on carbonyl emission, the average and the 95% of the observed device power outputs (14.7 watts and 31.3 watts) and 95% of observed puff volume (170 mL) from the 23 subjects were used for e-vapor generation. The variable device power outputs were achieved by changing the battery voltage with fixed coil resistance (0.8 Ω).

The sampling and analytical protocols for carbonyl measurements were developed based on the U.S. EPA compendium method OA-11A [40]. In brief, the sampling system was composed of a LXe1 smoking machine (Borgwaldt KC Incorporated, Hamburg, Germany), a sampling chamber, a 2,4-dinitrophenylhydrazine (DNPH) cartridge (Waters, Milford, MA, USA), and a vacuum pump (Figure S2). E-vapors were generated using the smoking machine under the experimental conditions described above and specified in Table S3. The generated e-vapors were directly introduced into the 2 L sampling chamber. The inlet of the DNPH cartridge was connected with the sampling chamber, and 30 puffs of e-vapor were collected using the DNPH cartridge with a sampling flow rate of 200 mL/min. After sampling, both ends of the DNPH cartridge were sealed, and the cartridge was stored in an aluminum zip lock bag at 4 °C until analysis.
The sampled DNPH cartridges were then eluted with 4 mL of high-performance liquid chromatography (HPLC) grade acetonitrile (ACN, Sigma-Aldrich), and 20 μL of the eluted DNPH-aldehyde derivatives were injected into the HPLC/UV system (a Perkin Elmer Series 200 HPLC and a Perkin Elmer 785a UV/vis detector, Perkin Elmer, MA, USA) which was equipped with a Waters Nova-Pak C18 column. The mobile phase was programmed as follows: after holding 100% of solvent A (H2O, HPLC grade, Sigma-Aldrich,/ACN/THF [tetrahydrofuran, Fisher Scientific, Hampton, NH, USA] = 6/3/1) for 4 min, the mobile phase was changed to 100% solvent B (ACN/H2O = 6:4) over 20 min, then 100% solvent B was held for 10 min. The mobile phase was set to a constant flow rate of 1 mL/min and the UV detector was set at an absorbance wavelength of 365 nm.
Calibration curves for the nineteen carbonyls were prepared using purchased DNPH-aldehyde analytical standards (ResTek, Bellefonte, PA, USA) and five carbonyl standards prepared in our lab (Table S3). For the preparation of these five carbonyl standards, glyoxal (40%) and vanillin (99%) were obtained from Sigma-Aldrich. Cinnamaldehyde (≥98), diacetyl (99%), and acetylpropionyl (97%) were purchased from Alfa Aesar (Haverhill, MA, USA). To prepare the standards, known amount of the five carbonyls were spiked into the DNPH cartridge and eluted with ACN. Limits of detection (LOD) and limits of quantification (LOQ) were three and ten times the standard deviations of the standard with the lowest concentration (n = 7).

3.1. The Impact of E-Liquid Base Materials and Power Outputs

3.2. The Impact of E-Liquid Base Materials and Power Outputs

3.3. The Impact of Vaping Topography

E-vapor carbonyl levels vary under different vaping conditions and product materials. Higher carbonyl levels were found for PG e-liquids, higher power outputs, and top coil settings. PG-based e-liquids under 31.3-watt generated approximately 2.6, 11.2, and 200-fold higher formaldehyde, acetaldehyde, and acrolein than VG e-liquid under 6.4-watt. Despite the fact the FDA has announced a guideline that regulates e-cigarette flavorings for e-cigarette devices targeted to minors or marketed to target minors [63], our results are still useful because there is still huge flavored e-liquid market deemed to not target youth. It is worth mentioning that the flavored e-liquids that are not being sold after the guideline implementation (e.g., JUUL pods except for tobacco and menthol flavor) could always come back onto the market when the vendor meets the standards set out in the premarket authorization [63]. Our findings suggest that upper limits of e-cigarette power output need to be provided for different e-liquid compositions and coil types to minimize carbonyl emission. In addition, other potentially harmful carbonyls, diacetyl, vanillin, and cinnamaldehyde, were identified from the flavored e-liquids. Furthermore, flavored e-liquids changed the profile of carbonyl formation. However, the impact of flavoring chemicals could not be satisfactorily explored due to the limited availability of product content information. Future studies, therefore, will need to evaluate the impact of flavoring chemicals on the formation of carbonyls formation and the inhalation toxicity of flavoring chemicals by themselves.

The authors wish to thank Cancer Institute of New Jersey, New Jersey Health Foundation, and National Institute of Environmental Health Sciences (P30 ES005022) for funding this study, and all study participants for their support of the study. Contributions by OW were supported in part by K01 CA189301 from the National Cancer Institute and the FDA Center for Tobacco products. The content is solely the responsibility of the authors and does not necessarily represent the official views of the funding organizations. 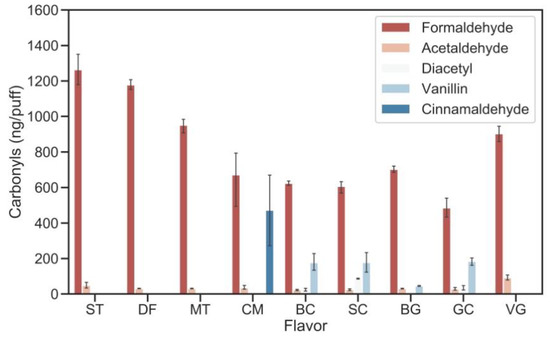 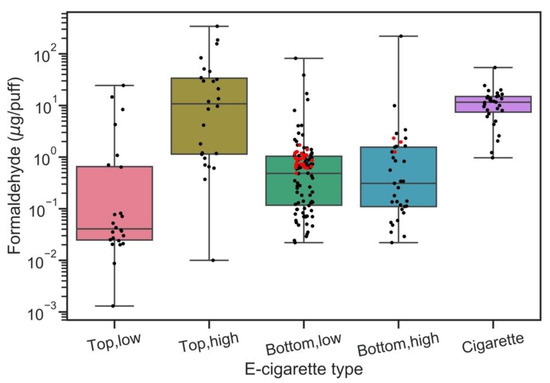